Vampyr is an enthralling action role-playing video game developed by Dontnod Entertainment in which the player assumes the role of the recently turned vampire and prominent surgeon Dr. Jonathan Reid as he traverses London during the Spanish Flu of 1918, curing (or killing) anyone who crosses his path. With its gloomy and gothic atmosphere and gameplay focused heavily on unlocking the mysteries and stories of the NPCs who inhabit the game world, Vampyr plays like an interactive novel that rewards players for spending time talking with characters dealing with not only the terrors of the Spanish Flu but also a mysterious vampire plague turning everyone into bloodthirsty lunatics.

The game isn’t perfect and boasts insanely long loading screens, but it excels at crafting a cast of characters players come to care about, even if they do decide to feed on (and thus kill) any unfortunate soul they encounter. Of course, players can choose to spare the NPCs they meet, but doing so means the game’s combat system is more difficult. It’s a tricky balancing act, especially when many of the characters are full of personality, and killing them could lead to catastrophic results. Regardless of what the player chooses, the characters are still memorable and possess small quirks and personalities that make them stand out from the copy-and-paste NPCs of similar games.

This list is dedicated to the top five characters from the game. I’m not going to spoil their stories or tell you who to kill or spare, and I’m leaving Dr. Reid off the list. Even though he quickly became one of my favorite video game protagonists (or antagonists, depending on how you look at it). His personality, while always polite and somewhat intimidating, depends on the player’s actions.

Without further ado, here are the top five characters from Vampyr. 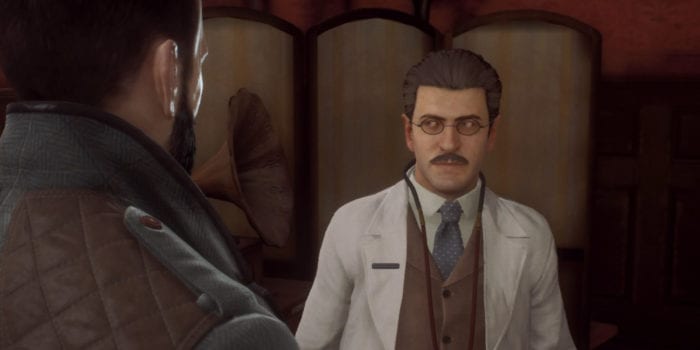 Dr. Edgar Swansea is one of the first characters players meet in the game. Well dressed and possessing only a tiny bit of snobbery, Swansea is the administrator of the Pembroke Hospital, one of the game’s primary locations where Reid conducts his research and cures patients of their many ills. There’s more to this surgeon than meets the eye as he is a member of an organization dedicated to the research of vampires known as the Brotherhood of St. Paul’s Stole.

At the beginning of the game, Swansea is investigating vampire activity and gruesome murders in the East End Docks and quickly recognizes Reid, who’s trying to find the vampire responsible for turning him. Swansea has no qualms interacting with vampires and is excited at the prospect of having a surgeon like Reid among his staff, even if he is undead. Swansea recruits Reid and offers him a hand of friendship in his darkest hour. He’s intelligent and brave, but ultimately proud and flawed, and some of his decisions lead to horrific results for all of London. Still, the two men develop a strong friendship that leads to an interesting intersection of science and the fantastical. Just beware, this bespectacled Englishman is not as innocent as he first appears. 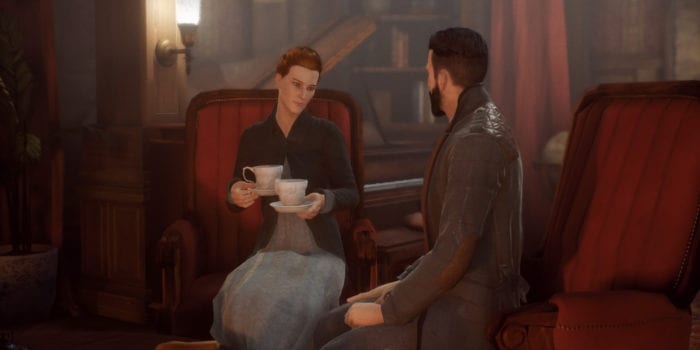 Female love interests in video games tend to become damsels in distress and don’t fare well compared to their male counterparts, but Lady Elisabeth Ashbury, a wealthy and beautiful vampire who only feeds from the dying and falls in love with Jonathan Reid, is no damsel. In her first onscreen appearance (her voice is heard earlier in the game), she saves Reid from a vampiric creature called a Skal by driving a wooden post through its heart. Even though she’s not a playable character, Lady Ashbury is the most essential character of the game and carries much of the plot. She has her own (undead) life beyond Reid, and when the need arises, she jumps into action and carries out her own investigation of the vampire responsible for Reid’s condition. Lady Ashbury never loses her agency, and she proves to be a resourceful ally, making her a memorable and nuanced character.

In a world of bloodshed and misery, Lady Ashbury becomes one of the constants Reid relies on. The pair find themselves drawn together by the tragedy of their undead and eternal existences as creatures who ultimately lose any mortal they bond with, and Lady Ashbury’s kindness brings comfort to a man whose entire life has turned upside down in a horrible way. Their romance is subtle and very Victorian, but it’s still powerful, and the moment they kissed, I found myself cheering. 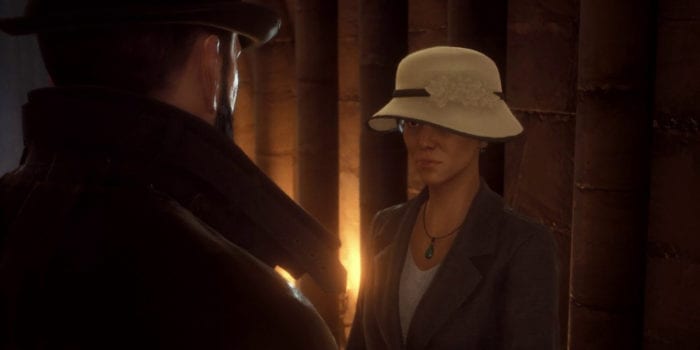 Many of the characters in Vampyr have tragic backstories, and unfortunately, there’s not much the player can do in response other than to lend a sympathetic ear in the hopes of unlocking a quest or hint. Such is the case with Hsiao Shun, a widow whose happy life becomes one of immense sadness after her beloved husband’s death. Compared to some of the other characters in the game, Hsiao Shun is pretty minor, but it’s her story that lands her a spot on this list.

Before the outbreak, Hsiao Shun and her husband lived happy and loving lives, but they underestimated just how sick her husband would become. He quickly dies before revealing the extent of his sickness to his wife, and she blames herself for his death. When Reid encounters her at the Stonebridge cemetery, her grief is so intense she can’t leave her beloved’s grave. Reid is moved by her sadness and reveals the recent loss of his sister Mary. It’s a small scene, but it allows the two characters to explore the depths of their sorrow and connect over the loss of their loved ones. Talking with Hsiao Shun allows Reid to lessen the burden of his guilt over Mary’s death, and he encourages the widow to leave the dangerous cemetery full of roaming Skals and take the first step into healing and closure. 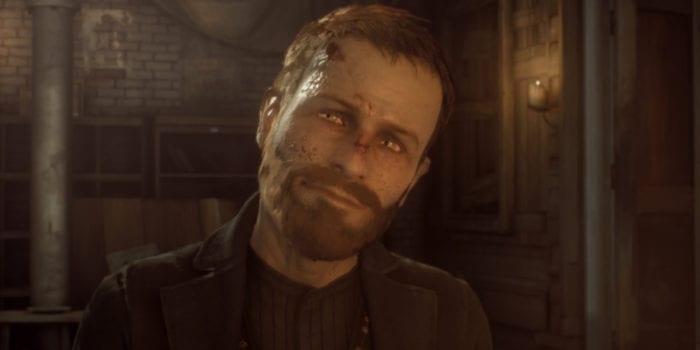 Sean Hampton might be a little creepy and sinister as a Skal, but his faith in God never falters, despite the atrocities that befall him. When Reid first encounters the hapless good Samaritan, he’s being attacked by a man-turned-Skal and nearly dies, though Reid rescues him and brings him to the safety of the Pembroke Hospital. Unfortunately, it’s too late, and Sean becomes infected and begins the transformation into a Skal. Although he’s religious, Sean never formally entered the Church and instead dedicated himself to his night shelter and the people he saved in London’s seediest and most dangerous docks. His kindness and works of charity inspire the locals to call him the Sad Saint, but what makes him unique is his connection to the Skals.

Before becoming a Skal himself, Sean came to know the sewer Skals hiding in the tunnels beneath his night shelter when he encounters their leader, Old Bridget, and develops a relationship with her built and trust and mutual aid. Just like the other Skals, Sean is driven by terrible bloodlust, but he restricts himself to only eating dead flesh, which isn’t great—but at least he’s not feeding on a living human. The player must make a pivotal decision early on regarding Sean, but what makes this character unique is his faith in goodness despite all the tragedy and darkness around him. A lesser immortal man might give in to his carnal desires and unquenchable bloodthirst, but Sean adheres to a strict code, and his terrible circumstances only strengthen his faith. 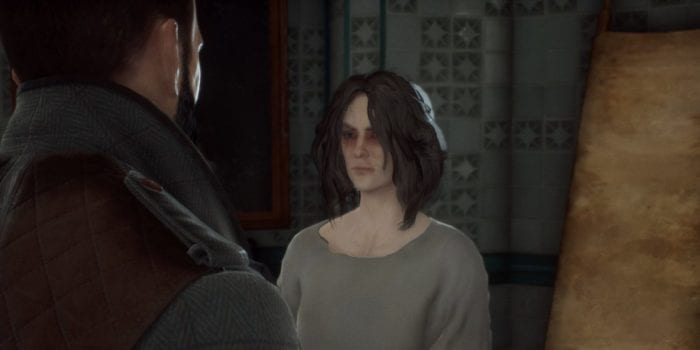 Thelma Howcroft might just be the most unique character of the entire game. She’s a patient at the Pembroke Hospital suffering from Cotard’s Syndrome, a rare condition that makes the afflicted believe they are dead or putrefying. As a result, Thelma believes she’s a vampire and adheres strictly to nocturnal activities. Despite the gravity of her condition, Thelma’s sense of humor and eccentricity bring a little light into the hospital, and I couldn’t help but admire her lack of fear and her inner strength. She’s not afraid of much and very little escapes her watchful gaze.

When Reid meets her, Thelma reveals she’s being spied on by vampire hunters, but this is no delusion. The local gang of vampire hunters, the Guard of Prinwen, mistake Thelma for a real vampire and follow her around outside the hospital. Players can choose to reveal themselves as a real vampire to Thelma and drink her blood, but I kept her alive and made sure her tales of vampirism didn’t leave the hospital walls. She had too much personality to kill, and her dark hair and sharp wit invoked the energy of Helena Bonham Carter, who’d be my number one choice to play Thelma in a live-action adaptation.

Looking for more horror gaming lists? We’ve got you:

“We’re Just Playing: A New Platformer, a Mystery, and a Spooky Horror Game”