The Frighteners was a mega-budgeted, special-effects heavy, large scale, action and horror packed fantasy from writer/director Peter Jackson released in the summer season of 1996. And it died at the box-office. All the elements were in place; the script by Jackson and Fran Walsh wove humour, the macabre, drama, and action around its likable leads, no expense was spared in utilizing the then-state-of-the-art tools available to create arresting CGI VFX which gave the film’s supporting human actors the appearance they were glowing, blue-tinted apparitions. The camera swooped and soared in the air along with the movie’s main baddy creature and the project itself was supported by and executively produced by wunderkind director Robert Zemickis, not more than two years out from his triumph (if you liked it) that was Forrest Gump.

So what went wrong at the box office?

The Frighteners was released at the same time as Independence Day. Universal wasn’t sure how to market it (is it a horror movie or a comedy?) and perhaps summertime wasn’t the right time to release a dark spookster/comedy filmed the year before in grey, misty, muddy New Zealand. Maybe because it starred an actor (Michael J. Fox) more known for comedic roles and maybe the story of a down-on-his fortune paranormal spirit catcher felt a little too close to Ghostbusters terrain. Oh, and Roger Ebert gave the movie only a single star out of four in his review. With a budget of $30 million (Jackson’s highest at the time), The Frighteners only made $29 million back.

So while audiences ignored the film in 1996, it has since become something of a cult hit due to its DVD releases and, no doubt, due to the staggering success of Peter Jackson’s Lord of the Rings and Hobbit movie series which are now among the most popular movies of all time and considered the gold standard for blending fantasy, action, and human elements together. Fans of Jackson sought out his earlier work such as 1994’s Heavenly Creatures starring a very young Kate Winslet and this film, Jackson’s first foray into big-budgets and FX wizardry. 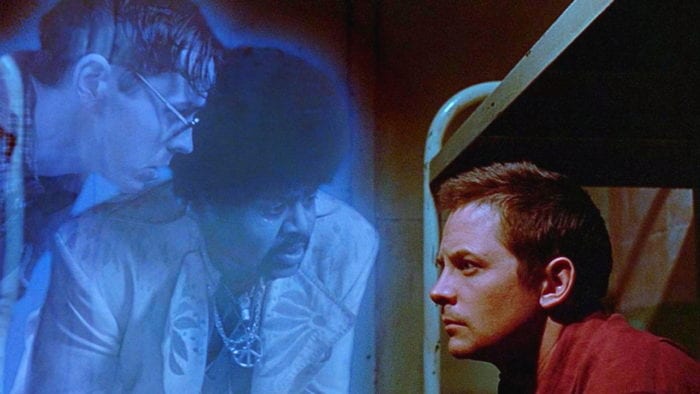 In The Frighteners, Fox plays Frank Bannister, a single guy living in a half-built house on top of a hill. Frank used to be a successful architect until a car crash in which he was involved resulted in the death of his wife, Debra (Angela Bloomfied), five years earlier. Frank was thought to have killed Debra on purpose as the couple was known to bicker due to his heavy drinking. Frank now lives in the unfinished house with his three “frighteners”—apparitions of three dead men who Frank employs to scare the town’s wealthy residents. When the three begin causing damage, Frank is called to come in Peter Venkman-style to clean up the mess. Mainly, he “captures” the poltergeists so they’ll never bother the victims again. Frank is known around the small town as a sleazy, oddball who makes his living preying on family members who have recently had someone close to them die. Since the accident, Frank has gained the ability to communicate with the dead as a guide of sorts to help them adjust to the afterlife before the deceased individual is given a chance to “pass over” into another realm in a year.

Frank lives a solitary life outside his three ghostly entities. There is Cyrus (Chi McBride), Frank’s most vocal critic who died in the 70s and still sports that decade’s fashions. Stuart (Jim Fyfe) is a bespectacled, analytical character and then there’s the Judge (John Astin), the oldest of the spooksters who is drying up, falling apart, and crumbling bit-by-bit with each passing day. The Judge, like Cyrus, has little patience for Frank and his ways. Both urge him it’s time to give up “frightening” but Frank, with nothing else to look forward to, especially as many in town still suspect him for his wife’s death, knows death is his only way to make a living.

Frank accidentally runs into the Lynskey’s or to be exact, he runs into their fence. Immediately the house owner, Ray (Peter Dobson, who is terrific here) takes a huge disliking to Frank and his carelessness. Ray’s wife, Lucy (Trini Alvardo), likes Frank and we see in her scenes with Ray, she’s not happy in her situation with her husband. When Ray, a fitness freak, suddenly winds up dead at 29, Lucy, who knows Frank can communicate with spirits of the dead, meets with him to talk about Ray but it’s pretty obvious she wants to talk with Frank who is finally connecting to an actual, real-life human being (and an actual living one he can touch) for the first time in years.

While Frank and Lucy bond, a malevolent entity, the Grim Reaper, has found its way into town and begins collecting souls at an alarming rate. Because Frank is seemingly present before these citizens’ deaths it isn’t long before fingers begin pointing at him as the murderer, especially when its established the local newspaper has been publishing cautionary stories of him. Only the town’s sheriff (Troy Evans) believes in Frank’s innocence which isn’t enough to prevent Frank from being threatened by FBI-freak, Milton Dammers (Jeffrey Combs in a scene-stealing role).

With The Frighteners, Jackson skillfully balances a lot of elements and his and Walsh’s script was certainly clever enough to get Zemickis involved, along with Fox, Universal, composer Danny Elfman (who surprisingly has never worked with Jackson since as the director went on to choose Howard Shore for his Middle Earth saga) and many of this movie’s other actors. The actors are all clearly having a ball with this work even if Fox was bored to death filming in New Zealand during the summer of 1995 (he would be sent VHS tapes of American sitcoms such as Seinfeld and Friends to lift his spirits. He liked the format so much he starred in the ABC series Spin City two months after The Frighteners opened). 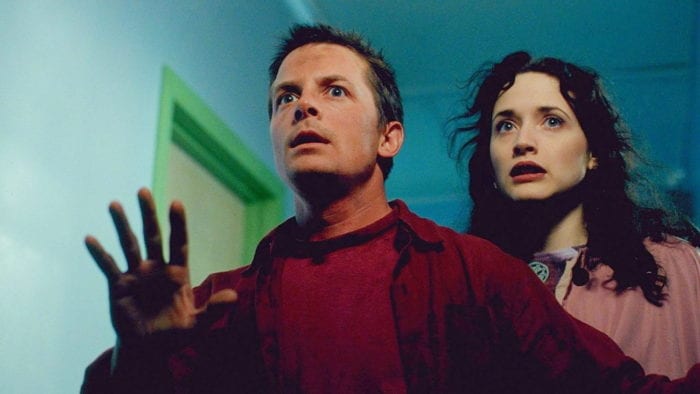 There are some very witty lines in the first half of this movie (Cyrus to Frank: “You get to wear nice clothes while I’m still dressed like Link from The Mod Squad.”) but as is often the case with these types of movies, the conclusion ends up with the good and bad guys chasing each other down a series of murky, dilapidated leaky hallways in old abandoned buildings and then it becomes a challenge to continue to care. However, The Frighteners provides a wonderful moment where Frank *spoiler*—finds himself in the afterworld where Debra wishes him well on a life with Lucy. It’s this scene that saves The Frighteners from its overkill of VFX and untethered flying camera shots amidst rapid editing and Elfman’s crash, bam, thunk music.

The Frighteners was released in two different versions: the two-hour theatrical version and a slightly longer (by 12 minutes) director’s cut in 2005. I like the original cut as there isn’t a lot of difference between the two. There are more moments with Ray and Lucy but because Ray is a character we’re not supposed to like (Dobson sells this lout perfectly) it seems odd to include more of him. Better, though, are more one-liners from McBride as Cyrus.

This summer marks the 25th anniversary of The Frighteners and this December will be the 20th anniversary of The first Lord of the Rings movies. The receptions for those two could not have been more different. The Frighteners died a quick box-office death (it was beaten by the Stephen Baldwin, Laurence Fishburne fugitives-on-the-run movie Fled during its opening weekend). Yet, without The Frighteners there would never have been LOTR hitting screens. Jackson utilized more than two-dozen computers to create the CGI needed for Frighteners and when that film was finished, he knew where he wanted to use those computers next. With the aid of WETA, Jackson’s FX company, they were ready to tackle Tolkien’s world, one which had been labeled by studios as “unfilmable.” Jackson, of course, proved them all wrong and the Rings films are now movie history. The spirit of those movies is certainly evident in The Frighteners. 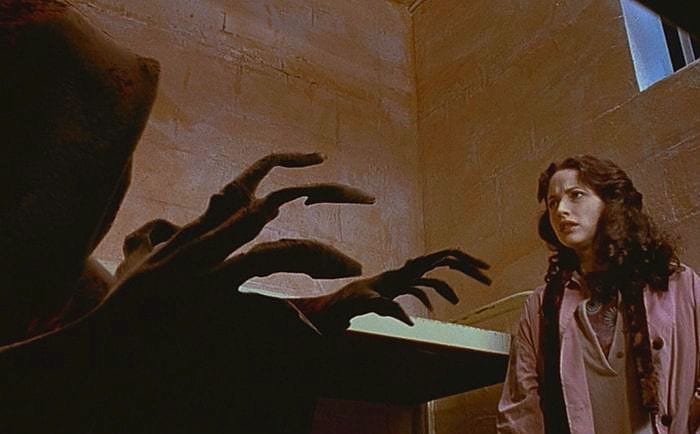 Sadly, audiences were more horrified by The Cable Guy than Jackson’s movie the summer it was released. Had the studio stuck to its plan of releasing it around Halloween instead of in the dead middle of summer…who knows? It’s still a movie Jackson is quite proud of and with new audiences discovering it each year, it’s safe to say The Frighteners will never die.