After experiencing The McPherson Tape (1989) for the first time, I researched the history of its difficult release into the world and I found an interview with the director, Dean Alioto, given to Slash Film website in 2019 where he discusses the genesis of his concept:

“All my favorite directors had made their debuts by that age and I didn’t want to be left behind. By that point, I had dropped out of film school and was just eager to make films. I made a producer who said he wanted to invest $6,500 and I kind of laughed it off and said the only thing I could do for that money is a home video. At the time I had been reading this memoir called Communion by Whitley Strieber, who described his own abduction by aliens. So, I decided to take the abduction storyline and embed it into a home video.”

Alioto crystalizes and maps out the origins and boundaries of the found-footage genre like a living Rosetta Stone. In fact, my entire impression of The McPherson Tape is that it stands as the purest embodiment of everything there is to love in found-footage. Blair Witch was obviously far more successful and impactful, and let me be clear, is a great movie in its own right, and is responsible for the birth of an actual genre, midwife for an entire host of movies.

But…but…McPherson was first and by almost ten years. Watching it now, everything you would expect in light of all the films that came after it is there, the shaky footage, purposefully amateur framing, overlapping voices, minimal scripting leading to naturalistic dialogue, even the perennial demand by characters to “turn the damn camera off!” Everything is already there and McPherson feels like a movie that knows exactly what it is and embraces its limitations, turning them into fantastic strengths.

Alioto lays out his basic plot in the quote above. A family celebrating a child’s birthday is interrupted by the landing of a spacecraft and a home invasion by little green men. Maybe it was beginner’s luck, maybe it was a lack of precedent which left them free to be who they were, but one of the strongest points in the film is its cast of actors (only the director, who plays camera-wielding Michael and Tommy Giavocchini, who plays his older brother Eric, have any other credits beside McPherson). For what is essentially an amateur troupe, they create a convincing performance of fear and confusion, not to mention their portrayal of familial love, care, and bickering, as effective as any I’ve seen in the biggest of found-footage budgets. As a retired colonel in the Air Force, convinced of the tape’s authenticity noted (more on him later): If they were actors, they should get Oscars. 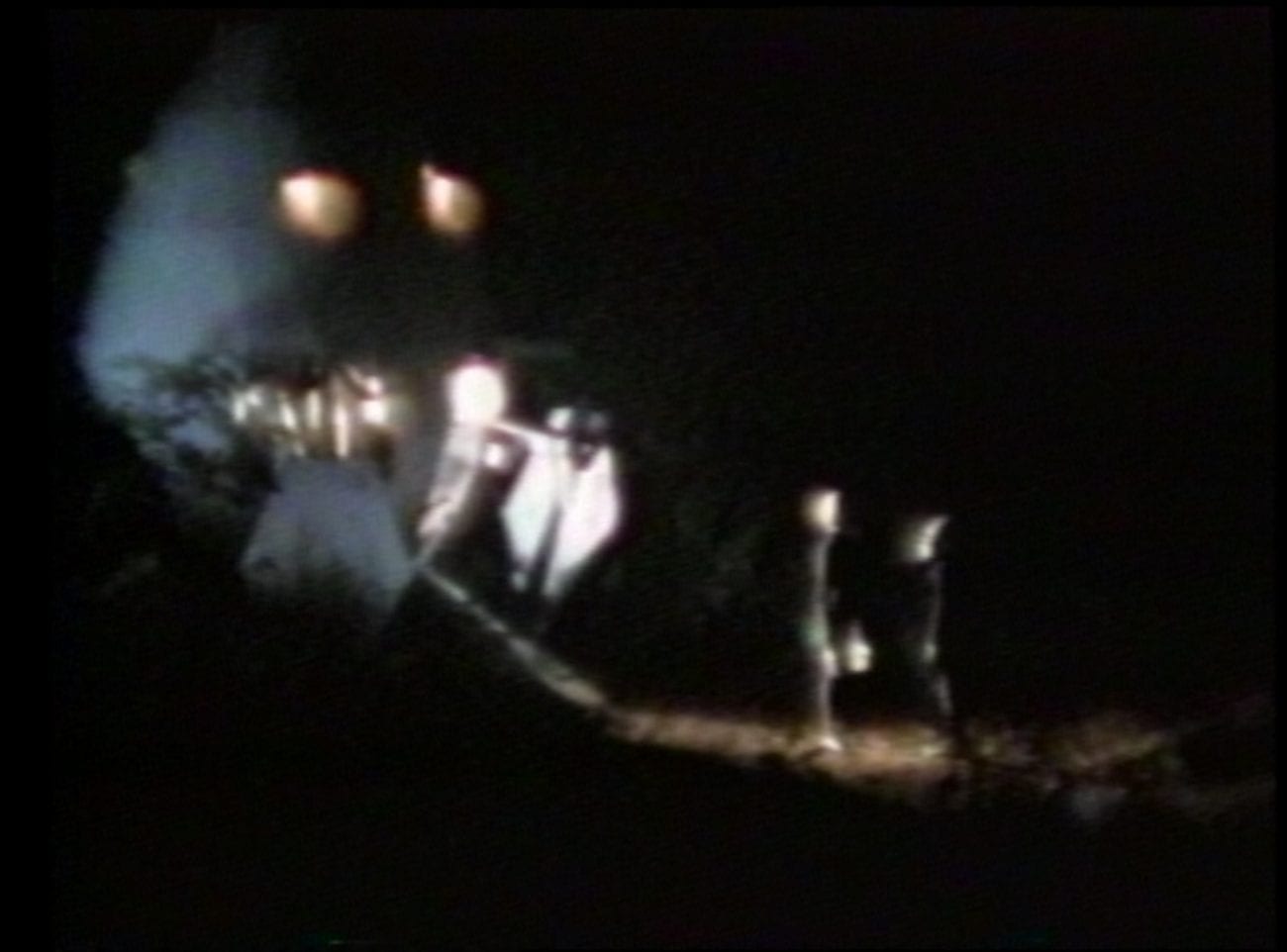 In 1989, VHS camcorder technology was still in its early stages of mass production, used mostly as a prosumer variant by film students and low-budget film producers and in McPherson, Alioto uses its limits and possibilities to maximum effect. Initially, we see a very prominent vignette effect surrounding the picture, I don’t have the technical expertise to know if this is a native effect of the technology or a post-production effect to underscore the “home movie” aspect, though based on my memories of my own home movies I don’t remember such a pronounced ring in even the oldest tapes I’ve seen. It would be interesting if Alioto in fact added this in, an early attempt to increase the realism by introducing a blatantly artificial aspect, an inherent weakness in the found-footage genre.

The low light conditions of the exterior shots lead to moody and memorable incidental compositions. At one point they pass a white van parked in the house’s drive, and between its blurred distance in the background and the fog created by Michael’s breath as he holds the camera, it creates a passable approximation of a marble crypt in a misty graveyard at midnight in any early black-and-white horror. Alioto understands that one of his best tools in the context of low-level technology is the ability to hide the details and low-budget reality in an obvious yet natural manner. It’s hard to see the zipper in the monster’s costume or the wobble of the cardboard tombstones when they are far off in the background, hidden by the shadow of the woods and the auto-zoom of your basic camcorder.

The final shot in The McPherson Tape illustrates Alioto’s command of the film language he was creating as he went. Mother Van Heese (not McPherson—also more on that later) finally yells at Michael to “put the goddamn camera down,” a line repeated several times throughout and almost feels like a touchstone for modern found-footage incarnations, at some point, someone must yell at the camera-person to put the camera down for all that is holy.

Michael complies and puts the camera in the corner of the living room where it lays, tilted but recording, for the remaining minutes of the film in one static, continuous shot. All the actors go to the kitchen just out of our view, though we can hear them talking. Nothing happens for more than a minute until there is a crackling blue light in the back bedroom. Slowly and quietly, the three children actors dressed as aliens walk into the living room. The picture begins to shake with static and interference until an alien turns its head towards the viewer and the picture goes out. 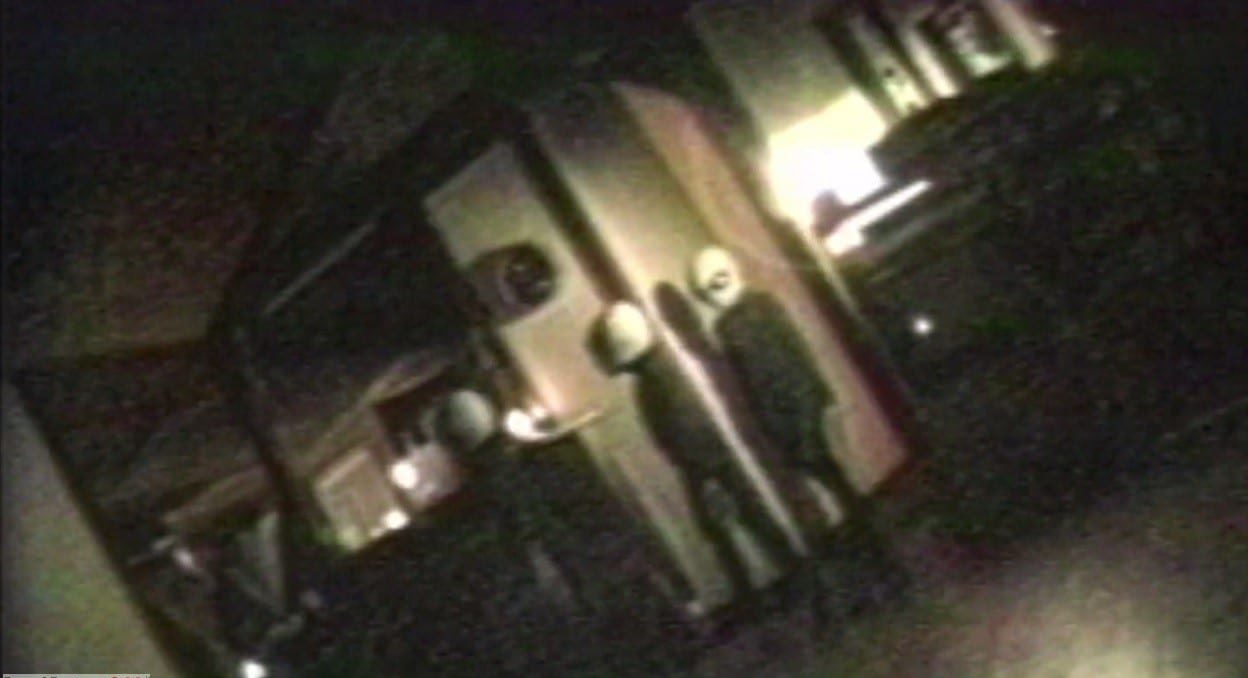 Again, much of the visual language we associate with the modern found-footage genre is already here, fully-formed. Alioto’s willingness to allow characters to wander off-screen, to let the angle of the camera tilt or slide, to simply let nothing happen on screen but the sound of characters in the other room. Instead of tedium, they’re turned into sources of anticipation and tension. Alioto seems to understand without a predecessor, that once the camera becomes a diegetic presence that the story and players can react differently in relation to its eye. It seems so straightforward and obvious now but to contextualize it to 1989 shows it as the brave directorial performance it really was.

The history of The McPherson Tape release is as unusual as the movie itself. Apparently, Alioto had some struggles finding a distributor for his no-budget, essentially avant-garde film. Eventually, a company called Axiom Films (different from the UK production company founded in 1997) agreed to distribute what was then called UFO Abduction, but before a wide-release was managed, their factory set fire and the tapes were destroyed. Fortunately, they had distributed several early copies to video stores as promotional materials and it was from these tapes that the movie was eventually recovered and released through AGFA and Bleeding Skull.

But due to a quark of the promotional materials, namely the lack of credits included on the early tapes, before their rediscovery by the larger film community, copies of the tape began to circulate on the UFO convention circuit as incredible true proof of alien existence:

“I got a phone call for a guy saying that he just found this footage,” according to Alioto, “I kid you not, he actually said that. Then he says that my name came up and describes the movie. I tell him that I didn’t find the movie, I made it. He tells me that he saw it at the International UFO Congress Convention, which is the biggest UFO convention in the world, and that the movie was presented with no credits.”

A television show called Encounters aired a segment debunking The McPherson Tape. That program featured a couple of talking head UFO “experts”, including the Air Force Colonel mentioned earlier, both of whom were absolutely convinced of the tapes authenticity. One expert claims that he believed it because it “fits the pattern (of alien abduction) so well.” A statement that only confirms the work Alioto put into researching alien abduction through books such as Communion and a testament to his goal to make it as real as possible, which he noted introducing his film for its original release, an introduction included on the AGFA blu-ray.

This notoriety led to an offer for Alioto to remake his movie with a million-dollar budget, which was aired on UPN in 1998 as Alien Abduction: Incident in Lake County. The family’s name in this version has been changed from Van Heese to McPherson, thus giving us The McPherson Tape title. Alioto himself appears as an actor again, this time as a special effects man, claiming the tape is real, a move which casts some doubt on claimed frustration at the belief the tape is real, something any director, especially of a found-footage film, would certainly carry a secret pride for.

In another tribute to the, at a minimum, psychological authenticity of The McPherson Tape, there are those who appear to believe it is real to this day. Possibly as a disinformation attempt by the government to stain otherwise incontrovertible evidence. As Col. Ware notes during his appearance on Encounters: “I am not convinced the [Mcpherson Tape] is a hoax because I know our government’s policy is to insert disinformation into every major UFO case…”

I wanted to briefly mention some of the details on the AGFA blu-ray. The disc includes both the original film and the 2017 “director’s cut” version, which seems to include some extended scenes and a clearer picture, though not much is added to the story other than a final scream on the audio track after the video cuts out and some updated credits that honestly take some of the vintage charm away from the original. The extra features are outstanding and include the episode of Encounters mentioned earlier, the introduction by Alioto at the premier, a director’s commentary, and a Q & A from Fantastic Fest.

Watch The McPherson Tape, it’s a special film in the history of horror, it helped invent whole-cloth an entire genre of film-making and Alioto as a filmmaker, made it with no support wires and no history to back him up or educate his choices, which in hindsight look incredibly prescient as to the contours of contemporary found-footage films, he did it himself, all alone in the woods.