Welcome to Indie Horror spotlight! A place to highlight smaller creators who are making fantastic, unique experiences within the realm of horror.

lum (with no capitalization) is a game developer located in Ontario, Canada. He has a unique top-down pixel style with surreal imagery throughout his games. Each game features the same style of combat, and this makes them very easy to pick up. Weapons can be charged to perform a stronger attack, and each has different durability. Safe rooms are located throughout each world, containing save points, an inventory storage chest, and are a safe place to hide from monsters and enemies. All lum’s games feature multiple endings and have an average playtime of about two hours, making them great for a spooky gaming night. 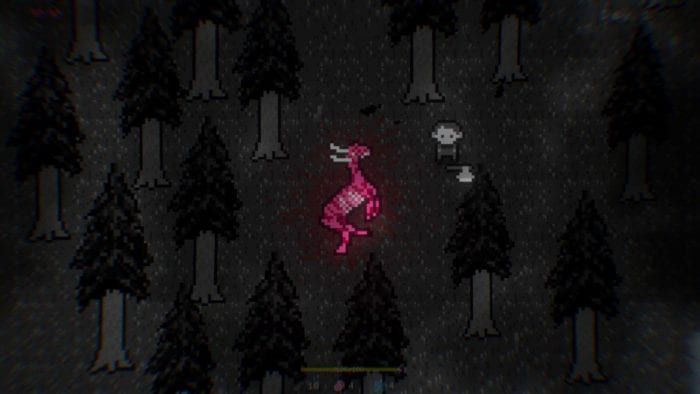 The Devil Haunts Me was originally created for A Game By Its Cover (2018), an annual game jam where devs are challenged to create a game based on a fake Famicom cartridge. Your character in the game wakes up in the woods and must gather resources and hunt to survive. Soon you realize there is something else in these woods. With its black and white palette with splashes of red for emphasis, it’s a tense and atmospheric game.

The Devil Haunts Me is available for free on Steam and Itchi.io, with the option to buy the OST and a making-of booklet to support the dev. 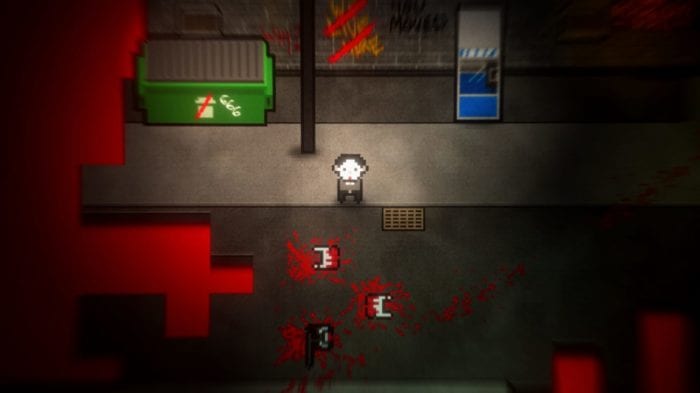 In Paranoihell, Erica is stalked by a mysterious stranger as she makes her way home to her apartment and her girlfriend, Morgan. The city she lives in has become distorted, with horrible monsters and visions of giant moths enter your mind. Hide from demonic cops by hiding in dumpsters and collect coins to spend on upgrades and more inventory space.

Paranoihell is available for 4.99USD on Steam and Itch.io. 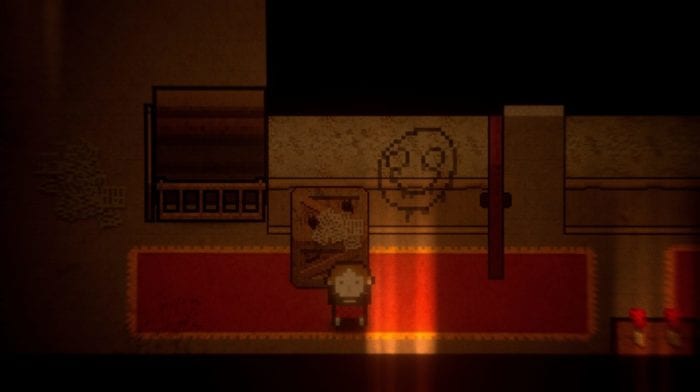 Search Party: Director’s Cut is newly released and expands upon the original game with several new endings and areas to explore. Follow Clarie as she searches for her brother Daniel and finds herself in a house of horrors running from a masked serial killer. Inspired by horror gaming classics like Clock Tower and Resident Evil.

Search Party: Director’s Cut is available for 4.99USD on Steam and Itch.io. A free demo is also available on Steam.

Lor Gislason: Firstly, I just want to say I’m a big fan of your games. I started with The Devil Haunts Me and when Paranoihell released I was so excited. With Search Party: Director’s Cut now out, do you have plans for your next game? Or is it more of a break right now?

lum: Thank you so much! At the moment I’m on a sort of break; I’m focusing on some freelance work and also keeping an eye on Search Party in case people run into bugs. That being said, I have around five different game concepts I’ve had bouncing around that I’d love to work on. I am leaning towards remaking an older game of mine, though nothing has officially started on that yet!

LG: What draws you to the horror genre?

lum: It’s hard to pinpoint exactly what draws me to horror, but it is something I’ve been interested in for most of my life. I’m a very anxious person, and there have been times where I’ve found catharsis in the genre. I think most of all, some of my favorite horror movies have been deeply emotional experiences for me, and art that can provide that is what I like to seek out.

Of course, on the opposite end of that, there is nothing more fun than a really cheap and campy horror movie!

LG: All of your games feature a simple combat system with weapon durability, which I find adds to the tension of the games. Did you ever toy with different systems? What type of combat do you prefer in the horror games you play?

lum: Before I “branded” myself as lum, I used to make a ton of games in Flash, and I experimented with a lot of different systems, mostly top-down shooters, but also adventure games, life-sims, turn-based RPGs, and even Souls-likes. I landed on the current combat system in my games because I liked the confrontational feeling of melee combat and the additional risk management that comes with weapon durability. I’m hoping to expand on it further in a future game.

In terms of what I prefer…I really like anything unconventional or a system where there is a great sense of risk when engaging in combat. Something like D2 or Killer7 comes to mind for unconventional, and Pathologic 2 for risky combat.

LG: Speaking of, What are some of your favourite horror games? Favorite horror movies?

lum: In terms of video games, Resident Evil remake, all the Team Silent-era Silent Hills, Deadly Premonition, and Clock Tower (Super Famicom and PSX) are the obvious and most influential ones for me. I also love Rule of Rose, Echo Night Beyond, D2, Pathologic 2, White Day, Illbleed, anything Puppet Combo, Giraffe Town, Tamashii, Faith…I could go on forever, so I’ll stop there!

In terms of movies, Eraserhead, Society, Dead Alive, Possession, Suspiria (original and the remake), Hereditary, Phenomena, Black Christmas (original)…oh no, I’m doing it again. But broadly, I love movies that are deeply surreal, emotional, or just absolutely campy and over the top. 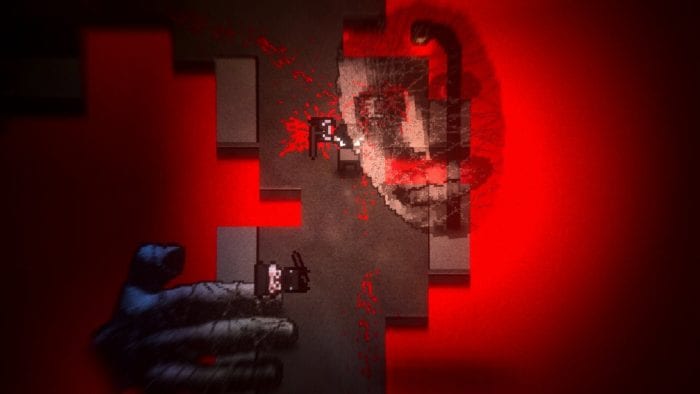 LG: One of the spookier elements in your work are these jittery body parts like teeth or eyes generally around the edges of the screen. What inspired these?

lum: I guess I always associated teeth with my own anxiety. I clench my jaw in my sleep, and I have a lot of bad dreams. To me, that’s an important idea/image in Search Party. The eye is more cliche, but it’s just the idea of being watched. The meaning of the eye I think is more important in Paranoihell because the protagonist is being stalked.

LG: Another feature is multiple endings, which I find rewards the player for exploration. I really enjoy that “I wonder what happens if I do THIS,” and it works. How important is it to have multiple endings in your games?

lum: It’s something I’ve always loved in games when it’s done right. I think the original Clock Tower (Super Famicom) is what really sold me on the concept. It’s done in such a way where the player feels a sense of agency and ownership over the events in the game. Each ending has its own path, and it makes each playthrough feel a bit different. Way of the Samurai 3 also did that concept really well, though I haven’t played it in years. Nier also showed me how more story and lore hidden behind additional playthroughs can add more intrigue to the game, though I’d say there is much less player agency involved in getting those endings.

I think for the current style of games I am making, maintaining this concept is important, though I may move away from the concept if it doesn’t feel right for a new project. 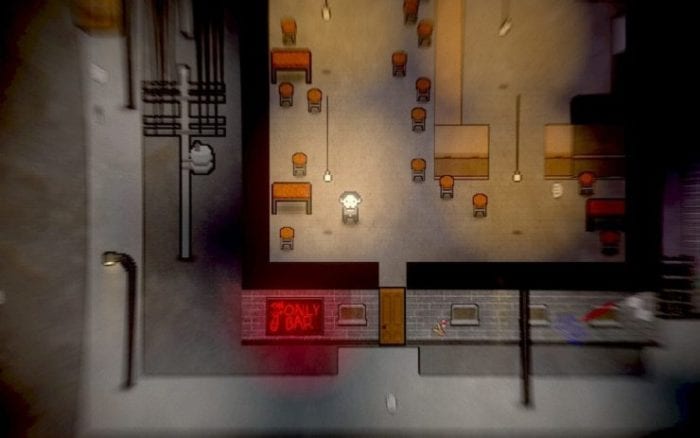 LG: To be honest, my favourite mechanic is the ability to zoom out and survey your surroundings. It’s great to be able to plan ahead and hide from any monsters waiting behind corners. Are there any mechanics you dislike in horror?

lum: It’s difficult for me to think of any game mechanics in horror that I truly dislike; I try my best to keep an open mind to things. I tend to value game mechanics that disempower the player in interesting ways. I guess something that I really dislike with the Resident Evil games is that it seems they always go full action power fantasy towards the end, even in the really horror-focused ones!

LG: What is the hardest part of game development?

lum: At the moment, it’s finding the time and energy to work! I do freelance work full time and, while I’m grateful that it’s keeping me afloat during these precarious and scary times, it does eat away at my energy. I try to set aside time on weekends to work, but that takes away from other important parts of life. It actually makes me a little depressed just thinking about it! Someone want to throw a ton of money my way so I can work on my games full time?

LG: Did the main character of Paranoihell, Erica, always have a girlfriend? I find this quite a refreshing aspect, to have an LGBTQ+ hero where their sexuality isn’t the main focus but just who they are as a person. I’m queer myself, so it’s always nice to see that!

lum: I’m glad you appreciated that! I’m bi and identify as queer, and it’s something I really wanted to include more explicitly in my work. I always intended the protagonist of Paranoihell to be queer in some way; it’s a game that’s, thematically, really personal to me because it deals with a lot of fears I had when I was in my early 20s and drinking a lot.

LG: I’m getting into spoiler territory here, but across your games, several characters and monsters are shown or referenced. Is there an overarching story here or just a bit of fun?

lum: There is an overarching story! I don’t want to get too explicit with details, but I originally thought of Search Party as a prequel of sorts to another game I was working on called Blair Road. I’m hoping to someday finish that, but I’m not too sure when that will be. Paranoihell was always meant as a spin-off of sorts, and takes place in the same “universe” as Ending C of Search Party…

LG: Finally, tell us a fun fact about yourself!

lum: Here’s two: I have a cat named Meg, and I used to play guitar in a hardcore band.

Looking for more on indie horror gaming? We’ve got you:

“Indie Horror I’m Looking Forward to in 2022 and Beyond”