If you’ve read my reviews before, you already know that I love watching a movie that I know nothing about. It leaves me wide open to form an unbiased opinion about the film. Well, I also have a thing about goats in horror movies. When I see a goat, I know some seriously bad things are about to happen. The Dark and The Wicked begins with a whole mess of goats, so I knew I was in for something horrible. I wasn’t wrong.

This Bryan Bertino-written and directed horror film surrounds the story of a man (Michael Zagst) in a dilapidated, rural farmhouse who is dying of some unknown sickness. You may remember Bertino from his earlier films, The Strangers (which I still cannot watch to this day) and The Blackcoat’s Daughter, another incredibly dark and unrelenting supernatural film. So, if you enjoyed those films as much as I did, you know he has an already impressive résumé. Add this movie to that impressive list.

The Dark and The Wicked really begins when the sick man’s daughter, Louise (Marin Ireland), and son, Michael (Michael Abbott, Jr.), come home to be with him and their mother (Julie Oliver-Touchstone) in his final days. However, it becomes quickly apparent that there is something strange going on in this house that goes far beyond mourning.

There are some deeply disturbing religious themes in this film that are unnerving to even the most seasoned horror enthusiast. Let’s take a look… 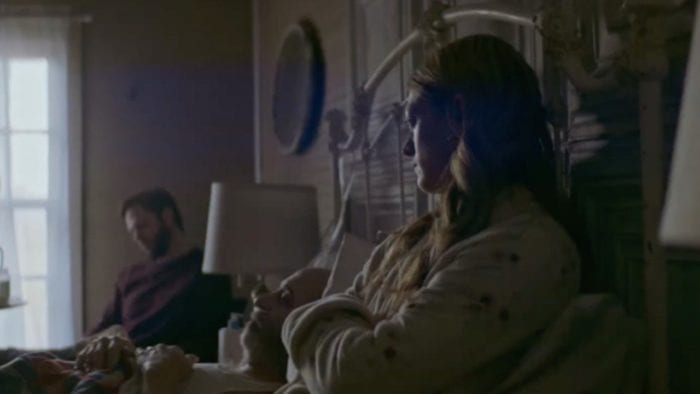 The mother, who it is said repeatedly is not religious and doesn’t believe in God, sits around the house slowly singing the old hymn, “What a Friend We Have in Jesus” at odd times when there is no one around. She also seems to be having conversations, perhaps praying to someone, who isn’t there.

Then there are the goats and sheep themselves. They are a huge part of the imagery of the film and may play homage to the Lamb of God who was slaughtered to be the savior of the world. In fact, there is a scene in the middle of the film where Louise and Michael uncover a clearing on their property where most of their livestock has been slaughtered and they are forced to build a giant bonfire to cremate the animals. The animals are not only killed but then burned in a fire pit, much like the story of Jesus dying on the cross and then descending into Hell for three days. Let’s also not forget that Jesus himself is often said to be the shepherd and his followers the sheep that he gave his life to protect.

A priest shows up at the farm to talk with the siblings. He says that he has visited with their mother many times in the past. However, when Louise tries to call him for help later in the film, he says that he was never there and has never even heard of the town in Texas where the family resides. It would seem that this dark entity has, for some reason, chosen this priest to inhabit and further infiltrate the family.

After the mother passes suddenly early in the siblings’ visit, they go to the morgue to see her body and the medical examiner hands them a bag of small crosses that she had in her pocket. She seemed to be hoarding them. Why? Was she becoming religious now in the hopes of battling this wickedness and saving her husband?

The dying father’s nurse is obviously a religious woman. She stands at his bedside, crosses herself, and is seen praying for him. Yet, she comes to an incredibly grisly end. Are we being told that no one is safe in this house even though good is always supposed to outweigh evil? Are we being told that this entity is something so powerful that good has no chance against it?

I have questions. Obviously, there is something very wicked in this house but where did it come from? Unfortunately, much like Bertino’s blockbuster movie, The Strangers, we aren’t given many answers. What did these poor people do to bring such darkness upon their house? They certainly weren’t selling their souls for a more lucrative lifestyle as both the farm and the family seemed on the verge of falling apart. Why weren’t the children aware of what was going on? Why did the children seem to be estranged from the parents and possibly even each other—their relationship does not seem to be a close one and they seem very put out by having to return to the family farm? The audience doesn’t know and that makes this movie even more unsettling. 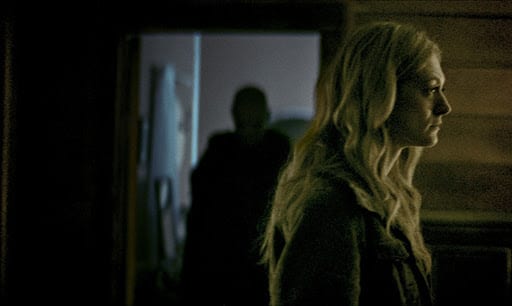 We’re not dealing with an everyday unseen Big Bad here. This is something much more than that. This may be the Devil himself, and as we advance in the story, the outcome becomes bleaker and bleaker. This entity is not going to be happy taking just the father’s soul. He wants everyone, and it looks like he’s going to get them.

The death toll begins when the mother commits suicide after chopping off all the fingers on one of her hands while going into some sort of trance while cooking. Then we lose Charlie (Tom Nowicki), the ranch hand who doesn’t have much of a role in the film except to be another lamb to the slaughter, if you will. One by one, the characters are on the chopping block, and it seems that everyone is losing their minds. Along with the crippling darkness and depression that takes over every one of them come vividly disturbing hallucinations and self-doubt. None of these deaths are easy or emotionally or physically painless. There is some real bleakness to this film that grabs you from the opening scene and shakes your very core until the end. For me, it was reminiscent of 2015’s The VVitch in that way.

Everything about this film is creepy—from the darkness of the cinematography to the incredibly perfect music that makes the hair on the back of your neck stand on end. If you’re looking for a movie that gives you twists and turns and blood and guts, this isn’t your film. This is a well-crafted supernatural thriller that takes its time and builds a body count. This film makes you rethink the general concept of good versus evil and why sometimes bad things happen to “good” people.

I believe I’m a pretty well-versed horror veteran, and this film left me a little rattled if I’m to be honest. The darkness is palpable, and that is just a testament to the brilliance of Bertino as both a director and writer. I cannot wait to see more from him.

The Dark and The Wicked is available for your streaming pleasure on Shudder starting February 25.