Final Destination, the franchise that ruined the way we see log trucks and sunbeds. I have loved this franchise ever since I saw the first film about ten years ago. But that is not to say there are no problems with it.

The Final Destination franchise has, to date, made $665 million in the global box office. It has scathing critical reviews but somehow became popular enough for five films. Full of suspense, comedy, and intrigue, the franchise has loyal fans. They are all based on the idea that you cannot cheat death, with plot-lines that have the ability to be blood-curdling dark.

However, each of the films ultimately shies away from the traditional route of trying to impart as much fear as possible and turns instead to surrealism, comedy, and tacky effects.

There are five Final Destination films, the first from 2000, and the final released in 2011. They each have a similar storyline, but with new characters and situations. The franchise was one of the first horror franchises that I ever got into, and, as someone who is not big on the genre in general, it is the only one that I am still attached to. Despite its comedy/horror genre, I would go so far as to call the franchise somewhat comfort films for me.

I have always been very fond of the Final Destination franchise, but it feels like a guilty pleasure. The turbulent, intense, and genuinely terrifying plot became ingrained in my brain since I watched the first film. The effects and acting, however…there is much to be desired. I find it almost criminal that such a good idea was betrayed by the unrealistic acting, terrible props (I’m looking at you, ketchup blood splatters), and frankly comedic unfolding of the death sequences. In fact, some of the deaths themselves were overdone to the point of comedy.

This being said, to a certain extent I believe this was not only the intention but also part of the joy. It is these wacky, unrealistic deaths that give the films their touch of comedy. Without this, they would blend in with many other underwhelming, unscary ‘horror’ movies.

The premise of all of the Final Destination films is that a central character experiences a premonition that allows them to save the lives of themselves and those around them. However, once they survive the immediate threat, they begin to die in the order they would have done if the premonition hadn’t have warned them. To me, the idea that you might ‘cheat death’ and consequently know that your death is imminent but not know how or when it is going to happen is a truly, truly terrifying premise. Watching your friends die around you and knowing who is next is the stuff of nightmares. 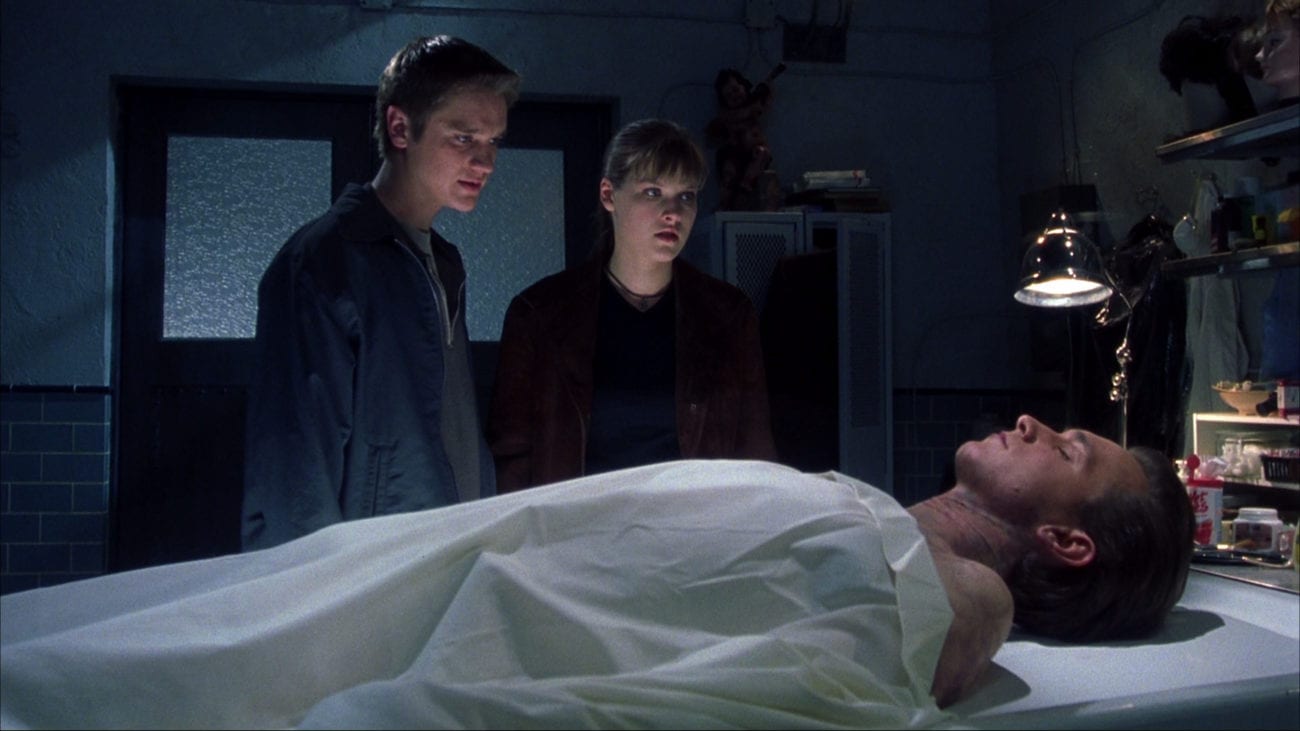 The first film, Final Destination, is my favorite of all. Not because it’s the first, or even necessarily because it’s the best, but because the central tragedy is a plane crash—one of my biggest fears. This really tapped into my personal fears and made the concept much more frightening to me. It actually reminded me of parts of The Omen (1976). Both are films where, when you become aware that your death is approaching, you start to see signs and signals that indicate what kind of accident will cause your death. In both franchises this concept really gets inside my head, scaring me conceptually in a way that I’ve not experienced from any other horror movies.

The other, much simpler reason, that I like the first film the best, is the lack of complications. Because it is the first film, we are not looking for clues or links to the others when we view it, we just watch with fresh eyes and enjoy the story. With some of the later films of the franchise, I found myself getting distracted by the links with other films and sometimes still get a little confused.

The second film, Final Destination 2, ties together lots of details from the first film, and it is revealed that everybody cheating death in the film would have died in the first film, had the survivors of flight 180 never gotten off the plane. As one of the new characters tells Clear (Ali Larter), a survivor of flight 180 in film one, “if you had never gotten off the plane, we wouldn’t be alive in the first place.” This is a very clever link, and we are walked through how each ‘survivor’ from that plane led to one of the central characters in the second film still being alive. Clear says that death is now simply, “tying up the loose ends.” I love this little twist. It was not necessary for the enjoyment of the story but it really makes you think about how clever the storytelling is, and how every day our lives affect the lives of others, including people that we don’t know and may never meet.

The ending of this film gives us a nice cliff-hanger to keep us waiting on the hook for the third film when it turns out the characters who thought they had escaped death had perhaps not been as fortunate as they believed. A few months after the most recent death, Kimberly (A. J. Cook) and Thomas (Michael Landes) are attending a family barbeque, and just as Kimberly realizes that she had the order wrong, another character dies in a freak accident whilst checking on the meat. At the moment that Kimberly realizes her mistake, you feel that cold, tingly sense of dread that comes with all good horror twists.

While cliff-hangers can be frustrating, this one works nicely to lead you into the next movie.

The third and fourth films follow the same pattern—similarly exaggerated death sequences and premonitions—but that somehow doesn’t kill the sparkle. I think, at least for me, this is where the comedy aspect comes in. Although the actual death scenes themselves are seldom as horrifying as stand-alone scenes, it is the wondering over and over what will happen to each character that gets you hooked. And, of course, the perpetual question about whether any of the characters will actually be able to cheat death is fascinating.

The third film ends on a similarly suspenseful hook as the second, but this is switched up for the fourth. I am pleased about this. While in Final Destination 2 it was exciting, once a cliff-hanger had been used to end Final Destination 3, it began to feel a bit old.

The fourth film, The Final Destination, is perhaps my favorite in regard to its plot. About halfway through the film, Janet, one of the characters next to die, gets rescued before she is killed. After this, the others on the list believe that they have all cheated death, but this turns out not to be the case. Because of this, the tension remains even higher than throughout the other films, and the last few moments of it are incredibly well played out. The three ‘surviving’ characters are celebrating their survival, when they realize that, in doing so, they are playing into the plan death had all along.

Cleverly, the events of the final film actually take place first in the franchise, chronologically. There are two ways in which this really works. Firstly, it means that the characters in the film have to work out what is happening to them without the knowledge of those who have survived the phenomenon before. And secondly, it means that at the end, we watch them board flight 180 (the plane that explodes in the very first film), and the events link right back to the beginning of the franchise. This cyclical, linked-up, neat plot appeals to my soul.

Despite visual effects coming along leaps and bounds since the original film, the franchise chooses to cling on to these over-the-top, unrealistic death sequences. While there may have been some artistic merit in polishing these up, by the time clear, hyper-realistic effects were widely available, Final Destination was already well-known for its laughable, comedic character demises.

Although I mock the comedy aspect to the deaths of the characters, this is all in good humor. I really enjoy laughing along to them, and manage to do so whilst still enjoying the thrill I get from the genuinely horrific basis of the stories. There’s something so familiar about each film that once you have seen one of them, they become easy watching. Yet, they still draw you in because you want to know what wacky death sequence you are going to see next. Additionally, escaping death is such an innate instinct that I’m sure we all think about from time to time, and so it’s easy to relate and feel the anxiety of the characters.

This franchise personifies death in a way that is unusual. Although never appearing in a physical form, the idea that ‘death’ is not just a concept, but something that can be ‘clever’ and ‘scheming’ is intriguing.

There’s such a strong entertainment value to this franchise, but if you’re after a horror film in the typical sense, you are likely to be disappointed. The genre mash-up almost clashes and can make it difficult to decide what you really think, which leads me to conclude that your enjoyment of these films will strongly depend on your expectations going in. For someone like me (not a huge fan of horror), they’re great and light-hearted; they’re perfect for those who love terrifying concepts but shy away from gristly gore. For the hard-core horror fan? Unless you walk into this expecting comedy, you will be disappointed.

Looking for more on Final Destination? We’ve got you:

Politics graduate based in the UK. I'm passionate about writing so I can usually be found buried in ink and paper. Proud writer for 25YL Media!