I’ll be the first to admit this, vampires are probably my least favourite horror movie monster. I find them overused, formulaic, and just not very interesting. The Count Draculas and Interview with the Vampire’s super posh, Victorian-era British bloodsuckers with a seductive side stereotype does nothing for me. When something unique and fresh comes along that just goes completely in the other direction of that—well, I’m much more likely to take notice. Today I thought I’d go through some of these unconventional vampires and what I like about them. 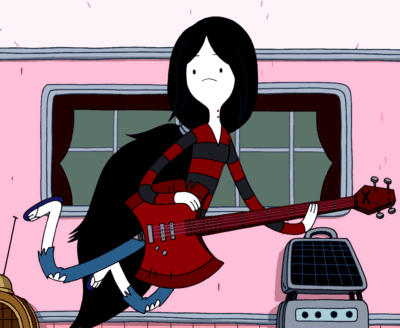 Adventure Time is truly the best combination of themes in a cartoon—whimsical, with a lot of heart and love put into the characters while also dealing with some darker themes sometimes. Marceline is a fan favourite for good reason. She’s cool, a bit of a prankster, and not afraid to show her emotional side. She plays a bass guitar made from her father’s battle-axe! Contrary to what I thought at first (I’m bad at keeping up with shows), Marceline wasn’t born a vampire, but the daughter of a human woman and a demon lord. It wasn’t until later she was bitten by a Vampire King, who she killed and became both the Vampire Queen and also the last vampire in general. From her father’s side she already had a bunch of demonic powers, so to be honest she’s kind of stacked as far as abilities go. Flying, transforming into animals, controlling the undead, and absorbing souls among other things.

The way we’re introduced to Marceline, she kicks Finn and Jake out of their trademark treehouse, showing them she claimed it years ago with a carved ‘M’ on the bark. There’s a bit of a run around as they try to find a new home, with Finn proclaiming how mean Marceline is. She replies (in song) “I’m not mean, I’m a thousand years old, And I just lost track of my moral code.” Which is just perfect and a “well duh” moment. There’s basically no one for her to relate to.

The thing that makes Marceline a bit different from other vampires (and perhaps mainly due to it being a children’s show) is that she doesn’t drink blood—she eats the colour red itself. Strawberries turn white and there’s a cheeky scene of her leaning over a man and the expectation of her sucking his blood is there until she pulls back and it’s revealed she’s just taken the red out of his bowtie. Later on in the series, Marceline also was confirmed to be dating Princess Bubblegum. A pretty pink princess (and resident badass) and a vampire queen? The ultimate power couple. 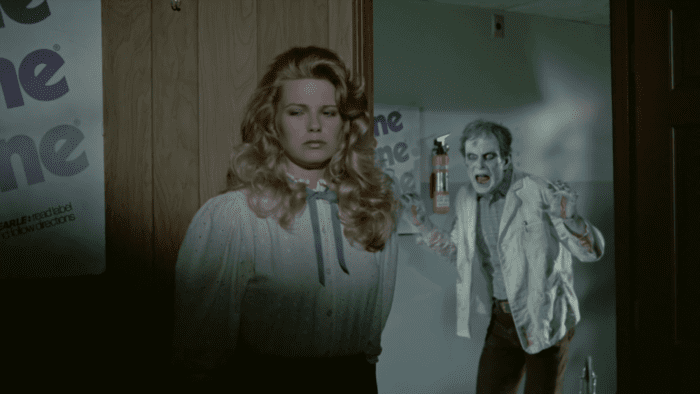 The verdict seems split amongst some descriptions of Mutant as to the nuclear waste mutated humans in the movie are zombies or vampires. I’m personally in the vampire corner. They only suck blood, no brains or flesh consuming here! They also avoid sunlight, preferring to attack at night. Brothers Mike and Josh are run off the road by local rednecks and have to stay the night in a small town, and soon are wrapped up dealing with the titular mutants.

The main attribute to these creatures is the big slits on their palms, that ooze this nasty yellow goo that’s extremely corrosive. They suck the life out of you through these, as well, mimicking a sort of chokehold when they do it. A doctor examines a young girl taken by the ‘disease’ as they call it and theorizes that due to the pressure and buildup of zinc chloride in the bodies it bursts open through the hands. She notes how similar in shape and function it is to leeches’ mouths and also remarks on their increasing need for blood, possibly because of the zinc absorbing it constantly. That could be why they are so aggressive, as well. The victims stay dead once sucked dry. The affliction itself is spread through germs and starts as a simple cold. It’s not a great movie by any means, but I do like that it tried to do something a bit different!

Energy Vampires from What We Do in the Shadows 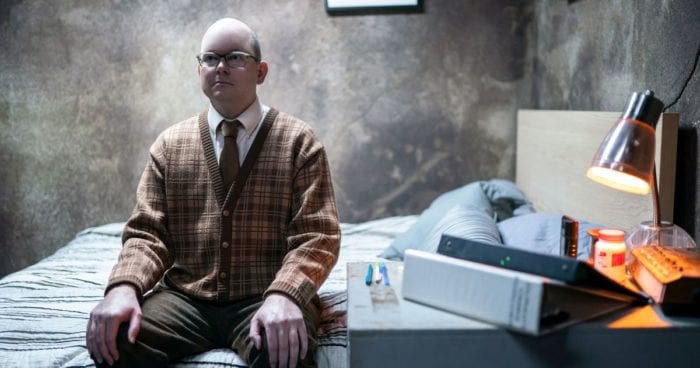 We all know that person who is so insufferably dull they suck the life out of us, and that’s exactly what Colin Robinson the vampire does. He’s the embodiment of soggy bread and doing your taxes for fun. Literally, boring the life out of people is how he feeds. Hunting grounds are wonderfully fitting—offices, city council meetings, churches, and open mic nights. Colin and other energy vampires are unaffected by the typical weaknesses of their blood-sucking brethren and therefore can go out during the day and enter sacred grounds.

Another variation on this is the emotional vampire. Colin meets his match when Evie gets a job at his office and starts hogging all the food (energy). She makes people feel incredibly sorry for her, constantly trying to one-up their stories and playing the ultimate victim. Oh, you think THAT’s bad? Well, my aunt so-and-so from Rochester had cancer five times! That sort of thing.

Colin and Evie eventually have a psychic battle and after a stalemate realize they are both quite lonely and start dating. What feels like a perfect match soon ends as Evie starts telling everyone how terrible Colin is, all to drain more energy. Very clever! Colin breaks up with her after coming to understand this. Maybe someday he’ll find his equally boring vampire bride-to-be. 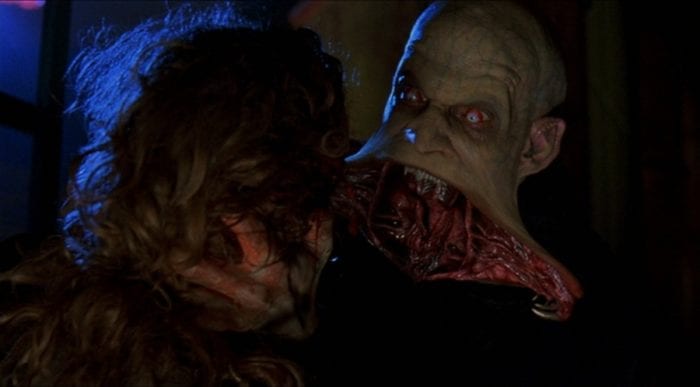 On the complete opposite end of the spectrum, we have the Reapers from Blade II. Created to try to eliminate the weaknesses of regular vampires, they’re monstrous and have an insatiable appetite—needing to feed every few hours and only able to communicate in snarls and grunting. This experiment was a bit of a failure. The only exception to this feral nature is Jared Nomak, the first Reaper. He can control other Reapers like his own personal army. Also, how many vampires are just straight-up named Jared?

A helpful addition to their anatomy is a thick casing of bone, front and back around their chest area, making a traditional stake to the heart almost impossible. They’re immune to silver and garlic and have much more strength than other vampires–still weak to sunlight, though.

The most prominent feature is their three-way split jaw (shown above) opening up the entire lower half of their face. It’s quite a striking and frankly terrifying image! The tongue has evolved to be a sort of proboscis and this is what does the actual bloodsucking and to further spread the Reaper infection.

After a climactic fight scene, Blade eventually kills Novak by stabbing him under his arm and through his body sideways. If they could only get some of the kinks figured out, Reapers would be pretty unstoppable! Maybe next time. Blade III anyone? (Author’s note: I have not seen Blade III.) 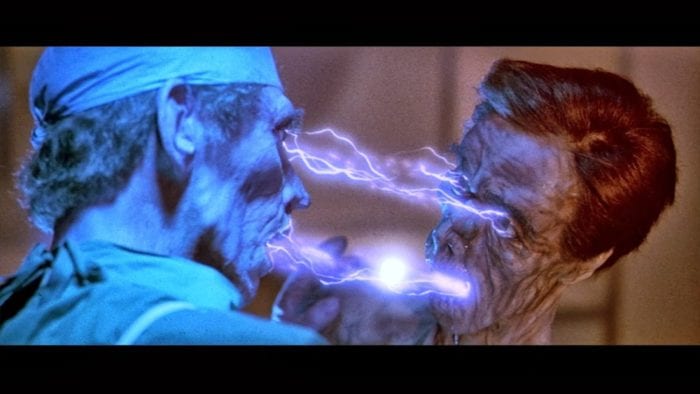 Honestly, I think Lifeforce as a whole is a bit underrated. It’s directed by Tobe Hooper of The Texas Chainsaw Massacre! With a screenplay by Dan O’Bannon of Alien fame! And Patrick Stewart is here! Is it the naked vampires putting people off? Astronauts find a spaceship hiding behind Halley’s Comet and unwittingly release three vampires when they bring the bodies back to Earth. The trio (two men and a woman known in the script as ‘Space Girl’) go on a naked rampage, feeding on humans with dazzling electric effects.

They drain the life force out of their victims, who then rise several hours later with the same ability themselves. Tobe nicknamed these ‘The Walking Shrivelled,’ and apparently, the dummies were later used in the 1999 version of The Mummy. This gives the main vampires a psychic connection, and they can body swap and proceed to do so when they’re blown up with grenades. The energy-sucking rapidly takes over most of London as more and more are infected. Space Girl is the leader of the group, and the men transfer their energy to her, and she transfers it to the spaceship. For later use, I imagine. Maybe their spaceship doubles as an energy refrigerator.

The main characters find out this is a regular thing and that the vampires are using Halley’s Comet as a sort of piggyback ride to come to Earth every orbit and feed, leading to the vampire legends of old. I quite like this idea that our mythology is based on aliens visiting us and our trying to make sense of it. The astronaut who found them in the first place, due to his connection with the vampire woman, impales himself, killing her as well and causing a huge explosion. Gotta go out with a bang!

Definitely one of the things I love about the horror genre is that it is open to so many different interpretations. So, while vampires may not be something I go for when picking a movie, it’s uplifting to see classic monsters still have new stories to tell.

Lor is a horror enthusiast and part-time non profit worker from a small town in Canada who enjoys embroidery and farming games in their spare time.