Search
Public domain image from 12-part serialization of Henry James' novella The Turn of the Screw in Collier's Weekly.

Some of the best art through the years has come from friends hanging out, maybe having a few beverages, and challenging each other to do something epic. One such example is Mary Shelley and the gang hanging out during a stormy night, taking turns to see who could write the scariest story and giving birth to Frankenstein, one of the greatest monster tales of all time. It is a very similar setting we read in the opening of The Turn of the Screw. 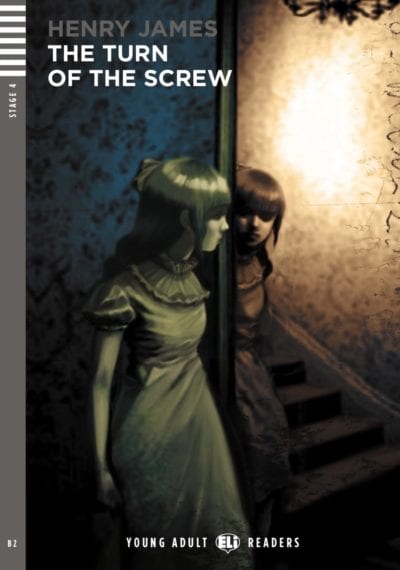 Henry James’s 1898 novella was first published in a serial format in Collier’s Weekly magazine and was classified as gothic fiction. The plot centers around an unnamed narrator and friends on Christmas Eve listening to a friend read from the manuscript of a former nanny who is supposedly deceased. The manuscript tells the story of how she came to be a nanny for two young children at a country house called Bly. The young woman is hired by a mysterious man who is responsible for his young niece and nephew after the death of their parents; however, he has no intention of raising them himself. In fact, after hiring her, he tells her just to do her job and not to contact him for any reason—basically, he hires a stranger to raise his family because he can’t be bothered. Feel the love.

The youngest, eight-year-old Fiona, lives at Bly and is currently cared for by the housekeeper, Mrs. Grose. The older child, ten-year-old Miles, is away at boarding school. While the young nanny is trying to get the lay of the land and understand her role in the home, Miles returns to Bly for the summer unexpectedly. The nanny soon learns he has been expelled from school. He won’t discuss the matter, and she doesn’t pry as she is charmed by him.

With Miles’s return comes the presence of two ghosts. This is the beginning of the question as to whether these ghosts were attached to Miles at some point in his life and why. These apparitions wander the grounds of the estate and seem to be the figures of a man and a woman who Mrs. Grose identifies as Miss Jessel, the previous nanny, and the former groundskeeper, Peter Quint. The nanny learns that Jessel and Quint had some type of relationship and spent a great deal of time with Flora and Miles who seem to be aware of their continued presence.

The terror ramps up when Flora is discovered missing while Miles is playing music for the nanny. Mrs. Grose and the nanny search for her and find her resting on the shore of a nearby lake where she seems to have been communicating with Jessel. Mrs. Grose immediately whisks Flora away to her uncle’s house (who we can assume is going to be none too happy about the intrusion) and leaves Miles and the nanny at Bly. Quint appears to the nanny who tries to shield Miles from the apparition. She assures Miles that he is not controlled by the ghost and with that, Miles drops dead in her arms.

This enigmatic novella has been the subject of much speculation and great art. It has been adapted into numerous projects including radio dramas, stage productions, the 1961 film The Innocents, and a 2020 adaptation called The Turning, as well as a highly lauded Netflix miniseries The Haunting of Bly Manor. These projects focus on various aspects and themes hiding in the story, but possibly the theme most focused on is that of mental illness. In particular, the mental instability of the nanny and how that may have affected the children in her care.

Many critics and producers alike have considered if the ghosts and gothic themes of the story were simply in the nanny’s mind and not part of the manor at all. Many have studied the structure of James’s novella. Many use the introduction and the first-person narrative of a now-passed nanny (we aren’t told how she passed, and there is a heavy implication that she may have either died of suspicious circumstances or perhaps taken her own life) as evidence of her mental deficiencies. James himself has said that while he did not subscribe to literature’s stereotypical ghosts, he preferred to write of supernatural entities who were more of an extension of reality. This may point to mental illness as being the “supernatural” entity that is the extension of this nanny’s reality and the embodiment of her illness. This concept leads viewers to a deeper kind of horror—the horror of losing one’s mind.

The idea of the nanny’s mental illness leads us to question Miles’s death. James doesn’t give us a lot of details regarding his death, just that he died in the nanny’s arms. From this lack of detail, I surmise that James wanted his readers to come to their own conclusions. However, I wonder about two possible scenarios: was the nanny’s proclamation that Miles wasn’t controlled by Quint’s ghost an exorcism of sorts that left him dispossessed and unable to continue living, or did she somehow kill him? We aren’t given a ton of backstory on the nanny except that she is a sheltered twenty-year-old woman with very little life experience. This job caring for two young children has put an enormous strain on her, which may have led to her mental demise. She is said to be intelligent and sensitive though emotionally volatile. Through the course of two interviews with her employer, she has fallen in love with him. This seems to add credence to her emotional vulnerability.

But why the Christmas narrative frame? For me, this device adds a couple of possible layers to the story. One, setting the tale during Christmas in the midst of a gathering of friends storytelling adds a quaintness as well as the chill of a good spook—think sitting around a campfire telling creepy stories and the bonding that brings as well as the laughter and comradery brought from scaring each other. This device adds a distance between the reader and the narrative that allows the reader to make his/her own decision on if the tale is true or just a “campfire” story.

Second, the Christmas holiday can be difficult for many as far as mental health is concerned which takes that possible theme deeper. The idea of friends gathering may also bring a sense of sadness for those who aren’t in attendance and may have gone on. This adds another level of darkness.

The ambiguity of the text is frustrating to some readers and critics alike, and we will never know the answers to some of the most burning questions that readers have surrounding the novella. However, I feel that is the beauty of the book. James leaves it up to the reader’s mind to make up his/her own conclusion and find a true, personal terror inside.