One of the best parts of the holidays (at least for me) is revisiting classic Christmas films with my family. When I still lived at home, we watched White Christmas every year. More recently with my partner, we watch Elf. So what makes a Christmas movie? Does it have to be about the holiday? I don’t really think so. There are many movies that take place during the season that aren’t about Santa and everything else that goes with it. Die Hard is a celebrated Christmas classic, even a special ‘ugly sweater’ edition Blu-Ray.

So maybe this line of thinking brought me back to a movie I haven’t visited in quite a few years, whose climactic final scene takes place on Christmas Eve. I’m talking about The Mothman Prophecies.

Throughout the movie, John Klien (Richard Gere) and other characters have dreams and encounters with a mysterious being called Indrid Cold, who tells them cryptic prophecies that people are going to die and correctly guesses what John is holding when they have a phone call. I love how vague this is, and found the phone call scene terrifying the first time I watched it. Something about the voice and the underlying implications gets me deep in my core. What other powers do they have? Are they causing the deaths or are they just the messenger? What does this have to do with the Mothman? Gordon (Will Patton) sounds like he is having auditory hallucinations, but once he tells John about one of them in which 99 will die, and then a plane crashes and exactly 99 people perish, he believes him. 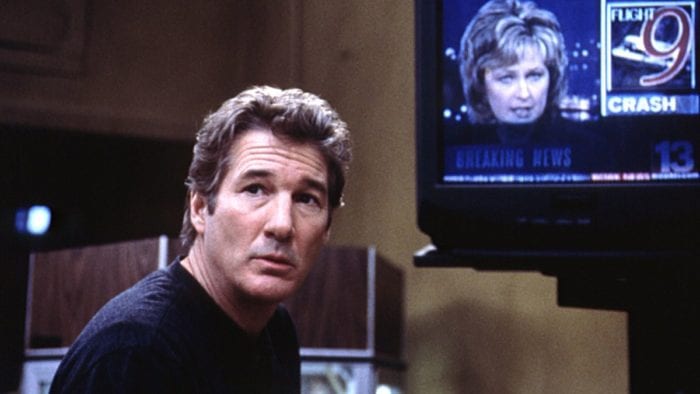 Indrid tells them that something horrible with soon happen on the Ohio River, but they misinterpreted this to be when the Governor visits a chemical plant along the shore. Nothing happens, and John goes home, confused and still kind of obsessed with the strange incidents. After his wife died, he found drawings of a black shape with glowing red eyes. This eventually leads him to Point Pleasent in the first place to investigate the Mothman rumors. Maybe his obsession is due to this being the one final link with his late wife. He’s conflicted, torn from clinging to the past or living his life. Officer Mills (Laura Linney), a woman he has started to have a connection with, convinces him to drive back to see her.

It’s Christmas Eve, and predictably everyone is trying to get home. Traffic is a nightmare as you can probably imagine, with the bridge a gridlock. Families with their cars full of presents and annoyed commuters line the streets. Mills is on one side of the bridge, and John pulls up to the other. He gets out and has a terrible realization—the prophecy wasn’t about the chemical plant, it was this.

We get some wonderful establishing shots before all hell breaks loose, literally. The beams on the bridge begin to snap and a cable whips out and strikes the man in front of John, killing him. The road of the bridge cracks and cars are unceremoniously dumped into the frigid river. I love the variety of shots, with people screaming, lights exploding, long and close shots, it’s got everything. Modern disaster movies could take notes from this. There’s also a strange shot of a woman shopping for bridal dresses, running outside upon hearing the commotion. Why today, of all days? Are bridal shops even open on Christmas Eve? But I digress.

It also features some adorable miniatures, including a full 1/16th scale model of the bridge. Fantasy II effects team took months to create the model cars and set to ensure it would collapse like the real thing. Speaking of the real thing, the events of this movie are based on sightings of Mothman and the actual incident of the Silver Bridge collapse in 1967. The movie actually has fewer deaths than the real event as well (36 in the movie, 46 in real life).

Personally, what stands out to me about this scene and Christmas comes down to two specific shots. In one, John resurfaces from the river with an unconscious Mills in tow. The camera zooms out, and surrounding them are floating Christmas presents that have drifted out of the submerged cars, their lights still on, visible through the water. The other is the sheer mass of emergency vehicles, their bubblegum lights reflecting off shop windows and holidays lights strewn throughout the town. The dichotomy is absolutely depressing in the best way.

While rescue crews begin to extract the cars and people from the river, the survivors are shown shivering and clearly traumatized.  Bodybags lining the shore is an eerie sight. I simply cannot imagine celebrating anything after such a monumental event, let alone Christmas. How many people lost their parents, their children? They’d be fishing debris and bodies out of the river for a long time. Just thinking about that process makes me tired.

While in reality, the bridge disaster happened on December 15th, I can definitely understand moving it to Christmas Eve for this effect. It really adds more impact to the film and moves it away from the real-life tragedy that occurred. Obviously, the bridge was going to fail—it was only a matter of time, but there are not many days that have the same frantic energy and the sheer amount of people traveling as the 24th of December.

While the movie states, “The cause of the bridge collapse was never fully determined,” that’s entirely false. We know exactly what happened. A single eyebar in a suspension chain, with a defect less than one inch deep. It’s wild to me how something so small could cause such damage and ruin so many lives forever, completely changing how you view the holiday season in general because of it.

The film ends with Mills leaning on John’s shoulder, and it gives me hope that John can maybe begin to heal from losing his wife. Horrible events can bring people together, after all. Recovery is always possible and everyone’s journey is different. Here’s hoping John can make some new memories.