During the late ’70s and early ’80s, a campaign to bring awareness to missing children gave life to the era known as “Milk Carton Kids.” The United States began publicizing these unsolved cases by putting them on the side of milk cartons all across the country. It was a daily reminder to parents that their own children could be taken and be the next cold face on the box. If you’ve ever been to Disneyland, an on-edge parent is definitely not fun to be around. Now imagine it on a much larger scale. The paranoia this created nationwide developed into a sense of moral panic known as “stranger danger,” which in turn birthed one of my favorite films of all time, A Nightmare on Elm Street.

Horror often mirrors the world around it at that particular point in time. It takes something we consider safe and corrupts it, such as a house being haunted or more recently, a Zoom call gone HORRIBLY wrong. In ’84, well, an entire country of parents were in the middle of having a collective meltdown over the safety of their children. However, no matter what lengths they went to, there was one place parents couldn’t protect kids: their child’s mind. 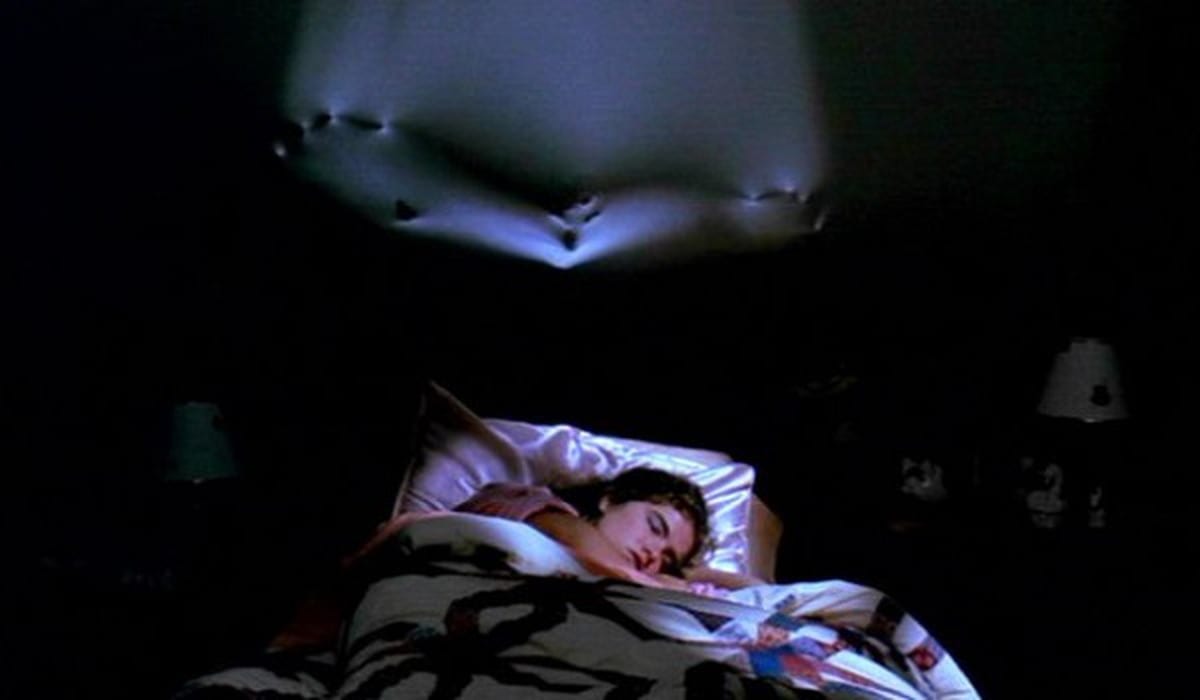 Wes Craven dug in deep to this idea in a most horrific way by attacking America’s teens through their dreams. What could have been scarier to a nation of people right then than a deranged killer coming after their kids in their dreams with his razor-sharp claw-hand? Freddy Krueger wasn’t just the embodiment of our fears at the time; he was an extension of it. He put a horribly ugly face on the mystery man coming to get your kids. Only now, there’s nothing you can do to stop him.

The dreams within each film tell a story of each individual’s own fear. Nancy’s, for example, usually involve her fear of losing people she cares about. Another example is Jesse’s repressed bisexual desires being manifested through Freddy in Nightmare on Elm Street 2: Freddy’s Revenge. Regardless of their context, I definitely have some strong opinions about which dreams in particular are my favorite in the series. Some are frightening, some are just downright goofy, and all of them are important to the story. Using brilliant set design and even better special effects, each nightmare comes to life in new and horrific ways. With that in mind, let’s take a look into which nightmares are favorites of mine.

Hey Nancy, no running in the hallway 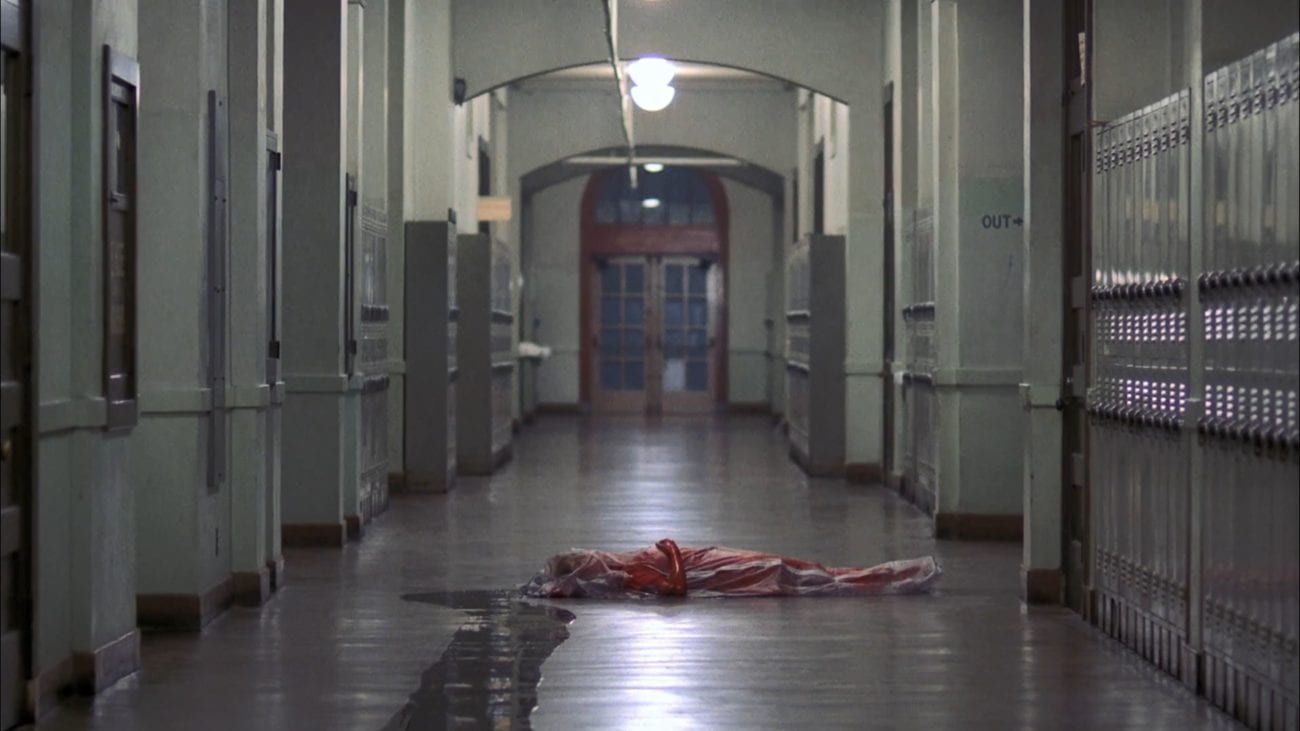 Nancy Thompson (Heather Langenkamp)’s dream following the death of her best friend, Tina, is often regarded as the best scene in the series. I’ll take it one step further and say it’s the best scene in horror. It’s a masterfully done creepy, bloody slow burn leading to Nancy and Freddy’s first showdown. Never again was I able to walk down an empty school hallway without thinking of this haunting nightmare. The lasting impression it left on the audience and the horror genre makes it my overall favorite of the series, a statement I think most horror fans would agree with.

At this point in the film, we don’t know very much about Freddy or when he can strike. The rules are still being established, basically. The brutal and grisly murder of Tina is still fresh in Nancy’s mind as she falls asleep during a reading of Julius Caesar in the classroom. She “wakes” abruptly when she hears her recently deceased friend call out her name from the hallway. The unforgettable image of Tina in that bloody body bag burns brightly in my mind even as I write this. An unseen Freddy drags her helpless body down the halls of the school, leaving a trail of blood for Nancy to follow to the boiler room where he waits for her. Then, Nancy has a bone-chilling realization that it isn’t her best friend coming to her for help. Oh no, Nancy—it’s much worse. 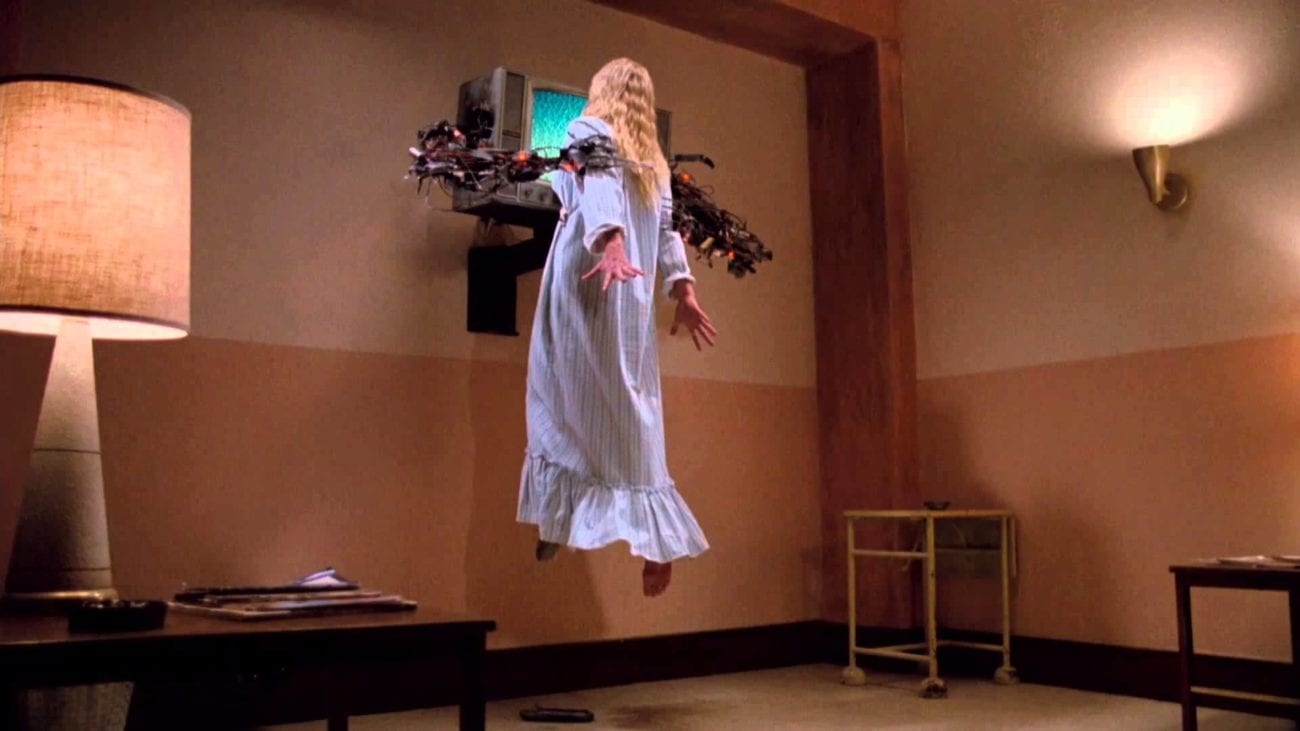 Okay, so, I know Dream Warriors gets some grief because the series took a very large leap here. Some would say it was even over a shark. However, I think it was the logical next step for the series to take. The people wanted more of Freddy and they definitely got it here. Even though this particular dream is much shorter, it’s just as effective. Seriously, it’s Freddy at his most Freddy. Quintessential Krueger, if you will. His twisted sense of humor makes it much harder to root against him than it should, by the way. In fact, his famous line in this scene wasn’t even scripted. It was a line Robert Englund had come up with on his own for the character—further proof that Robert and Freddy are a match made in hell.

Penelope Sudrow’s character Jennifer is just the latest victim of Freddy’s creative ways to kill. You see, Jennifer wants to be an actress on television when she gets out of the mental asylum she has been confined to, which is an admirable goal for anyone on the path of improving their mental health. However, Freddy decides to help her out and give her some screen time by driving her head through the television. A television that his head sprouted from and that grew arms. 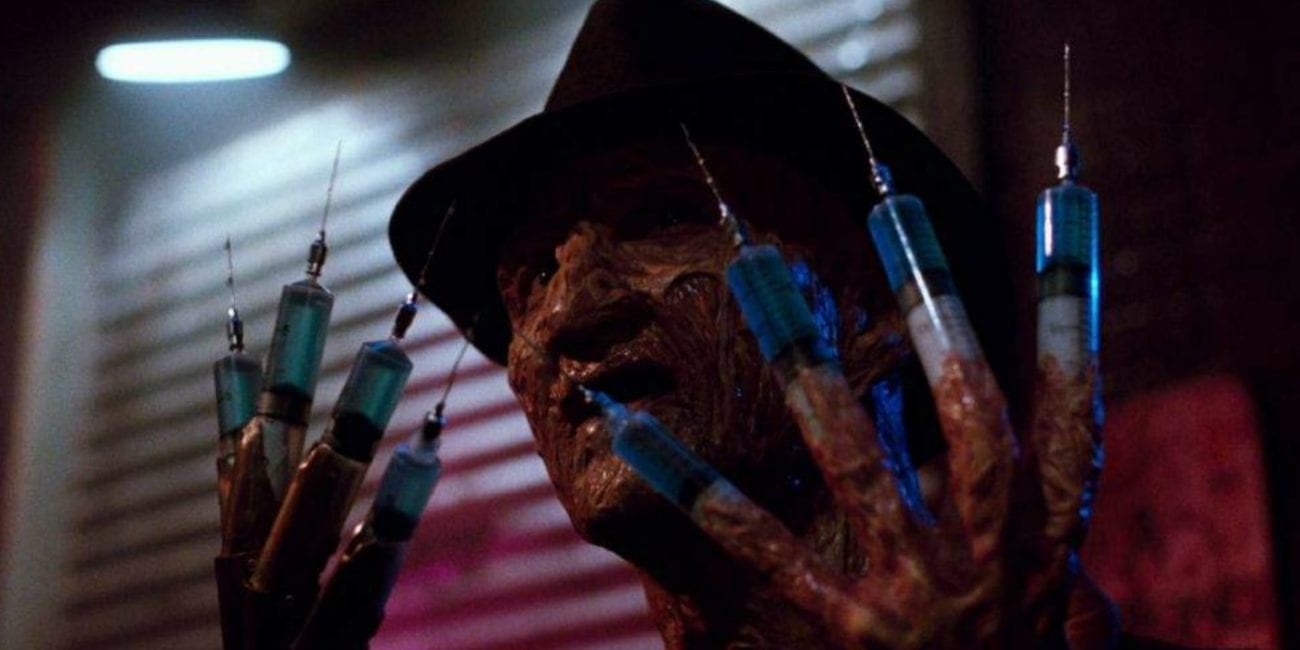 Y’know, for a movie that a lot of people like to hate on, it appears to have a lot of pretty iconic and memorable scenes. This definitely fits both of those categories. In the “Dream World,” you can be anything you want and have any power you want. Taryn White (Jennifer Rubin) reached for the stars and chose to be “badass,” which honestly was a bold choice. Rather than going for the wizard master path, she opted to be a switchblade-wielding punk queen, a role that the actress was clearly very excited about. During the filming of her battle with Freddy, she got a little carried away and accidentally stabbed Robert Englund with a prop knife. The hilarious irony behind that alone puts this dream on my best-of list. By the way, even if it was just a prop knife, it probably still hurts like hell taking it to the ribs.

During this sequence, Taryn and Freddy face off in a knife fight. Taryn with two blades, Freddy with four. We all know how that is gonna go. Even without turning his finger knives into syringes filled with her drug of choice, I don’t think she really stood a chance here. As Freddy fills her with needles and shivers with excitement, he feels the rush from taking another life, proving for the hundredth time that not only does he love killing kids, he’s addicted to it. Don’t do drugs OR start knife fights with Freddy Krueger, kids. Also, If you have trypophobia, you should probably avoid this one. Trust me. 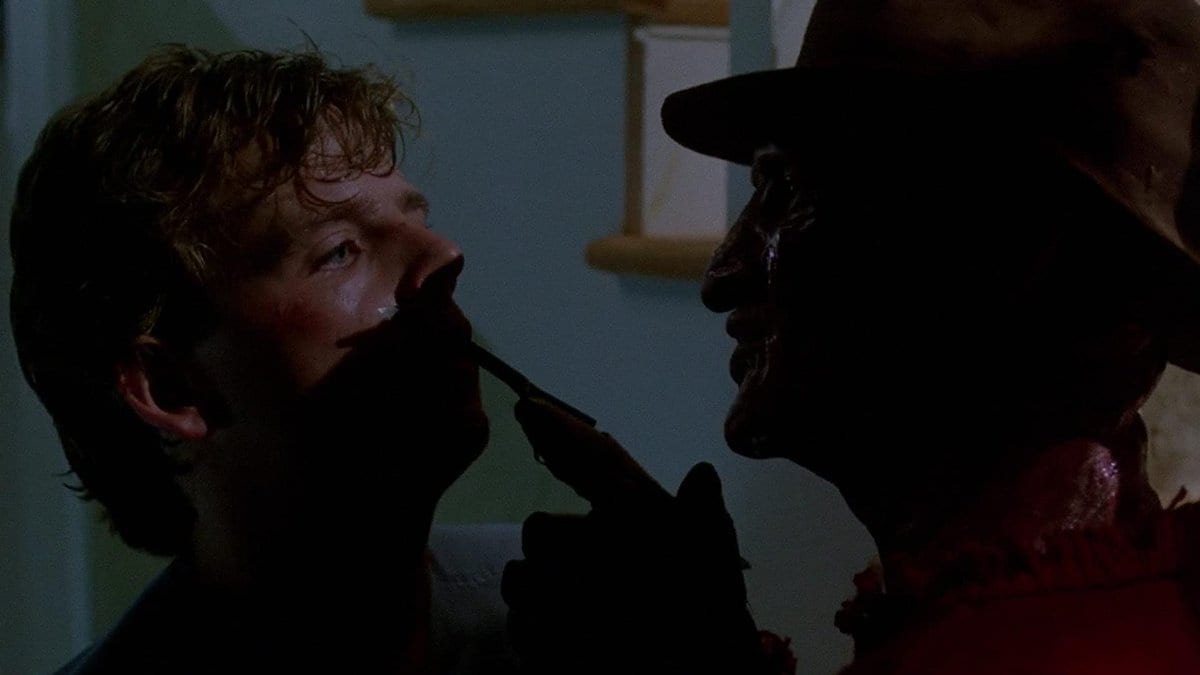 This scene in particular is actually my favorite in A Nightmare on Elm Street 2: Freddy’s Revenge. It has it all: suspense, drama, theatrics, scares and screams. More specifically, I love the hair-raising atmosphere created by Jesse Walsh (Mark Patton) looking into the basement and seeing a shadowy figure standing in the fire-lit room below. Upon seeing this, Jesse tries to slam the door shut and run away. However, Freddy suddenly manifests himself with a creepy can-do daddy-dom attitude. Intentional or not, the very weird sexual tension between them here is definitely something to note. Although the LGBTQ+ themes may not be as in your face as it is later in the Schneider dream, the subtext certainly adds to the mounting evidence that this film is actually the gayest slasher film ever made: a title the film has happily adopted over the years.

Rather than haunt the dreams of multiple kids, Freddy gets up close and personal with Mark Patton’s Jesse. It’s become a pretty polarizing scene due to the homosexual nature of it, a scene that Mark said was actually almost more gay than the one we ended up with. Originally, the plan was to have Freddy stick one of his blades in and out of Jesse’s mouth rather than caressing around his lips with them. It was actually Patton’s make-up artist that stepped in and told him not to do the scene, telling him that it would ruin his image and his career. Sadly, it was an outcome that would happen anyway. 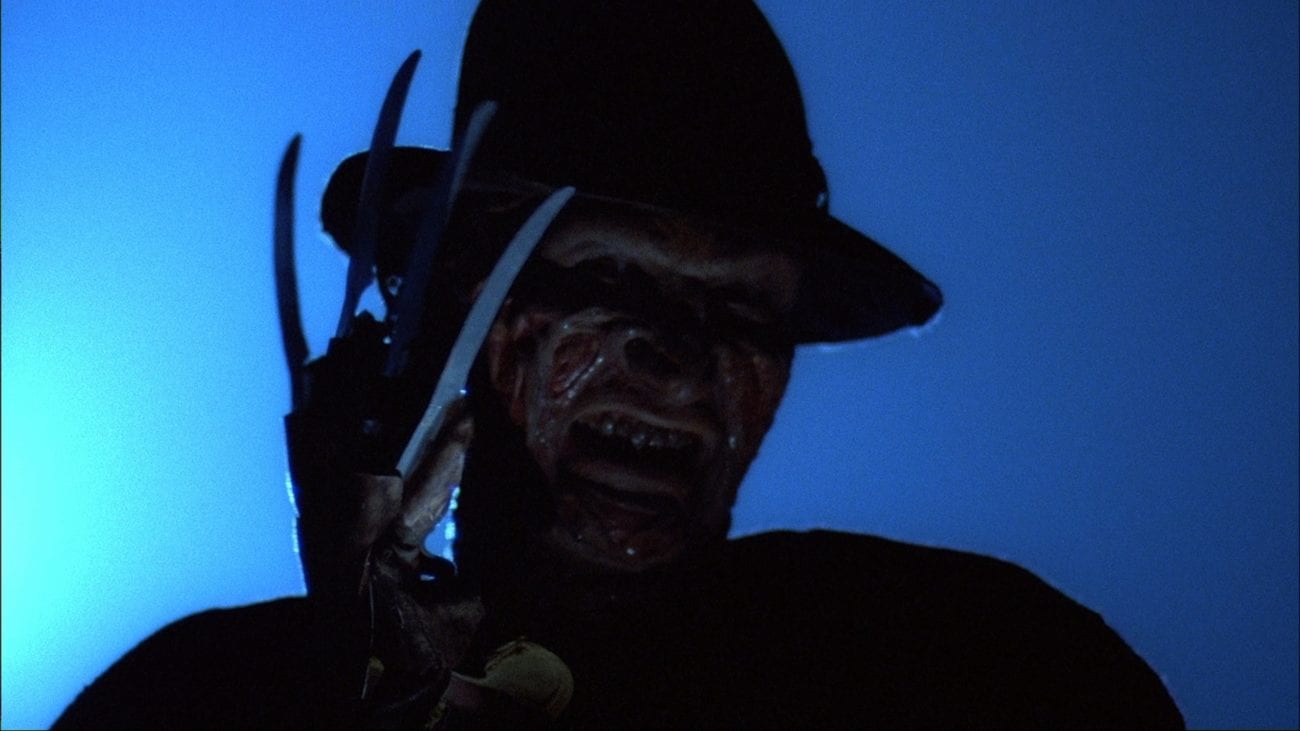 What kind of favorite dreams list would this be without the most brutal slasher death of its time? From the haunting images of Freddy looming over Nancy’s bed to Krueger’s arms comically stretching outward as he shambles toward his prey in the alleyway, all packed within only a couple of minutes, this nightmare is a special effects lover’s dream. It is filled with some of the most terrifying imagery and lines of the entire series. In particular, I am a huge fan of the scene where Tina Gray (Amanda Wyss) grabs Freddy’s face, pulls the skin off, and reveals a much scarier face underneath. Do you know how hard it is to make a face scarier than Freddy’s already terrifying face? It’s definitely not an easy task.

The performances of both actors in this iconic kill scene are incredible. It’s the first time you really see Freddy do his thing, so it’s only fitting that they went all out on making Tina’s death as dramatic as possible. Seeing her thrash around mid-air before being dragged up the wall and across the ceiling is enough to make any horror fan squirm in their seat. I know  Amanda Wyss probably hears this a lot but seriously, horror fans love the way she died.

The Elm Street series legacy is built on the shoulders of everyone who helped create these fantastical dream sequences. The special effects, memorable performances, and cinematography are just the main examples of what made this series so beloved. It will always reign as my favorite horror series specifically because of the creativity involved in making our worst nightmares come to life. Their lasting influence on filmmaking is felt even today. New Line Cinema, who went on to make amazing films like the Lord of the Rings trilogy and the Conjuring series, still call themselves “the house that Freddy built”.

Do you have any particular favorite dreams from the series? Or is my list spot-on with yours? Make sure to share your thoughts with us in the comments below or on Facebook or Twitter. We always love hearing from our readers!