Earlier this year, the sequel to the hit horror film Scary Stores to Tell in the Dark was announced and, rightfully, celebrated. Also, returning for the sequel is the director, André Øvredal. The first film is based on the very popular children’s book series, written by Alvin Schwartz. The story is centered around a group of young friends who find an evil book that has the ability to bring their greatest fears to life. Øvredal has remained tight-lipped on any information on the sequel since the announcement.

However, in a recent interview with Collider, he gave a little bit of insight into the anticipated film: “Production-wise we’re in a holding pattern, but not really because we’re just developing the story and the script, which is a time-consuming process because there’s no point in making a sequel to that movie unless it’s elevated, and it’s great, and it’s ideally better than the first movie,” he said, adding:

I learned so much on Scary Stories, but also about Scary Stories and I do think that we’ll tap even more into [illustrator Stephen] Gammell’s visual world in the sequel than we did in the first movie. 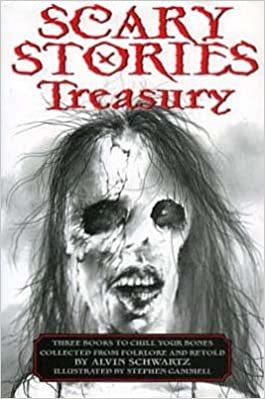 Fans of the series applauded the first film for its use of Stephen Gammell’s famous illustrations. His grim and twisted artwork has long been a staple of the series. Despite his art helping the book make the banned book list at #1 in the ’90s (and remaining in the top 10 in the following decade), it has remained popular in the horror community for decades. His art has terrified and influenced artists within the genre far and wide.

In a recent republishing of the book series, Gammell’s artwork was replaced with a more conservative style approach. The move was the subject of a lot of anger and disappointment. It’s also a creative decision that producers of the film probably realized they should never make. People love Gammell. Give the people what they want, Hollywood!

The book series has over 80 different stories, and the film really only has just begun to scratch the surface of nightmares awaiting their screen time. The potential for something incredibly imaginative and true to the series should be very exciting for those wanting to know what’s next. Even so, I’m pretty sure we will all be fine with whoever they decide to introduce next as long as Guillermo del Toro is involved again.

While we all wait for a release date, feel free to speculate with us here at Horror Obsessive and tell us who you’re hoping to see in the upcoming film!