If you’ve read my articles before, you probably know that I love to go into a movie without knowing anything about it. Give me a high-level plot and set me loose. That’s what I did with Blood Vessel, and was not disappointed. But, it wasn’t until about an hour into the movie that I realized just how much fun this film was and how clever the writers turned out to be.

Honestly, the plot summary of the movie didn’t thrill me. The year was 1945, and there was a life raft adrift in the North Atlantic ocean. In it were the survivors of a torpedoed hospital ship. The survivors had no food, water, or shelter and are just about to give up when they noticed a seemingly abandoned German minesweeper drifting toward them. The group gets excited thinking that they’ve been saved, and they begin an adventure of climbing aboard the boat.

Now, there are a ton of Nazi flags on the ship, and the group is apprehensive at first about trying to board the vessel because of this—after all, they are a ragtag group of individuals who the Nazi troops would not appreciate finding on their ship. But it was do or die, so they took the chance. The thing is, when they board the ship, no one greets them and there seems to be no one on the ship at all. They set about exploring the boat to see what they might salvage for themselves in the way of food, medical supplies, and clothing. 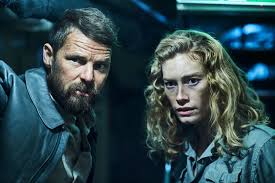 Here’s where things get interesting. While wandering the ship, they come across a few dead bodies who look like they’ve expired under suspicious circumstances. Some are leaned against walls with strange veins growing out of them—others have been burned to death. The survivors keep moving along while trying to figure out what must have happened here.

There is a painfully slow build to the action here. The writers give us lots of exposition to help us get to know and become invested in the characters. I’m not sure all the backstories work, but it doesn’t really matter in the grand scheme of the movie. The vibe is very B-movie with some attempts at humor and scenery that looks more like a soundstage than a true ghost ship sailing the North Atlantic. I’m drawn to these types of movies though and this one worked for me.

More strange things begin showing up as our survivors are wandering. Body parts and more dead bodies in goop begin to show up and it becomes further apparent that there are no Germans alive on board. Now, we begin with the jump scares (and they’re fun). A child (Ruby Isobel Hall, in her first film role) wearing a gas mask jumps from under a cabinet in the kitchen while the group is looking for food and scares the bejeezus out of everyone. When the lone female of the group, Jane Prescott (Alyssa Sutherland, best known for the Vikings and The Mist television series), attempts to reach out to the girl, the girl goes feral and bites her.

After the initial shock, Jane reaches out to her again, and the girl softens and allows herself to be held. The kid is scary-looking and obviously not well. She speaks Romanian and conveys that her name is Mya. She also keeps mentioning her “familia” and leads the group to the bottom of the ship where they find a bunch more dead people who they assume are her family. The thing is there’s a guy who has locked himself in a room on the ship and the group wants to coax him out to hopefully learn what happened. When the gentleman opens the door and takes one look at the little girl, he begins shooting and one of the group, Lydell Jackson (Christopher Kirby) is killed while returning fire. Obviously, the kid had something to do with the mess that took place on this vessel.

Upon further exploration of the ship, the group finds that the Captain seems to have killed himself and uncovers a strange book with what looks to be something like Medusa embossed on the cover. They open it and it looks like some supernatural writing inside. It doesn’t take a seasoned horror veteran to know that you close that book and get off that ship. But, along with the book another one of the group, Jimmy Bigelow (Mark Diaco) finds gold bars and decides that he’s going to be rich—another bad omen in any B-movie. Never take “rich stuff,” in the words of the Goonies, off of a possibly haunted ship; that ends well for no one. Oh, I forgot to mention the weird box of religious relics, crosses, and holy water they came across. I’m sure that doesn’t mean anything at all.

The men begin talking about “gremlins” aboard the ship and Nazi voodoo and one comments that something happened on the ship that “was far more real but no less strange.” Meanwhile, Jane noticed that she has strange lines spreading on her hand where the child bit her. Could this be some type of supernatural infection spreading? 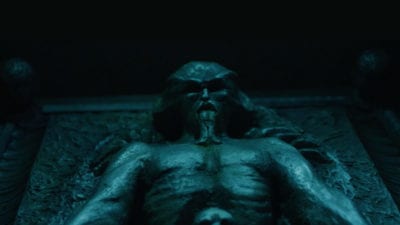 Now we’re at the part of the film where the group begins losing brain cells and I jump up off the couch with glee when I realize what is going on. Bigelow discovers an ornate coffin chained in the belly of the ship. Of course, he breaks the chains and opens it. Low and behold, we find the source of all the destruction—a vampire! This isn’t one of those sparkly vamps but a real-life Nosferatu-looking character. It is at this point that I realized exactly how clever the writers of this film were. Look again at the title: Blood Vessel. Not only is it an abandoned vessel on the sea with lots of dead people, blood, and decay inside but it is a wordplay on a vampire’s primary source of sustenance. Ok, maybe I’m easily amused, but I loved it.

In what I hope was a nod to Guillermo Del Toro’s Strain trilogy, Alexander Teplov (Alex Cooke), the Russian representative of the group, begins discussing strigoi and the vampire legends of Russia. As this discussion takes place, the big, bad vampire is busy freeing his family from their coffins and bringing them around with his blood. Now, the audience is clued in on exactly who the child’s “familia” was. 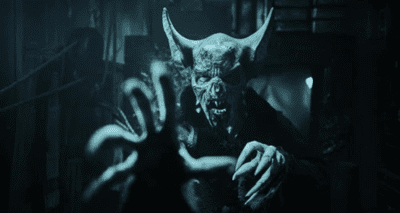 In what I hope is another nod to The Strain, we see that the male vampire is able to see through the eyes of his victims and is able to communicate in that person’s native tongue. Jane becomes aware of what she is turning into and is resolved to band what is left of the group together to “end this.” Doing so begins by burning the baby vamp alive which obviously enrages her “parents” and leads to greater loss of life. 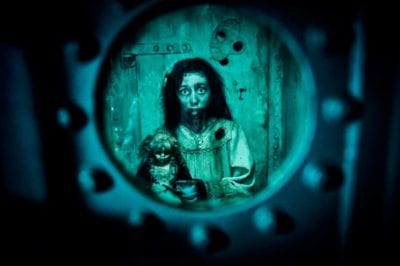 I won’t go any further into the finale of the film so you can take a look for yourself—and I hope you do. I had a ton of fun with this one. Like I said, initially it was a slow burn and I was waiting for the action to pick up but once it became clear that this was an interesting take on a ghost ship with vampires below, my attention level increased exponentially. If you’re interested in a B-movie with vampires that are truly nasty, you must check this one out.

My only question, and comment below if you know: are the vampires the result of Nazi experiments, or were they used in said experiments? The film doesn’t come out and say and leaves the viewer to speculate. Let me know what you think.