When beginning the Killer Valley Horror Film Festival short films block, you enter a graveyard. You hear the shoveling of dirt upon dirt. Someone is digging a grave. That someone is the grave keeper. A keeper of, as he puts it, terrifying tales of witches, demonic possessions, teenage slashers, and more. His hokey, committed performance is marvelous and sets the scene for what is a brilliant, blood-curdling journey of horror shorts. Some last only fifteen seconds, none last longer than fifteen minutes, and the vast majority deliver something amazing.

Short-form horror really works. Tiny doses of macabre tales offer sour-sharp experiences that can be amazing to digest. And when they are done well, a short can feel like you just sat through a feature. Well, that is certainly the case with a lot of the offerings from the Killer Valley Horror’s short films, which are separated into two blocks.

The production quality of all the works is note-worthy. These might be some of the best-looking short films I’ve had the pleasure of sitting through. The production value is only bested by the sheer variety of shorts. During your time with the combined four-hour viewing experience, you’ll come face to face with an ethereal smiling killer, virus outbreaks that feel too close to home, violent necklaces, monster books, and good old fashioned zombies!

All the shorts are cleverly punctuated with micro, vignette horrors that keep the pace flowing as you wonder what the next tale could be. It’s genuinely quite impressive that the makers of these shorts manage to capture a horrific moment in such a short time frame. Some of the content belongs to the fifteen-second film challenge, which has partnered with the festival. There’s a lot of these, but these are just a few that I found most effective:

An aging app on a phone actually ages the user past 100 years old.

A mother and daughter wonder where daddy is…until they wish they hadn’t.

Now onto the shorts themselves. During my time spent watching, I consumed 25 shorts across the two blocks. Let me just say, some of them had me biting my nails down to the skin. Some of them carved a smile on my face large enough for laughter to bellow out. And some of them even shone a torch on some of the very real horrors we are experiencing today. Overall, as previously mentioned, the quality of all the shorts was brilliant. So, I’m going to take you through some of the ones that left an imprint on me—snuck into my heart and made it shiver.

Disturbing and chilling, director Martin Vrede Nielsen presents an alcohol-soaked father dragging a wrapped up body through the woods. He’s wrestling with something dark as something darker seems to be stalking him. It’s soon realized that this father might have been responsible for the body not being alive anymore. And that body is his wife.

What I love about this short is that two horrors are working in tandem with one another. The first is that the mystery surrounding the events that could have led up to the murder are infinitely creepy, especially considering he leaves his daughter in the car to dispose of his wife’s body. Since we only see him in the final moments of a murderer covering his tracks, Abandoned engages in the macabre imagination from the audience. The second horror comes from the thing in the woods. We never truly see what it is, except for a hand slithering across a tree. The hand has some very impressive effects on it, and I couldn’t tell if it was a practical effect or CGI. 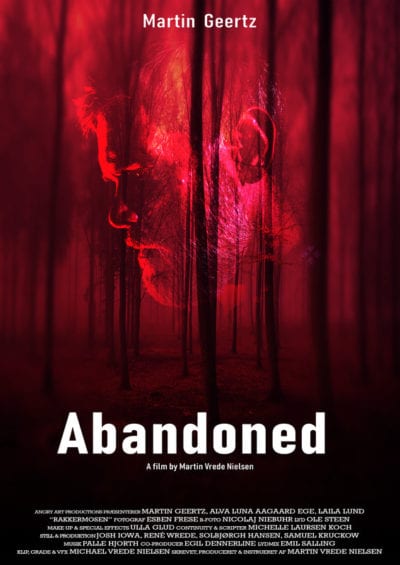 Eventually, the thing claims the very body the father is trying to get rid of, but not until the father expresses feelings of not being able to let go. The role is acted brilliantly, and you can’t fully understand the character’s anguish, which makes the scene that much more surreal.

By the time the husband lets go of the body, the ending reveals that he’s actually made a trade. A dead loved one for a horrifying replacement. It proves that in the pit of the character’s grief, the thing that’s left behind is enough resolve. It’s haunting, well-acted and sustains the mystery until the scary end.

No, this is not a horror based on the Alton Towers roller-coaster (although that does need to happen). Director Gregg Blake has created something that leaves much to be explained. In a good way. A simple premise: a couple goes house sitting and confronts the creepiest woman ever who wields a knife above her head. Oh, and she teleports. It’s wonderful.

The dialogue between the couple feels improvised; giving the characters a natural feel, which works well against the surreal nature of the titular killer. The killer just sticks out in my mind for being so odd. Her frozen smile aside, she can literally pop up anywhere—making her quite terrifying. This one is very short and sweet, but worth it for its oddness alone.

As creative as it is unexplainable, this weird short focuses on a style reminiscent of characters trapped in a modern silent movie…I think? There is a board game/TV thing that shows an enigmatic performer indicating what the horror victims should be doing to escape their ordeal. This escape plan involves chasing a motorized rat around whilst one of their friends chases them around like a demon.

I can’t understate the word ‘weird’ enough here. The whole thing feels wildly experimental, and although not everything seems to work, the intrigue is enough to disguise the mars. The way it’s shot is chaotic and brings out the panache of slapstick and over-the-topness synonymous with the silent film era. It’s a clever example of taking an aspect of a style (in this case, very much the acting of the silent film) and bringing that out in a brilliant display. I still don’t get it, but you don’t have to.

This is the gem from the first block—an enriched animated short carved full of character, gothic aesthetic, and haunting visuals. The animation style looks like an untapped section between stop-motion and CGI, giving each character a sort of vinyl wood look as if we are watching twisted wooden marionettes come to life.

It’s a simple story: some gothic baron mourns the death of his betrothed until a slinky, decrepit old man helps bring her back to life, at the cost of the baron’s hands. However, those hands have evil intent. The visuals are just straight-up gorgeous. It bleeds gothic.

And this is my take on just some of the grisly goodness from Shorts Block 2:

This one takes the scare crown for me out of all the shorts that I watched. Scary, sprinkled with dark, current politics, and wholly unique; the whole thing will sit with you long after you’ve finished. An angel-like character sits in a spotlight playing a dice game with something in the darkness. Every time she rolls, the thing in the dark steps back equal to the dice roll. Then it’s “his” turn. His dice roll indicates how many steps it takes towards her. And it rolls a lot of sixes. 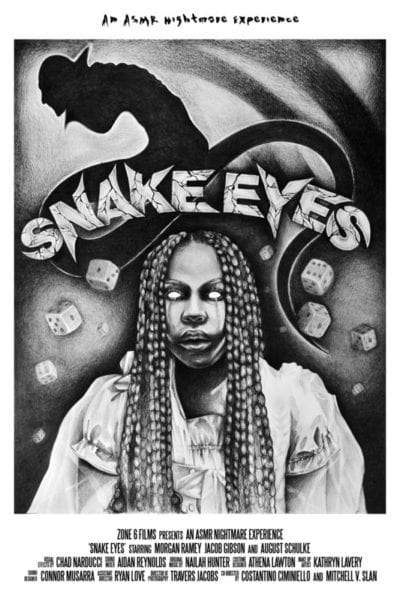 This one won an award for the best special effects within the festival and, my word, did it deserve to. The first time you see the thing emerge from the darkness, it takes the form of a young black man. His face contorts in horror and his mouth slowly gets wider and wider, but his screams are replaced with a cacophony of police sirens, shouts from law enforcement, and gunfire in a scene that perfectly encapsulates police brutality and freezes it in pure horror. It’s completely unexpected and your mouth will be as wide as the young man’s. It took me by surprise, and I still think about it now.

The short is also tremendously shot. The camera is pulled very far from the angel character creating a great vastness between her and the sickening darkness that surrounds her. This short was my favorite by far.

A great, self-contained short that hits all the right spots, Momma, Don’t Go is an example of a more complete short film experience. Two home invaders end up murdering a father and mother whilst in the middle of a burglary. The distraught daughter pleads with one of the invaders, the more compassionate of the two, to fetch the mother’s medication. He agrees with the hope of finding more money. The medicine comes with a note and once the mother takes it, she is resurrected as a ghoul—killing one of the burglars.

Sounds simple on paper, but it’s really well-crafted and paced. The scene where the dead mum kills one of the burglars is disturbing mainly because there is no accompanying music. We just watch this reanimated body rip the face of another human, with quite good practical effects. The fact that hardly any music is used really adds to the suffocating atmosphere between the daughter and the situation at hand. Very good indeed.

Although not perfect, I’m including this because of how cinematic the experience felt. Plus, it has one of my favorite lines in it. A man is self-isolating in the middle of a desert home when he’s invaded by what appear to be mutated bat people.

Self-isolation, Zoom video calls, bats. Yes, this is a COVID movie. The inclusion of mutated bats is a bit on the nose in light of the current real-world situation—the bat people being the personification of the virus. This is confirmed by the delivery of the aforementioned favorite line, “Go to hell, you fucking virus” before our protagonist (who won the best actor award in the festival) burns a bat person to death.

The build-up created before the bats arrive is done well. Obviously, the character is secluded, and this adds to the tension, however, it really takes its time before trouble shows up. I like the character’s reactions to the situation he finds himself in. The bat mutants could look a little less like Buffy the Vampire Slayer villains, but overall, it was a great experience.

They also had a feature film block, which we have covered over here, so be sure to check that out too. I hope everyone had a good Halloween, and thank you Killer Valley Horror Film Festival for an amazing experience.