Rumors of and hope for a Hocus Pocus sequel are nothing new. But last year, when Collider broke news that Hocus Pocus 2 would be coming to Disney+, with a script by Jen D’Angelo, the dream of so many fans seemed to finally be a reality.

Now, People Magazine reports that Bette Midler, who brought Winifred Sanderson to life in the 1993 film, confirms that each of the three witches, herself, Sarah Jessica Parker, and Kathy Najimy, have all been asked to reprise their roles. What’s more, all three have agreed.

What witchcraft Hocus Pocus 2 has in store has yet to be seen; however, little witches and warlocks everywhere can be assured that when the Sanderson sisters do make their return, they will be the same Sanderson sisters from 1993 and 1693.

In the meantime, Hocus Pocus fans who need more magic as the film gains more momentum can check out the actresses reuniting virtually in a video for Entertainment Weekly encouraging U.S. citizens to vote.

In addition, on Friday, October 30th, at 8 pm ET / 7 pm C, New York Restoration Project’s (NYRP) annual Hulaween benefit event is explicitly Hocus Pocus-themed. The one-night-only event, In Search of the Sanderson Sisters: A Hocus Pocus Hulaween Takeover, hosted by Elvira, Mistress of the Dark, will be a “documentary” about the Sanderson sisters, delving into their history. The event will feature the three witches, original cast members Doug Jones, Omri Katz, Vinessa Shaw, and Thora Birch, and even guests such as Jamie Lee Curtis, Meryl Streep, and Alex Brightman. Tickets are $10.

And of course, the film that started it all, Hocus Pocus, is streaming on Disney+. 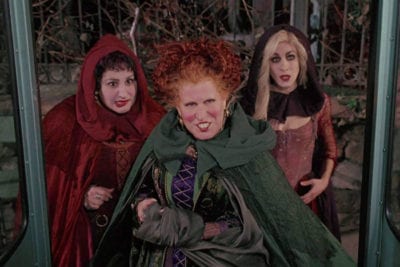 It’s going to be very interesting to see just how the Hocus Pocus sequel will be handled. The film certainly has a lot of hype—not to mention a hefty reputation—to live up to, multiplied by the long wait for Hocus Pocus to even receive recognition (which it now has thanks to annual TV airings, merchandise galore, and even a presence at the Disney Parks around Halloween), much less a full-on follow-up. However, with this much excitement and love behind it, including the three original actresses returning to reprise their roles, there’s a definite reason to believe that Hocus Pocus 2 will conjure up further Halloween fun, from the fans who actually saw it in theaters during its original theatrical run, to the kids whose parents turn it on each Halloween, to the people who stumbled on it by accident by seeing the characters at the Disney Parks, seeing a meme, or just stumbling on a TV airing.

It’s inevitable that not everyone will be satisfied by whatever the sequel turns out to be. But if the trajectory of the original Hocus Pocus from financial and critical flop to the beloved phenomenon (explained in more detail my article on the film) has taught us anything, it’s that first impressions don’t define a destiny, and that some magical potions just need a little extra time for the brew to hit just right.