Elvira, Mistress of the Dark, the character, has become so famous that, in my experience, even people who don’t know her name or aren’t familiar with her work can look at a picture of her and say, “Oh, her!” The horror hostess even appears “as herself” in Happy Halloween, Scooby-Doo! (2020), having previously appeared in a cameo in Scooby-Doo! Return to Zombie Island (2019). Elvira, Mistress of the Dark (1988), the movie, has a significant following itself amongst Elvira fans, and deservedly so. It’s a fun and clever horror-comedy featuring culture clashes galore on top of supernatural thrills and chills. (I’ve even written about it myself before.) Less well-known is Elvira’s second feature-length film, Elvira’s Haunted Hills (2001). 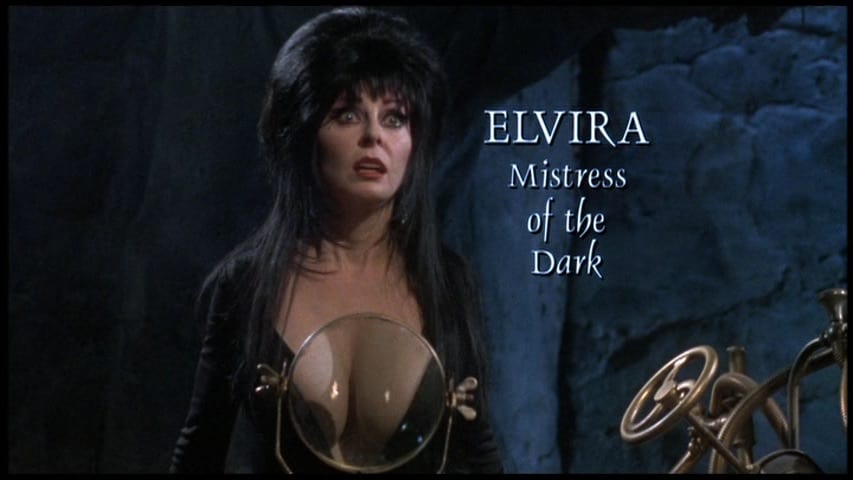 Everything in Elvira’s Haunted Hills screams “comedy”…sometimes by literally screaming.

One trait that sets this horror-comedy apart from many others is that it’s basically a live-action cartoon. The slapstick and visual gags stretch far beyond the physical limits of reality (sometimes literally) and the sound effects and music sound like they came straight out of a Looney Tunes short or Hanna-Barbera show.

Of course, Elvira herself brings her sarcastic and sometimes clueless sense of humor to the proceedings, poking at the ludicrousness of…well, everything in this movie. Her servant, Zou Zou (Mary Jo Smith) also brings humor by poking at some of Elvira’s own obliviousness and eccentricities. Clearly, whether she’s in a conservative Massachusetts suburb in the 80s or a haunted gothic Carpathian castle in 1851, Elvira is still Elvira.

From breaking the proverbial “fourth wall” and speaking directly to the audience to sprinklings of modern jokes to clash with the grim, 19th-century setting, to a completely out-of-nowhere musical number, and so much more, this is clearly a comedy film that slipped on a banana peel and fell into a melodramatic horror movie. And of course, there are the traditional puns and double entendres one expects from anything involving Elvira.

So, with comedy literally around every corner, around which corner is “horror”?

Elvira’s Haunted Hills’ plot, supporting characters, and visuals are heavily inspired by Roger Corman’s films, as well as Hammer Studios’ horror films from the 20th century. Enormous, old, austere castles, mysterious curses and illnesses following an extremely disturbed aristocratic family line, an outsider who visits said castle and family and finds many peculiarities that are waved off as nothing to be concerned about, but with grave warnings nonetheless. Not to mention a certain pit and a certain pendulum—and that’s just to name a few.

When it comes to the actors portraying the mysterious, cursed Hellsubus family, they all take the proceedings very seriously. So seriously, in fact, that their intense facial expressions and equally intense, dramatic delivery of the majority of their lines cross over into comedy.

So with the ludicrous seriousness, what stops this from being so-dramatic-it’s-comedic and makes it a genuine comedy?

Elvira’s Haunted Hills takes absolutely nothing seriously, and not in a bad way.

As mentioned before, almost everything is so exaggerated that it goes far past what any audience member would take seriously. The peculiarities of the Hellsubus family (which, in itself, is a name so obviously ominous that, in this context, it’s funny) are so numerous and so varied and the supposed “curse” that follows the family’s bloodline so convoluted that it’s laughable. Even events like character deaths are punctuated by sound effects and jokes.

Richard O’Brien as Lord Vladimere Hellsubus dives so deeply into dramatics and swings back and forth like a pendulum (like the one in the pit) from one personality to the next so rapidly that he’s unpredictable. Mary Scheer as Lady Ema Hellsubus has an intense gaze and an amazing grimace glued to her face for much of the film, and her constant disgust is a delight. Scott Atkinson as Dr. Bradley Bradley (not a typo) has an accent so posh that…well, it turns out it’s not even real. Heather Hopper as Lady Roxana Hellsubus plays up her mysterious coughing affliction so intensely that you may be laughing while being grateful she’s not hacking a lung (literally) onto you.

And mixed up in the middle of this literal madness are Elvira and Zou Zou, deliberately poking holes in the movie and the fourth wall. It’s Elvira and Zou Zou’s more self-aware sensibilities and commentary that show that yes, Elvira’s Haunted Hills realizes that that plot twist, that dubbed line delivery, that monologue that ran out of metaphors, was ridiculous, and intentionally so. So it’s okay not only to laugh at it but also to laugh at the other characters’ responses to it. This is the element that Elvira’s Haunted Hills uses to cement its status as a genuine comedy with its tongue firmly planted in its cheek.

This movie puts on no pretenses about being anything other than a movie, even mocking its own dubbing and special effects. It is the very definition of “silly.” Even the trailer gets in on the fun.

If you can “dig up” Elvira’s Haunted Hills, it’s a fun pick to pop in. If you decide to make it an Elvira “double feature” with Elvira, Mistress of the Dark (with an optional dance break in between), you’re in for a fun night of two films that are completely different in so many ways but have the common thread of the same title character, Elvira, bringing her goth, valley girl wit wherever and whenever she goes.