Shudder’s Scare Me is the most fun, exciting, absolute romp of a horror movie of the year, full stop. It is impossible not to love this movie. A perfect blend of absurd comedy and social commentary, this film delivers on all promises. You’ll laugh, you’ll cry, you’ll root for an incel-ish white man to die! And yes, that was meant to rhyme. Plus, Aya Cash is hot. What more do you want? 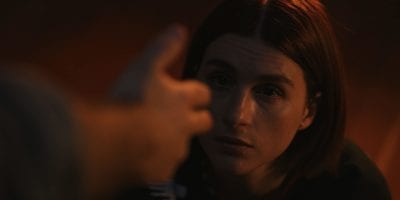 Let me get the technical stuff out of the way first before I dig deep into the meat and bones of this story because, whew boy, we have a lot to go through. First and foremost, this film is a masterclass on sound editing. Sound editing is hard enough when you have visual cues, but when each sound is imaginary, it’s got to be ten times harder. Scare Me is shot in a way that makes each subtle real-life moment of each story scarier and scarier as the film progresses. The cuts between the reality of the stories versus the enhanced imaginary bits of the stories are done with wit and precision.

Every single actor was perfectly cast for their role—and they acted like their lives depended on it. It was the perfect combination of comedic timing and creepiness. Aya Cash, Josh Ruben, Chris Redd, and Rebecca Drysdale are absolute geniuses. This film could not be more perfectly crafted. Aya Cash and Josh Ruben act out the stories they tell in such a perfect way that truly embodies the intents of their characters. Chris Redd adds perfect comic relief to what quickly becomes a tense situation. But most importantly, I really want to highlight Rebecca Drysdale, in particular. Her character, the Uber driver Bettina, was only in the film for a brief period of time, but she set up the tone for the film absolutely flawlessly with her exceptional delivery of the lines.

And the script, oh man, the script. It tells the story in what is both a fun and silly yet compelling way. Scare Me knows when to be over-the-top hilarious and when to be serious. It touches on very serious subjects that as a femme-coded writer I know all too well, but we’ll get to that later. Fred (played by director Josh Ruben) is so convincingly crafted as the ultimate white male douchebag writer who becomes increasingly terrifying, and Fanny (Aya Cash) plays off of him as a successful yet unassuming and unpretentious female writer. The juxtaposition of the two is nothing short of brilliant. These characters are expertly crafted. As the story gets scarier and scarier (because the aspects of the story get realer and realer), the comedy gets more and more absurd until it culminates in a moment where you’re truly unsure whether to laugh or be terrified. 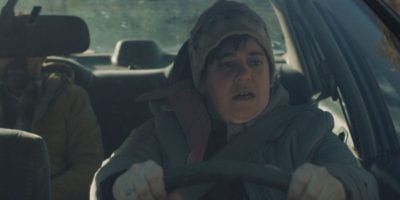 As fun as Scare Me was, it hit a little too close to home at times. The whole gist of it is that this fragile white male writer, Fred, encounters a very successful (also white, but Aya Cash is hot so it’s okay) female writer, Fanny, while at a stay in some cabins in the mountains. Very Misery but without Annie Wilkes. It’s clear from the get-go that Fred is insanely jealous of Fanny. When the power goes out, Fanny goes to Fred’s cabin for help and company. Fred, being the opportunist he is, lets her in, hoping to leech some of her success off of her. And when Fanny suggests a game of “scare me” in which the players take turns trying to out-scare one another with stories, Fred jumps at the opportunity to show off to her—to prove he’s better than her. And then things get scary (and hilarious…and fun…and then back to scary because white men are terrifying).

It’s all too common for women or non-male presenting, non-white people to be taken less seriously in writing spaces, especially by mediocre white males who think they’re great but can’t produce a single thing. I know this from experience. When in a writing workshop in New York, I encountered such a man—we will call him Bill because I don’t actually know any Bills now that I think about it. Anyway, there were about 15 people in the class, and only three of us, myself included, had horror scripts. Naturally, this excited Bill. Someone to show off to! Boy, how wrong he was.

I presented my story first (we presented three per class), and he absolutely fawned over it and gave me some of the nicest compliments on my work. Then came his turn. Now, I’m not one to mince words—I tell you honestly how it is. His work was subpar and extremely sexist, and I did not hold back one bit in telling him that. The entire plot made no sense. Bill was butthurt, and the next time it was my turn to present, that became clear. There were fewer compliments, but he couldn’t quite find a solid critique of my work. Nothing too severe, yet.

We each had three opportunities to present our work, and Bill happened to be presenting on the last day of class. At this point, I and several other of the female writers, as well as a few of the males, have told Bill that he needs to change the motives and subplots of his film because they are exploitative, degrading, sexist, and stereotypical, in the nicest, most encouraging way we can. We could not have coddled him more. There were some technical issues with Bill’s presentation the week before because of a switch in presenters that week, and some confusion on the teacher’s part, so Bill was relegated to the last class.

On our ten-minute break, when everyone else turns off their mics and cameras to tend to their business, Bill forgot to turn his off. I happened to be sitting at my desk on social media during break, and what I heard was just astounding. He had called up a friend of his and spent the entire ten minutes calling the entire class assh*les. His turn to present was next, and when it was my turn to critique, I let him know that we all knew what he said about us. His entitlement from that interaction alone was enough to discourage the entire class from working with him again. He did not prove to us that he was better than us—all he proved was that he was a douche, like Fred. 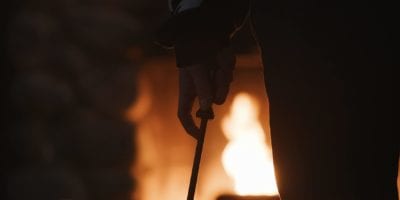 Entitled white males are pervasive in any industry, and I’m sure they all steal ideas, overinflate their importance, and act superior to all others everywhere they go. No, I’m not saying all white males, before you crucify me. But you know which ones I’m talking about. Scare Me is just as socially relevant as it is an absolute blast. Everything about this film is joyous, even when Fred is being a douche (seriously, it’s a ton of fun to hate him and wish him death…I mean wish him the best). I’m not saying there’s not a musical number, but I’m not saying there is either. You’ll just have to watch and see. Scare Me is now streaming on Shudder.