So here we go again, after a long slaughter laden slog through the post-apocalyptic world that has taken root in place of the one we once knew the end lays just over this hellscape’s horizon. The last time I left you I was on my way to The Black Throne, killing my way ever closer to not only clearing War’s name but also obtaining his long-awaited revenge. This area of the game will be no different, except for the fact that unlike any other section of Darksiders you will have to backtrack an infuriating amount of times. This makes the end feel a little drawn out, even though there is more than enough action and combat in the latter part of Darksiders this part of the game can feel a little repetitive.

The objective for this portion of Darksiders is as simple as it is frustrating, the goal is to transport a sufficient energy source to activate Azrael’s chains and to free him from his bonds. This will be accomplished over three stages, each stage will end with you coming face to face with the Guardians of The Black Throne. The fighting here is fierce throughout and it makes for a good challenge, but the creators of Darksiders provide you with all the tools you need to feel right at home in the middle of any combat scenario the game throws at you. This is part of Darksiders where you will use every single weapon at your disposal as the stakes ramp up as you edge ever closer to the conclusion of the game.

As I mentioned to free Azrael you will need a power source, and that’s where the Guardians come in, to free the power source from its own prison within the Guardians themselves first you must defeat the aforementioned brutes. The first of which is actually incredibly easy to dispatch of but they gradually get more difficult as you progress through the dark and dreary tower. Although the Guardians get tougher they are a very attainable goal with the power of the Voidwalker; a device that allows War to teleport through portals that lay strewn about the tower’s interior. This ability enables you to gain access to the weak spot on the top of the Guardians head, doing this three times will kill the Guardians and free the power source.

The Guardians make for short work once you figure out which portals are best for toppling the cumbersome mechanical monsters. This is not the most frustrating aspect of The Black Throne, this comes with the transporting/teleporting of the energy source from their positions to each of the massive floating blocks that Azrael is chained to at the center of the tower. This portion of Darksiders is so time-consuming and makes for frustrating times as you figure out the correct method to bring the power source to its final destination. Just like the Guardians, each time it becomes more difficult to get the power from point A to point B which can be tedious but luckily enough there is plenty fighting in between to keep you busy, which is so important because it distracts from the other areas where there are lulls in the action.

When you free Azrael all roads lead to Straga, the gruesome gargantuan that you will have to conquer to progress to the final chapter of Darksider’s armageddon fueled adventure. I mentioned in the previous article that the big singular enemies can be a lot easier to kill than the hordes that the game throws at you, and this is very much the case when it comes to Straga. Once more the importance of the Voidwalker becomes readily apparent, as you will need to use it to teleport to the platform that is conveniently placed right in front of the one weak spot that Straga has.  Although he looks immense, Straga is not very challenging. For a creature so massive he deserved to be a little more difficult to kill, especially seeing that he is one of the final bosses in the game. Because of this lack of difficulty, the battle with Straga feels a little anti-climatic compared to other boss fights in Darksiders.

After you have defeated Straga you are transported to the idyllic Garden of Eden, this is where you will obtain the Shadow Mask. The mask will aid you in your search of the seven shards of the Armageddon Blade, the weapon that you will need to defeat The Destroyer. Immediately after Azrael has gifted you the ability to peer into the shadow realm you are confronted by a stranger that looks a little more than familiar. This enemy you face is Shadow War—the shadow realms version of the horseman—and before you can make the first steps towards the end of your journey you will have to do battle against yourself. As you would expect, Shadow War shares all of the same abilities as War and this aspect makes for an intriguing contest, but after nearly 30 hours of controlling War, you should have become more adept at unleashing his arsenal than some Johnny come lately.

So after you show this cheap imitation what it means to be War you will now begin your search for the Armageddon Blade, the shards of which have been scattered throughout the terror-filled terrain. During your search for the weapon to end all wars, you will have one last opportunity to collect any loot that you may have missed throughout your journey because after you obtain the last shard of the blade there will be no backsies, there will only be the Final Battle against the real villain of the piece, The Destroyer. You will fight your way to each of the shards but before you can do this you must defeat Uriel in battle, this is where you will join Uriel in making a death oath, which can not be broken until War or Uriel should perish.

The battle with Uriel is a tricky one at first as her attacks come quickly and deal out a lot of damage, but after a while, the formula to defeating her becomes clear for all to see. Although when you do defeat Uriel you decide to spare her life. This is when you finally find out The Destroyer’s true identity, that being Abaddon, who you discover was courted by the prospect of immense power even though it would have the deadliest of consequences. Upon hearing this information Uriel flees and vows to lead the Hellsgaurd in an attack against The Destroyer whilst you leave to assemble the pieces of the Armageddon Blade, to do this you will have to revisit some of your favorite post-apocalyptic hangouts around the ruins of the world that once was.

It doesn’t take too long to assemble the blade, as the pace of Darksiders keeps moving along nicely right up until the Final Battle, even though there is more backtracking this portion of the game goes by quickly which allows you to get back into the action. After you finally get your hands on the last of the shards you are able to reforge the blade and ride your horse Ruin into combat against The Destroyer. When you finally arrive at the final battleground, you see that Uriel’s attack went as well as one could have expected as she and the Hellguard are resoundingly defeated by The Destroyer. Now it is up to you alone to bring the destiny of this realm back from the brink from which there will be no return.

The Final Battle is split into two parts, firstly you will have to defeat The Destroyer, and then you will have to have to put the sword to Abaddon after he reverts back to his angelic form. The way to defeat The Destroyer is by timing your attacks well as he charges towards you, playing a game of chicken for all the marbles. The first section isn’t too difficult, with the Armeggedeon Blade and riding on top of Ruin you will have more than enough to defeat the monstrosity that lays before you. When you strike down The Destroyer you will now be left with the true final battle, where you will have to finish Abaddon once and for all. This battle is very similar to the one against Uriel, Abaddon’s attacks are swift and deadly but he is far from impossible to beat.

As the fight progresses, Abaddon will take to the sky and rain down rubble on you but if you dodge these attacks then the rest of the battle is pretty straight forward. This battle may seem a little chaotic at times, but if you use the Armeggedeon Blade you will be able to conquer Abaddon, bringing you to the end of your long and deadly journey. Now you have your revenge and have gained some level of justice for War bringing a close to the epic tale that is contained within Darksiders. Now that the end is finally upon us, next up is the second installment in the Darksiders series where you will ride again but this time in the guise of Death itself. 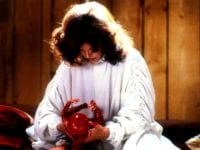