It’s a beautiful day at the beach: you’re treading water in the ocean, soaking up the sun, everything feels perfect. Suddenly, something brushes your foot. Something huge. The water around you darkens and you begin to panic, your mind starts to race—what is it? A shark? A whale? An Old God? James Cameron puttering around in his mini-sub? It doesn’t matter now, you swim away as fast as you can. It’s there, in that moment, that horror has thrived for centuries. This is because the fear of the unknown is the fundamental fear that everything that has ever spooked us stems from.

The Beach House takes our worst fears of the ocean and throws them out the window to give you a new reason to be afraid of the deepest corners of the Earth. The scariest phrase to me has always been “The ocean is so deep, we don’t even know what is REALLY down there.” “Yeah, great,” I reply, “I definitely want to go swimming now, thanks!” Sarcasm aside, I really mean it when I say I have no interest in ever learning the horrors that await us in the ocean. It’s for this reason that Shudder’s The Beach House just hit a little harder for me. It released about a month ago and in a sea of Host hype-pieces (deserved), it has yet to leave my mind. 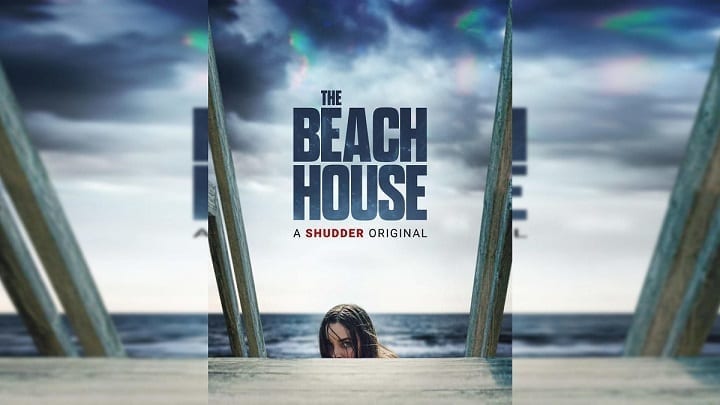 Fear of the unknown, or xenophobia by its original definition, has been such a strong part of who we are, it even changes how we live our daily lives. Additionally, it is the idea that what you don’t know can actually hurt you. From the beginning of the movie when we see the ominous dark fog rising from the ocean floor, we really don’t know what is going to happen next or what it is. We only know that things are about to Not Go Well. Writer and Director Jeffrey A. Brown keeps us on edge with a rapidly evolving scenario. It begins with two lovers simply wanting some private time in a beach house. The area is in the off-season and at first seems empty, but ends up being not as empty as they once thought. Pretty simple concept until you decide to put Lovecraft back in Massachusetts.

Anyone who has ever read a Lovecraft story knows that he loves creating concepts that are indescribable and beyond anything we could even fathom.

Because it’s scarier, that’s why! 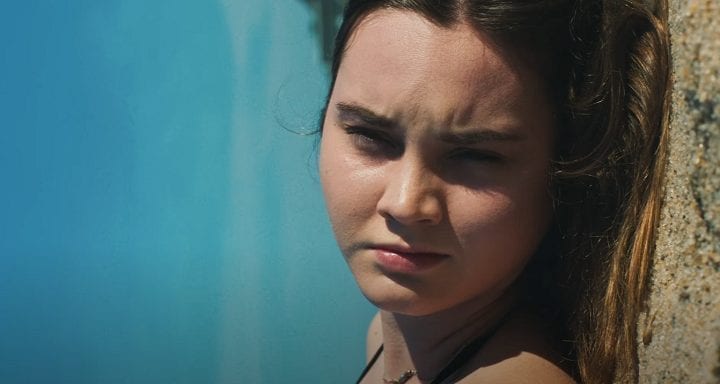 Your imagination is the producer of all fear, and it is a writer’s greatest tool. Eco-horror has long been the biggest (and in my opinion, the best) subgenre, from the monster animal flicks like Jaws and Godzilla to the more obvious Lovecraft love letters such as Annihilation, and more recently the brilliant adaptation of Color Out of Space. They all strive to achieve the same goal—to scare the pants off you by making you fear something you do not understand.

Throughout the first half of the film, Emily (Liana Liberato) shows a strong understanding of the world’s ecosystem. However, most of it flies over the head of everyone around her. Right off the bat, we know we have a nerd on our hands. Although, who better to have by your side during an environmental crisis? Except when even she struggles to comprehend what exactly is going on, this only reinforces the idea that what we are dealing with is beyond our comprehension and possibly even otherworldly.

It should go without saying that I will never vacation in Massachusetts. I hear Maine is great though! Nothing bad ever happened in Maine.

Now, if I were to ask you which of these you were more afraid of, a snake or a mushroom, you would presumably fear the snake more. This is called being “biologically prepared.” We are hardwired to fear snakes because we know they can poison us and kill us. However, the reality is that mushrooms pose a bigger threat to the survival of humans. There are over 100 types of poisonous mushrooms in the USA alone. Despite this, we don’t consider them biologically relevant to fear in any real way. 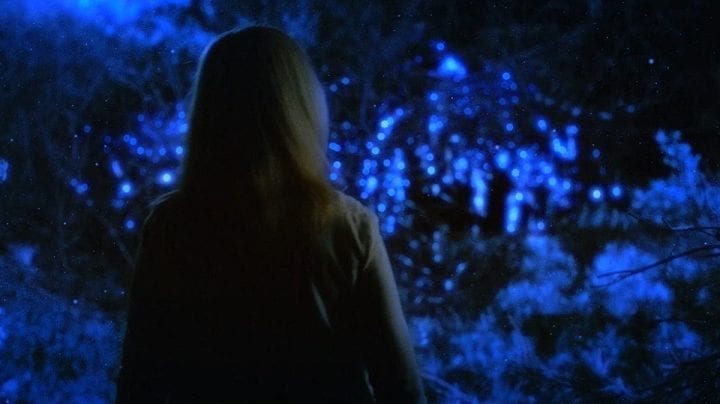 In The Beach House, we see Jane wandering through a now-glowing forest, in awe of everything around her beginning to change as the mysterious fog rolls in. We may know the danger, but she clearly does not and assumes it’s just the edibles kicking in. It happens to the best of us, I suppose. In fact, no one except Mitch (and we know how that ends) is afraid of anything changing around them. Until we see Emily plant her foot into a disgusting pile of mutated goo and flesh tentacles that washed up on shore along with 20 of its friends.

This point in the film is what you would call “crap hitting the fan.” The point of no return. It’s the realization that something horrible has woken up and is about to change the world as we know it. I’m not talking about taking the plastic off your grandmother’s favorite chair kinda change, although I’m sure grandmas worldwide would agree that ruining a chair is much worse. I’m talking about everything we know about the biological world changing in horrific ways.

Eco- and Cosmic Horror, perhaps best described by Vivian Ralickas as the “fear and awe we feel when confronted by phenomena beyond our comprehension, whose scope extends beyond the narrow field of human affairs and boasts of cosmic significance.” The definition is as broad as the genre itself. For decades, filmmakers and writers have conveyed their darkest fears to us, creating concepts that seem to have come out of time and space. The Beach House successfully asserts the idea that there are still horrors lurking in the oceanic abyss here on Earth.

Legendary Scream Queen, Barbara Crampton, recently tweeted “H.P. Lovecraft gave us a glimpse into unknowable and unnamable horror, thereby giving us a glimpse into ourselves.” While everyone has their own opinion on what is and isn’t scary, I’ve let this subgenre shape my imagination in such horribly delightful ways. For a few moments, you can watch the unknown become known. You can let a storyteller bring their vision to the surface, presenting new ideas to make your brain run wild. New creatures and horrible imagery to keep you up at night. Eco-terror like The Beach House has always been an expression of our inherent fear of the world around us. No matter the story, they all raise the question: the snake or the mushroom?

The answer is both.