I don’t often think of Magnolia Pictures as a distributor of horror films. I’ve known them more for their riveting documentaries and independent offerings. However, the release of Amulet from writer/director Romola Garai has given me a new appreciation of what they have to offer in the horror realm.

Amulet is Garai’s feature film debut, however, she is no newbie when it comes to acting, writing, and directing. Garai is a multi-award nominated actor with extensive film, TV, and stage credits including work with some of the world’s finest writers and directors. She also has an extensive list of TV credits and stage roles. Romola also is known for her writing and directing work including a Sundance Best Short Film nominee, Scrubber. She has a feature film in development with UK top production company, The Bureau, and a number of TV projects.

Garai explores the story of Tomaz (Alec Secareanu), an ex-soldier from an unnamed foreign conflict. While digging in the woods, he finds an amulet that he takes home as a souvenir of sorts. Sadly, when he is released from the war, he lives as a homeless veteran.

From the beginning, I was struck by the cinematography of the film. The shots of the forest in which Tomaz lives during his time in the war are not only breathtaking but they reveal the true isolation that he must have felt in the woods alone. Arial footage of the treetops reveals no other homes or campsites in the vicinity and the use of lighting shows the foggy, visibly moistness of the grounds.

The introduction of the amulet, however, is strange. Given that the movie is named after the object, it felt like it should have played a larger role. Tomaz digs up the amulet and it ends up just sitting on a shelf in his cabin. The camera pans to it a couple of times making you feel like something sinister may happen and then nothing does. This seemed like an odd use of the object to me.

The real story begins when while living in an abandoned building, a fire breaks out and Tomaz collapses while running away. He is discovered by a nun, Sister Claire (Imelda Staunton), and is taken to a local hospital with a head injury. After being patched up, he visits Sister Claire’s church to thank her and find that she has saved the few possessions he had with him. While Sister Claire makes Tomaz feel comfortable, you can feel there is something off about her that gives some insight into the idea that this Sister may not exactly have the best in mind for our hero.

Staunton is amazing throughout the entire film. She is a veteran actress and it shows. She pulls you in with her graceful nun act and makes you feel that she is one of the good guys in the film. In this scene when she gives Tomaz back his possessions, he asks her about a roll of money that he had with him. She tells him that she found no money and you believe her. Yet, in a subsequent scene, we see her throw the money down a sewer grate. Brilliant manipulation of both the character and the audience.

To further indebt Tomaz, Sister Claire offers to help him get back on his feet by taking him to the house of a parishioner named Magda (Carla Juri) who is in dire need of a handyman. Magda isn’t thrilled about Sister Claire bringing this person to live with her, but she does offer Tomaz lunch and allows him to stay, giving him room and board in exchange for repairing the home. While it seems like a nice gesture, the viewer gets the idea that there is something amiss here as well. There are plenty of hushed conversations between Magda and Sister Claire and it seems odd that the good Sister would bring a strange man to a parishioner’s home to stay without first consulting her. It becomes obvious that the sister has something on Magda but it seems to be explained away when you realize that Magda is caring for her terminally ill mother and is over her head.

Again, the acting in this scene is impeccable as is the use of the house. Staunton and Juri play off each other expertly as the older, respectable nun and young, impressionable woman. Juri is subservient to the nun as most Catholics would be but, in the same breath, she also lets it be known that she is taking this bachelor in under duress. She may be young but she’s scrappy and she can take care of herself. Juri plays the two sides of this character in one scene so well that you feel as if you know her.

The house offers credence to this idea of Magda. In some places, it is obviously falling apart just as she is in trying to care for her mother. Then you see some of the beauty and character, such as the stained glass windows in the doorway, and it seems as if Magda has at least some things under control. 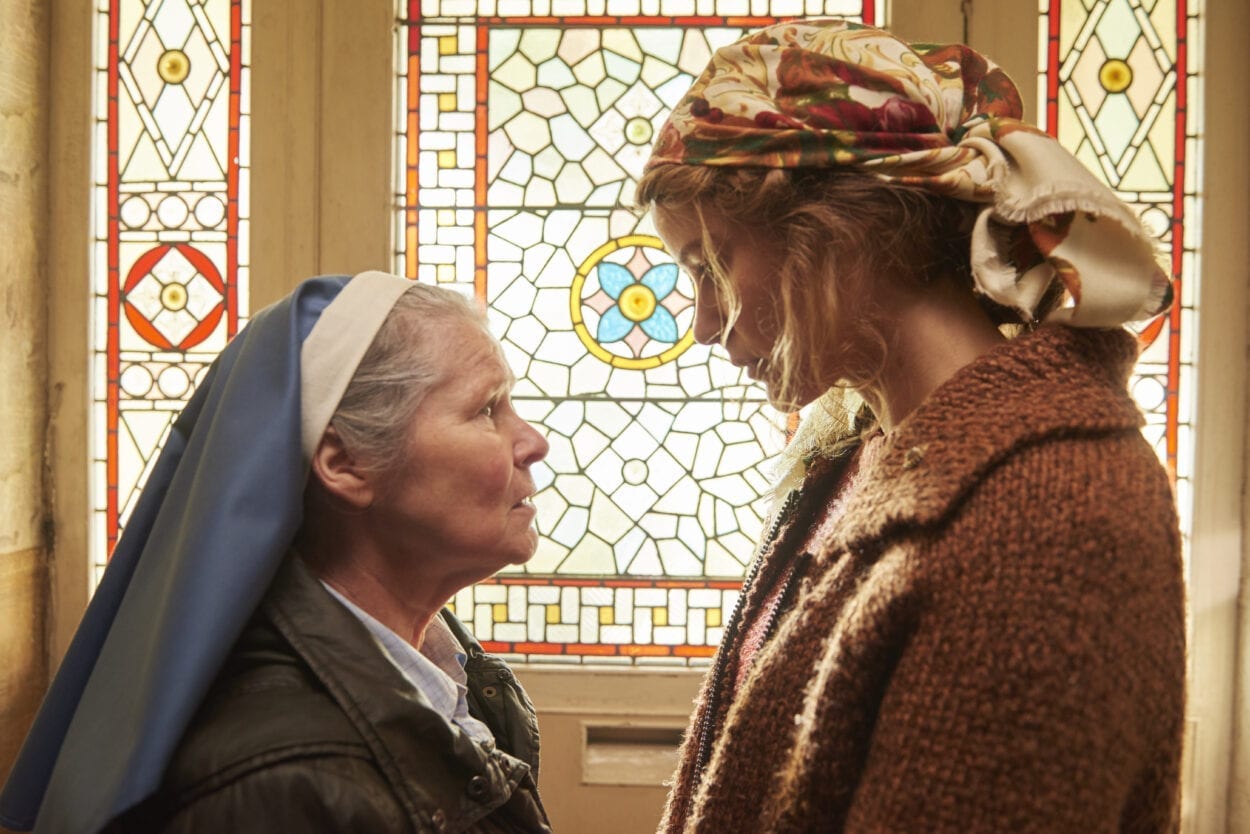 As Tomaz begins opening himself up to Magda and they become almost inexplicably closer given her near hatred of him in the beginning, he accidentally discovers where the mother stays and what she looks like. She is obviously beyond illness—there is something supernaturally wrong with her. He screams and runs from the house like any normal person would do. But, in a weird turn of events, he returns and takes Magda on a date seemingly out of nowhere. His past again haunts him and he leaves her on the dance floor after kissing her.

This scene seems odd to me. Tomaz is shocked to see the mother in her current state but it doesn’t shock him enough to keep him away from the house. If I were to find a woman in an attic who is obviously possessed or in some way riddled with supernatural illness, I would run and not look back. Instead, he returns to the home and asks Magda on a date leaving her mother in the attic writhing in pain. Does he really feel the need to be the hero that badly that he believes one night out on the town with him will make everything better for her? It’s obvious that she’s doing fine on her own thus far and doesn’t necessarily need a man to protect her. In fact, he seems to be causing more of a headache for her by being around. Or is this all part of an elaborate plan? 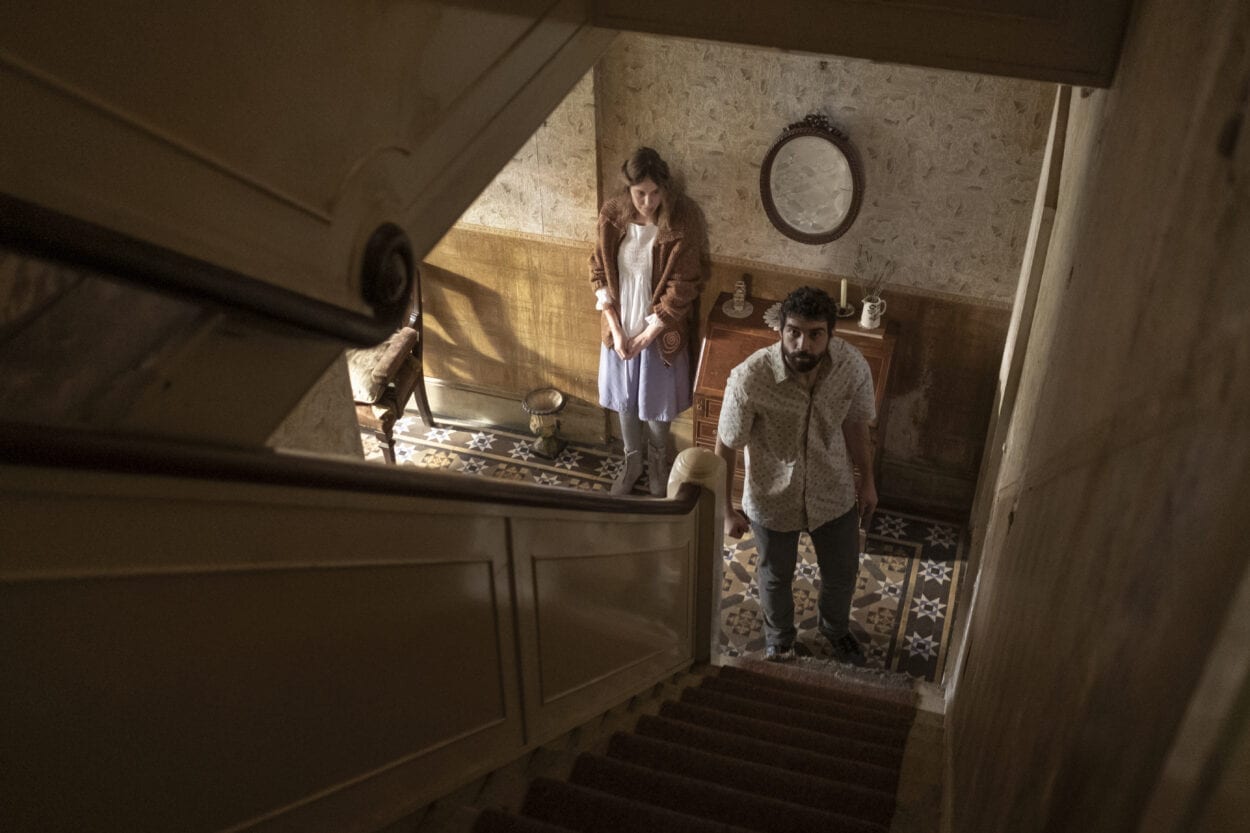 After another harrowing run-in with Magda’s mother, Tomaz runs to Sister Claire who confirms that there is something supernaturally amiss. “Why am I here,” he asked. “It is your destiny,” Sister Claire tells him. “You will protect her, won’t you?” With one sentence, Clever Sister Claire appeals to Tomaz’s need to once again play the hero and sucks him back into the craziness of the house right where she wants him.

The women in this film play the men perfectly. Sweet and innocent when necessary to lure them in; cold and calculating when they finally have them. It is this exquisite acting by the cast that keeps you watching until the end even though all of the pieces of this tale don’t always come together so easily—let me be honest, there are a few scenes that I had to outright ask myself why they were included and what the hell was going on.

Garai puts a solid effort in for this film. As I said, the acting by all the main characters is superb. The story is solid enough that it keeps you guessing about what is really going on behind the scenes until it unfolds in a strange twist at the end. There are a few areas of the film that didn’t make a ton of sense to me (the appearance of an albino bat is one of them) but they don’t take you out of the suspension of reality for too long. If you’re in the mood for an old fashioned, witchy story, give Amulet a shot.

Amulet is currently available for streaming on YouTube, Google Play, and Amazon Prime.