The first Deadly Premonition was very much a case of a bunch of happy accidents coming together to create something that was far more than the sum of its parts. It was the proverbial lightning in a bottle. In other words, it was an experience that would be extremely difficult to replicate, and, having beaten Deadly Premonition 2, I can say that my feelings on it overall are mixed.

I stated in my day 1 review that I was already sucked in by the mystery of who ritualistically murdered Lise Clarkson and why. To my shock, I played on for about an hour after my stopping point for that review and discovered who did it. The mystery has technically been solved by the end of the first chapter, and the rest of the story plays out as a cult themed drama. It leads to some extremely bizarre pacing decisions. By the end of chapter 2, most of the major players in the story have been killed off, and chapter 3 acts as a weird sort of epilogue involving a previously established character and their motivations. Lastly, chapter 4 takes place in the present day, with Aaliyah Davis investigating Francis Zach Morgan and the final piece of the Clarkson murder falling into place, as well as some nice closure to the long-suffering Zach.

It is such a strange decision on SWERY’s part. Say what you will about the first game, but the story was paced very well, strange though it was. Each clue led to more shocking twists and turns, and the central mystery had a satisfying conclusion and tied very nicely into the overarching tale of York and Zach and what they go through. Here, the overarching story is still very strong—as I stated above, the emotional payoff with Zach is enormous, and very well done— but the central conflict isn’t quite as satisfying. Not only that, but the first two chapters follow a very standard pattern of “complete some quests, go through an Otherworld dungeon, fight a boss and move on to the next chapter.” Chapter 3, where York confronts the final person behind the Clarkson conflict, plays out entirely in a cut scene. It felt like there was supposed to be some kind of confrontation that was subsequently cut for whatever reason. It made me scratch my head more than once, even though I did enjoy what was going on.

What I enjoyed far less was the quest design. There is a now-notorious fetch quest in chapter 2 where you must get some information from the town’s priest, and he demands three particular items before he’ll talk. You run all over town to get these items, and characters make very knowing comments on the tedious errand you’re being made to perform. At one point, York even says, “Can you believe it Zach? This is nothing more than a fetch quest!” To make matters even worse, one of the items you need can only be bought on Monday, and the chances are high that you’ll be on Wednesday, maybe Thursday at the latest. You’re forced to sleep 1 day at a time, only you must make sure York eats something each day because of the game’s otherwise-pointless hunger meter. Then, after you get those items, the priest makes you get another three items. The whole thing is clearly meant to be some kind of commentary on game design and player motivation, and the fact that the towns folk know exactly what request you were given when asking for the items is kind of hilarious, but none of that changes the fact that the quest sucks. Big time. It’s flat out bad and borderline inexcusable.

Other quests, such as in chapter 3, involve following different characters all across the game’s map, and while these are far less annoying than the fetch quest, they’re still pretty tedious. And unlike regular travel around town, where you can listen to extremely entertaining conversations between York and Zach, or between York and his young assistant Patricia, there’s no dialogue during these missions. Again, it feels like SWERY is trying to make some kind of comment on mission design and player motivation, and it again falls flat.

This is on top of the largely pointless side quests. The first game had a pretty good variety of side activities on offer, and while the low difficulty meant the bonus weapons and items you got from them didn’t necessarily feel integral to your progression, they still offered a nice break from the action and gave you a chance to interact with the game’s extensive, endearing cast. It helped make the surprisingly large map feel purposeful. I wouldn’t go so far as to say that it made the game world feel alive, but it at least got you more invested in the goings on around town. In this second entry, side quests are not only surprisingly tough to come by, but they offer very little in the way of worthwhile rewards or fun interactions. Sure, the characters in Le Carre are still pretty damn charming, but they don’t make the town pop like in the first game.

The larger issue is that most of the rewards are tied to the game’s crafting system, which is used to add modifications and upgrades to York himself, as well as the one gun he gets. If you should choose to do so, there are a whole host of options available for you to fine tune your loadout, from damage upgrades, to stamina boosts, to charms that help your performance in mini games. The problem is that combat is so stupidly easy that upgrading only makes things even easier. Ammo is absolutely dirt cheap, meaning you’ll never run out, and enemies don’t get tougher as the game goes on. Sure, a few varieties are added, but they retain the same amount of health throughout the game’s run time. And bosses are arguably even easier. Each boss has the same amount of health, and their attacks are painfully easy to read. It’s almost insulting how easy the combat is. It’s a known fact that the first game was never meant to have combat, and now I’m wondering if the low difficulty is meant to be a giant middle finger to the producers who forced SWERY to add it in at all. Either way, upgrading anything feels largely pointless since the main game is already so easy.

As a brief side note, the enemies in this game are bizarre, to say the least. The base monsters you run into are demented looking clowns with scissors (most likely a nod to Clock Tower) who mumble things at you like “SNIP SNIP!” The few other remaining monster types you run into oddly retain the clown/circus motif, and it’s never really explained why. In the first game, the enemies were pretty basic Japanese style spirits/zombies, but there was a surprisingly good narrative reason given for their existence. Here, the monsters are just plain old weird without any explanation.

From a purely objective standpoint, Deadly Premonition 2 is a bad game. It’s arguably even worse than its predecessor in many ways, not the least of which is the notorious performance issues. The real magic of the game is that I was still engrossed in it despite all the bizarre pacing, severe lack of difficulty, and flat out bad mission design. The core cast of York, Patricia, and Aaliyah Davis are all so well realized that I was willing to put up with the game’s numerous flaws. Interactions range from touching to downright hilarious (a scene where York mentions how The Naked Gun was a startlingly realistic depiction of life as a cop and that the script writers must have consulted real officers when writing it had me in tears, speaking as someone that adores those movies). The moment to moment interactions are so downright charming that I would go so far as to say they make up for the larger problems the game has.

In other words, what I said in my day 1 review remains true after having beaten the game. The fact that this sequel exists at all feels like a small miracle, and if you’re someone that enjoyed the first game, chances are you’ll be on board for all the stuff the sequel has in store for you. For those that were put off by the…unique choices made in the first game, all this one will do is affirm your dislike for the series. I’m happy we got this game at all, and even though it doesn’t quite recapture the magical lightning of the first game, and is positively loaded with bad design choices, it’s still worth a look for those attuned to the weird frequency the series is known for. 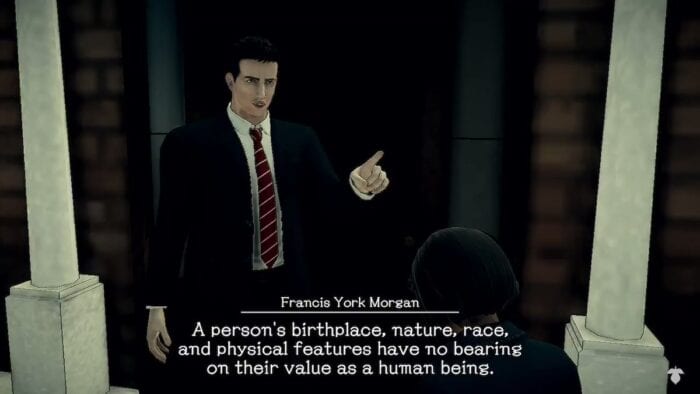 Lastly, as a brief final note, I mentioned at the end of my day 1 review that there was some controversy surrounding the treatment of a transgendered character in the game’s script. While I was too late to see the original offending scenes, the issue has been addressed, and without giving too much away, the educated guess that I made based off how the scenes were changed (lines that I assume were previously voiced have now been relegated to text only dialogue, even in the middle of a VA’d scene) I really don’t think any harm was intended in the first place. The issue has been addressed, though, and it was addressed…I won’t say well since they clearly cut corners like in many other facets of the game, but it’s been handled and changed to give this character the proper treatment.