The name George Romero is synonymous with the zombie film. There will never be a time—not today and not twenty years from now, where the director’s name doesn’t come up when discussing the topic of the living dead. From 1968 and on, the New York native created his own sub-segment of cinema, focusing his allegories on the panic of society, especially when dead people start coming back to life. He didn’t attempt to turn the wheels of tension on an audience the way Alfred Hitchcock did or wasn’t interested in shocking with hillbilly chainsaw murderers the way Tobe Hooper did, but he truly wanted to understand the subject of the zombie. Night of the Living Dead starts in a cemetery and chases characters back home into a corner, fearing for any chance of survival. From thereafter, Romero would expand where the zombie could go, and also attempts to find a way for the living and the dead to coexist. Romero directed a total of seven films that specifically focused on the zombie but among all of them, Day of the Dead is the one that tries to find a coexistence between the human and the zombie. It’s also the film that, more than ever, portrays the perfect interpretation of how the living can be equally worse than the flesh eaters. In Day of the Dead, the living are all dead and the dead are just trying to keep on living.

Hiding Under Ground: Science vs. the “Freedom” Fighter 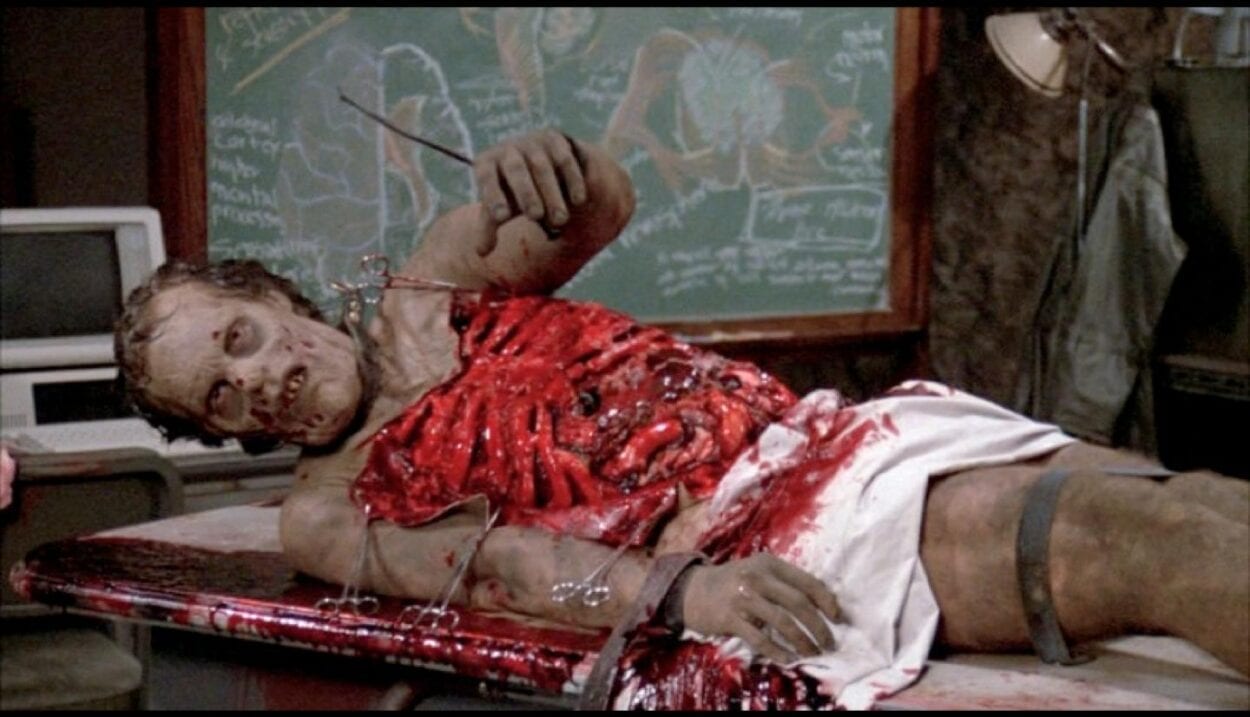 During this time of Covid-19, it has completely changed how we view any movie involving a virus, but Day of the Dead is impressively still relevant today. Things begin with a group of four people riding above in a helicopter, searching for survivors, hoping for any sign of humanity. Of course, one already knows that this isn’t the place where you make new friends. The group of four consists of ex-military, intelligent people all on the edge of sanity, and the steel reserved Sarah (Lori Cardille), establishing herself as the straight thinker of the group. As each character reveals what their purpose is, Romero does not have any intention of making it a story about one individual, but two factions of thinking. There are the intellectuals that want to fight the virus with science and figure out exactly why this is happening to humanity. The other side is the hot-headed, gun-toting fighters, ready to dispose of every zombie out there. It is the perfect recipe for disaster—unmeasured, erratic, and the last thing you want to be doing when mass crowds of zombies surround your facility.

What Romero does differently than he did in previous films is he gives the audience hope; a sense that there is a light at the end of the tunnel. Sadly, that is typically a ruse and the dam is ready to break open. The scientist that is in charge of figuring out exactly why everything is happening is no Anthony Fauci. It is Dr. Logan (Richard Liberty) spearheading the study of undead brain activity and his work may seem valiant, but also equally crazy to that of a Dr. Frankenstein style experimentation. The debate from Logan’s side is treating the zombie humanely, rewarding them for learning how to use a set of headphones, and keeping them chained at the neck till they can understand exactly what makes them hunger for flesh. Rhodes (Joseph Pilato) is the leader on the military side and has no sense of care for the dead. If he had it his way he would just dispose of them all. What Romero does differently this time is not make the fierce final girl, the pissed off macho man, or the scientist doing all sorts of weird experiments the star. The star of Day of the Dead is a zombie named Bub (Sherman Howard): standing tall, pale decaying skin, and an underbite one can’t forget. In the second act, we discover that Bub can operate a razor on his face. In the third act, we find out he can operate a gun. The zombie is learning, evolving, and their day of reckoning is quickly approaching. When death surrounds you, it comes for everyone—no matter if you shoot it with a drug or a bullet.

Survival is Not an Option, No Matter What Side You Are On 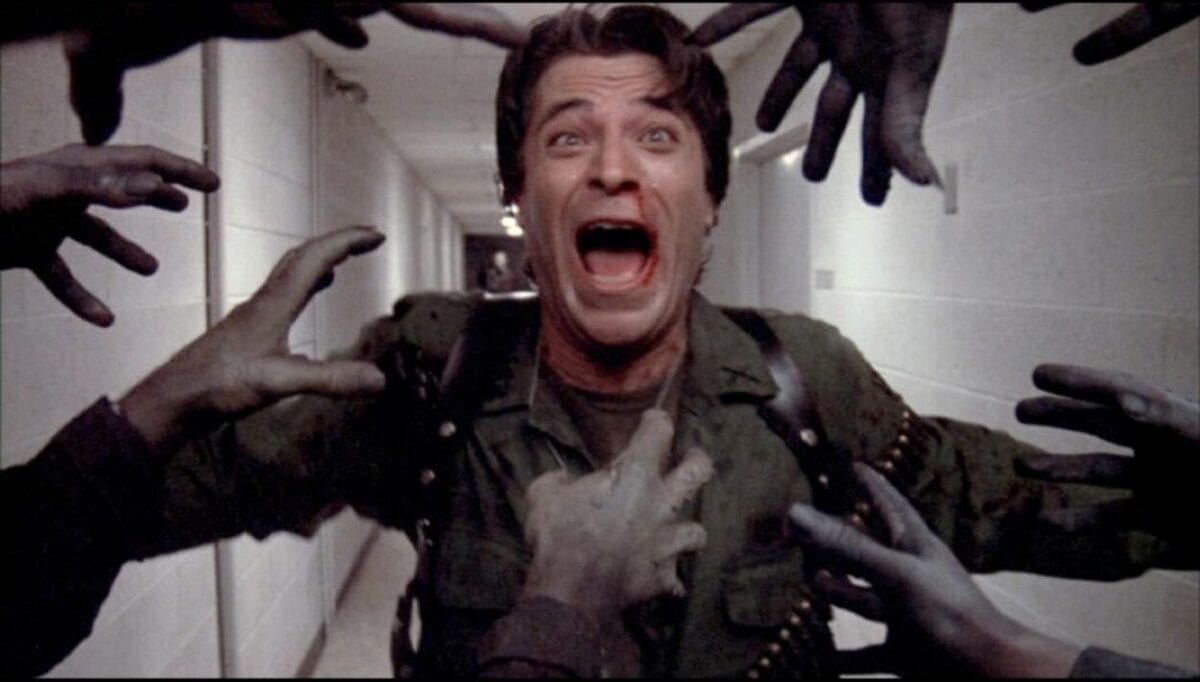 When you lay down Romero’s three prominent zombie pictures: Night of the Living Dead (1968), Dawn of the Dead (1978), and Day of the Dead (1985), the third installment is arguably his bleakest. The narrative begins and ends with Sarah counting down the days on a calendar. The opening shot is a moment of brief optimism, where the closing shot is a moment of dread. At least that is my interpretation of it all. Night of the Living Dead is about surviving for just another day and Dawn of the Dead is about taking control of your own fate. The mall location is an endless source of weapons and ammo, making it seem like the humans are hunting zombies for sport. For Day of the Dead, the theme is apocalyptic. The location is an underground salt mine turned military bunker that looks more like an early grave for our characters. Finding a sense of “normalcy” is evidently what our characters continue to seek. Especially when we see John (Terry Alexander) and McDermott (Jarlath Conroy) invite Sarah to their beat-up mobile home with a painted sign that says “The Ritz”, reminding them that at one point life was sweet. Now it is just delaying the inevitable, and as wreckless humans attempt to find answers, the zombies gain more control. The third act especially opens the floodgates of zombies biting flesh, ripping heads off, and Bub becoming the one with control.

A common theme of Romero’s pictures is the perceived intelligence of humans. It is in those themes that audiences (including yours truly) view characters with an outside superiority. I think it is safe to say that with our own pandemic taking place in our backyards, we see that humans will undoubtedly act in their own selfish interests. Humans can’t be bothered with wearing a mask on their faces for the 10 minutes they spend in the Walgreens, let alone defeat large packs of zombies. In Day of the Dead there is little intelligence in those who believe it can all be solved with a gun, and there is little sanity left in those trying to solve things with logic. One of the smartest statements in the entire film is John proclaiming that the best alternative is to “get in that old whirlybird, find us an island some place, get juiced up and spend what time we got left soakin’ up some sunshine!” The logical motivation is to run and find the farthest place away from it all. And although that is the easiest and smartest decision, it is also delaying the inevitable. I don’t think Romero was ever interested in his characters surviving forever. Even when Day of the Dead finishes with a flicker of happiness, it is a moment that could well be a dream in Sarah’s head.

George Romero Can’t Be Stopped. He Has the Heart of a Zombie 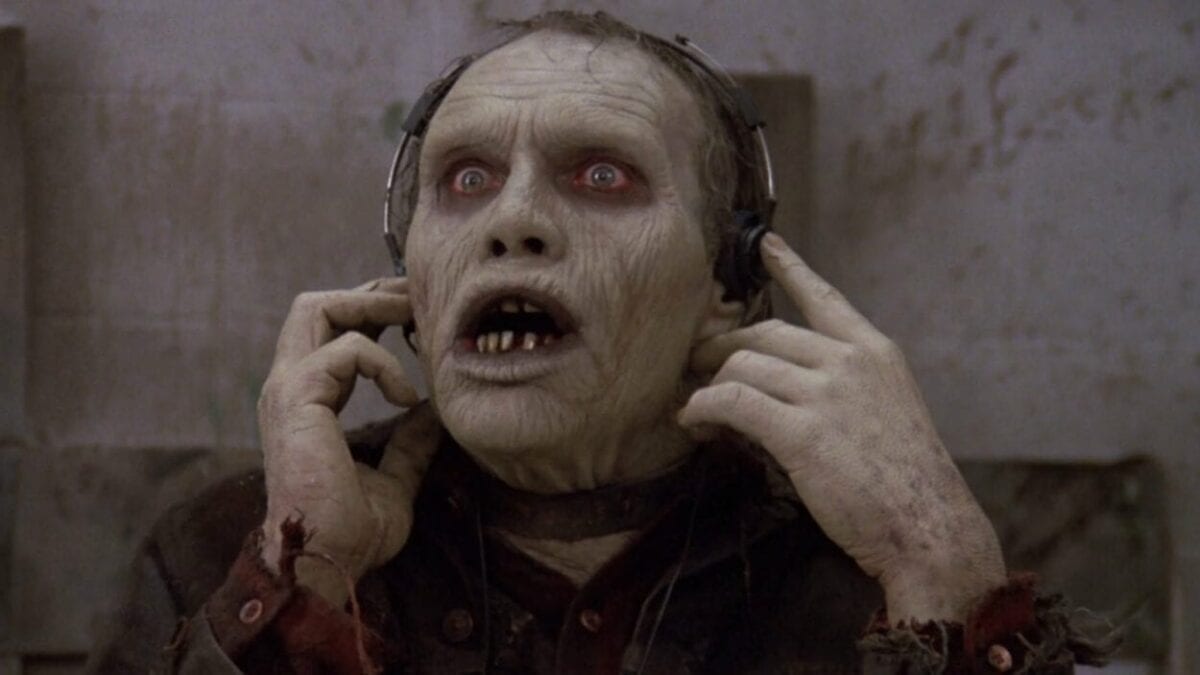 Doing research on Day of the Dead is equally as exciting as the movie is. It’s no mystery that it is the lesser of Romero’s Dead trilogy, but it is equally his most mature. It was Romero’s lowest-grossing picture yet, but there is patience to the screenplay revealing that the director was never in a hurry to give us the bloodshed we typically expect in zombie pictures. Roger Ebert flat out hated the film. The legendary Chicago Sun-Times critic went on to say, “According to the mad scientist in “Day of the Dead”, the zombies keep moving because of primitive impulses buried deep within their spinal columns – impulses that create the appearance of life long after consciousness and intelligence have departed. I hope the same fate doesn’t befall Romero’s zombie movies. He should quit while he’s ahead.” Little would Ebert have expected, but Romero went on to make three more zombie pictures, continuing to poke and dissect exactly what it was we loved about this sub-genre.

Even if it is the basic response, the answer for Day of the Dead’s cult success lies in the spectacular third act. Tom Savini’s expert work in the make-up department is nothing short of epic and the peak of Day of the Dead is when Rhodes meets his fate as his body is torn in half. There is also incredible nostalgia for how Romero portrayed his zombies. The dead were a complete mixture of style and gore. Some had ripped limbs or flapping skin, while most have weird skin pigmentation, making it completely unique to the zombie work we see today in shows like The Walking Dead or movies such as the WWII survival flick Overlord. If there was a major at a college to earn your doctorate in zombology, George Romero would have been the first recipient. Day of the Dead may not have been the major success that George Romero had initially hoped for, but it cemented him into the bloodstream of horror cinema. It’s been three years since the legendary director passed away and Day of the Dead keeps getting better with each viewing. And yes, Sarah, John, and McDermott might be enjoying their time on the beach in the end, but that doesn’t mean the zombies have gone away. They’re walking among us and now they’re walking off into the sunset.