“Lake of Death: A Slow Burn Worthy of Supernatural Cult Status” is now available on Audio, written and read by Audrie Roelf, exclusively for our Patreon supporters. For just $3 a month you will have access to our full library of Audio content, plus three new uploads every week. To sign up visit the 25YL Media Patreon page.

Admittedly, I don’t know much about Norwegian horror films, so when the opportunity to screen Lake of Death (a remake of a 1958 movie of the same name) came up, I jumped at the chance. Besides, Lake of Death is one of those movies that I absolutely adore—friends go on an adventure to a cabin in the woods and get far more than they expected. So, I sat down expecting a gore fest and I was the one who got more than expected.

First, the scenery in this movie is nothing short of breathtaking. The fogginess of the forest sets up the supernatural uneasiness that continues throughout the film. The movie opens with a shot of Lillian (Iben Akerlie) and her twin brother, Bjorn (Patrick Walshe McBride), in a canoe on the lake. The lake is clear and the woods around them are absolutely gorgeous; it’s definitely a day that anyone would be happy to spend out there. It is clear that Lillian and her brother have a very special bond (honestly, the relationship borders on odd), but Lillian is telling him that she’s leaving with her boyfriend, Kai (Ulric von der Esch), and he is anything but happy about it.

Flash forward a year to Lillian and her friends returning to the lake after Bjorn has disappeared without a trace. Everyone believes he is dead; however, Lillian holds out faith that he may still be alive somewhere. Kai picks up the group from the train station and it is immediately obvious that there are unresolved feelings between him and Lillian which causes a bit of tension with her new boyfriend, Gabriel (Jonathan Harboe).

Upon arriving at the cabin, the 20-somethings are obviously delighted to be on the property and even more excited to make new memories to lessen the tragedy of losing Bjorn. However, not all is perfect. The first indication we see that there may be an issue with the cabin is that Lillian’s dog wants nothing to do with going inside. Trust the instincts of animals, my friends.

Soon, the group heads down to the water for relaxation. As they sit around enjoying the day, they begin discussing the lake’s history and the possibility that it is haunted. According to Kai, legend has it that a former resident was bewitched by the lake and killed his wife after finding out she was having an affair with a neighbor. As the conversation continues, we find there are many other stories surrounding the lake—none of them good.

The uneasiness begins the very first night in the house. Lillian begins having nightmares about her brother and is discovered sleepwalking. The next morning, the group congregates at the kitchen table where a beautiful breakfast has been set out for them. The main issue is that no one in the group admits to setting the table or making breakfast. When Harald (Elias Munk) reports for breakfast with the word “dau” (Norwegian for dead) on his forehead, the foreshadowing begins.

Shaking off the strange events of the morning, the group heads back to the lake. Harald and his girlfriend, former swimmer, Sonja (Sophia Lie), are enjoying each other when all of a sudden Harald is pulled underwater. He is saved by Sonja but the power of the lake has been established. It is during this time that Lillian begins seeing visions of a web of darkness on Harald’s chest.

The movie is a slow burn supernatural thriller reminiscent of those After Dark Horrorfest films of the mid-2000s. The film grabs you with an ethereal setting and plenty of eeriness and doesn’t let go for a full 90-plus minutes.

There are some moments that true horror fans will definitely enjoy. At one point, the group discovers a secret cellar in the cabin which they discuss as being very “Evil Dead.” In another scene, Bernhard, the podcaster documenting the group’s adventure, comments on the cabin feeling very “Cabin Fever”…another nice call back to a horror classic.

It is in this cellar that the strangeness begins to ramp up for Lillian. She begins her visions again where the lake is taking over her, her friends, and the cabin with a spidery black substance. Soon, Lillian is speaking with Sonja who is comforting her after her vision, and she lets us all in on her childhood with Bjorn. She and Bjorn were placed in a state orphanage as children. Lillian was given to foster parents, while Bjorn was left at the orphanage. When Lillian returned to the orphanage for her brother, she discovered that during their time apart, when she began sleepwalking, Bjorn went mute.

The group’s second night at the cabin gets a little stranger. Lillian is sleepwalking again, this time in the woods. She is having visions of black water coming from her mouth, eyes, and ears as she begins running from an unknown entity and falls into the lake. She is discovered by her friends and is unharmed, but they decide that someone needs to stay awake all night and watch her as she has become a danger to herself. The plan fails and Lillian wakes up the next morning on the dock with two lily pads covering her hands. Now things are getting real. 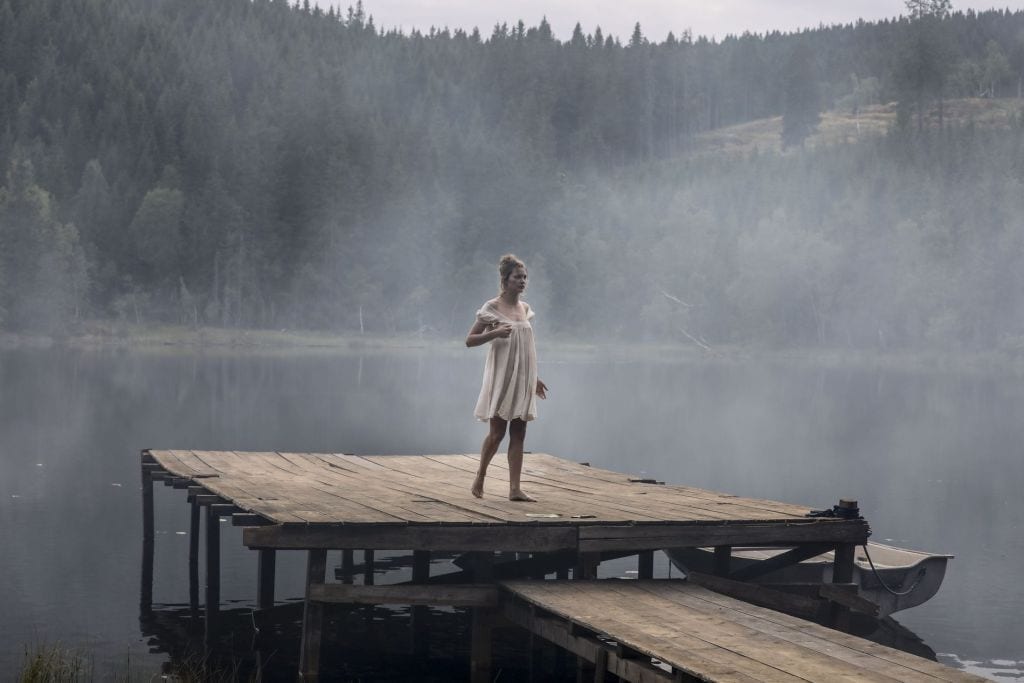 After a short walk back to the cabin, Lillian discovers her dog hogtied in the shed. He is unhurt but the group is scared enough that they decide it is time to leave the property. The only problem is that the radio with which they need to contact Kai has been smashed with an axe, and they are trapped. They begin pointing fingers at each other.

On the last night in the cabin, the group salts the doorways to combat evil spirits, and, for some strange reason, they decide to head back into the cellar to look through some of the old boxes being stored down there. Bernhard comes across Bjorn’s diary and pockets it without telling anyone. Upon reading it later to the group, he notices that the handwriting and language in the diary completely change by the end and it is as if Bjorn is out of control of his faculties.

Events rapidly decline from there as Harald disappears and is found dead the next morning by Sonja and Lillian as Gabriel and Bernhard discover Kai’s car with the dashboard covered in blood, and the group’s cell phones destroyed. At this point, Bernhard looks at Gabriel as a possible threat and runs to warn the girls.

The ending of the film was a shock to me and I love that—it was one I didn’t see coming and that doesn’t happen enough in horror films these days. We learn a bit more about Bjorn and Lillian’s relationship, get some additional breathtaking shots of the landscape and underwater action, and are left with a question as to if the lake really has the power the myths suggest or if the terror was man-made.

Shudder never fails to curate some great horror content and Lake of Death is another solid example. Lake of Death begins streaming exclusively on Shudder on July 16.