It has been said that twins have a strong psychic connection to one another. Maybe one twin is involved in an accident and the other one knows immediately by some sort of telepathy. Or one twin has an impending sense of doom and subsequently finds out the other has passed away. In the latter case, the remaining twin may feel a kind of survivor’s guilt or responsibility for the lost twin. Such is the complicated relationship between the brothers in the 1982 horror film, Basket Case.

Writer/director, Frank Henenlotter’s cult classic is firmly planted inside the sub-genre of body horror, arguably made famous by powerhouse directors like David Cronenberg and David Lynch. The movie surrounds Duane Bradley (Kevin Hentenryck) who arrives in New York with a locked basket under his arm, a wad of cash in his pocket, and little else. He is looking for vengeance for an unwanted surgery that separated him from his conjoined twin brother, Belial. We are introduced to Belial when Duane rents a room in a seedy motel and unveils the contents of the basket.

During the course of the film, we learn that Belial was separated from Duane during an illegally performed surgery done when the boys were teens by a couple of unscrupulous veterinarians in search of fame and fortune. Belial was little more than a head, torso, and arms removed from his brother’s side. Only one twin was expected to survive, but due to horror movie magic, both lived to seek revenge.

The downfall of the brotherly bond begins when Duane meets and falls in love with a nurse, Sharon (Terri Susan Smith). His brother becomes enraged with jealousy and attacks Sharon. When Duane becomes aware of his brother’s betrayal, he moves to take action in honor of his lady love. 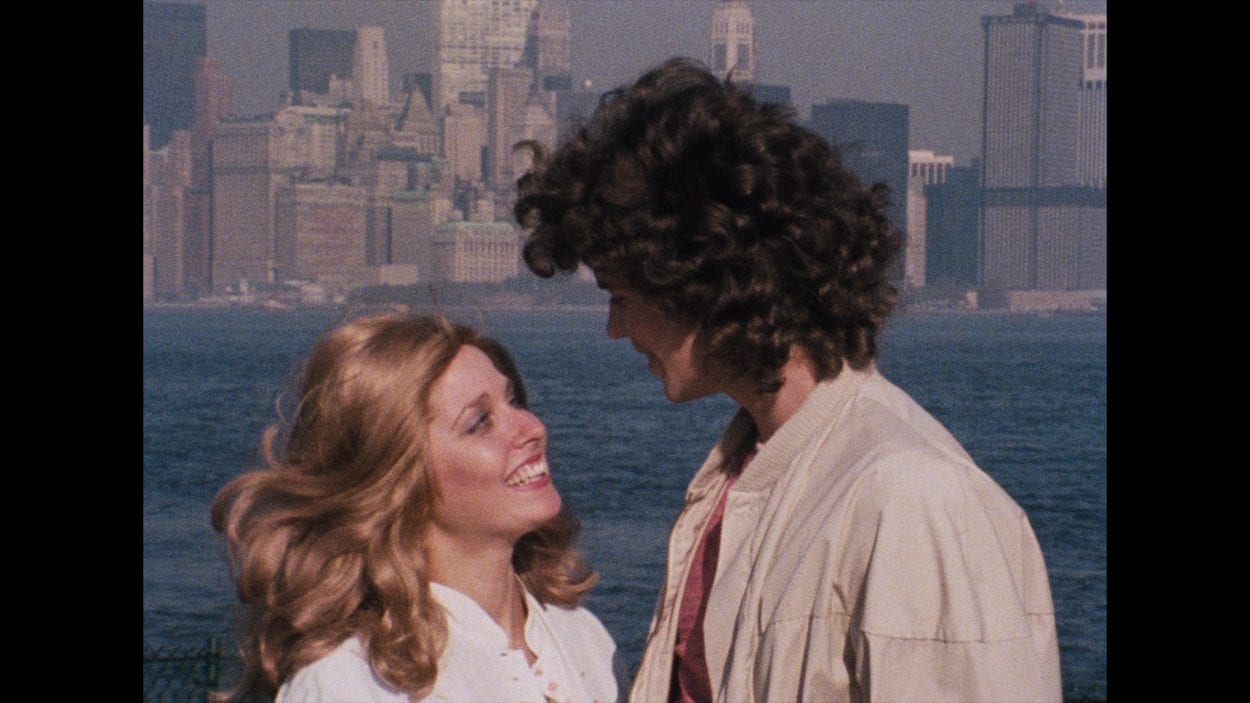 While body horror mostly serves to showcase graphic or psychologically disturbing violations of the human body including mutations, zombification, disease, and the like, the genre has roots in gothic literature and often is seen as social commentary. Such is the case in Henenlotter’s cult film.

When we meet Duane, he disembarks from his bus into the heart of Times Square. He is an immature youth immediately fascinated by the sights and sounds of the big city. Straightaway he is pursued by a drug dealer and then further hassled by the clientele at the unsavory motel in which he chooses to reside. He’s an outcast in a sea of outcasts and they mean to teach him that lesson—he’s an easy mark. 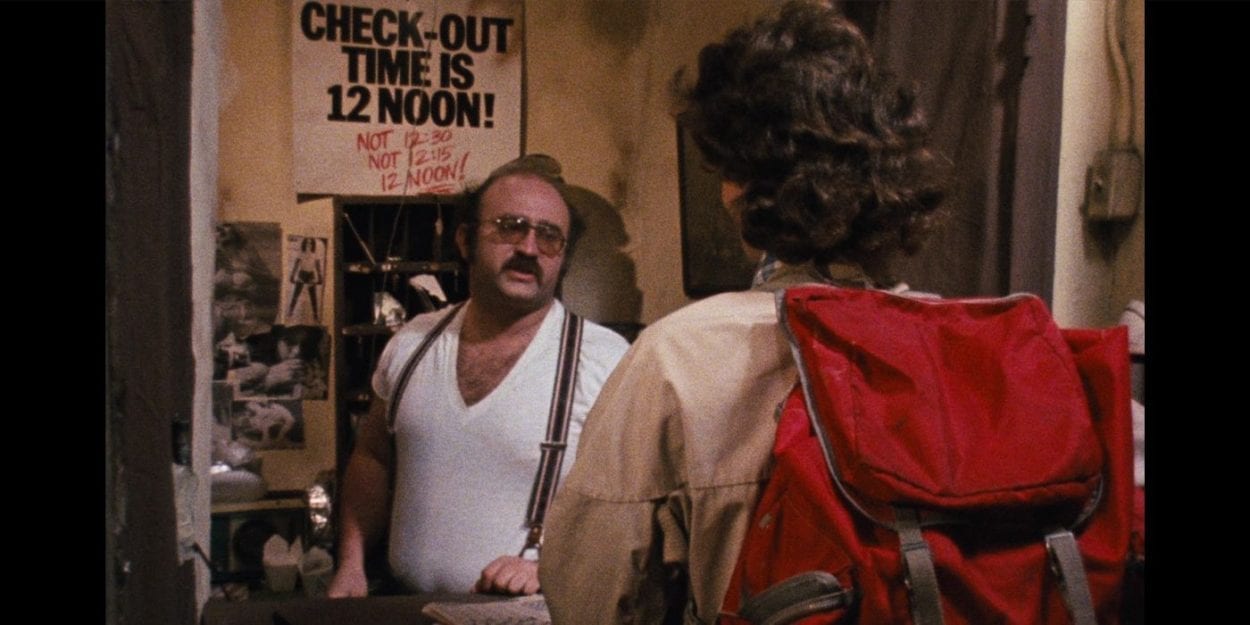 We’ve seen this theme in many movies through the years: naive kid runs away to the big city to chase a dream (in this case a murderous one) and is taken advantage of before finding love and becoming wiser. Think such contemporary films as Rock of Ages or Showgirls. Yes, New York is a place where people run in search of making something better of themselves, and screenwriters are quick to point out the pitfalls of trusting the wrong people. Beware of the big bad, young bird.

That commentary on the survival of the fittest slaps the viewer in the face. But this film goes a little deeper. The relationship between the conjoined twins is interesting. Belail never should have survived separation but he did, and now Duane feels a sense of obligation to his disenfranchised sibling. He agrees to tote him to the city so that Belail can murder those responsible for their separation because he’s the strong twin, the viable twin. He’s the one with a chance at regular life, and that’s one hell of a guilt trip. 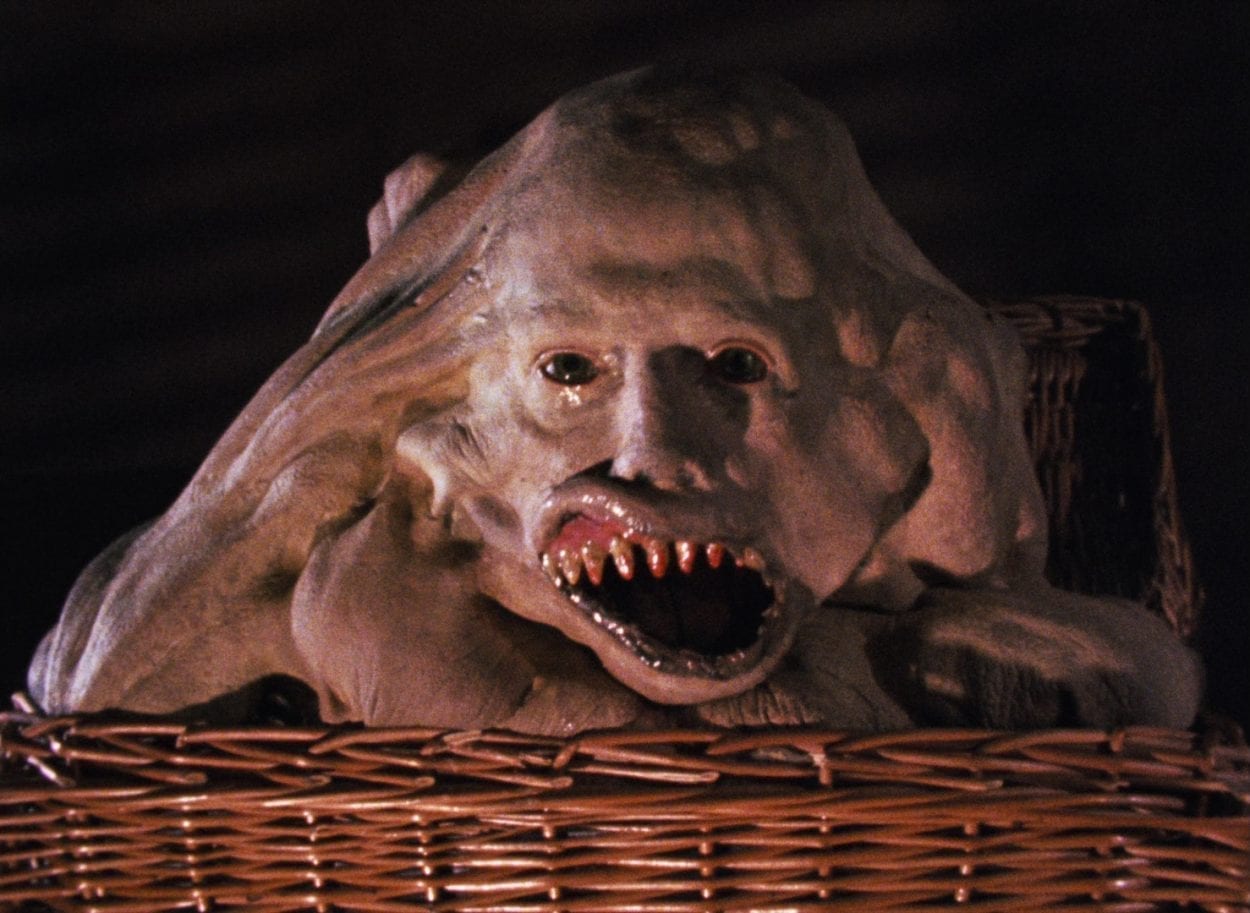 Such guilt is often present in a family member who finds success and is dragged down by those who did not. Or, maybe a sister feels responsible for her chronically ill brother because she is the one with good health. We often hear stories or find films dealing with the idea of the one who makes good and is saddled with dragging family behind. Basket Case illustrates this guilt literally by introducing us to Duane, a guy carrying his completely dependent brother around in a basket.

As is often the case in body horror, we’re given commentary on sexual inadequacy and frustration in Belail’s failed assault of Sharon. Belail understands that his very survival is called into question when Duane falls in love with the young nurse. This enrages Belail who must then assert his dominance over his rival.

Belail enters Sharon’s bedroom while she sleeps and begins fondling her. Obviously, he is unable to perform which leads to frustration and eventually rage. In this rage, he kills Sharon and is discovered on top of her dead body by his distraught brother.

This leads to the climax of the film and the downfall of the brothers’ relationship. Upon Duane’s discovery of his murdered girlfriend, he realizes that he can no longer be responsible for his brother and his urges. His brother has become a liability to his life as an independent man.

In this scene, Henenlotter seems to comment on the idea that we are all ultimately responsible for ourselves and cannot carry the burdens of others. Doing so leads to frustration and eventual alienation.

At face value, Basket Case is a gross-out comedy horror film that was a virtual box office failure and owes its popularity to the advent of home video in the ’80s. However, upon closer inspection, we see a study of family ties, societal hierarchy, and the demise of relationships when faced with imbalance.

Basket Case is currently available to stream on Shudder.