If you were to ask Spiritual Advisor, Robert Munger, if the Devil were lurking around during the filming of the 1976 classic The Omen, his answer would be a resounding “Yes!” and many others would agree. From the beginning, the film faced many challenges, some of which may be considered a curse in their own right. The Omen survived multiple name changes, re-writes, and studios before the more sinister events ever became an issue. What started as The Anti-Christ turned into The Birthmark, while eventually taking its final form as The Omen. That was only the beginning; the writing also had many changes to come.

The Devil Behind the Curtain

One of the things Twentieth Century Fox did was probably something that saved The Omen entirely. Alan Ladd asked the producer, Harvey Bernhard, to drop the “heavy-handed” stuff, such as covens, and instead to focus on subtlety (even Mrs. Baylock was a concern due to her obvious evil intentions). Every death needed a reasonable explanation that could be written off by coincidence, and it was up to the viewer to decide if all this death and destruction was the work of the Devil or merely a case of bad luck. The need for uncertainty could be seen as an omen for what was to come. The eerie script was mirrored near perfectly by the events that surrounded the cast and crew of The Omen once filming began.

There are many stories to be told, and some of them are graphic. It is worth keeping in mind that these are stories from producer Harvey Bernhard, director Richard Donner, writer David Seltzer, and spiritual advisor Robert Munger. Not all occurrences are verifiable beyond their recollections. The events explored here, for the most part, come from a special features interview held with those mentioned above. These stories can be found just about anywhere, however. Here we will stick with the stories and events that have come directly from the source, as curses are hard to cite. So grab your crucifixes and get ready to decide for yourself, The Devil, or bad luck?

The Devil in the Details

Filming of The Omen began in October 1975. From the first day, Robert Munger reports an eerie feeling that he describes as “evil.” The atmosphere itself has been described as “strange,” but with no real further explanation. Soon the cast and crew would experience events that anyone would be hard-pressed to ignore. Airplanes had much trouble during this time, and two separate flights were struck by lightning on the way to production. The first flight was carrying actor Gregory Peck, who portrayed the doting father and authoritative political figure, Robert Thorn. Three days later, (according to Richard Donner), on the same daily TWA flight, writer David Seltzer would also experience a lightning strike mid-flight.

The third airplane incident is regrettable and takes with it no whimsy. While filming on a very tight budget, the crew needed shots involving a private plane, and they had planned to use ground shots to save money. As luck would have it, the day they were set to film another party chartered the plane. At this point, production was able to get the plane for “next to nothing.” Given the tight budget, they jumped at the opportunity. The charter took off that day as usual. Still, things quickly went awry. As described by director Richard Donner in interviews included in the 1996 special edition box set of The Omen, “They took off, plane hit a flock of birds, the engines quit, they lost airspeed, crashed on to the end of the runway, went down into the street, hit a car, and killed everybody in the car. In the car were the wife and two children of the pilot.”

Mace Nuefiled, an executive producer, claims that due to IRA attacks in the area, they were nearly bombed at dinner—being missed by less than an hour. He goes on to say that the subway station was blown up in front of them as they were walking towards it. Another incident occurred when filming the wild animal scenes; after shooting in the lion compound, they moved on to the baboon section. Around the same time that the crew exited the lion compound, one of the guards failed to close the door to his booth and was consequently attacked by two lions. Unfortunately, the guard did not survive the attack, and the lion compound footage never made it into The Omen. 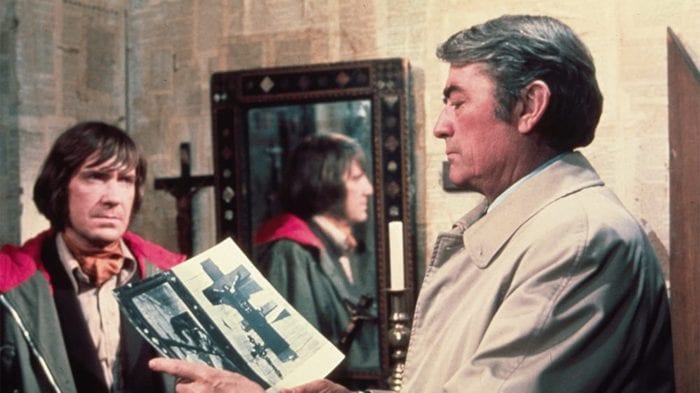 In one final blow to the production, fellow crew member John Richardson was to experience his own very tragic incident. John Richardson was the special effects artist for the film, which, as I mentioned earlier, had a heavy emphasis on the death scenes. Each death had to be as real as possible, with rational explanations beyond the supernatural. John was responsible for one of the most stand out and iconic death scenes from the movie. He created the special effects involved for the beheading of photographer Keith Jennings, portrayed by actor David Warner. A sheet of glass beheads Jennings as he attempts to retrieve the daggers meant to end the Antichrist. In a cruel and devastating twist of fate, John Richardson and his girlfriend, while driving through Belgium, were in a tragic car accident which resulted in her beheading. Harvey Bernhard draws a parallel to John Richardson’s work on The Omen while going on to claim that when John woke up after the crash, he looked up and saw a sign stating the next town was 66.6 kilometers away.

It is easy to look at these events and say that The Omen was, indeed, cursed. It had been said that the Devil did not want this film made, and this is one of the assertions for this curse. This assertion, of course, is an attempt to give reason to unexplained and tragic events. At the time the film was being made, bizarre things were happening. These events only served to bolster the hype around the film. A brilliant and continuous publicity campaign was launched, touting “The Omen Curse,” which further fueled the atmosphere of evil and mythos around the entire production. Pepper in the fact that they held several screenings on June 6, 1976, you can see just how invested the studio was in making this film larger than life (as well as making people born after that date extremely jealous that they were not able to see the film on 6/6/76, or maybe that is just me).

Many more stories are floating around out there that seek to reinforce the idea of a jinx, curse, or some other form of supernatural demonic forces. As the years have gone by, these stories have taken on a life of their own, making it difficult to tell fact from fiction. These events contain real people and real tragedies, so the importance of staying as true to the facts as possible goes without saying. The events that can be somewhat accounted for are both scary and fantastical on their own without any need for more. Even so, there is a sense of excitement when a film breaks through its reality and comes into ours. In the case of The Omen, it is (at least to me) a universe unto itself with brief events that overlap into our own. It’s hard to deny parallels between the ambiguity in the film and the ambiguity of the so-called curse.

If by now you have been converted to a true believer, or remain a hardened skeptic, at the end of the day, the film became one of the highest-grossing films at Twentieth Century Fox. It later became the fifth highest-grossing film of 1976. The curse publicity campaign certainly worked on audiences at the time. However, in keeping with The Omen tradition, Devil, or coincidence, it is for you to decide.

Make sure to check out Stephanie Edwards’ Cursed Films series coverage for more famously cursed films, including The Omen.