A period piece, as referred to in the world of literature, film and the arts, is described as a work that exhibits a fictional or real-world narrative within one particular historical era or time period. These could be dramatic, comedic, or even sometimes embellished as horror projects, as well. Apostle is one example of the latter. Upon its digitally-exclusive Netflix release in 2018, shortly following a brief debut at select film festivals, the historical horror set in early 1900s Wales has garnered some critical praise for many reasons, including those related to the design as well as the performances, to name a few. It’s got an interesting concept, as well, I have to admit. So let’s see why and how it holds up as far as that praise goes. 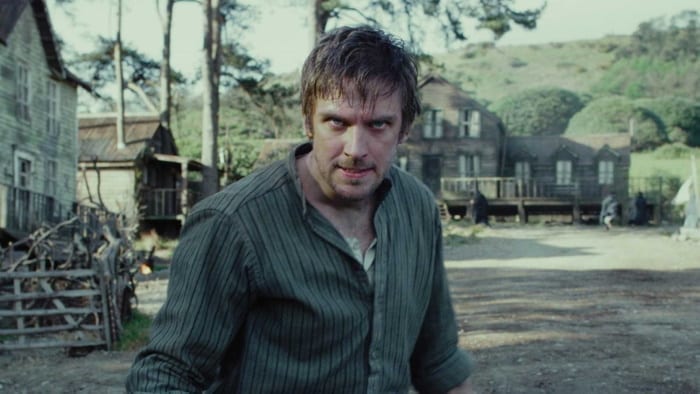 For starters, Apostle was directed by Gareth Evans, who is most notable for his work on action films involving martial arts (as can be seen in his The Raid films). So, upon realizing this, I was immediately surprised to see his name on this movie. This film is a drastic change of scenery, pace and genre for the filmmaker. Additionally, this movie stars a plethora of UK-based actors such as Dan Stevens from the widely acclaimed TV series Downton Abbey, Welsh star Michael Sheen, who is known for his roles in biographical films, and Lucy Boynton who’s been featured most recently in movies like Murder on the Orient Express and Bohemian Rhapsody among others.

The set-up for this one is rather mystifying, if at some points cliche. Essentially, this story revolves around a man (Stevens) who embarks on a mission to rescue his sister (played by Elen Rhys) from an obscure cult by posing as a prospective new member. Upon arriving, he meets the cult leader Malcolm Howe (Sheen) who, among others, is out seeking a co-conspirator to the protagonist’s captured sister, who is thought by the cult to be a treasonous spy held for ransom.

One thing leads to another and a ton of bloodshed occurs, with some hectic and dramatic back and forth between cult leaders and the protagonist (as well as amongst the cult itself) in addition to some supernatural elements thrown in later on. There are some twists and turns, and a few of those I didn’t really see coming, too. However, there’s also some of that cliche writing in the midst that often led me to groan more than anything else. 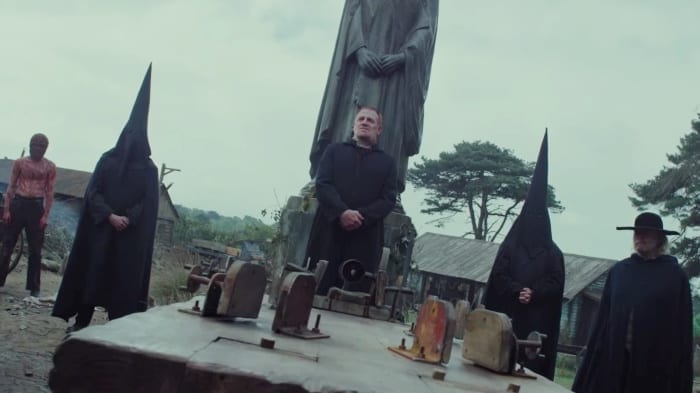 On the flip side, I have to say that the cinematography, acting, and attention to detail really caught my eye from the start, all of which helped to carry the seemingly flawed writing of the plot. The dialogue has that certain authentic feel to it, which made me feel like I was in the middle of the late 1800s/early 20th-century debacle at times. There are also some fairly inventive death scenes, one of which involves bludgeoning by a hand crank and another that includes immolation (AKA death by ‘firing’).

The supernatural twists caught me off guard, and the ending was far-fetched. It’s an ending that I have seen dozens of times before, to be honest. That aside, I have to also say that the performances by both Stevens and Sheen were top-notch. My favorite scene had to be the mutinous climax (which I won’t spoil too much here for obvious reasons). All in all, this flick had some historical attention to detail mixed in with horror nuances themed to a cult-like setting. A decent mix, in my book.

Despite some downsides of the screenplay here and there, most of the aesthetic appearances and outward performances related to Apostle were far above average in many respects. From the believable costume/makeup design to the superb acting by the main cast, it’s quite easy to see why so many individuals praised this one when it first came out. This one’s ultimately a surprising offering from Gareth Evans and a notably solid selection from the Netflix catalog. Check it out if you have the means to and if you’re into either period pieces or horror flicks with a bit of a twist to them… you won’t be disappointed. Though this one lacks the obvious martial arts and action-heavy cinematics of the director’s previous efforts, it’s still a flick worth your time.