Daniel Isn’t Real opens with a scene set in a diner. A waitress refills some coffee for a customer and there’s a little bit of small talk. Then, someone bursts into the diner after a few moments and starts gunning people down in a brief but effective use of diegetic sound and editing. Immediately cut to protagonist Luke’s home life, where his mentally unstable mother is arguing with his father, who is about to walk out of their lives forever. Luke takes a short walk and witnesses the crime scene at the diner with a front-row seat of the gunner’s corpse. An imaginary friend named Daniel appears, and there’s a montage of the two of them playing, pretending to go on adventures and having sword fights with brooms. Daniel then convinces Luke to mix some kind of medication into a shake for his mother, and after she recovers from the attempt on her life, she helps Luke lock Daniel away in a giant dollhouse they have in their home.

This all occurs over the span of about five minutes or so. It’s quite jarring, to say the least, but it puts you on edge in a way that’s difficult to describe. I had no idea what kind of movie this was going to be from that introduction. It turns out that it is an evil double/alter ego movie. Once some time passes and Luke is a twenty-something young man in college, he describes feelings of isolation and alienation to his psychologist and opens up about Daniel. The doctor then encourages him to open that part of himself back up, so he does. He lets Daniel out of the house, and his popularity immediately soars. He is a hit at parties with young women, he befriends an artist type, and he starts doing well in school—all thanks to Daniel helping him out in a variety of ways, including an amusing scene where Daniel strips his shirt off in front of a class during a math test with formulas written across his skin.

The movie’s biggest strengths lie in its atmospheric capabilities. As mentioned above, the editing in many scenes is odd and off-putting in a way that makes you uncomfortable. The sound design, in particular, is often overwhelming, particularly during scenes where Daniel is feeding information to Luke while someone else is talking. As someone who is rather susceptible to auditory overload, these scenes stressed me out to no end. But that’s the point.

Given that this is a horror movie, you can guess that Daniel eventually starts showing a darker side and tries to take over Luke. In one scene, he makes him commit a violent crime that puts his college roommate in the hospital. It’s effective at showing how Daniel is an overbearing, stressful, and constant presence in Luke’s life. To top it off, there are some really great visual effects that manage to look pretty solid despite the movie’s low budget, including a scene where Daniel wrests control from Luke by literally merging their faces. It recalls the likes of Hellraiser for its sheer weirdness in its effects (although actual gore is rather low), and that’s something I appreciate in any horror movie.

Performances are solid all around, too, with Patrick Schwarzenegger playing Daniel as a sometimes charming, sometimes childish, and usually menacing presence in a way that rings true. He is able to effectively poke and prod Luke in certain scenes and, as mentioned above, becomes an overwhelming screen presence as well. Miles Robbins as Luke is given the most to work with and does a very good job of selling Luke as a troubled but well-meaning young man. He really shines during the film’s final act where he is given dual roles to play. Both are the stars of the show and both are young actors to watch. Other characters are played well, such as Sasha Lane’s Cassie, but the issue is that most of the supporting cast isn’t given nearly as much material to work with as the two leads. 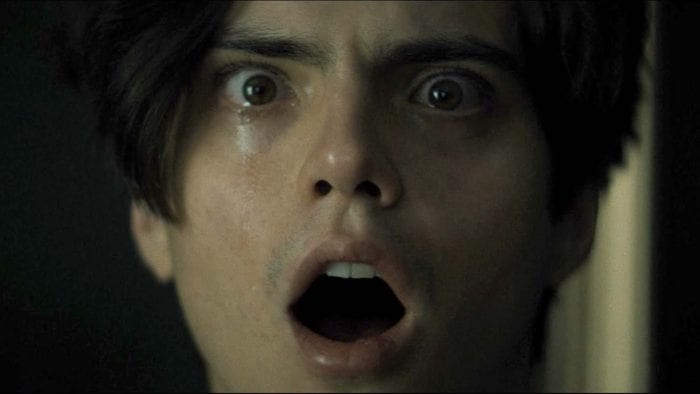 And this leads me to the main problem with the movie. There are numerous elements that feel underdeveloped, particularly Luke’s early home life. It’s clear from the rest of the movie that he has problems and that his unstable mother is a source of anxiety for him. She isn’t given nearly enough screen time to help us understand the family history, which becomes a crucial element of the story as Luke questions whether or not Daniel was passed on to him through genetics.

There is the whole side plot about his relationship with Cassie and some other students at college that feels rather token. Maybe it’s because I struggle to identify with pretentious art students. In one of the early scenes where Luke spends time at Cassie’s place, she mentions how she feels like she was “born too late.” This is entirely a personal pet peeve, but I’ve never heard that statement and not rolled my eyes so hard they almost did a 360 in my head. Their relationship is built off her seeing “some kind of darkness” in Luke, and that’s the kind of stuff I always struggle to connect with in movies like this. I get it, they’re both young college kids, but not every college kid has their head in the clouds that bad.

The other big problem is that the central theme feels muddled. Daniel Isn’t Real very obviously plays into anxieties about mental health, and it is very upfront about it. Like many other recent horror movies, it tries to tackle this difficult content by externalizing a mental conflict. It’s unclear for most of the run time if Daniel really is just a part of Luke, if he was a manifestation of mental illness inherited from his mother, or if he is something else entirely.

Once you learn the answer, it raises some problematic questions about the movie’s stance on mental health. It seems to exonerate the mass shooter in the movie’s opening by saying he was also troubled, which, to me, only further stigmatizes those who struggle with mental health problems on a daily basis. Then there’s the climax, which I’m sure worked better on the page of the novel the movie is derived from, titled In This Way I Was Saved. It comes across as incredibly corny in a bad way here, ending the narrative on a sour, largely unsatisfying note and only serving to further muddle exactly what the movie is trying to say about mental health.

Despite the decent performances and solid, weird special effects and set design (which I believe were done by the same company behind the magnificent Mandy), Daniel Isn’t Real is a difficult movie for me to recommend. The payoff in the third act is largely disappointing after its interesting setup, and the movie doesn’t resonate as strongly as it seems to think it does thanks to muddled messaging and underdeveloped but important side plots. I think its heart is in the right place, and it is certainly ambitious in a lot of ways, but unfortunately, those very ambitions often overreach its grasp.

A screener was provided courtesy of Shudder for the purposes of this review.