I love the ’90s. It could be because I was born in ’93, but the ’90s has always been so interesting to me. Maybe it’s an inherent fascination with the time period I was born in, but it’s always been intriguing to me. The way people dressed, the music, the colors, and so on. With that said, Idle Hands (1999) is quintessential ’90s to the core. It’s about a stoner whose hand gets possessed and. He unknowingly kills people until, eventually, he becomes aware and chops it off and throws it into a microwave only for it to escape and go on a rampage. Sounds weird, right? It is, and it’s awesome.

Idle Hands is directed by Rodman Flender and stars Devon Sawa (Final Destination), Seth Green (Austin Powers), Elden Henson (The Mighty Ducks), and Jessica Alba (Sin City, Fantastic Four). It’s essentially a stoner comedy horror movie and I’d call it a must-watch to get the full scope of it. Also, for future reference, I’ll be referring to character names and no actor names. The names are as follows: Anton (Devon Sawa), Mick (Seth Green), and Pnub (Elden Henson). I know there are more, but I really want to focus on those three as they’re the core.

To get this out of the way, I’m not going to say this is a review; it’s more of a discussion. I will be talking about specific scenes, so, fair warning. Now, let me gush about what I like about this movie. 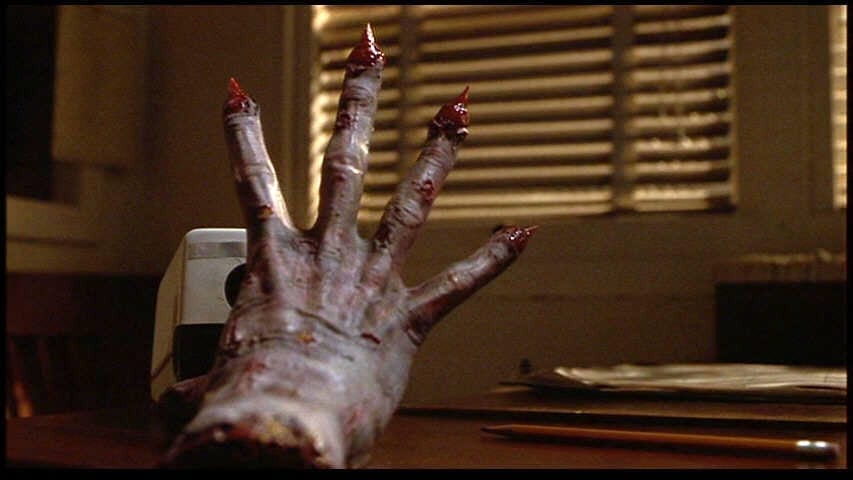 Firstly, is this movie scary? No, but the gore is fun and makes me feel like a little kid in a candy store. It’s mostly comical but it’s so fitting within the context of the movie. Let me go over a few of the great scenes of gore that caught my eyes. The first is when Anton kills his friends. He breaks a beer bottle and sticks it into Mick’s forehead, and, although there isn’t blood, it definitely looks pretty gnarly. Pnub’s death is my favorite death in the movie.

The focus isn’t on the actual death, more so on how it happens. Pnub runs into the basement, and Anton informs him that he can’t escape from there. As Anton is wildly flailing down the stairs, trying to stop his hand, Pnub’s face has a wide range of emotions: confusion, sadness, fear, and so on. All of them fill his face and eyes until Anton says he doesn’t want to kill him, to which Pnub replies with, honestly, the most realistic response. He says, “Then don’t!” It’s an absolutely obvious response, but it fits so well with how anybody would react in that scenario. After that, Anton tries to let Pnub run up the stairs and as he’s running up the stairs, Anton grabs a sawblade and throws it, decapitating Pnub. Great stuff.

Another great gore scene is when Anton finally chops his hand off. He gets Pnub’s severed head to chomp down on his hand and he takes his hand right off with a meat cleaver. Without missing a beat, Mick comes running in with a clothing iron and smacks it on Anton’s stub, making it sizzle. He hilariously points toward ER as a reason why he thought to do it. After the chopping of the hand, Mick and Pnub head to Pnub’s house to get some first aid and burritos. Yes, burritos.

Furthermore, when Mick and Pnub get back, Anthon isn’t there, so Mick sticks a carving fork into the bottom of Pnub’s head and reattaches it to his body. It’s just gross enough to make some people cringe and I love it. Anyway, they decide to have a snack and go to microwave the burritos. Unknowingly, they let the hand out of the microwave and it escapes. Does it matter to them? Well, it does get a “whoa” reaction from Pnub, so, there’s that. While Pnub is eating his burrito, he swallows and all of the fillings come oozing out of his neck. Awesome. To make it better, Mick gets some duct tape and wraps it around Pnub’s neck, securing the tasty, tasty fillings. Yummy. 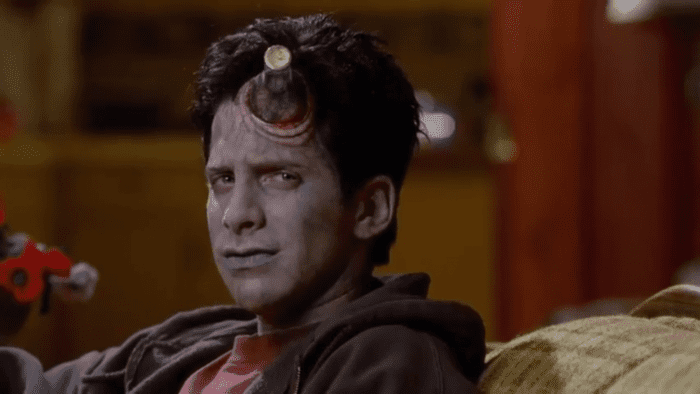 To be fair, nothing about the cinematography or score is going to blow you away. It’s nothing special, but it gets the job done. That’s really all that matters here. It’s not the focal point of the movie. The comedy, gore, and overall mood are what you’re here for. This movie isn’t for snobs. This movie is for people looking to have a good time, to have some fun, laugh, and know what they want from it. I mean, The Offspring is in the movie. What else could you want?

It’s very in tune with how teenagers would react to these scenarios. It’s almost like a commentary on the average American teenager in the mid to late ’90s. They’re not concerned with real things; they want sex, fun, MTV, and weed. A perfect example is Mick and Pnub using their undead appearances as costumes for the Halloween dance at the school in the last act of the movie. It’s kind of refreshing that this movie doesn’t treat the audience like they don’t know themselves. From the MTV references to the inhaler pipe that Anton uses to smoke weed, this movie just wants you to have fun and laugh. It perfectly captures the fun of Halloween and the child-like grandeur of the holiday to a science. 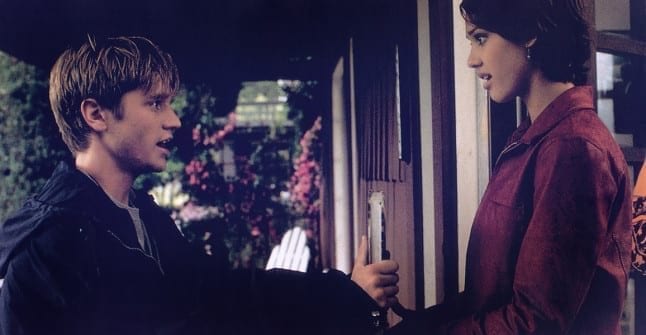 I know I haven’t spoken about Jessica Alba, but that’s because there’s really nothing to talk about. Anton has a crush on her character Molly; his hand essentially brings them together and that’s about it. She does her job: she’s charming and sweet. Another thing I’m brushing over is the evil spirit hunter angle that they drive in the movie. It’s nothing too special, but it serves a purpose. There’s an evil spirit hunter that is hunting Anton because an evil spirit possesses the laziest person it can find, it kills as many people as possible and takes one free soul to hell with it. It’s good in the sense that it ties it all together and adds a little more flesh onto the story.

At the end of the day, Idle Hands is an insanely charming piece of the ’90s and a vital horror comedy to watch if you like stoner comedies and horror movies. Is it a masterpiece? Not by any stretch of the imagination, but I believe that’s looking at it the wrong way. I know what I wanted—fun. It delivered and then some on that, and, for that, I love it.