The origins of survival horror can certainly be traced further back than 1996’s Resident Evil, but few games can claim to have been as influential. Many of the core mechanics of Capcom’s groundbreaking classic are still echoed throughout the genre. One Gruel Studio’s Heaven Dust is perhaps one of the more blatant attempts at recreating that original formula.

Advertised as a ‘love letter to ’90s survival horror’ Heaven Dust attempts to bring a distilled, nostalgia-laden experience of those genre-defining titles to the indie market. 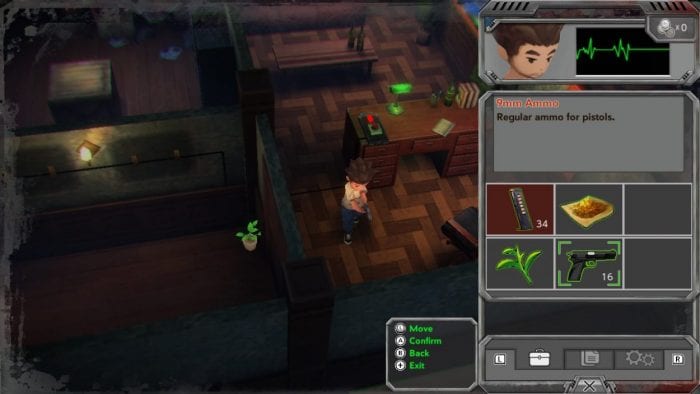 It doesn’t take long to see how closely Heaven Dust attempts to replicate Resident Evil‘s style. The game’s interface shows a grid of inventory slots sitting below a heart monitor, indicating the player’s health. When you start combining green and red herbs, any expectation of it being a subtle homage is quickly put aside. Heaven Dust is unashamedly a Resident Evil tribute.

From a visual standpoint however, the game has deviated noticeably from its source material. Featuring a fixed, isometric viewpoint, the player can clearly observe their surroundings; a sharp contrast from the cinematic camera used in Resident Evil. Furthermore, the player character is chibi-esque in design—more reminiscent of a Nintendo DS-era JRPG than a 32-bit survival-horror game.

It would be fair to assume then that Heaven Dust wants to present itself as a ‘lite’ take on the genre. Hardcore fans shouldn’t be dissuaded just yet though. What lies beneath might still surprise you.

The player begins locked inside of a small, cluttered room. Nothing is revealed about who, or where we are; only that we must escape. A melancholic piano melody plays softly, and a storage chest sits in the corner—both signalling to veterans of the genre that this is a safe space. A gleaming light sits atop a piece of paper on a wooden crate; it’s the Warden’s diary. Reading it doesn’t give us much to go on, but it does at least give us a clue on how to escape the room…

Solving puzzles in Heaven Dust feels like second nature to those of us who grew up playing Resident Evil. Some are straightforward, as simple as finding a key to a locked door for instance, but others are devilishly obtuse. Much like in the above example, careful attention must be paid to the many documents that can be found throughout the labyrinthine mansion. Here, not only is the (all-too-familiar) story slowly revealed to the player, but also the necessary information to solve the numerous puzzles. 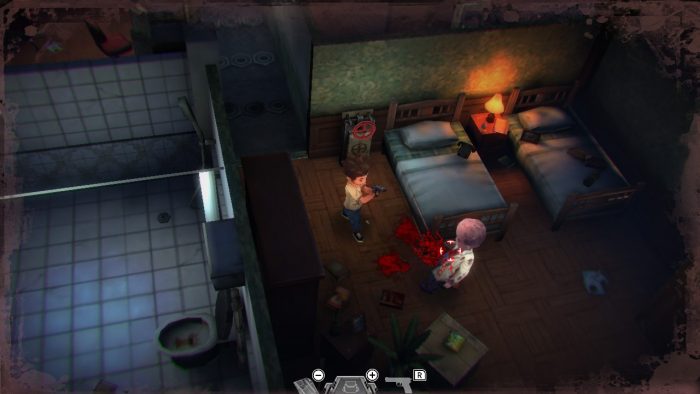 Observe and Look for Patterns

Locked doors that require a key-code are a common obstacle. Rarely though, does the game reveal the codes explicitly. Instead, the player is often required to deduce the three-digit number from information found in the many diaries of the previous inhabitants of the mansion. Most have left a handy reminder for themselves; perhaps a visual clue, often hidden in plain sight. One has you counting different objects in the room, another has you translating runic symbols.

Of course, the puzzles aren’t limited to finding key-codes. Various items are needed to progress. A battery, a lighter, a hand wheel—it’s all familiar stuff but I suppose that’s entirely the point. Whether it’s spinning statues, fixing broken pipes, or combining chemicals though, it all feels well thought out and suitably satisfying to solve. Don’t expect anything too taxing, however. Fun as they are, the puzzles are a little on the easy side. 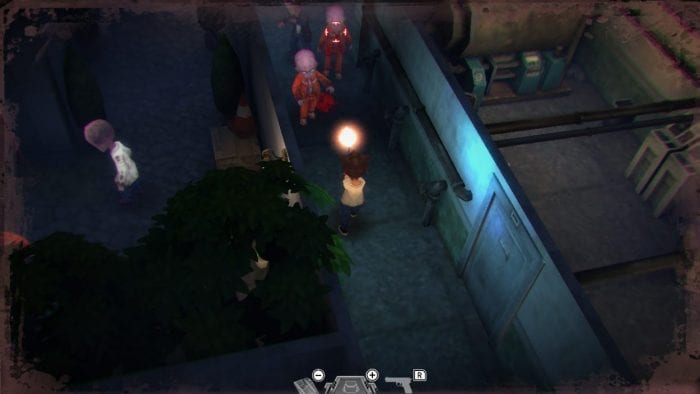 The mansion is, as you’d expect, riddled with zombies. Much like the player, the zombies are chibi-styled and—as a result—more adorable than terrifying. Nevertheless, they still serve their purpose of acting as a bullet sponge to rid the player of their scant ammo supplies.

The combat in Heaven Dust is enjoyable enough, though not at all tense. Only a handgun is on offer but it’s more than up to the task. In typical ’90s survival horror fashion, the weapon needs to be readied before firing. Doing so, locks the player in place and gives the shambling undead a sporting chance.

Due to the fixed camera position though, it’s a little too easy to run to safety in between shots, as well as helping to see incoming threats well in advance. Even so, the zombies still occasionally find the odd hiding places to spring out of and I’m ashamed to admit that I even fell victim to a jump scare at one point.

In my defence, that was in large part thanks to the game’s excellent sound design. Whereas the visuals offer a less intimidating survival horror experience, the sound authentically captures it to a tee. Loud footsteps, creaking doors, guttural groans all with lashings of reverb to give it that ’90s authenticity. The gunshots sound powerful and zombies squelch accordingly. It elevates most aspects of the game, making it feel less cheap than it perhaps ought to. 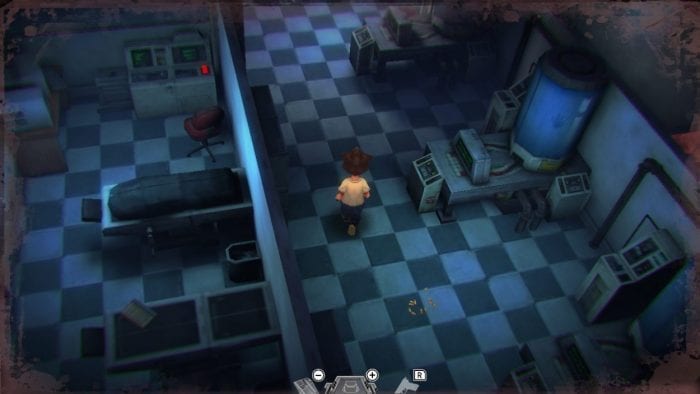 The Outbreak of Heaven Dust

Where the game truly shines however, is in the mansion itself. As with the best games of this genre, the individual puzzles become pieces of a larger whole. The tight layout of the mansion reveals itself slowly, requiring the player to make mental notes at every turn. Divided into four interconnected areas, a sequence of puzzles is usually performed in a single area. This is typically rewarded with an item that allows progress to a previously inaccessible location. Again, it’s nothing new but it is done very well.

As you’d expect, progress often involves plenty of backtracking, but thanks to the tightly packed layout it’s never a chore. In this respect, Luigi’s Mansion sprang to mind more than Resident Evil, and that’s certainly no bad thing.

Heaven Dust isn’t likely to set the world on fire. It’s attempting to offer an experience that many feel rightly belongs in the past. For those that do ‘get it’ however, it will undoubtedly provide a charming throwback to a simpler time. The experience only lasts a handful of hours but it’s more than enough to satisfy that ’90s survival horror itch.

If you always liked Resident Evil for the puzzles, then this is the game for you.