The low budget horror subgenre is essentially its own cottage industry: the director and producers put everything already available within their means, including the kitchen sink (makes a great weapon) to provide a personal, home-made project outside the purview and reach of a standard Hollywood system. It becomes a personal vision, a near singular endeavor, out of necessity.

Some filmmakers use what money they do have to showcase terrific gore effects, build that one great set, and/or hire one big star to raise the profile of the feature. But, in the end, it is the filmmaker’s devotion to a vision, limited only in scale but not thematic scope, that takes center stage. And sometimes that approach makes these films worthwhile (while in other cases it does not).

The new Shudder Original The Marshes seems to be one of the more successful personal visions in the subgenre as director Roger Scott, making his feature-length directorial debut, has dedicated a lot of time in making his film a more thoughtful exercise, adding an artful flair to the proceedings. Soaking the film in atmosphere (using the available locations to their maximum potential) and avoiding some of the more typical horror tropes, The Marshes provides a solid amount of scares even if its central thesis is slightly confusing. 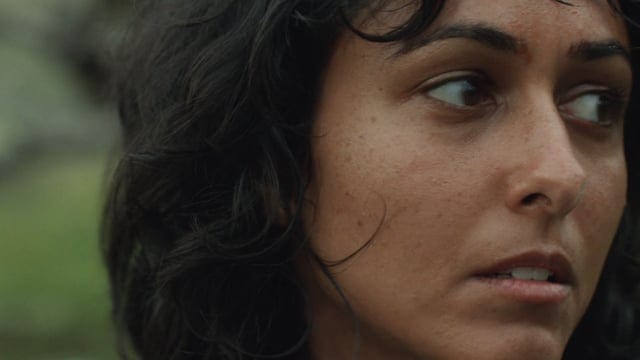 Scott starts his film in the credit sequence with magnified shots of terrifying microscopic lifeforms, emphasizing the science at play in the tag line “where science ends, survival begins”, perhaps indicating that within the substance of nature itself lies a horrific terror. Scott doesn’t necessarily stick to this concept; however, looking at the idea of objective reality (science) vs. subjective thinking (folk tales) instead.

It isn’t the first time Scott will get off course thematically as his core thesis remains ever in doubt. However, it doesn’t stop the proceedings from being compelling. In The Marshes, competing biology grad students Pria (Dafna Kronental) and Ben (Matthew Cooper) take undergrad Will (Sam Delich) out to heavily secluded marshlands to conduct research and gather data on a water project. Once they arrive, they are harassed by local “rednecks”, dangerous wildlife, and an unnatural fear of a folk tale boogeyman, who haunts the marshes with cannibalistic hunger and signals his coming with the tinkling of the cups and supplies on his person.

The idea of scientists being haunted by a mythical subject who disobeys the laws of nature (both space and time), the anti-thesis of science, is an interesting one. And Scott spends a lot of time showing his characters struggling less with a physical monster and more with the ideas of mythical ones. A lot of time is spent showing irrational fear leading to nothing which frays our character’s patience and sanity.

While the aerial cinematography of native Australia is breathtaking— including some wickedly frustrating (in a good way) shots in a maze of long weeds that form most of the film’s climax—it is literally hard to see what is going on at times (the film succeeds much better during the day than at night) and moments of confusion for the characters can sometimes come across as head-scratching for the audience. It is never made clear if characters are dreaming something or not and in the hands of a more experienced filmmaker, this would be more apparent. As it stands, sometimes it feels logic has fallen as opposed to the confusion being plot-driven. 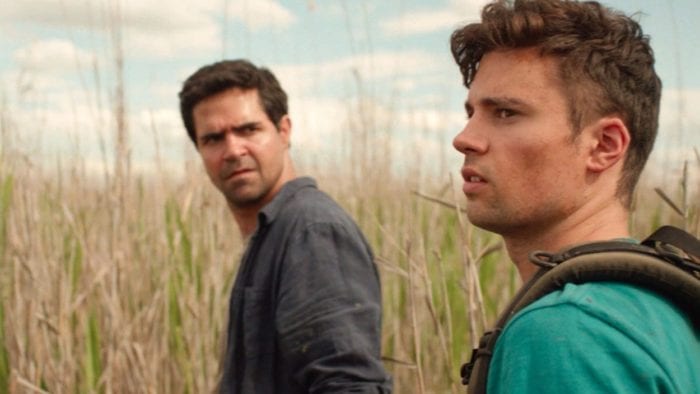 Plus, the science vs. folk tale idea doesn’t necessarily come to fruition as much as I would have liked. For instance, the constant look at natural life, from microscopic lifeforms to the everyday insects we barely see, doesn’t play much into the horror elements. It stands as a contrast to the anti-science horror of believing something unnatural, but it doesn’t pay off by playing directly into it. The main characters don’t use their science chops to solve any problems. The science literally exists to define the character’s jobs and external motivations and put them in a dangerous situation but not to aid them or support them in the end-all-be-all story itself.

But thanks to some good acting by all three leads (most of whom have limited acting credits; lead actress Kronental seems to be a psychotherapist/yoga trainer by trade) and an artful approach to the principal photography, The Marshes more than makes up for its negatives. For those looking to see some of the more untamed portions of Australia, The Marshes provides a vivid look at the surrounding environment, both on a micro and macro scale.

And unlike a lot of horror films, I actually cared about the main characters. The film isn’t bogged down in unnecessary back story, but I understood Pria and Ben’s relationship and thought Will was a realistic portrayal of an awkward young college student. I’m not sure if the romance angle works in a film like this, which is only 85 minutes long and has a lot of setting up to do, but one particular love scene does provide some interesting visuals (of what you can see anyway).

So if you are looking for something outside the norms of low budget horror…something intellectual and evenly paced, not particularly graphic or gruesome…to fill an evening, The Marshes is a solid hour and a half. It might confuse you, it might be hard to see at times, but it will transport you to Australia and maybe give you a nice shiver along the way.