After running for seven seasons on HBO, it was perhaps inevitable that Tales from the Crypt would make the leap from the small screen to the big screen. Based on the influential EC comics of the 1950s, each week Tales from the Crypt would provide a short, sharp shock of horror free from the censors of network TV, one often directed by a name such as Robert Zemeckis (Back to the Future,1985), Walter Hill (48 Hours,1982) or Richard Donner (Lethal Weapon, 1987), who also all produced along with Joel Silver. Even the likes of Tom Hanks, Arnold Schwarzenegger, and Kyle MacLachlan all had a go at directing an episode.

Before the show came to an end in 1996, the first feature-length movie made its debut in the traditional “dump” theatrical release month of January in 1995. The script for Demon Knight had been floating around Hollywood for a while and was snapped up by the producers with the intention of turning it into a big-screen version of a Tales from the Crypt episode. Spike Lee’s director of photography, Ernest Dickerson, who had recently made his own directorial debut with Juice (1992), was hired to direct. 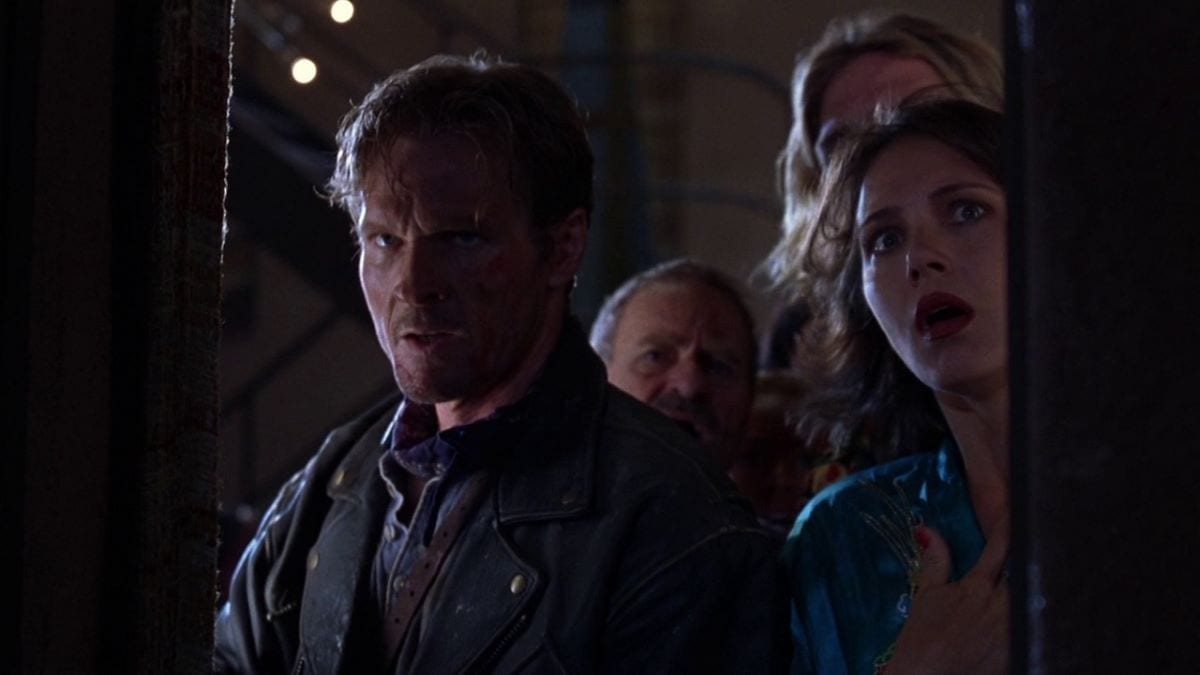 Bookended by pun-heavy, cheesy Cryptkeeper segments, Demon Knight starts off with Brayker (William Sadler) on the run from The Collector (Billy Zane). The pursuit ends in a car wreck, and Brayker makes his way to a run-down old church which has become a mission for the downtrodden. Inside, he finds no-nonsense manager Irene (CCH Pounder), drunk hobo Willy (Dick Miller), troubled postman Wally (Charles Fleischer), hooker Cordelia (Brenda Bakke), her a**hole boyfriend Roach (Thomas Haden Church), and former thief Jeryline (Jada Pinkett-Smith). The Collector soon arrives with a couple of cops he has conned into helping him, and it becomes apparent that the Collector needs the key artifact that contains the blood of several saints that Brayker has with him. Turns out The Collector is a demon of some sort who dispatches his minions into the mission to retrieve his prize, all whilst preying upon the weaknesses of the people inside to tempt them over to his side.

There is something so gloriously ’90s about Tales from the Crypt: Demon Knight. For their first feature, the creators decided to play it relatively safe with a riff on Assault on Precinct 13 (1976) crossed with The Evil Dead (1981), and then mix this with a tale as old as time itself about how the devil will always tempt the weak. Like most franchise outings of the decade, this had a soundtrack album of metal tracks that barely appear in the movie, as well as a novel adaptation, and all that was missing was a video game and comic book version. Regardless of originality, the actual film turned out to be quite a good time at the flicks.

This was the first proper horror film I saw at the cinema—I managed to get in when I wasn’t quite old enough—and it delivered everything I wanted at the time. I was at that point pretty much a gorehound at home thanks to The Evil Dead movies and Peter Jackson’s Braindead (1992), as well as browsing the pages of Fangoria at my local comic shop. Demon Knight delivered what I wanted to see finally on the big screen. Limbs are ripped off, people are disembowelled, people become demons with jaws hanging off, and tongues penetrate chest cavities. In one scene, where Cordelia is possessed, an arm is ripped off, a head explodes, and eyeballs are splattered on the floor, and I was in absolute heaven. Demon Knight was made on a relatively low budget and was at the weird period between the old school and the proliferation of CGI, so all of the effects work is practical or in-camera. The puppetry doesn’t quite hold up, but the organic nature of the effects work always pleases me, even now. 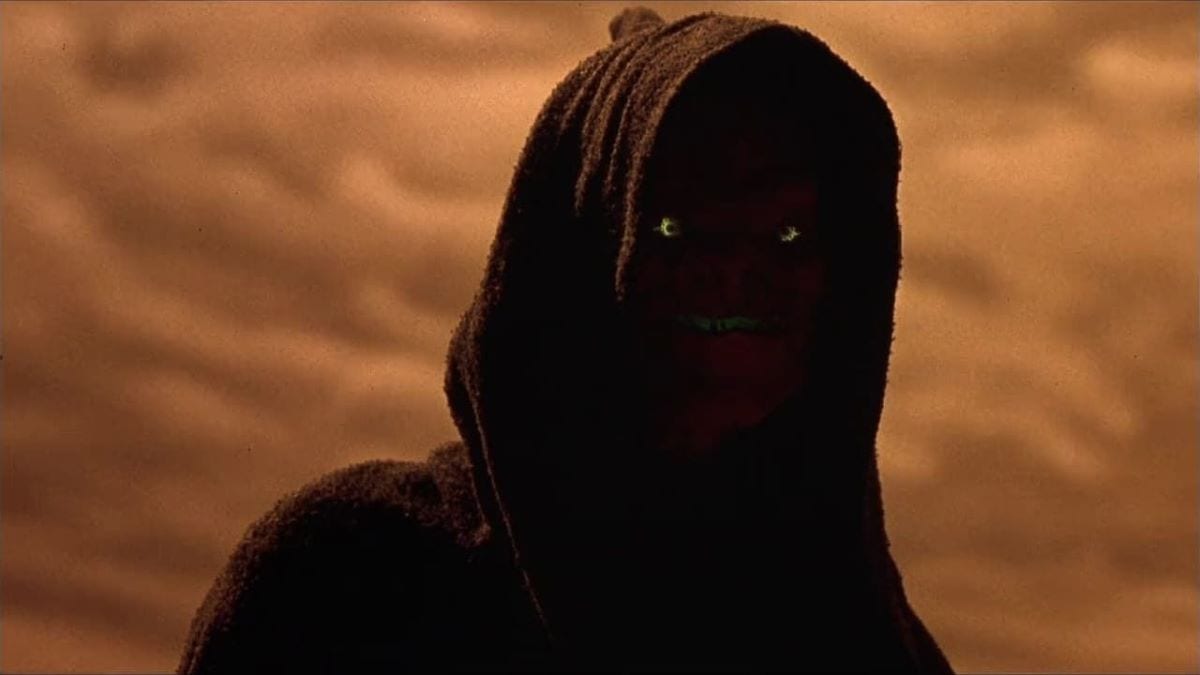 I really like the characters in this movie as well. They all have really brief and broad strokes in terms of introductions, but they do the job well so that you know what each has to contend with before they are tempted by evil. William Sadler was perhaps best known at this point for stealing the show as Death in Bill and Ted’s Bogus Journey (1991) and playing a villain in a couple of action movies. Based on his work here, it is surprising that he didn’t get more standard hero work, as he acquits himself well as the weary but determined Brayker. At the time, Billy Zane was perhaps best known as being really ridiculously good looking rather than for his acting chops. Yet in Demon Knight, as the villain, he gets all the best lines and is clearly having the time of his life. It’s a reminder that he is more than a pretty face when given the chance.

Kudos too to the producers of the time for allowing the story to go in a direction that was not typical at all in the mid-’90s. We talk online all the time now about representation and inclusion, and somehow Demon Knight was way ahead of this in terms of who actually survives and thrives at story’s end. It’s another aspect to the film that, despite the lack of originality, made it feel outside the norm at the time.

Regardless of the actual quality of the finished film, Demon Knight made a small profit of $21 million from a $13 million budget. It’s not really the case now, but for a long time, January and September were seen as “dump months” in which studios would banish the films that usually lacked quality or inspired little faith. This is where a majority of horror films would be released, but there were some great ones sneaking out every now and then, and Demon Knight is firmly of that crowd. It was successful enough to lead to another movie from the Tales from the Crypt franchise. 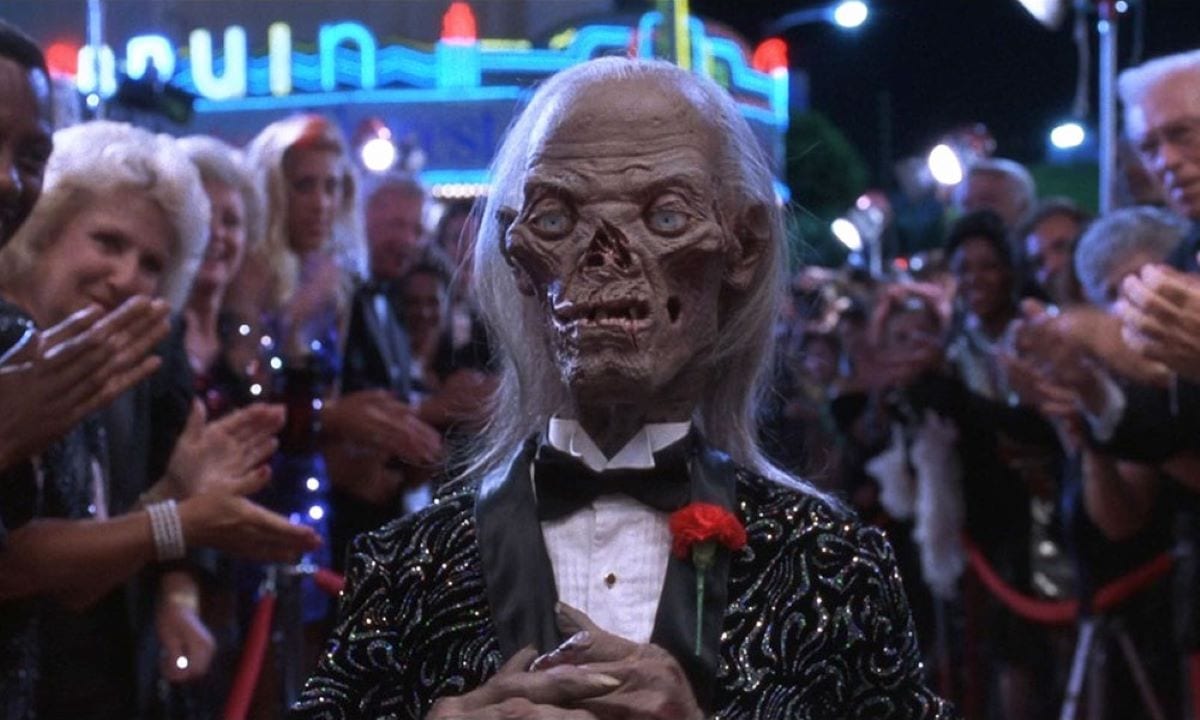 Now, depending on who you speak to, there was a point where Quentin Tarantino’s From Dusk Till Dawn (1996) script was meant to be the next Tales from the Crypt outing. A post-credit scene on the digital version of Demon Knight that I have reveals the Cryptkeeper telling the audience it would be called Dead Easy, which was apparently a zombie story set in New Orleans. Neither of these films next; instead we got Bordello of Blood (1996) a mere year-and-a-half after Demon Knight. Bordello of Blood is an awful film, badly directed, badly acted, and just plain cheap. It was apparently plagued by behind-the-scenes production troubles, and it shows. It flopped massively at the box office in the summer of 1996, and the cinematic Tales from the Crypt franchise was dead. They released something under the moniker called Ritual straight to DVD sometime later in 2002, but this didn’t have the Cryptkeeper bookends and was even worse than Bordello of Blood.

Tales from the Crypt was mooted to return to TV (well, streaming) a few years back with the involvement of M. Night Shyamalan and John Kassir back to voice The Cryptkeeper. This version has since been cancelled and now seems stuck in limbo. With anthology TV all the rage thanks to Black Mirror, it surely won’t be long before this franchise rises from the dead again with its built-in brand recognition. Demon Knight remains great horror entertainment and a solid start to something that should have run in cinemas every year for the rest of the ’90s. Sadly, it was not to be.