Warning! Spoilers for Us, You’re Next, and Hush are invading your home.

My wife and I differ on horror movies. According to her, the scariest things are ghosts, devils, and the unexplained terrors of the world beyond. To me, it’s people with knives, guns, and axes breaking into my home. Ever since I saw Michael Haneke’s 2007 remake of his own Funny Games as a teen, I’ve been utterly terrified of someone coming into my house and destroying my life. In spite of this crippling fear, I drown myself in home invasion movies, perhaps as a way to better understand why it bothers me more than any ghost, monster, or demon.

After some introspection, I’ve come to a conclusion. Horror is a contract between the scarer and the scared. We invite the horror in, sending our instant RSVP cards to Netflix and Amazon until they ring our doorbells and play out in our homes. I consume most of my horror these days in the walls of my apartment. The films can be gruesome, violent, ugly, repugnant, and genuinely mean, but they do not come unbidden. That contract puts me in control. I can always turn the TV off. A home invasion film, when done well, destroys this tacit understanding and reminds the viewer that horror doesn’t always wait for our invitation, or leave when we want it to. 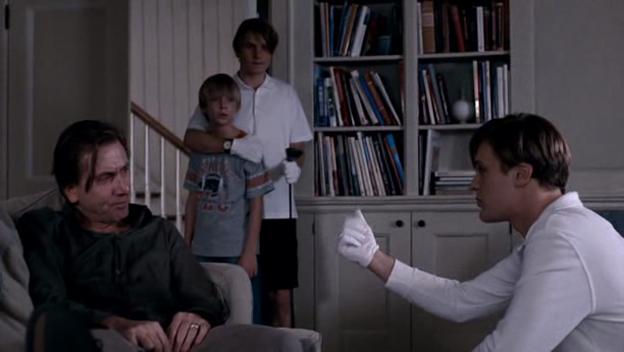 From a storytelling perspective, Home Invasion has its appeal through its simplicity and minimalism. An invaded home is one location, after all, and usually, the architecture and layout can be inspiring in itself. Also, unless it’s one of the rare cases with a supernatural twist, Home Invasion films are often grounded and realistic, which means there aren’t as many outlandish special effects. This replicability and simplicity allow for narrative layering, and suddenly home invaders can become metaphors for anything under the bloodthirsty moon. I’ll be exploring what those metaphors can mean in the varying interpretations, specifically in Jordan Peele’s Us (2019), Adam Wingard’s You’re Next (2011), and Mike Flanagan’s Hush (2016).

Jordan Peele’s Us is an impeccably crafted allegorical home invasion centered around a family unit. Tied to a failed government experiment during the Reagan era, the invaders are generated clones that break free from their underground prison and attack their doubles. Much has been made by way of interpreting the invasion, the symbolism of scissors and rabbits and the various allusions packed into Us’ antagonists. They represent a resurgent class, a vengeful neglected entity comprised of people just like our protagonists, except for the circumstances of their birth. Their origins as 1980s government experiments are intentional in that they point the finger directly at the architects of Reaganomics and conservative economic policies that widened the gaps between rich and poor. The use of a black, heteronormative family brings this into focus, as so much of the 1980s conservative politics was wrapped in the guise of preserving the American family. 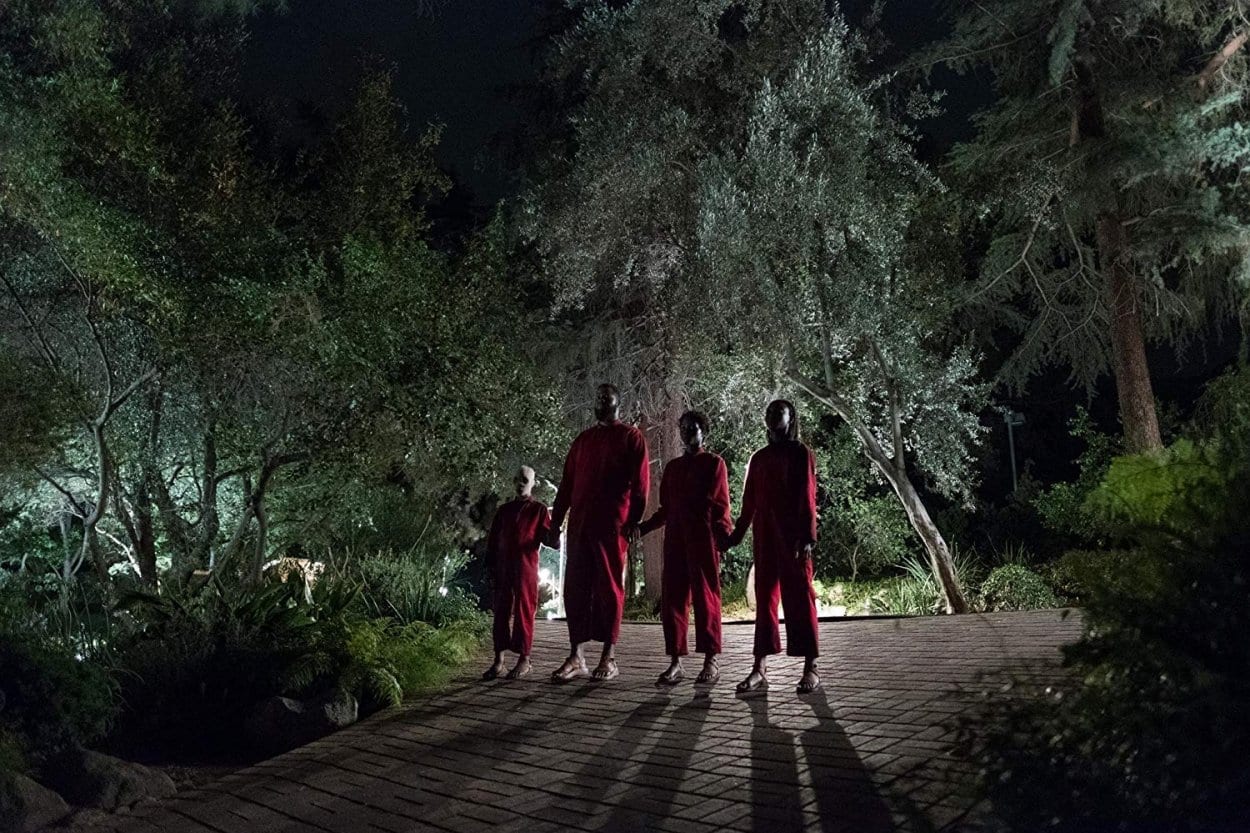 The decision to introduce the sinister doppelfamily, known in the film as The Tethered, as home invaders intentionally throw into question the notion of the home itself. The Tethered look like the family they’re attacking, and barge into their space. The scariest thing about the ones we’ve ignored, the ones we from which fear reprisal, is that they look like us. For the most part, we’re the same. Jordan Peele masterfully uses the device of the double and teases a many-headed hydra of meaning from its bloodshed.

Are the Tethered the monstrous past of America, the red cloaks a stand-in for the pejoratively described “red skins” of Native Americans resurfacing from the dark corners of the country seeking to reclaim their real homes? Are they the specters of Peele’s many detractors, determined to guilt him for making Get Out and marrying a white woman in the same year? Are their scissors the threat of disconnection from the black experience, common anxiety in anyone of biracial upbringing, someone torn between two worlds feeling conditioned to fear one and feeling adrift in the other? Are they the characters’ repressed selves, the rabbits they eat acting as allusions to the illusions they’ve put in between their loved ones and the secret unspeakable truths of their sins? None of these conventions could be as pointed or as obvious without the initial violation, the initial setting of safety: the home, and its subsequent invasion.

Similarly, the more action-focused thriller You’re Next from Adam Wingard and Simon Barrett has a subtle political interpretation that exists because of the home. When a family reunites to celebrate an anniversary, they fall under attack by masked intruders with crossbows and knives. One of the family members’ girlfriends, Erin, played by Sharni Vinson, proves to be more than the killers can handle, and their plans begin to unravel. The killers, it turns out, are hired mercenaries commissioned to kill the parents for their inheritance. More straightforward and accessible than Peele’s Us, You’re Next favors audience reaction and airtight plotting over symbolism, but nonetheless, something is creeping into the film wearing the masks of a thrilling horror film. The hired killers are veterans, treated more like weapons than human beings by the supposedly progressive and quibbling elites of the family. 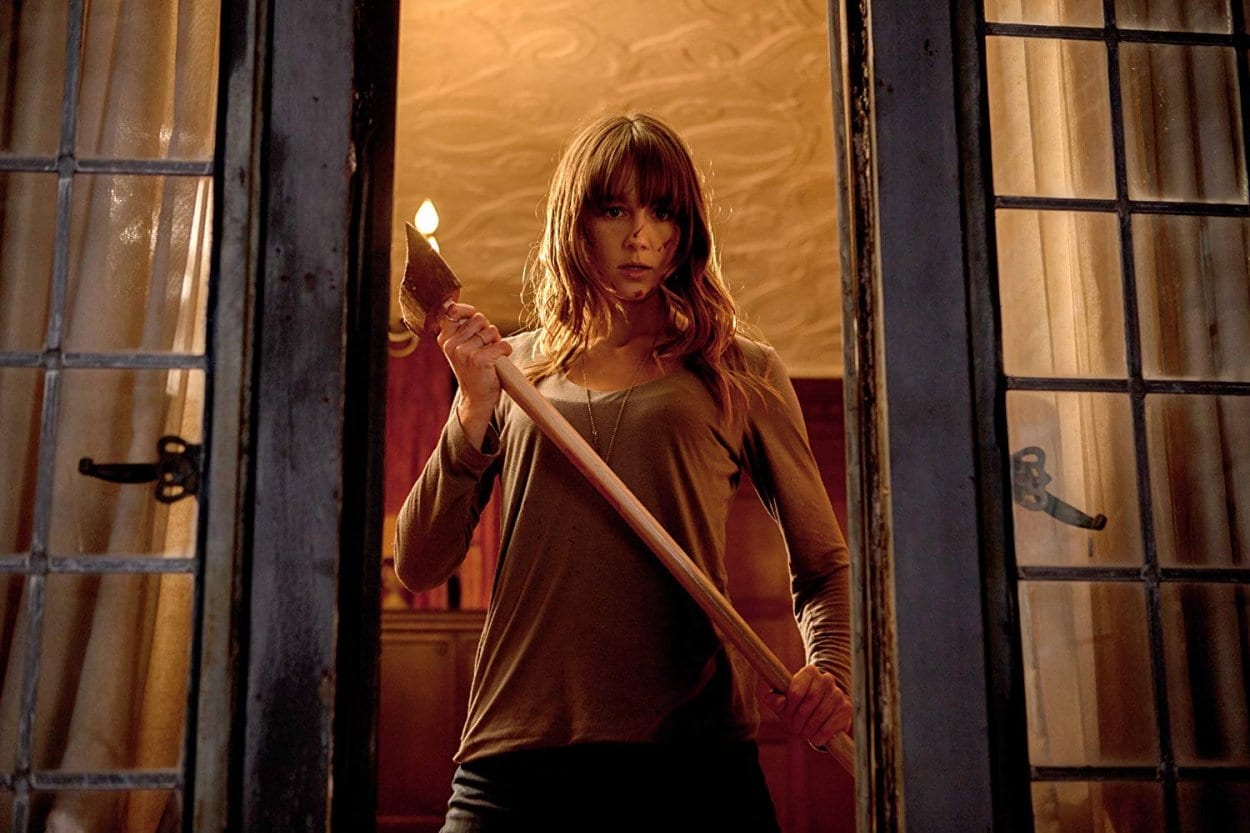 There’s something of class warfare, with more resentment and anger at the liberal elites and their duplicitous hand in the violence and chaos of the numerous wars America was entrenched in at the time. The grown children of You’re Next abhor violence and conduct themselves like characters in a Moliere parlor comedy, but they literally commission the death of their parents for money. The mercenaries, by contrast, are humanized and made vulnerable, which creates an ever-evolving tension between what we initially feared and what we come to fear by film’s end. At the center of this storm is Erin, the archetypal outsider, unable to relate to killers who live in a world of violence, and elites who keep violence at arm’s length while profiting from it. The invasion of the family home as the backdrop for the film gives it the texture and legacy it needs to be about more than a family. It’s about a tradition of using violence with a non-violent face, about shying from accountability while acting like villains.

But the home invasion isn’t always political. There’s an intimacy about the home and something inherently traumatic in its violation that Mike Flanagan explores brilliantly in 2016’s Hush. A deaf author lives alone in a house in the woods, only to be targeted and terrorized by a masked killer. What follows is a harrowing game of cat and mouse between Maddie, the author played by Kate Siegel, and the Man, played by John Gallagher Jr. In the film’s setup, Maddie admits to a visiting neighbor that she struggles with her self confidence and her ability to succeed as an author. She is plagued by doubts. Flanagan uses the extremity of a home invasion, a masked killer, to personify Maddie’s doubts about her ability to survive. She’s battling for life with every crossbow bolt and locked door, but she learns to fight for her livelihood and trust herself to accomplish her dreams. The man begins with a mask on, symbolizing doubt’s ability to assume any identity, wear any face, until it can’t. One of the film’s turning points is the moment when the Man removes his mask and shows Maddie his face. From this point on, the doors are locked on their game and no one can just walk away. It means that Maddie must die or defend herself. It is also the moment where she realizes that the threats, the obstacles in her life aren’t her own limitations. They’re imposed upon her. They’re invaders to her home and her mind. The home in Hush is as much an internal one as a literal structure of wood, stoves, and such.

The simple canvas of a threat entering a home becomes a thing of limitless potential to artists in the horror genre with something to say. It becomes a perfect distillation of horror. Safety, suspense, conflict, and survival are linchpins of any good scary story and all of them are present and proud in any home invasion story. Whether allegorical specters of racism, personifications of accountability, or the lingering doubts in a young woman’s mind armed with a mask and a crossbow, the invaders are coming, and it’s up to us to keep our homes safe.