Horror is almost always a niche in entertainment; in some cases, a particularly small one. Scary movies play second fiddle to mainstream blockbusters. Horror games, while much more accepted today than in the past, still don’t reach the commercial success of larger triple-A titles. Which do you think sold better, the Resident Evil 2 remake or Red Dead Redemption 2? Saddle up.

For that reason, horror games don’t generally flood the market at release, nor do they see consistent re-stocks in the way that more significant titles do. Digital marketplaces are sometimes an option, but older titles often don’t see their source code resurrected and housed in the heavens (i.e. cloud storage). Therefore those interested in snagging a copy are relegated to second-hand markets and online auction sites.

Limited runs and beleaguered access to these titles makes them no less of an essential to the genre. Their stories are to be experienced; their characters to be acquainted with. And while this is best accomplished through first-hand experience, sometimes blogs and Youtube videos may be the only way to enjoy the spoils of a game that was released way back when.

As is the case of Rule of Rose, because unless you’re willing to fork over a whole lot of cash you ain’t getting a copy.

Mix the psychological aspects of Silent Hill with faint elements of Haunting Ground (namely the canine companion), frost it with a clunky battle system, and sprinkle with a dash of inane backtracking and convoluted story, and the resultant product is 2006’s Rule of Rose. Produced by small Japanese studio Punchline at Sony’s behest (who would eventually pass up on publishing the title), the game would find its way to Western shores through the efforts of Atlus USA.

Rule of Rose is a bit of an enigma wrapped inside of a mystery. The game jumps back and forth between the perspectives of both the child and adult version of lead character Jennifer and explores the dynamic between female children and adults. The story is a slow-burn and will likely haunt you long after the credits roll – that is, if you hang around that long. Finishing Rule of Rose is a battle of attrition. The rewards are bountiful, but the effort to get them can feel insurmountable.

Early 1900’s England finds Jennifer amid things that, quite frankly, aren’t going to make a lot of sense no matter what words are used to describe them. But here goes:

The Red Crayon Society, consisting of a group of mean girls, employs a hierarchical ranking system of its members. Poor Jennifer finds herself at the bottom of that list, which puts her under constant threat of death. The only way to improve her standing among the organization is to make a peace offering every month.

Jennifer, convenient to the plot, suffers through some amnesia. As she regains her memory, she remembers having been cared for as a child but also being coerced into leaving her safe confines by her friend, Wendy. Said friend is someone Jennifer encounters as a both a child and an adult, but then again as a child in an odd time-jump narrative. You’ll befriend a canine named Brown, but aside from those two, Jenny is pretty much chopped liver to everyone else. Some plot twists see Wendy go from sickly sidekick to the omnipresent leader of the Red Crayons. Jennifer will also find her status, and favor within the group change as the game progresses. The setting jumps back-and-forth between an orphanage and an airship.

Yes, an airship. Like in Super Mario Bros. 3 or Final Fantasy. Because why not.

In trying to make the story psychologically creepy, the developers ultimately succeeded in making it very complicated, and at most times, rather difficult to follow. Rule of Rose is not a game that you can play sporadically over weeks or months and still enjoy a deep sense of immersion. This story is best consumed quickly and as consistently as possible, lest you forget the integral points.

Don’t Look Under the Hood

Rule of Rose isn’t a great game, not by any stretch of the imagination. The gameplay mechanics are broken. Combat is relegated to melee attacks, something that Jenny isn’t terribly adept at. Her attacks are weak, slow, and hit detection is spotty at best. While ambulation in-between enemy encounters happens at an average cadence, when engaged in battles things slow to a snail’s pace. Fight at your discretion, and there are moments when you’ll simply have no choice, but generally speaking avoiding conflict is the best course of action.

Backtracking. It’s the bane of every gamer’s existence, and it’s a tedious task in even the best of games – which Rule of Rose is not. So when you’re forced to head back to previous areas in search of necessary items, it feels like even more of a chore. In an undeniable nod to Haunting Ground, Jenny is accompanied by her canine companion Brown. He can distract enemies and help guide her to points of interest for the sake of story advancement. He serves as a bright spot in an otherwise ho-hum game.

The Heart of the Matter 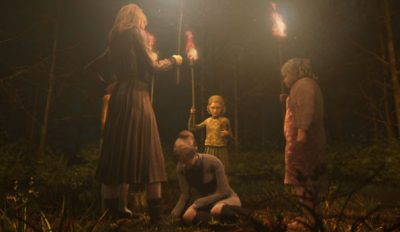 The story is a mess. The mechanics are shoddy, and just playing can feel frustrating, let alone sticking around to the very end. With all of that said, why exactly should it be considered a Horror Gaming Essential? Because it’s disturbing in ways that other games simply are not.

For what it lacks in solid gameplay execution, it more than makes up for with unsettling imagery and creepy visuals. The musical score is chilling – dark, melodious tones are sliced to ribbons with razor-sharp violin strings, proving that auditory jump scares are effective.

Although the material presented in Rule of Rose concerns children, the sentiments are very mature. Themes of loss, peer pressure, and sexuality proliferate the otherwise murky story. It strikes at your psyche. There’s an impending sense of dread that compounds through every beautifully-rendered cut scene, and it never affords you a moment to catch your breath.

For every piece that doesn’t work, in terms of overall presentation, it manages to fire on all cylinders.

Rule of Rose didn’t get a widespread release. It didn’t get great reviews either, and even finding a copy during launch back in 2006 was difficult. It was a PS2 exclusive that Sony refused to publish due to the controversial subject matter. The UK outright banned it, misinformed as to scenes of child murder. None exist in the game whatsoever.

It never received a proper digital release or remaster, and it’s highly unlikely it ever will. Second-hand copies are available with enormously inflated price tags, so technically, anyone willing to part with a couple hundred bucks can still add Rule of Rose to their collection. But even if you never get the chance to own a copy or even spend a few hours playing it first hand, this isn’t a title that should ever be forgotten. Search out the blog posts, share this one, find other people with an interest in this game, watch a few videos, and most definitely find a link to stream the soundtrack.

In the context of great video games, this isn’t one. But in the grander scheme of horror entertainment, Rule of Rose is an exquisitely executed work of art whose whole is so much better than the sum of its parts.