Rob Zombie’s films are an acquired taste, but that would mean you would need to have a taste for his work in the first place. His movies are like your tastebuds evolving to enjoy Brussel sprouts. The first bite might just make you throw up, you taste it some more, and eventually, you think it’s the best thing to come along since peanut butter M&M’s. When you first set eyes on a single frame of a Rob Zombie movie, my guess is you will undoubtedly hate it. I did. My first introduction to this “master of horror madness” was a viewing of House of 1,000 Corpses, and I distinctly remember reaching a point where I had zero fun. Like a frightened child on a roller coaster, I wanted off. Dead bodies in a basement, characters with their stomachs ripped open, and people being burned on a pile of sticks. What the hell was this? THIS was cinema? How could anyone consider this art and not view it like a trip to the torture chamber?

The years went by, I watched more of Zombie’s films, I became a bigger fan of the horror genre, and before I knew it, I was singing the praises of a film like The Lords of Salem. You might wonder, how could I call a director that has a Rotten Tomatoes score average of 36% an “artist”, but like it or not, Rob Zombie makes cinema in his style, in his way, and the horror genre is ten times better for it. He might be using blood for paint and severed fingers as his brush, but Rob Zombie has become one of the horror genre’s most unique voices to date.

The argument I want to make today is that even though some of Zombie’s films are objectively awful, he has proved that you can be an artist of cinema by sticking with the work, no matter how vile some will find it. If there is one director where the auteur theory fits, Zombie might be at the top of that list. His style is obviously inspired by some of the greats in horror, Tobe Hooper and Dario Argento come to mind, but every story he tells is never the same, yet always dealing in similar themes. 1,000 Corpses is his Texas Chainsaw Massacre, with people lost in rural America, and their only refuge from a demented collection of outsiders. The Devil’s Rejects, arguably Zombie’s best work, continues the story, with the wild outsiders now displaced from their sanctuary, wreaking havoc on the road. This was, in many ways, Rob Zombie’s moment to be taken seriously.

We see plenty of movies & television with antiheroes and home invasion movies such as Wes Craven’s The Last House on the Left or Scream, brought fear to the American public. Devil’s Rejects, however, brought the horror to the highway and asked the audience to cheer for the murders. It wasn’t a celebration of violence—all of Zombie’s films should be left on the pages or the screen—but it was a narrative that shocked us, had us talking, and asking the audience exactly why they would cheer for a trio of mass murderers? Did you cheer for Tony Soprano? You cheered on the Goodfella’s. Yet, when we see the likes of Sid Haig in clown makeup, Bill Moseley shirtless with the hair of a christlike figure, and Sheri Moon’s Baby maniacally laughing with every kill, is this when we should become repulsed? Is their violence less acceptable than others? Zombie wants to veer away from our expectations and at the time, the horror genre had not seen anything else like it. When Zombie moves away from original filmmaking, this is when he loses a bit of his edge, but where does this origin of rage, a passion for the obscene come from? Everything you could ever want to know about Rob Zombie’s inspirations or what drives him in making movies must involve a conversation about his treatment towards women and his glowing muse—Sheri Moon Zombie.

One of my biggest problems with all of Zombie’s films, specifically the deadliest game-style killing spree that is the movie 31, has been his treatment to women. In almost all of his works, women have been cast as the tramp or the prostitute, a mother that mistreated her son, or in the case of his two Halloween films, damsels that need saving from someone else. And yet, there she is in every one of his movies, Sheri Moon, often playing the lead, seldom the victim of violence, and always the focus of the camera. The two do not need to be mutually exclusive, but it helps that Zombie has made his wife his main source of inspiration because there is an argument that he treats female characters worse than Quentin Tarantino.

That is not to say that Zombie does not have a side that loves women either. Nothing is more evident of his appreciation for the opposite sex than The Lords of Salem; a movie that honors a woman battling depression, sinking into a place of loss, and rising above like a beautiful goddess of satan. This is a high point in Rob Zombie’s career, where he made a film that felt adult for his style, and yet it is most likely Zombie’s least celebrated film. The lack of response to Lords of Salem, both critically and commercially, undoubtedly is what led to the work retreating back to the in-your-face, hardcore violence, that not only lacks style, but also lacks purpose. 31 is a painful cinematic experience and with each installment into his filmography, the polarizing effect sums up the hills and valleys of watching Rob Zombie’s work. You will hate one film and it can be followed up with 3 From Hell…

The third leg of Rob Zombie’s trilogy is shockingly his most mature film yet. Similar to the way Quentin Tarantino showed restraint with Once Upon a Time…In Hollywood, it may have taken seven attempts to get there, but Zombie has made a movie that is more of a hangout experience than a trip to hell. Taking place in the ’80s, featuring a mixture of super-8 video footage, this becomes one last road trip for Baby (Sheri Moon), Otis (Bill Moseley), and Winslow Foxworth Coltrane (Richard Brake). That’s not to say 3 From Hell is void of bloody violence. The grand build up to 3 From Hell is a gathering of loose cannons just before they face off in a bullet sprayed shootout with a Mexican gang. There are plenty of moments that will keep viewers in the corner of hating Rob Zombie movies…and that is okay. That is the ultimate argument that I am making. You can love and hate movies directed by Rob Zombie. Some fans, such as myself will grow with his work and others will still be repulsed with every frame. What cannot be denied is that Rob Zombie is an artist, pushing the boundaries, testing our stomachs, one bloody movie at a time. 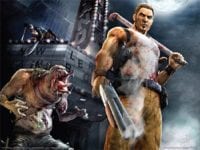