Did you love Resident Evil 4? Sure you did. Universally speaking, anyone that has spent time playing the game enjoyed it. Capcom reinvented the brand at a time when it needed it most, and in doing so abandoned some of what brought the series to the dance to begin with. Namely, that meant casting aside a few of the shackles of “survival-horror” – a genre they themselves helped create. RE 4 would be an action-horror hybrid that would go down as one of the Greatest. Games. Ever.

Nine months prior, however, Surreal Software beat Capcom to the punch with a creation that seemingly followed the same blueprint. Start with a core foundation of frantic run-and-gun mayhem and paint it with the familiar hues of horror in a way that does both styles justice, and gamers will forever appreciate your offering.

We did then. We do now. It’s called The Suffering, and if you haven’t played it, shame on you.

A Ghost of Gaming’s Past

Midway Games is but a bygone staple of the gaming industry, lost to bad investments and poor business decisions. Best remembered for publishing Space Invaders, an array of pinball machines based on licensed movie properties, and the beginnings of the Mortal Kombat series, the company tried its best to stay relevant even as the walls were closing in. A few years before finally filing for bankruptcy and having their assets divided between studios like THQ and Warner Bros., the company launched what was intended to become a new franchise.

The Suffering brand had all the milestones of a successful series, embodying different gameplay styles in an attempt to pique the curiosity of multiple genre fans. Action lovers could go in with guns blazing, while horrorphiles could wade through rivers of the red stuff. While the company would shutter with only two titles under The Suffering umbrella, alternate endings and branching storylines in both games would provide enough content to players for years to come. 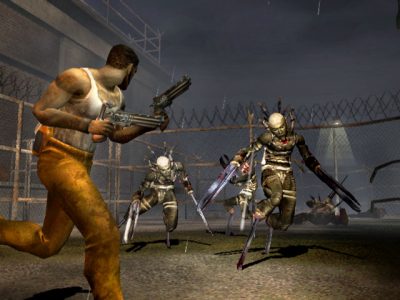 Conscience and morality are traits generally left up to a player’s interpretation, but in 2004’s The Suffering, they serve as an in-game mechanic that can influence the culmination of the story.

Death Row inmate Torque is awaiting execution in Abbot State Penitentiary for the murder of his ex-wife and children, a crime he has no recollection of committing. Turns out Torque is prone to blackouts, during which he transforms into a beast of rage capable of causing mass destruction, an inventive element that serves as both a character quality and game mechanic represented with an on-screen insanity meter.

Sharing some storyline parallels with Manhunt 1 and 2, Torque is on death row and can’t remember why. Finding himself freed from his cell after an earthquake and in the presence of murderous abominations, Torque puts boots-to-linoleum and treks out to get to the bottom of things. The ensuing story plays out over various locations around the prison and surrounding Carnate Island; there’s as much time spent exploring the great wide open as there is the confines of a ruinous prison.

In true action game fashion, melee weapons allow for close-quarters combat, as well as heavy artillery for ranged attacks. The enemies in need of dispatching are wicked creations to witness, with many based off some manner of penal punishment. This includes monstrosities inspired by lethal injection, death by firing squad, and even being buried alive. There are a smattering of bosses to deal with along the way, which while ominous in their own right, don’t quite embody the same creepy design aesthetic as their minion counterparts. Also, expect a few puzzles to sort through, but no single one is throw-in-the-towel difficult. 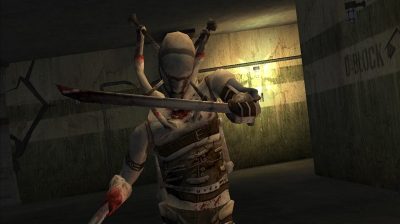 For all its praise and commercial success, it’s easy to write The Suffering off as just another action/horror hybrid. However, players will find themselves having to make decisions at critical moments throughout the game, challenging individual perceptions of virtue and ethics. Typically found in moments involving NPC’s, choices will have to be made between good and bad options, or Torque can simply turn his nose up and walk away in a display of neutrality. There’s a trio of endings to be had, with each option influenced by the displays (or lack) of kindness the player has decided to show.

The Suffering was made available on PS2, Xbox, and PC, and impressed many who played it. The set pieces were creepy cool, the battles were intense, and the story dragged players kicking and screaming through some genuinely dark material. Characters will live and die at your hands, by your choices; The Suffering ensures that said choices will follow you up until the very end.

The Suffering: Ties That Bind 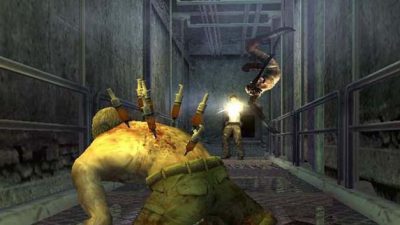 Thinking that the initial game would be the start of a new franchise and encouraged by selling 1.5 million copies, Midway and Surreal Software would produce a follow-up just a year later – The Suffering: Ties That Bind – and again released it on PS2, Xbox, and PC. Expanding upon the morality system of the first game, the sequel includes not just three endings but also three different openings, the selection of which is based on whether there’s a save file from the first game on the memory card. In a nice enhancement, the carried-over insanity meter now changes color and offers different attacks based on how kind, cruel, or indifferent you play the game. There are also instances where characters will generally act differently based upon your decisions (nobody likes a dick, just sayin’).

Torque returns as the protagonist, bringing his beast-infused brand of carnage to the streets of Baltimore while hunting down gang ringleader Blackmore (voiced by Michael Clarke Duncan, The Green Mile), who may or may not have had a hand in the some of the more pivotal moments of the first game, all dependent upon the player’s choices. The storyline this time around is much deeper than that of the first game; twists and turns abound, provide more replay value than even some games of today. Three openings and three endings make for a lot of branching narratives, and each one is worth exploring.

Abbot State Pen from the first game was a pretty dismal place, but so are the streets of Baltimore, at least in the way they’re presented in Ties That Bind. The action plays out throughout the mean streets of Northeastern Maryland, although the locations are not modeled after real-life locations. The enemies are once again influenced by the unsavory and wretched, with pimps, drug dealers, and slave traders filling the roster of the collective baddies known as “Malefactors”. 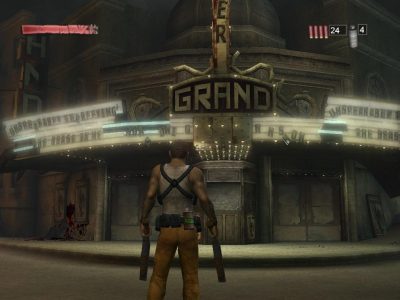 The Suffering: Ties That Bind built upon the bedrock of the first game. It took everything right and made it better. Again, reviews were very favorable. For all intents and purposes, it should have outperformed its predecessor, but unfortunately did not. Perhaps it could have been the proximity of the release date; Ties That Bind streeted 18 months after the original game. Or maybe players took it at face value of presenting more of the same, without bothering to dig into the deeper, more complex story.

For whatever reason, The Suffering: Ties That Bind didn’t meet sales expectations, and hopes for a third outing with Torque and his inner demons would never come to fruition.

The Suffering series came along at a time when the horror gaming arena needed a shakeup. Survival horror was great as a niche, but gaming is a business, after all. More players mean more money for the publishers, and mash-ups of horror and action can reach further into the wallets of gamers than either genre on its own. RE 4 may have capitalized on the concept, but you can’t ignore that Torque’s hybrid through hell began nearly a year before Leon’s did.

The source material was ripe for a major motion picture, and reports seemed to support that The Suffering would get the silver screen treatment, but roars turned to whispers once Ties That Bind flopped. Aside from the lack of a full-on trilogy, there were also no remakes or remasters of either title.

The Suffering and The Suffering: Ties That Bind are available for download on PC over at GOG.com, with both setting you back about $20 combined (as of this writing). Physical copies are available at all the usual suspects in terms of auction sites and third-party resellers, and prices are usually fairly reasonable.

Horror fans can be a fussy bunch. We all have our own unique tastes within our circle. Some prefer slashers; others find them ridiculous and overplayed. But sometimes, two or more things come together in a marriage that makes so much damn sense that we wonder why it hadn’t happened before.

It worked for Reese’s. To an extent, it worked for Midway and Surreal with The Suffering. It most assuredly worked for Capcom and RE 4. And, if we could stop pigeonholing things into a “this-or-that” scenario, who knows what else it could work for.