Whew. The second episode of the Creepshow anthology series did not disappoint, and it even outdid my personal expectations. If you were following our coverage of the Creepshow premiere, then you picked up on our analysis of thematic elements that centralized the experience of childhood, reflexively alluding to narrative framing techniques from the original film. The season’s second episode qualifies the show’s propensity for adapting literary horror to examine problems in human experience and perception while expanding the narrative premise of the original films.

While I had anticipated that thematic elements would not persistently centralize children’s perspectives throughout the series, I must conscientiously revoke my previous comments about parental guidance for watching the Creepshow anthology. Thrillingly grisly splatterpunk-derived depictions of violence make this episode not suitable for viewership by even older children. It is a far cry from “a more mature grade of the Goosebumps franchise,” as I initially described the tone of the Creepshow TV series based on my impression of the premiere.

Caution, spoilers ahead. If you haven’t had a chance to watch the second episode of Creepshow, then head on over to Shudder and see it for yourself before digging into this plot explication and analysis. The first story presented in Episode 2, “Bad Wolf Down,” traces the quandaries faced by a troupe of American army soldiers hiding from Nazis in a seemingly abandoned station that is in fact occupied by an unsuspected werewolf. This story, written and directed by comic book creator Rob Schrab, offers a comically light catharsis from foreboding political elements of our own cultural moment.

Episode 2’s second story, “The Finger,” was apparently initially slated to screen as the series’ final story. Written by horror author David J. Schow and directed by Creepshow’s producer Greg Nicotero, “The Finger” destabilizes the viewer’s sense of comfort in passively consuming horrific content. “The Finger” invites you to relish in a sense of complicity, forcing you to question your involvement in the regeneration of atrocities, real or imagined. This disturbingly reflective story raises the question: does The Finger point at you, too?

Rob Schrab’s depiction of American soldiers-turned-werewolves annihilating Nazis in occupied France offers political undertones playfully wrought through Grindhouse-esque violence and villainy. The French woman/werewolf who has locked herself in a jail cell in the station where the American soldiers take refuge represents a citizen body under occupation. After she explains that she cannot die and bemoans the fact that she has killed families and children, she begs the soldiers to help her commit suicide, and they do so by giving her a silver crucifix to swallow.

When the woman bites each of the soldiers at their behest to turn them into indestructible werewolves before giving in to the succor of death, she transmits her impervious potency to them and enables them to demolish the Nazi squadron. This act of empowering remission represents the seemingly futile nature of resistance under Nazi occupation in WWII. The very instance of including werewolves as the featured monster in this story provides an allegorical commentary on the transformative hideousness of the experience of war.

“Bad Wolf Down” also offers a trivializing pastiche of the figure of the WWII-era Nazi soldier. In addition to providing a metaphor for the destructively transformative experience of war, the prefiguration of werewolves in this story provides satisfying retribution of turning Nazi propaganda upside-down. When the vengeful Nazi officer challenges the American soldiers hiding out in the abandoned station, he threatens to strip them of their hides referring to them as dogs.

Nazis frequently employed the psychological tactic of dehumanizing entire populaces by referring to them in animalistic terms. In “Bad Wolf Down, the American soldiers actually become ‘dogs’ that tear the Nazis limb from limb, retrofitting one of the greatest Nazi tools—dehumanizing propaganda—into a literalizing embodiment of that propaganda. 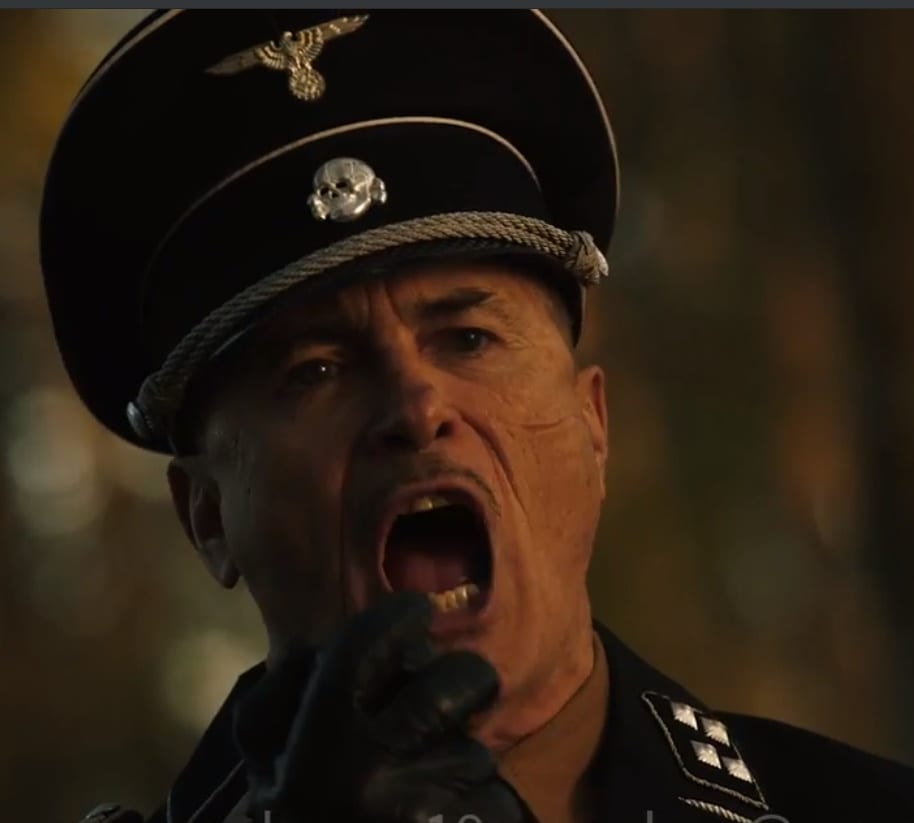 This comically gruesome portrayal of classic WWII-era Nazis getting their comeuppance through a literalization of their own propagandistic tools provides cathartic relief amidst the backdrop of the current political environment. Beneath the chaotic gore and triumphant resuscitation of American victories in WWII, we are poignantly reminded of a certain authoritarian-style president’s tendency to refer to entire groups of subjugated people as animals. In general, today, democratic nations across the world are experiencing a resurgence of far-right radicalism, white supremacist violence, and a widespread romanticizing of Nazism among certain demographics.

“Bad Wolf Down” provides comic relief from the unending backdrop of contending with this unimaginable cultural and sociopolitical hellscape. At the same time, the story obliquely addresses this issue that no one really wants to talk about while taking its own definite stance. We could expect no less of a comic approach to these deeply troublesome issues from Rob Schrab.

Schrab is known for being a co-creator of The Sarah Silverman Program and the director of episodes of Parks and Recreation and Workaholics. As a comedian himself, Schrab is given to satiric portrayals of the darker, grimier side of human affairs. As a comic book creator, Schrab was predisposed to contribute a satiric episode to the Creepshow series.

The first thing that becomes apparent after you get into the thick of “The Finger” is that its main character, Clark Wilson (DJ Qualls), is an unreliable narrator. In particular, he is an unreliable narrator who desperately needs you to rely on him. The episode begins with Clark being frightened after he hears loud noises in his dark, empty home in the middle of the night, and is then astonished after he opens his freezer when investigating the sounds.

Abruptly, we are yanked from the story’s opener and into Clark’s convoluted presentation of the sequence of events in his story—he backtracks and explains to the viewer how he ended up in the predicament of finding something astonishingly creepy in his freezer. In an uncommon narrative framing structure, Clark makes a point to conversationally address the viewer directly throughout his story. Notice that Clark carefully attempts to control his self-presentation to the viewer and to other characters in the story, such as the detectives who investigate him. There is a clear, demarcated difference between Clark’s authentic emotional reactions and his self-presentation.

In general, Clark is a depressive and mopey guy. He lurks in his dark, messy apartment that is littered with beer bottles (often, we see him cracking open a new one) and grumbles about everything: his ex-wife, her kids, his stulted web design career. In truth, he’s pretty lazy. He complains about not being able to work, but later, we catch him turning down a job because it is beneath him. He preoccupies himself by finding and hoarding derelict objects, and that hobby is how he encounters The Finger.

Clark finds a single, corpse-like finger on the ground and brings it home. As he’s inspecting it, he accidentally spills beer on it, which The Finger quickly and inexplicably absorbs. Interested, Clark decides to save The Finger in a Tupperware container and pop it in the fridge. The next morning, The Finger is somehow missing from its container, and Clark finds that the finger has sprouted a thumb. Pretty soon, it is a whole arm, which Clark decides to stick in his freezer. 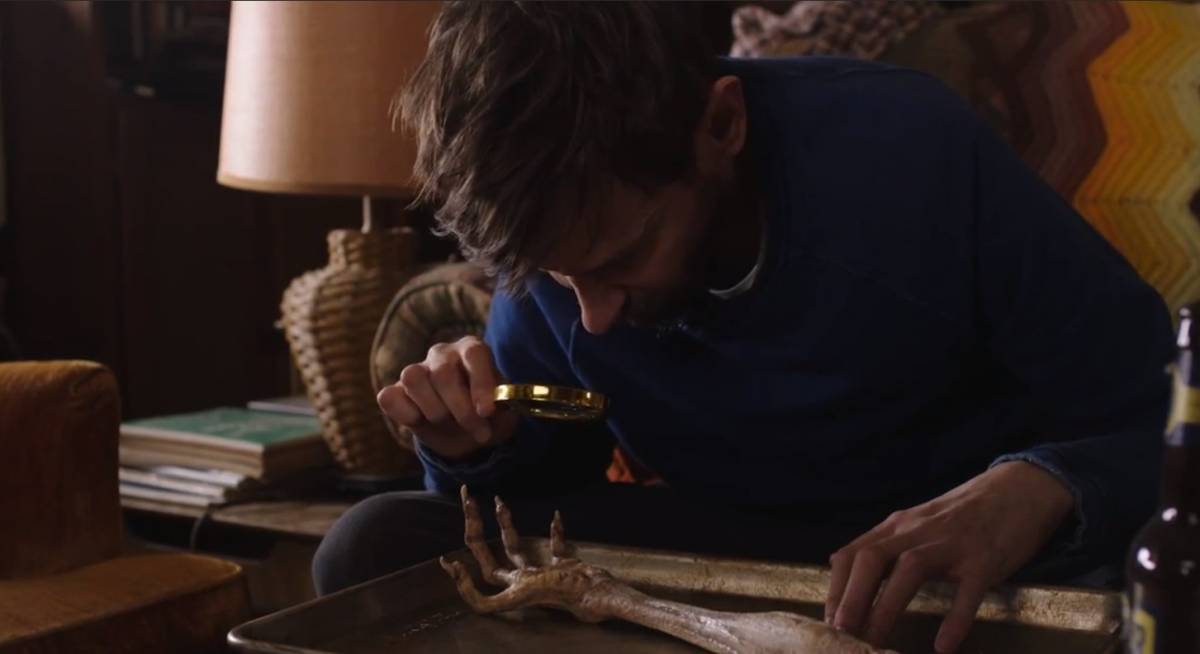 After the arm goes missing, it returns to the freezer as a living, breathing, bloody creature with a spine-like tail. It snoozes in Clark’s freezer—oddly purring like a kitten—and, like a cat, has left a grisly gift in Clark’s garage: a disembodied heart. Later, Clark befriends the creature and names it Bob. Bob is good company, but Clark discovers that Bob won’t let him throw the body parts he brings home away. So, Clark is left with the apparently natural decision to grind up the heart (which turns out to be his ex-wife’s) in the garbage disposal. 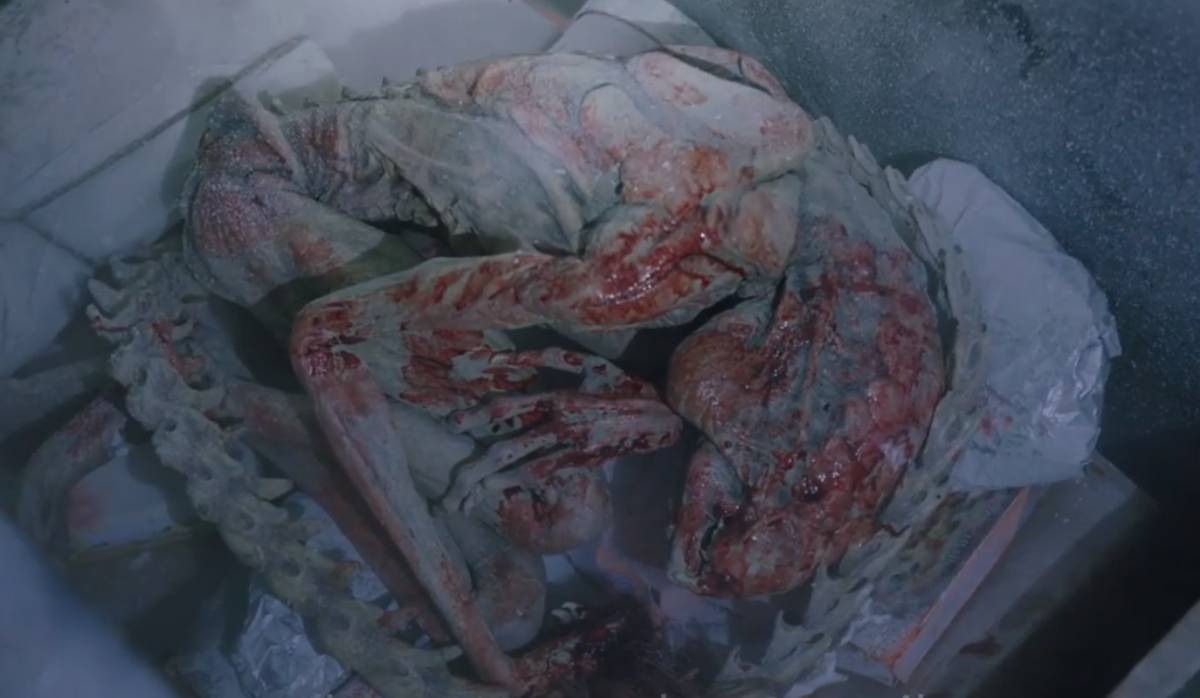 In all, Bob brings Clark the heart of his ex-wife, the balls of a driver who angered Clark, the tongue of a debt collector that enraged Clark, and the heads of his ex-step-children. Clark is at an impasse when Bob presents him with the severed heads, which clearly cannot be ground up in the garbage disposal as-is. The police arrive with a search warrant just as Clark is pulverizing the teenagers’ heads with a hammer, and Clark ends up in a padded cell. From the psych ward, Clark continues to entreat the audience to sympathize with his rage and dissatisfaction, insisting that Bob is real and that Bob loves him.

In the end, Clark’s mania can easily be couched in terms of schizophrenic delusion. Speaking psychoanalytically, Bob in “The Finger” is an embodied outgrowth of Clark’s repressed rage. Consider Bob’s unprompted, grisly killings and Clark’s complicity in cleaning up behind Bob. Why did Bob kill who he killed? He naturally went after the sources of Clark’s seething indignation. When Clark ends up in his padded cell, the viewer is left wondering… was Bob real? Does it matter if Bob was real? No matter how you slice it, Bob and Clark did the killing together, and it was Clark and his careless way with booze that engendered Bob in the first place.

Remember, it was only when Clark brought The Finger into his home and spilled beer on it that Bob came into being. Clark’s implicit alcoholism is thus explicitly linked with the outward expressions of his murderous rage, as personified by Bob. The viewer of Creepshow is starkly reminded of the mutated version of alcoholic Richie Grenadine in “Gray Matter” from Episode 1.

Like with the monster that generated from a mutagen in beer and multiplied exponentially, alcohol is again linked to the mysterious, exponential growth of a murderous monster in “The Finger.” This interconnected thematic element that links alcohol to monstrosity, unnatural growth, and murder underscores Creepshow’s traditional role in providing morality tales that are cloaked in thrilling, over-the-top horror stories.

We have David J. Schow to thank for writing “The Finger.” Schow is a horror novel writer and screenwriter who is widely known for writing The Texas Chainsaw Massacre: The Beginning. Schow himself is credited with coining the term splatterpunk, which refers to a literary horror movement from the 1980s that presents graphic depictions of violence in a countercultural ideological context. This story, in its film adaptation as directed by Greg Nicotero, arises to the splatterpunk ethos, providing an angsty yet unflinchingly gory depiction of a frustrated man’s inner demons being gradually animated by his own Finger.