If asked to name Capcom’s contributions to the horror gaming-verse, most would immediately respond with Resident Evil. A few diehards may invoke Clock Tower, and a handful of misguided souls will probably even toss out Devil May Cry. While all would be reasonable responses (except for DMC), there’s one title that was overlooked upon release, revered ever since, and highly sought after now.

Known as Haunting Ground stateside and Demento in Japan, the game was looked upon as a bit of an anomaly for Capcom. It featured elements of an adult nature and tones of sexuality and perversion that were absent from their mainstream titles, RE or otherwise. It turned traditional combat mechanics on their head and presented a picturesque environment that used well-timed jump scares and eerily ambient music in masterful ways to instill a sense deep, everlasting dread and despair.

2005 was a pretty big year for horror gaming enthusiasts. That’s when the stellar Resident Evil 4 would land ashore on Nintendo’s Gamecube console. It would go on to sell millions of copies across multiple generations of consoles and generally reinvent the franchise as whole. But before RE4 became one of the most critically acclaimed games in history, it began life as a series of different ideas designed to breathe new life into the series.

One of those concepts would be fleshed out as the original Devil May Cry game. Another, often discussed as having been a subplot in what was known as the “Castle” variant of RE4, would see a female main character accompanied by a canine companion. Suggested by series contributor Noboru Sugimura, the idea would be revisited for the creation of Haunting Ground.

In terms of commercial success, Haunting Ground would play second fiddle to RE4, a notion Capcom was perhaps expecting. On name recognition alone Resident Evil would all but guarantee to recoup any financial investment for the studio. Haunting Ground was a new, unproven IP. The company promoted its appearance a year prior to release, but upon it streeting to the masses, copies were not readily abundant. 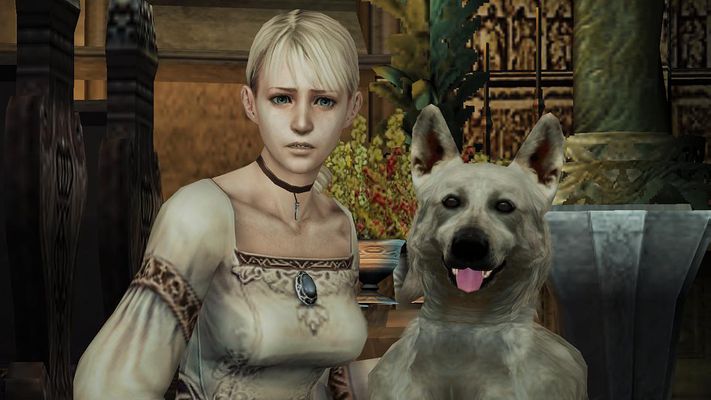 Haunting Ground’s plot revolves around protagonist Fiona Belli and her eventual sidekick Hewie, a german shepherd who serves as Fiona’s major source of offense. Awakening and finding herself stowed away inside of a cage and devoid of any recollection of how she got there, Fiona sets out to fill in the how-and-why of her current situation. Her journey begins in the courtyard of what she discovers to be an enormous castle with gothic trappings. The game’s events continue to unfold against some equally creepy, yet beautifully rendered, locations that oftentimes warrant time spent in silent, unfettered observation.

Unlike typical survival horror titles with enemies lurking around every corner, Fiona’s adventure will only see her encounter a handful of adversaries. Each patrols pre-defined portions of the game and can pop up at a moment’s notice to send her scrambling off in a panic. The first encounter is with man-child Debilitas, a groundskeeper whose affinity for playthings drives his maniacal obsession with Fiona, and sets the tone for things to come. Soon after, Daniella, the maid of the estate, stalks with a stoic, relatively expressionless face. Her intentions become clear as she resents Fiona for being “perfect,” something Daniella herself is not, and culminates in a violent battle to a storyline with psychosexual overtones.

And that’s just the tip of the iceberg in a game that’s full of envelope pushing content, which also weaves in aspects of incest, rape, voyeurism, and sexual objectification, While those elements may be off-putting to some and certainly fodder for controversy, especially within the discussion of a video game, the truth is that they contribute to an ever-building level of anguish that projects on to the player.

A Recipe for Success

Fiona is presented as a beautiful young woman, often clad in the sheerest of attire. She’s the object of desire for the castle’s denizens who are each moved to madness in their efforts to cause her great harm. Aside from her pup Hewie, the base game sees her without any type of weaponry to cause substantial injury to her attackers. There are, however, items that can be acquired through an in-game crafting system that can re-direct enemy focus or cause minimal amounts of damage. Even so, Fiona’s best chance at survival lies with hiding under beds and in the armoires scattered around. Character buffs, debuffs, and restorative items are also available.

Based on the description so far, you’d be right to assume that Haunting Ground has its fair share of puzzles. There are typical fetch quests and find-the-piece-that does-the-thing challenges, among others. Each enemy encounter also concludes with a boss battle of sorts that generally relies heavily upon environmental exploitation. Expect to do a lot backtracking as well, although most sections of the game are self-contained, reducing the tendency for incessant wandering. In a surprising-for-the-time design choice the game is lacking of any loading screens. This helps to ratchet up the tension when being chased by an enemy, who will most certainly pursue you from room to room.

The Brink of Insanity

Fans of survival horror titles have no doubt spent time with 2002’s extraordinary Gamecube exclusive Eternal Darkness: Sanity’s Requiem. That game introduced the concept of a sanity meter that, when depleted, resulted in some pretty crazy fourth wall-breaking effects. Haunting Ground employs a similar device, but keeps the sanity meter hidden from the player. As enemies inflict damage and chase Fiona around, she slowly slips into distress, represented by her stumbling and falling, until she has a full-blown panic attack. Player control becomes unresponsive and view is obscured with a hazy blur effect, leading to movement difficulties that make Fiona susceptible to being caught. Should she find herself in the clutches of her assailants, Fiona will be subjected to a violent death. However, the worse is yet to come as some rather disturbing noises are played over a black screen, suggesting something much more gruesome than murder and is left to individual player interpretation.

The main game encompasses around 8-10 hours of playtime. There are a total of four alternate endings, each influenced by a player’s choices. Different attires for Fiona and Hewie, as well as additional items, game modes, and cutscenes are unlocked upon completion.

Haunting Ground didn’t quite make a splash at the time of its release; the lion’s share of accolade for horror gaming that year went to a very deserving Resident Evil 4. It also didn’t help matters that both titles were released just months apart, with gamers still too embroiled in Leon Kennedy’s troubles to even be on the lookout for a new survival horror title, let alone one without a lineage or track record. Reviews at release were also mixed, possibly cementing Capcom’s decision to not increase production.

Trying to score a copy today can be difficult. The title ever only appeared on the PS2. There was never a proper digital release in North America, although it was made available on the Japanese version of PSN. Second-hand copies can easily trend north of $100 on auction sites and Amazon, sometimes for even just the disc only. Complete in box prices often edge closer to the $200 mark.

As questionable as some of the content it includes is, Haunting Ground is still a worthy candidate for a remake or re-release treatment. Perusing YouTube videos will unearth some of the game’s sinister secrets and may whet the appetite of those interested. But the trepidation that comes from being chased around by a hulking brute in search of a new “dolly” can’t adequately be replicated through anything other than first-hand experience.

And should you find yourself debating whether the prices on the online auction sites are worth the gamble, know that the experience of Haunting Ground is one that will stay with you long after you’ve finished playing it.

For more Horror Gaming Essentials, check out the following: