I have always been a fan of games based on decision-making. Bioware’s Mass Effect and Dragon Age series have been a staple to me for years now. I am thoroughly in love with Telltales’ The Walking Dead series and The Wolf Among Us, Quantic Dream’s Heavy Rain, and of course, Supermassive Games’ Until Dawn.

When they announced Man of Medan… to say I was excited was to put it mildly. Although I was a little wary at the smaller price tag. Is it nicer to my wallet? Absolutely. But, ultimately that tells me that the game is going to be shorter and therefore I’ll get less hours out of it. (Or there’s always the unfortunate potential and possibility of there being a ton of DLC to be added onto a less completed game.)

“O’Death” as an introduction to Supermassive Games seems to be a staple that I’m not mad about. It’s a haunting melody and sets the stage for the games, which tend to be darker in nature, as they’re based on decisions that result in life or death results. I’m also a fan of seeing a psychiatrist type figure appearing in the beginning. I don’t know why but I like the idea of having an NPC break down (or usually heavily criticize) my decisions or sometimes lack thereof—sometimes the best choice is silence.

My initial playthrough—which isn’t completed yet—is with my husband because when given the opportunity to have a co-op mode, we always take it. But, I will have to say, I don’t know how much I love it with this style of game. I preferred playing co-op in Beyond: Two Souls as the characters were so different from one another and it felt like it made more sense to have two separate roles if desired.

The issue I have with Man of Medan is that it doesn’t feel like it needs or even should be a co-op game. Is it cute and fun to have it? Sure. But it’s not like A Way Out which felt designed for two players and where there are clear cut distinct roles. The co-op in Man of Medan isn’t as utilized and feels more like an afterthought. I would’ve liked to see more from it but I also can’t get mad at it.

Having a Movie Night mode does make for an easy way to potentially get a non-gamer friend, significant other, child, or whoever to play and spend some quality time with you. Or on the flip side, play with someone who you know is either going to take the game as seriously as you or completely troll you.

As for the game itself, it’s gorgeous. Supermassive Games always manages to impress me and this game is no different. I absolutely adore what I’ve seen of the story-line so far—I am a sucker for anything war related—and the characters work well together. Even Conrad who I wasn’t sure if I was going to like, quickly grew on me. 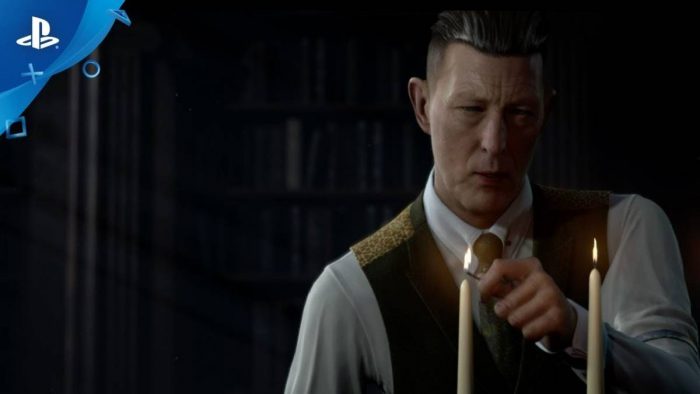 The mechanics are the same clunky and awkward style that we all know from Until Dawn. They’re slightly annoying but it hasn’t been anything worth getting frustrated about. What has been frustrating though is the fact that I’m only a few hours in and I’ve already had my PS4 spit out an error message, blue screen and all.

I’m not sure what’s to blame in this situation but it is more than annoying to replay a scenario when you were quite happy with the outcome. It’s one thing to reload it purposely because you killed someone by missing a quick action (god dammit Conrad) versus having your PlayStation betray you.

Ignoring that issue, the game plays well and I’ve been enjoying myself so far. Traits from Until Dawn make reappearances such as totems but they instead take on the form of pictures framed in various places. You’re able to check character relationships, secrets, character’s traits, and everything and anything that you could possibly analyze. Or in my case, over analyze. Listen, I just want them all to live happy healthy lives on the first playthrough okay? Platinuming the game can come later.

Even though I feel like Man of Medan might not hold the same weight for me as Until Dawn purely based on playtime alone, I still have a feeling it’s going to be good and I’m not going to regret picking it up on day one.

The storyline could potentially have the issue of being less fleshed out due to being a shorter game but I’ve got high hopes. So far, I am loving the story and character development and though some parts are a little cliché—getting your boat jacked and the ghost story part was a little eh—I can’t wait to see where the plot goes. My husband and I already have theories between us and we’re curious to see what Supermassive Games is going to throw at our character’s moral compasses.