Noted philosopher Thanos (son of A’Lars), in what was (probably) a commentary on noted filmmaker Alan Smithee’s name appearing on the opening credits of a Hollywood film to an unsuspecting public, said: “Dread it. Run from it. Destiny arrives all the same”. So when you see the name Smithee, the infamous filmmaker of multiple genres and decades, with over 100 film and television credits, there is no escaping what you’ve gotten yourself into. There will be pain and there will be sacrifice (mostly of time), but no matter how hard you fight it, as wise Thanos said, destiny will arrive: You will be watching some horrific shit.

That’s not to say all of Alan Smithee’s films are without value, good intentions or even moments of brilliance. Hellraiser Bloodline, for example, the fourth film in Clive Barker’s saga of S&M demons (or angels, depending on what you dig) pleasuring the living hell out of seekers of that next level of sexual adventure, had so much going for it on paper, that it seemed like a subversive, transcendent continuation of a once unique horror idea grasping desperately to its existence as anything but a cheapo franchise its third film, Hellraiser III: Hell on Earth (which I kind of like, but whatever) was leading it towards.

So what if it was Pinhead…in spaaaaaaaace?! The final frontier was going to be explored with new depths of imagination and madness that other franchise entries, both past and present, like Leprachaun, Critters, and Friday the 13th would use simply as a gimmick. But it turned out the true monsters were those running Dimension Films and what started out as a unique idea ended up becoming a slasher film (something Pinhead is not) partially in space, sometimes in France, and always in shades of blue.

Quick tangent: do you remember the Disney remake of Beauty and the Beast from a few years back? I don’t either. Well, except for the first five minutes of the film, in which it became one of the scariest damn things I’ve ever seen.

If someone were to use the aesthetic of those first five minutes, in which we see the human prince, acting like a foppish dick in his elaborate makeup and powdered wig, cursed into becoming a monstrous Beast, and actually made it a full-length horror film, I’d be shitting myself to this day. Powdered wigs, poofy shirts, and white make-up on a bad guy give me the willies.

And Hellraiser: Bloodline, even in its truncated state (more on that later), delivers some legitimate chills in the opening portions of its main story (bookended by scenes on a space station) by doing what Beauty and the Beast (obviously) did not do: showing some 18th-century black magic shenanigans with dickish, powdered-wigged fops!

To be honest, if the film had just focused on this aspect of the tale, a prequel of sorts that went into where Pinhead came from and, the most important question of all, why he exists, Hellraiser: Bloodline might be considered a horror classic or, at the very least, a cult one. And for all intents and purposes, original director Kevin Yagher, in what would have been his feature film directorial debut, actually intended to make the majority of the movie in this vane. 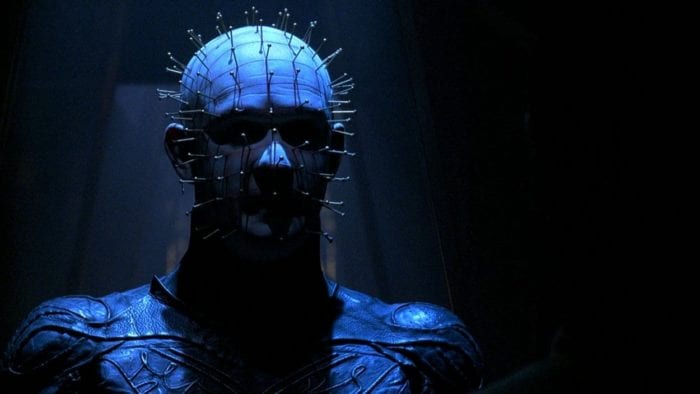 “Aha ha, oh, you suffer beautifully. But I am here for business, not pleasure.”

The true horror story of Hellraiser: Bloodline is the mess Dimension Films caused in putting it together. Dimension, formed in 1992, started out mostly as a distributor under its parent company Miramax (co-run by real-life Cenobite Harvey Weinstein). It eventually became both the production studio and distributor of its own content. While still owned by Miramax, it became creatively independent from them.

Halloween: The Curse of Michael Myers (1995), co-produced by Miramax but distributed by Dimension, is infamous in the horror community for its troubled production, multiple cuts, and virtually nonsensical storytelling. Like Bloodline, on paper, Curse seemed to try to push new ground by somehow adding Druid rituals and cosmic magic to the essence of Michael Myers. It is aggressively stupid.

Naturally, Curse was heavily edited (Miramax, already known at that point for being handsy in the editing room, took over the entire production) and multiple versions now exist. Somewhere, there is one version of Curse that, when mixed perfectly, likely by chance, actually makes sense. Maybe. (Notably, the director of that film was Joe Chappelle who, as it would turn out, would become one of the directors of Bloodline when Yagher walked out).

Just like Curse, Bloodline was severed and cut up worse than a Michael Myers victim. Just the range of cuts and changes alone warrants pages of reading on the internet. Kevin Yagher, a makeup effects guru, was so displeased with how the film was cut that he decided to take his name off the film completely and abandoned the production, leaving the film unfinished. Unsatisfied with Yagher’s direction anyway (and a lack of the appearance of Hellraiser mascot Pinhead showing up early enough), Joe Chappelle, who was a grizzled vet of Miramax/Dimension by this time, came on board, shot entirely new footage and editors tried to mash it up with what already existed.

Yagher was, and remains, very disenchanted with what happened during the making of the film. He rarely, if ever, talks about the experience, offering what appears to be a once in a lifetime discussion of his contributions to the film to the Clive Barker Podcast in May of 2018. In the interview, Yagher revealed that the studio presented three of their own cuts of the film to him in an effort to avoid using the Alan Smithee title, and cut out 30% of the original content each time, virtually making anything Yagher shot irrelevant. Yagher was also discouraged from using “chains or hooks” and had to lower the level of blood. You know, the things that make up 95% of a Hellraiser movie!

Oddly enough, when Joe Chapelle entered the fray, he added more blood, a lot more chains and hooks, and a number of sex scenes. Cut out or replaced was the more detailed backstory of the puzzle box’s creator, Phillip L’Merchant, and the haunting 18th-century French setting that, oddly enough, proves to be the film’s most coherent, artistic, and frightening portion.

With at least four total cuts existing (one which featured a large amount of the French scenes, which were still used anyway in the trailers as well as the main poster (see below)), varying in time from 82 minutes to 112 minutes, the fact that Hellraiser: Bloodline was released at all is a miracle. Since Joe Chapelle did not direct enough of the film to receive co- or full credit, and since Yagher washed his hands of the whole thing, Dimension had no choice but to release the film as if it were directed by Alan Smithee, the go-to name directors use when they disown a project and a guaranteed sign to consumers that the film is a mess. Hellraiser: Bloodline’s fate was sealed.

And the critics were not nice. Variety supported Yagher by saying he “wisely realized the released film would not enhance his resume”. Stephen Holden of the New York Times credited the story from being literally told successfully but said the script was “otherwise incoherent and (except for Mr. Bradley’s Pinhead) wretchedly acted.” He bid farewell to Pinhead and the Cenobites as well, advising his readers that “they won’t be missed”. Marc Savlov of the Austin Chronicle dictated that the film’s true mystery was “how in the hell this laughably bad sequel ever earned a theatrical release” in what he dubbed an “ever-deteriorating…series”.

But is it truly that bad? Well…yeah…but sometimes something so historically awful is fun to watch. I gave the damn thing four out of five stars on Letterbox’d for goodness sakes. Because, despite the fact that it makes little to no sense (but frankly, none of these Hellraiser movies do. I have never watched a franchise more times than I have the Hellraiser franchise and I never remember anything about them in terms of mythology and/or the climax…and I adore them) and despite the fact that I always throw my arms up at any given scene and go “wait, what?”, I still the think the film is stubbornly ambitious enough and strangely genius in its butchered editing and directing process that it is my favorite.

I haven’t even told any of you what the film’s main plot is because, well, not even the filmmakers could do that. But think about it for a minute: how many films can you rent for $3.99 on Amazon that have creepy French dudes summoning demons, strangely attractive women who look better with their skulls exposed (I’m weird, sue me), twin actors being fused together into one person, a dog stitched together with bondage and nails, a space station that turns into a puzzle box, a self-destructing robot controlled by the Manipulator Arms from Mystery Science Theater 3000: The Movie, the feature film debut of Adam Scott, a philosophical discussion on what is better: torture or seduction, and such life-affirming personal revelations like “I am exquisitely empty” and “do I look like someone who cares what god thinks!”?

Go watch it. Alan Smithee directed it. Destiny arrives all the same.