David Cronenberg’s eXistenZ was released in 1999, 16 years after the release of Videodrome (1983). The two films have been paired in a number of ways. Some refer to eXistenZ as a ‘half-remake half-sequel,’ while some refer to it as a ‘spiritual sequel.’ Some of course, view the two films as two completely separate pictures.

I myself am a follower of the theory that the two films exist within the same universe, the same timeline, only eXistenZ came at a later point. It was a development of the story that came from Videodrome. To make sense of this theory I wanted to explore eXistenZ in relation to Videodrome, and really get to know the similarities.

Transformation in eXistenZ and Videodrome

Both films begin with a topic that could easily continue on to become any normal film, but this is David Cronenberg we’re looking at, so of course, they don’t. Instead, both transform into a world where reality is questionable and you’re never quite sure what’s real or what’s being imagined. Videodrome begins as a story of a man, Max Renn (James Woods), who wants to find an exciting show for his television channel. And eXistenZ begins as the story of a group of gamers wanting to test a new game out with the creator of the game itself. Both are totally normal stories up until a certain point that changes them. 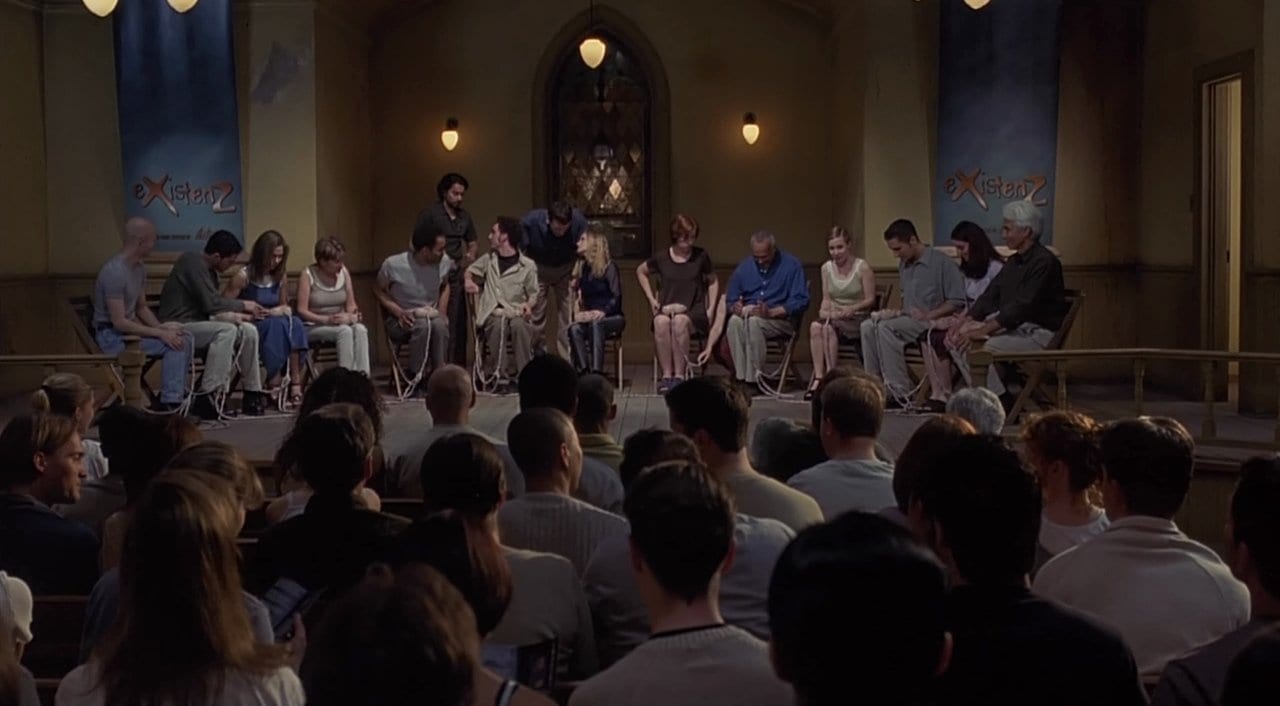 The Theme of Flesh and Penetration

When we consider the transformation of the films, the introduction of the transformation seems in both cases to be centered around flesh, penetration, and some form of portal in the body. This could simply be a result of Cronenberg’s obsession with flesh and the theme of body horror. It also insinuates that the signal found in the Videodrome VHS can be entered through the body, as Max Renn inserts a videotape into the gaping entrance in his own stomach. This process could have been developed over time. The hallucinogen effect of Videodrome could have somehow become measurable in the future, kept within a pod, and those with bio-ports in their lower backs can choose to enter that state of mind through their ports. When you consider this, it becomes more apparent, because the game of eXistenZ couldn’t possibly create imagery, could it? There is no technology attached, game creator Allegra Geller (Jennifer Jason Leigh) describes this phenomenon as your own mind being able to control the game. She means that there is no electricity or technology involved in the process at all. It is incredibly similar to a hallucination, or maybe it simply is a hallucination. 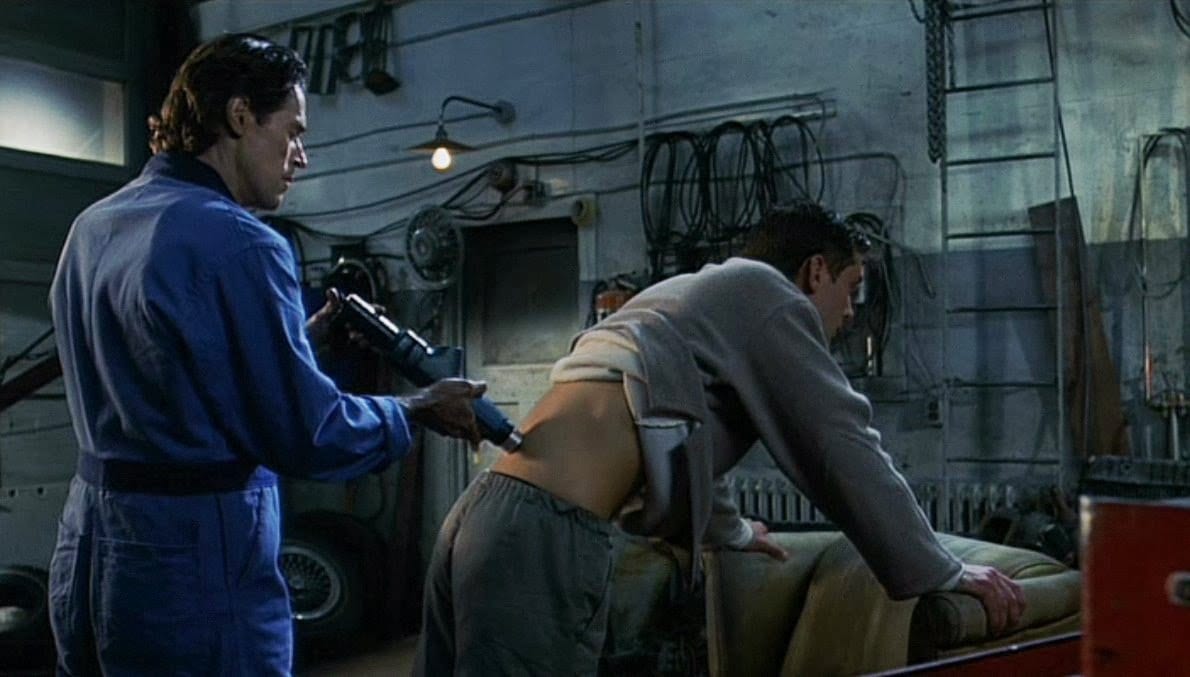 In each movie, we hear the phrase death to in very important scenes.  Max Renn ends his own life at the end of Videodrome and announces Death to Videodrome. Long live the New Flesh.” This line returns more than once throughout eXistenZ. It first appears after the group originally enters the game, and later when a man who arrived late to the event pulls a gun out of his bag, aims at Allegra and shouts “Death to eXistenZ! Death to Antenna Research! Death to the demoness Allegra Geller.”

We hear the line multiple times throughout the rest of the film. “Death to the demon Ted Pikul,” “death to realism,” and  “death to the demon Yevgeny Nourish! Death to PilgrImage! Death to transCendenZ” in the very final scene. Every example, including ‘death to Videodrome’ share a strong anti-game connection, meaning that all share an underlying goal of the destruction of this technology. This pairs well with the fact that both Max Renn and the man who tried to assassinate Allegra Geller use this line in an attempt to be some kind of saviour. Someone who seems to believe that this technology that transforms you needs to be demolished for the sake of humanity. 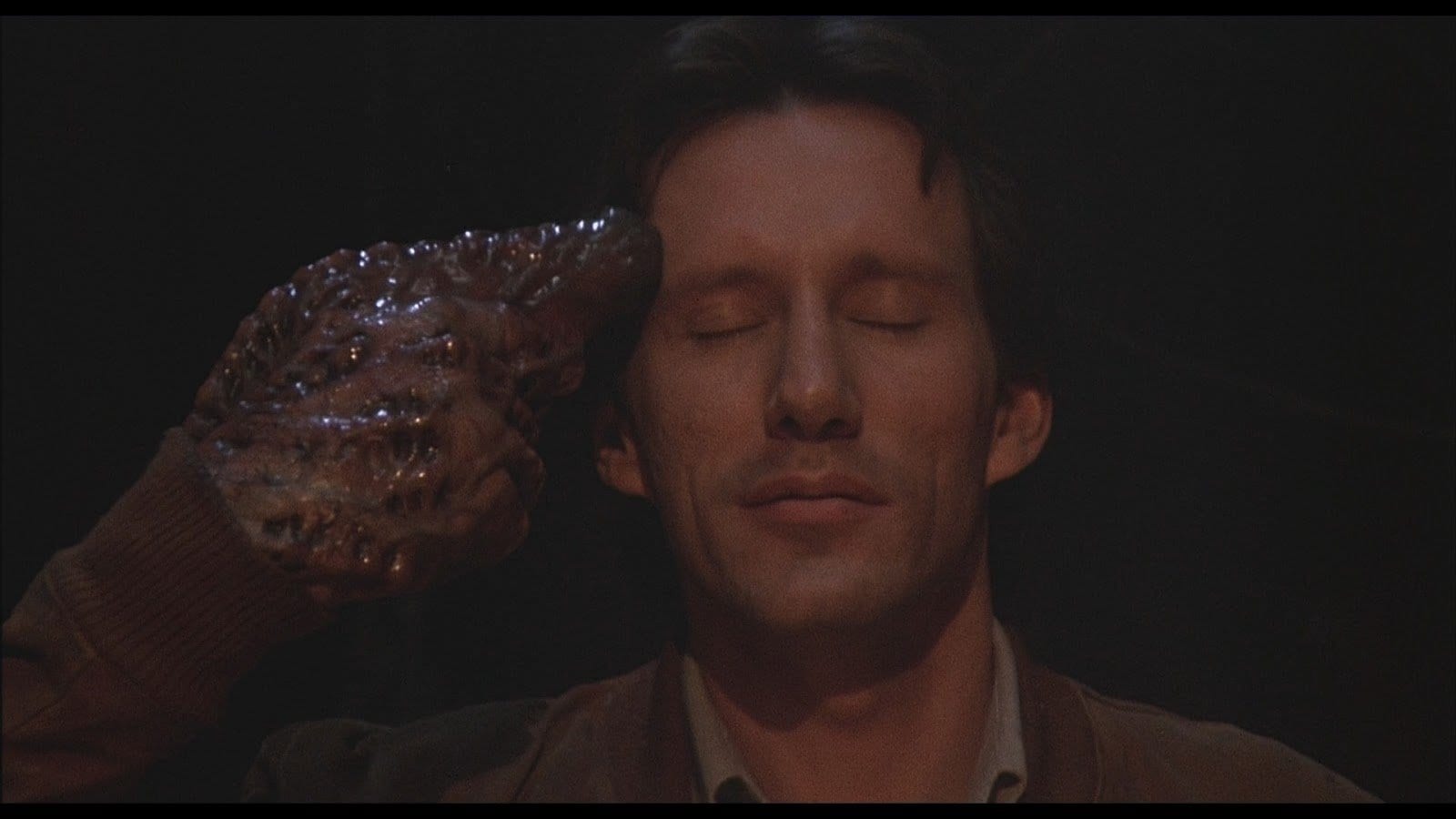 Weapons found in both eXistenZ and Videodrome

These two scenes share yet another common factor being the weapon they use. Both guns appear to be formed organically. The gun from Videodrome formed when a gun held by Max fused together with his hand, whereas in eXistenZ, the gun is created from the bones of animals. Its ammunition is teeth as well, rather than actual bullets. Both of these guns are not actually real; the first forming during Max’s hallucination and the second being an object seen while the characters are within the game. Both guns from each movie look very similar because they both appear to be molded from flesh and bone. If Max Renn’s hallucinations were recorded as it was suggested, such a weapon could have been manufactured and used within the development of the technology in the game of eXistenZ. 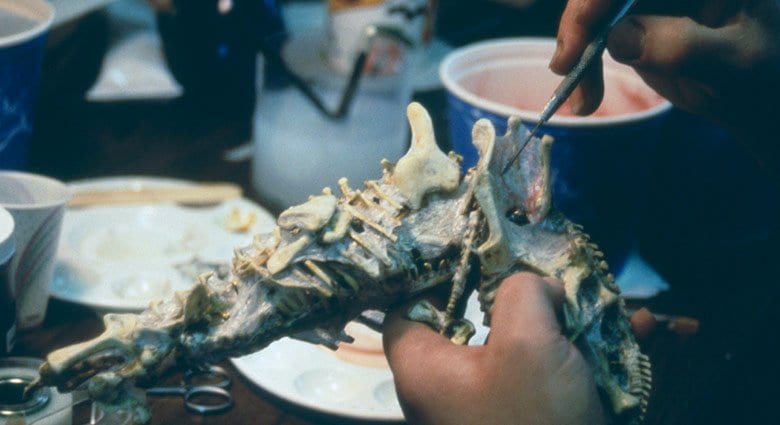 Something that came to mind while watching eXistenZ is the almost sexual way that porting into the game is treated. It reminded me of Nikki Brand (Debbie Harry) in Videodrome and her arousal by the videotape. Both the video and the game have a sexual atmosphere surrounding them when it comes to the women involved. In fact, both Ted Pikul (Jude Law) and Max Renn are seduced into these worlds through women. Nikki appears on the tape that Max first watches and convinces him to submerge himself in the world that is Videodrome (and submerge himself in his television set, at that exact moment). Ted Pikul doesn’t even possess a bioport but ends up getting one at a country gas station of all places. All for the sexy blonde gamer who wants him to play her game. 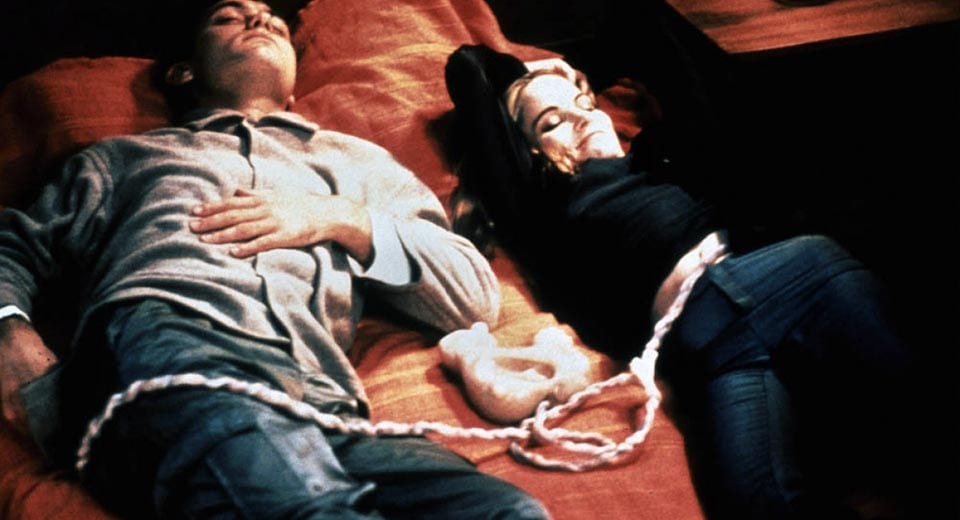 The pattern of deaths in each film also features similarities. When Max Renn is under the influence of the Videodrome corporation, he is ordered to kill his business partners. Of course, he wouldn’t have killed the people he works with as himself.  He is tricked by the signal controlling his mind, and Ted Pikul’s character is tricked by a game player into killing his contactee within the game (the Chinese waiter at the restaurant). Both are deaths of people who were generally innocent, but trickery and deceit shown from within the other worlds caused the main characters to end these people’s lives.

Major deaths appear at the end of both films too. With Videodrome, the main character Max Renn is convinced to commit suicide by a hallucination of Nikki. In eXistenZ,  inside the actual game, main character Ted Pikul is shot and killed by Allegra (both again being deaths of the main male characters under the influence of the female leads.)

Are We Still in the Game?

After the group appears to have woken from the game, the audience is met with the ultimate surprise that the beginning of the film was also part of the game.  Only the game is actually called transCendenZ, by the company PilgrImage. The game creator here is a man named Yevgeny Nourish. The main characters Ted and Allegra are suddenly only a part of the group of game testers, and they are the members who came to assassinate the game creator.

Following the line ‘death to transCendenZ’ they murder Yevgeny Nourish, and attempt to escape, only to be met by the man who they earlier assassinated as the Chinese Waiter, who asks them “Hey, tell me the truth…are we still in the game?” 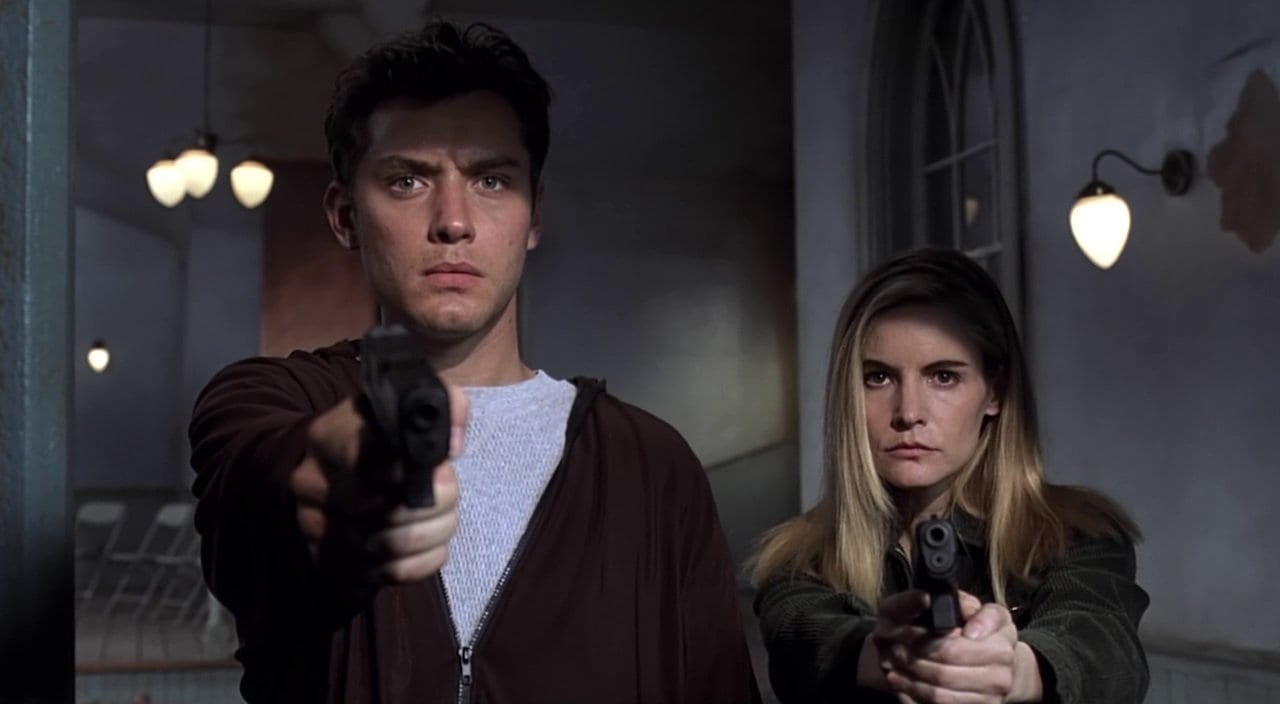 The film ends with this cliffhanger. My thoughts are that at this point, yes, they are still in the game. Judging slightly by their actions, as characters in the game do, Allegra and Ted both seem to pause for a second or so before their lines or their movements. This is exactly how players of eXistenZ appear within the game when using the scripts manufactured for them. There aren’t physical scripts and the player is waiting for their body to take control and do what needs to be done for them so that the game continues. This is made very clear to us when Allegra earlier in the film is explaining how the game works to Ted. Perhaps this is made clear to us for this exact reason and leads me to believe that they are still in the game at the end of the movie. However, I’m not clear on whether the beginning of the movie was in fact real life after all, or if the entire film existed within the game.

Both eXistenZ and Videodrome, in keeping with their general themes of ‘what is real?’ end leaving the answer to that question completely open. Did Max Renn commit suicide, or was it another level of hallucination? Are Allegra Geller and Ted Pikul actually those who are against the game, or are they in fact still inside the game? The films end in a very similar manner, and with the same question to be answered.