The last three episodes of DC’s Swamp Thing have steamrolled their way through to the bitter, initially unanticipated end. Episode 8 (“Long Walk Home”), Episode 9 (“The Anatomy Lesson”), and Episode 10 (“Loose Ends”) first walked and then, in the finale, sprinted to the finish line. As unfortunate as that is, and putting aside the effect that its shortened form had on the story lines, these three cumulate in a marathon of “last-ditch efforts” by many characters to achieve their goals—some to their success and others, not so much.

“Long Walk Home” sees Abby Arcane (Crystal Reed) facing the fact that her journey began and now ends in the same place—the swamps of Marais. Nothing is left for her at the CDC, not when her efforts and interests aren’t supported there, especially considering the new boss and interference from the Conclave under Nathan Ellery (Michael Beach, Aquaman).

This is also the last appearance of Abby’s friend and fellow doctor, Harlan Edwards (Leonardo Nam). As the last pieces of Abby’s old life fall away, it’s clear that she’s left with one direction in which to head: home. Whether this happened here because of a sped-up timeline or a natural choice is hard to tell, but, at this point, it doesn’t yet feel rushed.

Avery (Will Patton), too, makes this journey after being left to die in the swamp, only to meet—and subsequently charm—Swamp Thing in the previous episode. Upon his return, he finds his life more than a little uprooted, considering that Maria (Virginia Madsen) is back, doing business with the Conclave.

As an episode that did little more than steer the ship in the right direction for all parties to find their places on the stage just in time for the final act, it still managed to deliver in general terms the fare that is by now anticipated with any episode of Swamp Thing: bad science (let’s face it, that’s a given in comics, and easily ignored at this point) and interpersonal drama.

Of all the episodes, save perhaps the first two, it is “The Anatomy Lesson” that truly delivers on all promised fronts and provides the needed push to help slip Alec Holland’s character development over the edge into the full-fledged “Swamp Thing.” Gore and body horror abound in this fantastically gruesome installment, though it’s not limited to the titular character. 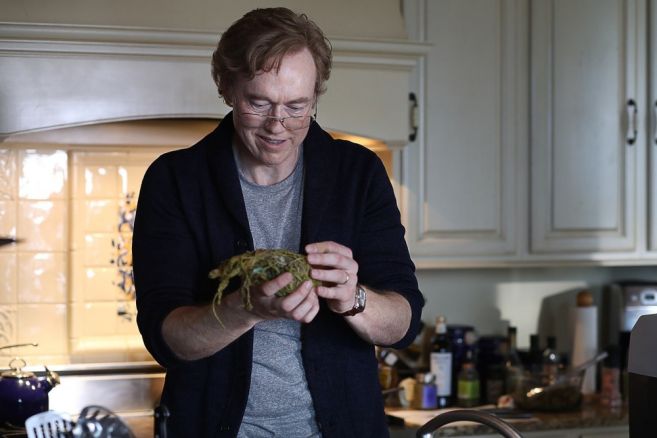 A similar arc finds Dan Cassidy, aka the Blue Demon, who finally, with a little more effort on the Phantom Stranger’s part, embraces his destiny in a bloodsport spectacular sequence, helping to save Liz and Abby so they can free Swamp Thing from Dr. Woodrue’s (Kevin Durand) live dissection, which reveals a haunting truth about Holland’s reality—there’s no actual “Alec Holland” to be found within him. A visual spectacle, the autopsy-like organ harvesting scene is ironically also the most difficult moment to watch of any episode, including the finale.

The resulting “Beauty and the Beast” scene, complete with the famous line “You came for me,” draws Arcane and Holland (or not-Holland) even closer to where they have been heading from the moment they met. It was a beautiful and necessary sequence to push the conflict within Swamp Thing as he comes to realize simultaneously how little he is similar to what he “used” to be, and yet, how little he really wants to leave his one connection to humanity—Abby—behind.

Later, in the cove, Swamp Thing dredges Holland’s body from the swamp, making for another powerful moment between the three.

Since these scenes are, for one, anticipated by most familiar with the story, as excellently executed as they were, and as true to several runs of the comics (Swamp Thing Vol. 2, #28, for example), there’s relatively little disappointment to be found in the fact that the show didn’t run with the concept that Swamp Thing was built around Holland’s body, even if it doesn’t incorporate any genuinely human body parts. There’s just something about that scene from Justice League Dark when Holland’s skeleton is pulled from within Swamp Thing’s form that’s just wickedly cool.

Regardless, the direction taken helps to establish his newness and allows Swamp Thing to put his desire to return to being human behind him, and instead take up his role as the Avatar of the Green, as he has always meant to.

In turn, this leaves Abby reeling, without direction, as her goal throughout the show—and indeed, her life—is to fix things.

For others, just as Alec’s life has ended, so to are others ending, at least in a metaphorical sense. Matty is distraught over his actions and revelations, driving him to drink heavily. Lucilia is completely giving up the last shreds of her affair and Maria is taken away to a mental institution so Avery can get back at her for trying to usurp him. Caroline takes all of her pills, her Alzheimer’s taking advantage of the fact that Woodrue left her alone, inducing locked in syndrome. These story lines, while interesting throughout, all start to feel secondary in light of the impending series-end. Regardless, the care that went into tying off each one accordingly is more than evident, and does a great service to the show in its rush to figure things out without the benefit of a few more episodes to do it in.

The finale, however, stands out above all. Any worries that plot lines would be dropped are dispersed. Everyone gets a send-off, and every story line has an end here, though some are better executed than others. Maria’s wrap-up, in particular—being left a daydreaming husk by Madame Xanadu—felt haphazard and undeserving for the character, and though it could have gone another way, perhaps this is the simplest considering the limited space with which to work.

Avery’s plot line follows suit for his character; having nowhere else to turn, he turns to drink, and from drink back to where the dog always goes—sniffing around his stomping ground. Lucilia of course wants nothing to do with him after the trouble he’s caused Matty. Too little too late, however, as she finds her final end by Avery’s knife, and then, eventually, in the bottom of the swamp, locked in her car.

Though affection for either of these characters is weak at best, it is interesting that both of the women in Avery’s lives are so thoroughly and completely destroyed at the end of the series. Although, not without a cliffhanger that perhaps speaks to Avery having finally gotten the comeuppance he deserved, choking up a pod of swamp vegetation, though to what end, remains unseen.

The other plot that gets a significant amount of attention is that of Woodrue’s. Floronic Man senses begin to tingle when Woodrue tests his “cure” for Alzheimer’s on himself before attempting it on his wife, giving him, at first glance, control over wood, unnatural strength and a heaping dose of irrationality. Many fans were awaiting this transformation with bated breath, and those who stuck around for the post-credits scene should not have been disappointed. Kudos to the incredible practical effects team in the making of a secondary suit. This show would not have been the same without their attention to detail and utter dedication to the believability of their craft.

In one final addition, Dan Cassidy finally makes it out of Marais, after a touching goodbye with Liz, effectively wrapping up most of the loose ends promised in “Loose Ends.”

Bookending these segments of story, however, is the real heart of the show: what does it mean that Swamp Thing isn’t actually Alec Holland? Can memories “make the man”? Swampy wrestles with this philosophical question for most of the episode, in between beating up Conclave men, of course. Though Alec Holland is not physically a part of the body that is Swamp Thing, it is Abby who argues that Alec Holland was never just the decomposed skeleton of a man, or the walking talking charmer that she briefly knew. Perhaps Swamp Thing is the metaphysical remnants of that soul, perhaps only an echo.

Ultimately, the show—and Alec Holland himself (Andy Bean)—reminds Swampy and viewers alike that it doesn’t really matter. Alec’s presence is there, and Swamp Thing now exists and those two pieces must be reconciled in some way for both of them to find any peace. This scene, of all the scenes in the episode, was the one that everything has been leading up to, and felt naturally incorporated into the story.

For a show with a lot of plot lines and a lot going on, there was definitely room to drop the ball on this important factor, this existential crisis that has always been at the heart of Swamp Thing. Finally, Abby returns to the place it all began, Alec’s lab in the swamp. True to form, he’s there and they share a touching heart to heart, culminating in an agreement to be partners of a sort.

It’s here that there’s maybe a measure of disappointment for fans hoping that Abby and Swampy would act on the undeniable attraction they’ve had for one another from the beginning. Even though there is nothing more than a companionable, tender moment, it still rings true that the care that these two have for one another and for the swamp is the heart of the show, and the heart of Swamp Thing. If nothing else stands, it’s that in one season, DC managed to tell an excellent adaptation of an origin story without losing its focus along the way.

Despite all this, it seem that nothing can really save the swamp. Cancellation remains assured at this point, though the exceedingly positive consensus hasn’t wavered. As a whole, Swamp Thing delivered, but it was never given a chance to fully blossom into the vision to which it aspired. A blend of genres, horror, suspense, procedural and drama, Swamp Thing is many things, the least of which, is over. Swampy lives on, hopefully, in more ways than one.

If you haven’t read the comics, go to the library or your local shop and pick one up. Or, if you can’t do that, go plant a tree. You know he’d want you to.

For the fans: Phantom Stranger’s silver coins were finally visible on screen. If this is all the Justice League Dark DC ever puts together for a live action show, at least they gave viewers that much.

Miss any of our Swamp Thing coverage? Re-live the experience now:

Swamp Thing Gets Surreal and Spooky in “Drive All Night”

Swamp Thing Continues to Surprise and Scare in New Episode

Swamp Thing’s “He Speaks” Delivers the Series’ Best Episode Yet