If dreams are the stuff of imagination, then what are nightmares? Are they merely painful reminders of our fears or something more? For its run, the Nightmare on Elm Street series has explored the juiciest parts of the subconscious. The terrors of the real world interspersed with the fantasies of desires unrealized and problems unresolved make this realm a perfect place to tell the stories of survivors, victims, and the infamous killer that lurks there.

The Origins Of A Nightmare

Sleep is one of those inescapable parts of life. As much as we want to stay up and keep pressing forward, the body is still an organic machine; it relies on sleep for recuperation and rest—otherwise death would be imminent.

Wes Craven (Scream, Last House on the Left) was well aware of the potential that came with this no-win situation. As the story goes, he came across the anecdotes that would form A Nightmare on Elm Street (1984) in newspaper clippings; these true stories chronicled a selected group of people suffering from lack of sleep due to fear of nightmares. Ultimately, the unfortunate souls would end up dying. The thought of that alone is a scary proposition; to think that something all human beings can’t run from is the very spot for our destruction leaves anyone with chills. 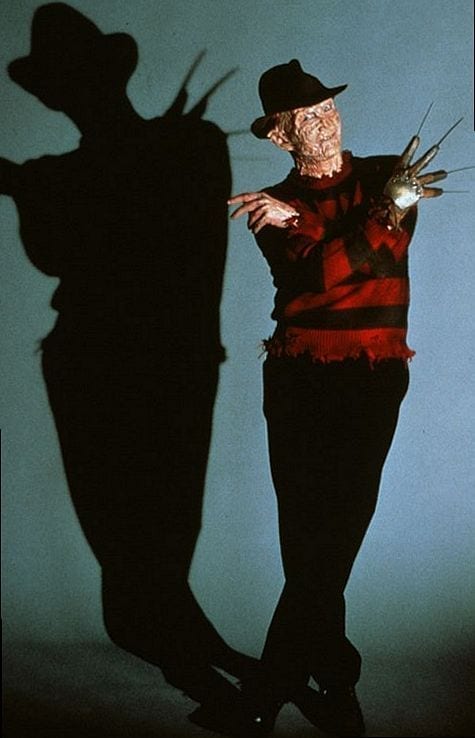 When it comes to horror icons, few characters come close to Freddy Krueger (Robert Englund). His sweater and bladed-glove combo stick out like a technicolor villain that only kids could dream up as the boogeyman. Craven takes the step of not endowing him with a supernatural background, instead of giving into elements that would have made the story easier to tell. Krueger was once a person with twisted desires and brutal pleasures; in retaliation for his crimes, the adults of Elm Street offer their own vigilante justice to his demise. The burning fires of their revenge give Krueger the unimaginable power he was unable to attain in the real world—now he can transcend the mortal bounds. He was off to a nightmare of the parents’ creation and the devastation falls solely on their offspring. In that respect, the nightmares and Krueger himself represent the end of innocence and the harsh fact that children are always paying for their parents’ decisions. After all, every town has an Elm Street—why would any of them be any different.

The American dream was becoming a suburban nightmare in the ‘80s; as decadence grew, the nightmares only seemed to get stronger. That very sentiment makes the film’s focus on consistently evolving dreamscapes the perfect device to critique everything from perceptions of youth to social inequalities. More importantly, using nightmares as the storytelling devices give filmmakers full license to explore without limits; the characters could be instantly transported to any setting and into any storyline. It was both a way to push limits of how to remove someone from the plot and a chance to go well past the bounds of reality.

Which nightmares mean the most to the story? Which ones are crucial to the series’ popularity? It all depends on who you ask; that in and of itself may be the true sign of how audiences received each film. Whatever is the viewer’s “Achilles heel” would spark the imagination or send them to a darker place. There is something to be said for the constant one-upmanship that seems to accompany each title. Not only is it a competition to entertain viewers, but it is also a battle between the filmmakers themselves to see who could come up with the next memorable kill.

Not all deaths are created the same in this nightmare universe; while some may have forgone immortality for the occasional glimpses on late night viewings, others have made a niche for themselves. Along the way, they have something to say about some surprising and not so surprising subjects.

Before superheroes were thought of as the mainstream form of entertainment, it was easy to take a few shots towards both the creators as well as those readers enthralled with them. The death of Mark (Joe Seely) may be nothing more than a cruel joke, but there’s something else to take away from the comic book world. Pop culture influences are always a key part of Nightmare’s storytelling devices. Keep in mind Nightmare on Elm Street Part 5: The Dream Child was released the same summer as 1989’s Batman; whether the filmmakers were consciously anticipating the ripples created by the film or whether it was pure coincidence, the sequence takes on a special meaning for its release and the changing signals that geek culture was no longer ostracized but embraced. 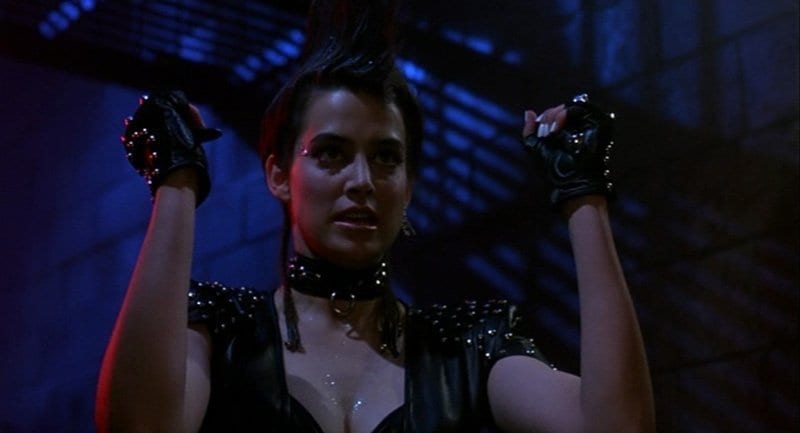 In terms of disabilities, horror has not always been so accommodating. This series of films actually takes on both mental and physical conditions. Everyone’s fair game for Freddy. A Nightmare on Elm Street 3: Dream Warriors (1987) deals with both in surprising ways; the nightmares speak to the teens’ concerns and the suicidal thoughts that brought many to this place. Ever the bully with a blade, Krueger exploits the sensitivities with pleasure. Taryn’s (Jennifer Rubin) death offers one of those constantly shifting lines between reality and nightmares. Her addictions have left her locked away— far from the person she aspires to be. In one of the film’s sad truths, Taryn is consumed by the very addiction that she hoped to beat. It’s a brutal reminder from Krueger that you’re never truly free of the demons from your past.

Does This Make You Laugh?

Humor is one of the oddest and most embraced aspects of the series; while some fans appreciate the extremely dark attempts at a laugh, others long for the time when their Freddy was more kill and less clown. More than puns, the films use strange nightmare devices to bring humorous interludes to the story.

Sometimes the elements are purposeful, like the Freddy’s Dead: The Final Nightmare (1991)  appearance of actor Johnny Depp (formerly Glen in the first Nightmare) in a parody of anti-drug ads. On other occasions, the humor may well be on Krueger himself. In that same scene, a video game plays a part in another demise; the graphics are decidedly stuck in a time period and gadgetry that only harkens back to console gaming’s early developments. That’s the paradox of these nightmares— dark humor playing out from the mouth of a former child molester and current serial killer who somehow wants to be the star of someone’s reality. Not exactly a comedic situation, yet a viewer might laugh anyway, knowing it’s wrong or maybe indulging in the practice of laughter to hold fear at bay.

A Nightmare on Elm Street remains a defining series in horror culture; much of the reason for its success and position in pop culture are the nightmares that frame every kill. More than the standard slow-walking stereotypical killer with determination and daggers, Freddy Krueger operates on a plane that is unavoidable for any of us—he truly is our dream killer.