I recently had the pleasure of speaking with actress/filmmaker Deborah Voorhees about her upcoming film, 13 Fanboy, the Friday the 13th series, her role in Part V, real-life stalkers, and more! This was a really fun conversation and I’m really looking forward to 13 Fanboy. Be sure to check out the social media links at the end of the interview!

Andres Grevas: Where did the idea for 13 Fanboy come from?

Deborah Voorhees: I wrote this with my producing partner, Joel Paul Reisig and he and I were discussing other potential projects. He, just out of curiosity, asked what it was like going to horror conventions. I told him that they’re fun and that the fans are really sweet but he wanted to know if there was ever a scary moment. He’s not in the horror world so he really didn’t know what it might be like. I explained that the conventions were fun. You visit and you talk and that horror fans are really down to Earth and nice. However, there have been a few instances online that kind of unnerved me. One time I received a message on Facebook messenger that said, “Wouldn’t it be cool if you died in real life like you did in Friday the 13th?” I blocked that person and didn’t have any other incidents for a while. I found out later that other people from Friday the 13th films had that same message. Was it the same person, was it a fan, was it someone trying to be funny? I don’t know but I didn’t find it very funny.

Then another time I was getting a series of text messages and that really unnerved me because it was my personal phone. They claimed to know who I was, where I lived, and to be watching me, that they knew me from Friday the 13th and meant me harm. I blocked them and it stopped but it did get to me. When I told my producing partner all of this he said, “This is a movie”. The chills went up my spine. This was real life, this is scary shit. Slasher films aren’t scary because nobody thinks that’s really going to happen. This is real life. I paced the floor for the next few nights, couldn’t sleep, and realized that if I was this scared, I could scare other people and this was a really good idea. This film is just as much inspired by a film like Cape Fear as it is slashers. We’re taking the horror kills, the intensity of films like Cape Fear, and the mystery element because, in this film, you won’t know who the killer is until the end. We’re really mixing three genres. 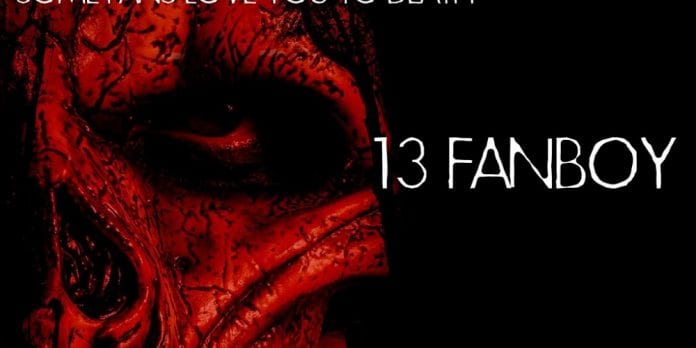 AG: You have a lot of Friday the 13th alum as cast members in this film. What was it like explaining the concept to them and what were their reactions like?

Voorhees: For the most part, it’s been an overwhelming “Oh my God, why hasn’t someone done this before” reaction. Jennifer Banko, from Part VII, said the only reason it hadn’t been done before was because we were waiting for you to do it! [laughs] Thom Matthews read the script and said he couldn’t believe the twists and turns. There were a few that said not a chance, it’s way too scary and they weren’t going there. People are playing a fictionalized version of themselves and I think that adds a level of intimidation. Think about it, they aren’t playing a character that gets killed in a movie, they’re going as themselves and that adds a level of intensity. It’s been very interesting to see all of the different reactions. I did think of stalking to be a fairly rare thing but once I started talking to actors from the series, there were several of them who had experienced several stalking issues. I wouldn’t call mine severe, I would call it a mild issue. I had experienced more severe stalking as a teenager but it wasn’t related to Friday the 13th. Some of the actors have had some really intense, scary times.

AG: That was going to be my next question, stories about other cast members’ experiences with stalkers.

Voorhees: Oh yeah, several people just asked if we could do a comedy instead or something less real with the Jason character. Of course, there are all kinds of issues with getting the rights to do a Friday the 13th film. Right now, we’re still kind of in a holding pattern with that but I’m confident we’ll get it all worked out. This is something very different though. We do hope to have it as a series in its own right. It will have similar feelings in some ways. One of the things horror fans really want is to see the actors brought back. This film does that. It will also have older style effects, no CGI. We’re giving horror fans what they want but also adding that edge of your seat, thriller aspect. This isn’t going to be jump scares, followed by giggles. This is going to be something more like Hush, that has me looking around me and makes me feel paranoid. It has a different feel to it.

AG: Your script is written and the film is mostly cast, correct?

Voorhees: There are some smaller roles still to cast but it’s basically cast. We have Dee Wallace as our lead and a young woman named Hayley Greenbauer as another lead. She and Dee will be in several scenes together. Of course, we have many Friday the 13th people such as Tracie Savage, Judie Aronson, Thom Matthews, Kane Hodder, CJ Graham, Ron Sloan. Corey Feldman is going to do a special appearance for us. It’s larger than a cameo role. We’re super excited about it. I know fans don’t want a remake and this definitely isn’t a remake. It has all the elements fans have been asking for and it gives them something different.

AG: Production-wise, where are you at currently?

Voorhees: We’re in pre-production still. That’s a time of tremendous logistical issues. Getting your actors in the right place and getting a schedule worked out. Matching up everyone’s availability and a lot of logistics. We’re also still location scouting and we do have a bit more fundraising to do. We’re doing really well lining up investors but we still have some more to do. I can’t commit to locking down dates for beginning to shoot the film or its release yet but I am hoping we can begin shooting in June with 2020 targeted for release. I’m not in a place where I can say that will pan out though.

AG: What other details about the film would you like the general public to know?

Voorhees: This is a film that will end up in theatres. We have several distribution companies that are very interested in it. It’s not going to be straight to home video or anything like that, it’s a theatrical release. We feel like we have a product that fans are going to really gravitate towards. We’ll ideally release either on Halloween or on a Friday the 13th if we can, depending on how those negotiations go. We do have our Indiegogo campaign still going. It’s technically done but people can still get their names in the credits. I also have a horror group on Facebook called “Deborah Voorhees Shear Horror” spelled like garden shears because that’s how my character died. We hope fans want to be a part of the making of this film. We have musicians, visual artists and all kinds of talented people who will be a part of the film. We’re going to be casting fans for the horror convention scene in the film. There are all kinds of opportunities if you want to be involved. Don’t be just a consumer, be an active participant. This is a film made for fans.

AG: Thank you so much for your time today. Would love if we could end the interview with a humorous or memorable off-screen moment from Friday the 13th: Part V.

Voorhees: My pleasure! One of the funniest things I remember from being on set was the lunch line. We were making a slasher so there in the lunch line, you have Dominick holding his arm, Ron Sloan holding his head, someone with a gash. People eating hamburgers with their heads next to them. I remember just laughing and shaking my head.

If you enjoyed this interview, please be sure to check out some of our others!