The case of Poltergeist (1982) is a strange and unique one filled with mysteries in front of and behind the screen. To begin with, a debate still rages regarding who really directed the movie—Tobe Hooper, who was credited as the director, or Steven Spielberg, who concocted the story, co-wrote, and co-produced the movie. Then there’s the infamous “Poltergeist Curse” referring to the deaths of the film’s two young actresses under tragic circumstances. Perhaps most curiously, Poltergeist is a satirical critique of American suburbia, its values, greed, and capitalism which also happened to become one of the most profitable horror films ever released.

It’s no accident that Poltergeist opens with “The Star-Spangled Banner” set to extreme close-ups of flickering, hypnotic images from a TV program signing off for the night. Neither is using television as a corrupting influence and a source through which poltergeists move from another dimension into that of the Freeling family—fresh residents of the newly developed Cuesta Verde, a seemingly idyllic planned community in sunny California. The opening credits feature wide, flattened shots of the neighborhood filmed with a telephoto lens—exaggerating the homogeneous, conformist nature of the development with same-looking houses stacked on top of each other, yet scattered with large skeletal trees that suggest a malevolent presence. The feeling of suburban safety and comfort is yanked from underneath the family, when the youngest daughter, Carol Anne (Heather O’Rourke) gets kidnapped by that very presence and the Freelings, with the mother Diane (JoBeth Williams), as their de facto leader, must come together to save her. 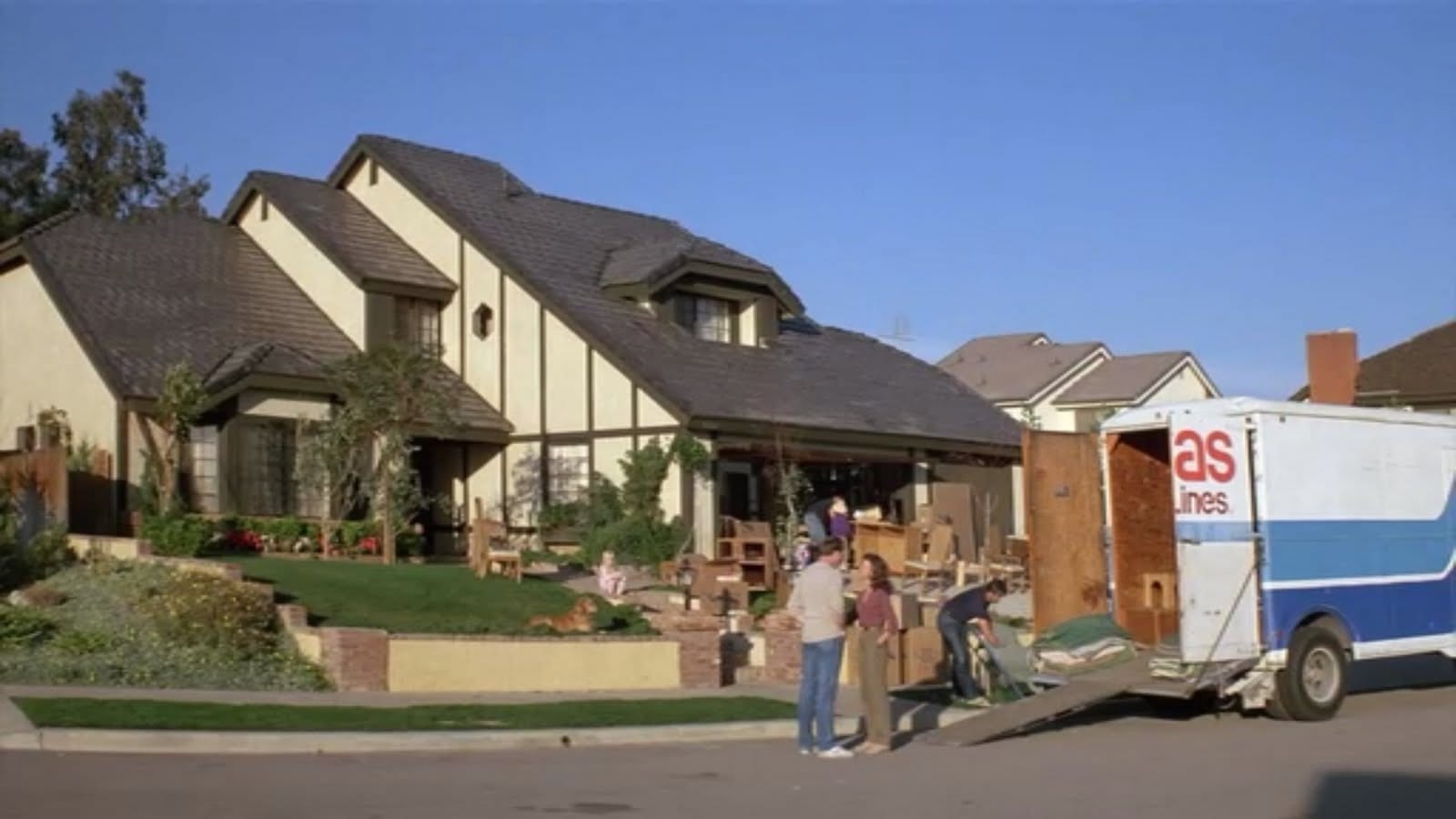 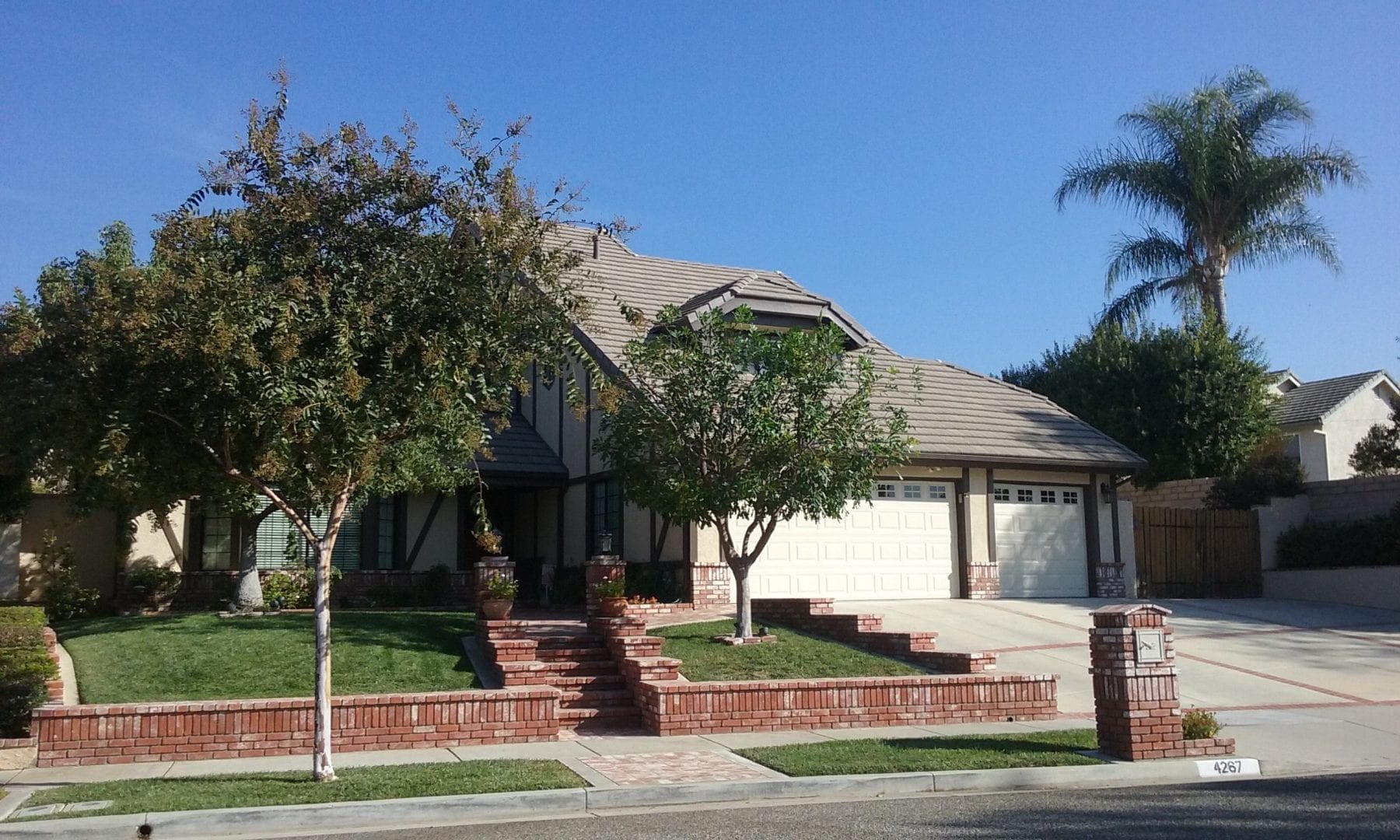 What we discover is that the very cause of Cuesta Verde’s haunting lies underneath its foundation— a burial ground from which the corrupt, greedy developer merely moved the headstones but left the bodies behind. In this way, the punishment for the Freelings, whose father Steven (Craig T. Nelson) works for the developer and has thus inadvertently prospered from his company’s underhanded business practices, becomes the punishment for the entire United States and its bloody and violent history. In Eaten Alive at a Chainsaw Massacre: The Films of Tobe Hooper, John Kenneth Muir points out that the film concludes the “only way to get rid of the nasty spirits in Poltergeist is to throw away your ‘tainted’ material wealth (your house, your belongings, your television set) and reject the values of a culture obsessed with greed.” This idea is presented in the film’s ending as the Freelings move to a roadside motel and immediately roll the TV out of their room—the family becomes the antidote to the capitalist society. They no longer have a home or any material things, but they have each other and that’s what really matters—or so the movie seems to suggest.

A public debate regarding directorial credit doesn’t occur all that often, even in a credit-starved place like Hollywood, so “Hooper vs. Spielberg” is quite an anomaly. According to Douglas Brode in The Films of Steven Spielberg, Poltergeist’s story creator couldn’t direct it himself because a clause in his contract with Universal prevented him from doing so while preparing E.T. the Extra-Terrestrial, yet the reports say he was on set virtually every day.

The controversy eventually reached the Directors Guild of America, which opened an investigation into the film’s authorship and caused Spielberg to issue an open letter to Hooper in The Hollywood Reporter: “Regrettably, some of the press has misunderstood the rather unique, creative relationship which you and I shared throughout the making of Poltergeist. I enjoyed your openness in allowing me, as a writer and a producer, a wide berth for creative involvement, just as I know you were happy with the freedom you had to direct Poltergeist so wonderfully.”

The reports from the cast and crew are conflicting. Zelda Rubinstein (who memorably played the medium Tangina Barrons) claimed in a 2007 interview with Ain’t It Cool News that Spielberg “directed all six days” she was on set and that Hooper “allowed some unacceptable chemical agents into his work.” However, James Karen (who played the developer, Mr. Teague) said in a 2012 Rue Morgue article that “Tobe had a hard time on that film. It’s tough when a producer is on set every day and there’s always been a lot of talk about that. I considered Tobe my director. That’s my stand on all those rumors.”

Perhaps it’s fair to say that the film was a collaboration between the two men. After a meticulous shot-by-shot comparison of formal directorial stylistic elements like shot duration, size, angle, camera movement, etc. between Poltergeist, Hooper’s Salem’s Lot (1979), and Spielberg’s E.T. the Extra-Terrestrial (1982), Warren Buckland in Directed by Steven Spielberg: Poetics of the Contemporary Hollywood Blockbuster deduces that Poltergeist has more in common with Hooper’s style and is thus truly his film. There is a caveat; Hooper’s style is more apparent in pre-production and production stages, whereas the movie deviates from it “primarily in the post-production stage of editing, where large-scale shots have been trimmed to fit Spielberg’s style,” perhaps giving some truth to the rumor that it was Spielberg who supervised the film’s post rather than Hooper.

On the other hand, Muir focuses on the film’s narrative themes and ideas as proof of Hooper’s authorship—primarily indicating the film’s satirical undercurrents. Though he clearly acknowledges Spielberg’s “dynamic, powerful influence over Poltergeist as its co-writer and producer,” he determines that the movie is way “more ‘down’ on American pillars (like government, commerce, the family, suburbia) than Spielberg would likely permit.” In addition, the movie’s most gruesome scenes, like the one in which a character peels his face off or the one in which maggots push a steak across a kitchen counter, fit right in the wheelhouse of Hooper—the director of the seminal slasher The Texas Chain Saw Massacre (1974). Finally, the ending, though ostensibly victorious for the now-homeless Freelings, offers a more uncertain feeling—eschewing Spielberg’s resolutions that usually prefer comfort and reassurance, sometimes to their own detriment.

Upon its release, Poltergeist received generally positive reviews and became an enormous commercial success earning $76.6M ($235M adjusted for inflation), no doubt helped by its PG rating (Parental Guidance suggested, but not required) by the Motion Picture Association of America. How this movie with the above-mentioned gruesome scenes, let alone the scene of Diane and Steve smoking weed, managed to secure this rating is also open to debate.

Initially, it received an R rating, requiring an accompanying parent or adult guardian for those under 17 (A PG-13 rating that requires the same for those under 13 wasn’t devised until 1984). Spielberg and Hooper succeeded in their appeal to change the rating to PG, thus assuring a wider audience. Was it Spielberg’s influence in the entertainment industry that helped reverse the decision? As with many other parts of Poltergeist’s lore, the answers remain indeterminate. For example, the film’s DVD and Blu-ray releases include no commentaries or documentaries on the film itself, nor is there a book devoted to its making, as if its creators would prefer not to talk about it. 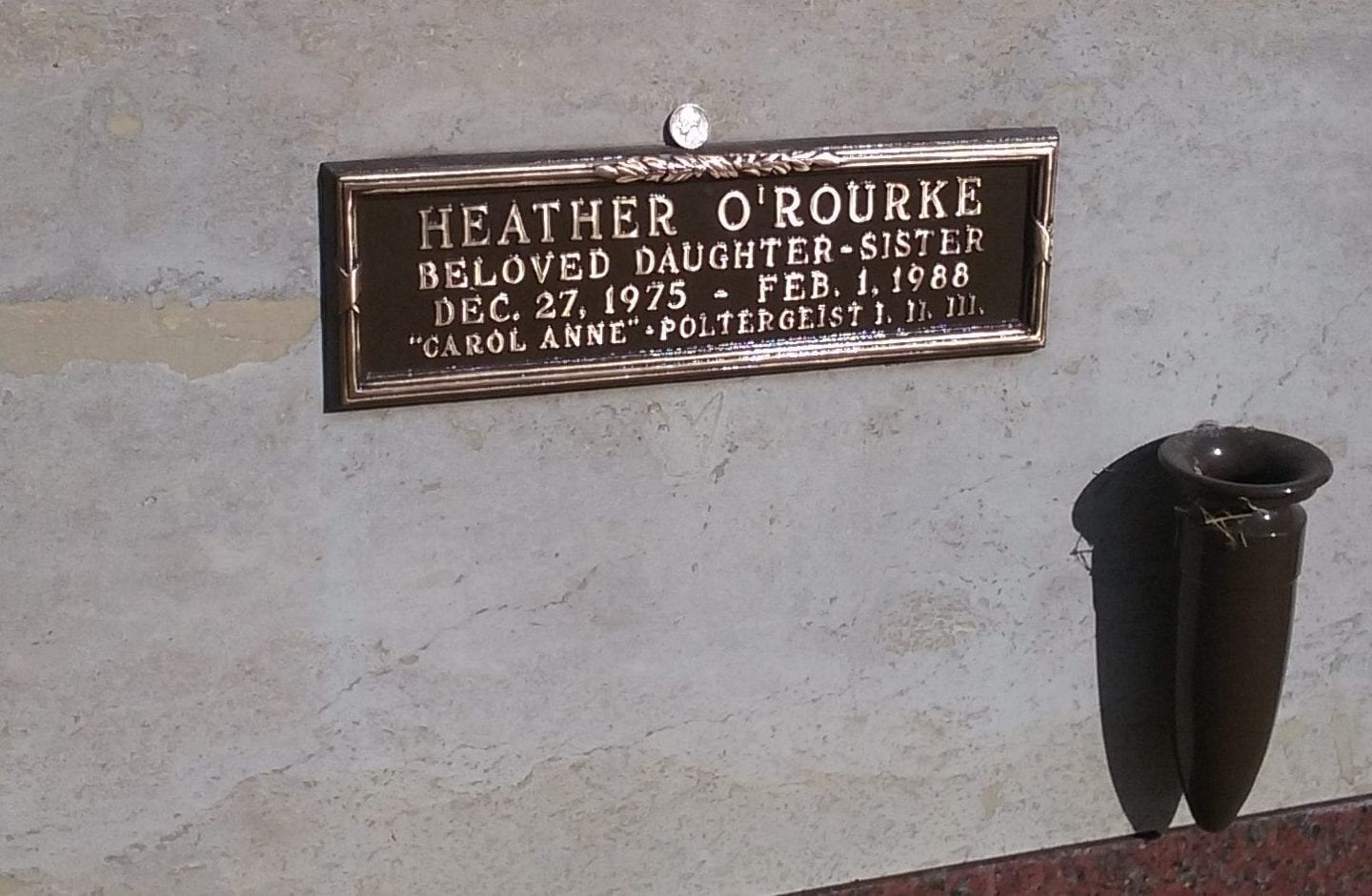 The so-called “Curse of the Poltergeist“—which even had its own E! True Hollywood Story—refers to the untimely deaths of O’Rourke and Dominique Dunne, who played Carol Anne’s older sister, Dana. Only a few months after the film’s release in 1982, Dunne, 22, was strangled by her former boyfriend, who shockingly ended up only serving three years in prison. O’Rourke died in 1988, at the age of 12, due to an acute bowel obstruction caused by congenital stenosis. Some go as far as to blame the supposed “curse” on the alleged use of real skeletons in the scene where Diane comes face to face with the cemetery’s dead bodies surfacing to the top of the muddy, unfinished pool in the Freeling backyard. Whether the skeletons were real or not is yet another of film’s enigmas, it was confirmed by JoBeth Williams and special effects makeup artist Craig Reardon, but not by Spielberg or Hooper, who passed away in 2017 at the age of 74.

Poltergeist has stood the test of time to become one of the most renowned and popular films of its genre—even leading to two sequels and a remake—while at the same time being critical of society’s materialism and obsession with expansion at any cost. The irony can’t be more obvious; the influence of television in the ’80s has transferred to the Internet but the film’s themes are even more relevant today, especially after the financial crisis of 2007-2008. I’d argue the film’s continued relevance stems from its satirical aspects—those more aligned with Hooper’s pursuits—and they are what makes Poltergeist stand out in the horror genre and what gives it its longevity, nearly 40 years since its release.