Slasher movies still exist, sort of. There’s Hatchet, You’re Next, Scream — all films categorized within the slasher genre (albeit made after the 1980s). But they aren’t the same anymore, are they? That isn’t to call modern slashers bad, they’re just different now. The closest movie I’ve seen to channeling the atmosphere of an ’80s slasher movie—post-golden era—is Ti West’s House of the Devil, which isn’t really even a slasher movie. But it somehow captured the essence about as well as a modern movie possibly could. There are all manner of throwbacks to that magical era, Behind the Mask for example, which is an excellent watch.

But entertaining as it is, similar to sugar and sex, there is no substitute for the real thing. We can always tell the difference.

With that said, it’s time to list my personal favorite ’80s slasher movies. Obviously, movies like Halloween, Black Christmas, and Psycho will be excluded from this list, as they came out prior to 1980 (genre-defining as they are). This may seem like it should go without saying, but unfortunately, that’s just not true. Try writing online articles on a regular basis and you’ll quickly realize absolutely nothing ever goes without saying.

Furthermore, it should be noted these are just my personal favorites. That doesn’t make them the best. Is The Devil’s Rejects a better movie than The Godfather? The answer is an unequivocal ‘no’,  but I still prefer the former. I suppose there’s no accounting for taste.

So, without further ground padding, let’s get into my favorite ’80s slasher movies. 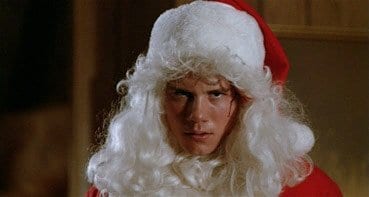 There’s little more I can say about Silent Night, Deadly Night that I didn’t say in my 2500-word review? It’s just a perfect movie for its place in time.

A team of nuns running an orphanage ostensibly attempt to draw blood from a Real Doll in their attempts to make Billy grow into a normal, healthy human being. As would be expected, the ship on Billy’s sanity had not only sailed, it also hit an iceberg and sank to the bottom of the ocean. Billy ultimately grows up to be the very monster who created him: a psycho-killer Santa Claus.

Holiday horror is so much fun and Silent Night, Deadly Night is a prime example. Parents were livid, children were scarred, perfectly good boobs were ruined by a set of deer antlers…what more can be asked of a film? Those are all major cinematic achievements in my book. 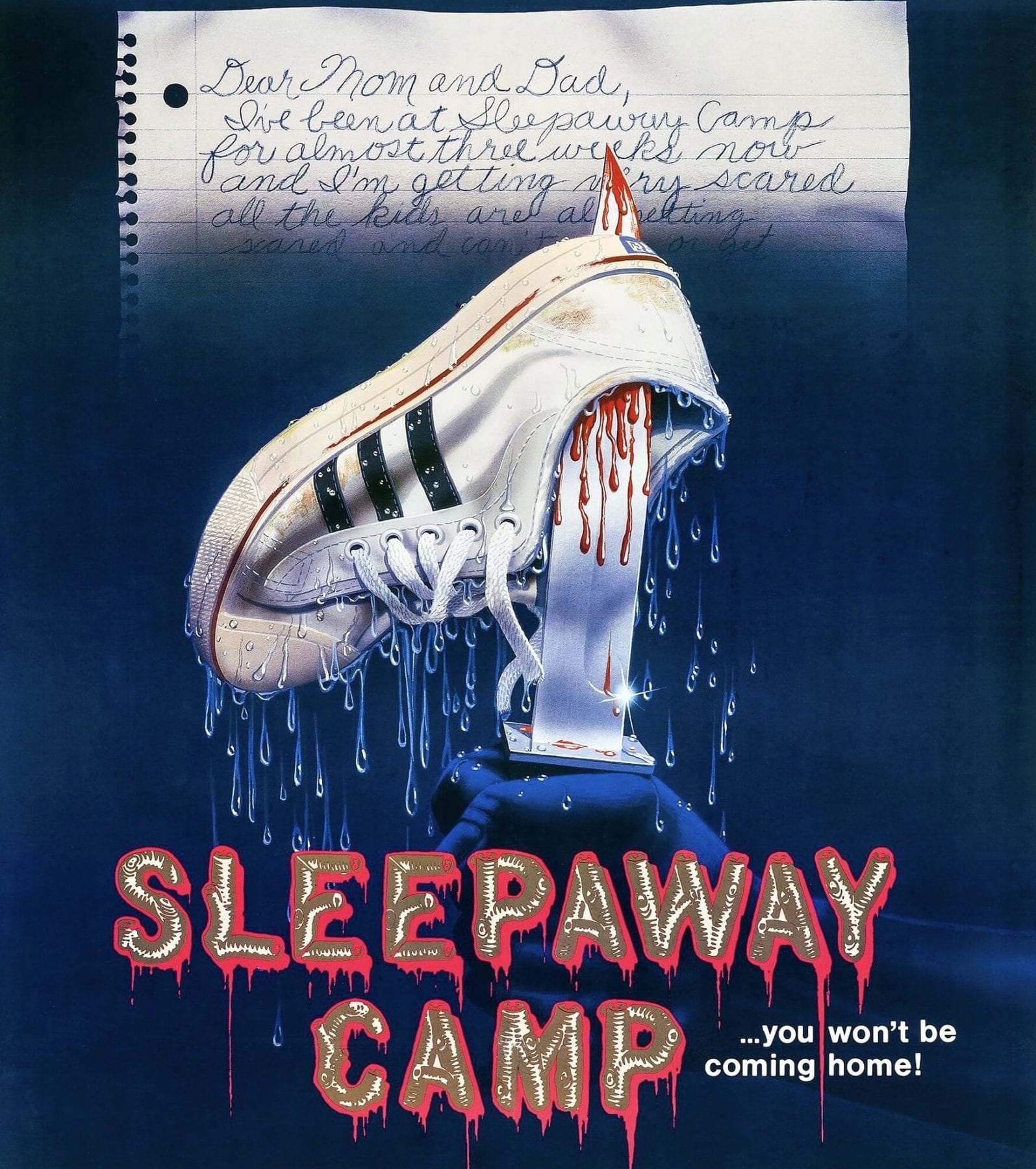 This is another controversial title, but for more legitimate reasons than Silent Night, Deadly Night.

As much as I’d like to say no, the big ‘horrifying’ twist of the movie is the revelation of a ‘girl’ having a dick. Listen, I believe in plain speaking. I’m a hard line liberal with zero tolerance for bigotry—but I’m not into sterilizing my words, so I’m going to put this as I see fit. If people want to crucify me, Lowe’s has cheap lumber and nails, and I’m not hard to find.

The contents of your underwear are of no concern to me. Whether you have a penis, vagina, a little of column A and B…or even a fleshy blank mound of skin like Alan Rickman had in Dogma, I don’t give a shit what you’re packing. That sort of thing doesn’t factor into how I form opinions on human beings. If the identification of your genitalia does somehow become pertinent to my life, then I’ll ask. But, regardless of the answer, you’ll get no judgment from me.

Not that it makes my opinion any more valid—after all, I’m a cis white man, so what the hell would I know about being a persecuted minority?—but for the record, some of my best friends are trans and I have absolutely no clue what their genitals look like. Nor do I care to know.

I consider that to be simple common decency, but apparently, I’m an exception in my apathy toward undie contents. I’ve literally seen people ask my trans friends questions about their genitals and wondered where someone procures that level of tactless audacity. People can identify however they like. Tell me what to call you, and I’ll call you that. Or I’ll make up a nickname as I do for all of my friends. Which brings me to this movie and why I’m praising it.

How can I, being such a progressive, love movies like Sleepaway Camp or Silence of the Lambs? It comes down to feeling secure in my own morality. I’m not transphobic, I’m not friends with anyone who is transphobic, and I can watch movies or listen to music that isn’t in line with my way of thinking. Because I know that times were different back then and that there’s not a damn thing I can do to go back and change it.

We simply cannot undo the ignorance of prior generations.

For that matter, I also own the Criterion Collection copy of Rosemary’s Baby and I watch it regularly. Roman Polanski is someone who committed horrifying acts and I don’t condone him or his actions in any way, shape, or form. But if I said I didn’t like Rosemary’s Baby anymore because of his crimes, I’d be lying to you and to myself.

While Sleepaway Camp has a troubling implication in its final moments, that scene is far from the reason I love the movie so much. I love Sleepaway Camp for its campy premise, it’s over-the-top acting, and the strangely profane dialogue delivered by young children. It’s hilarious to me, watching ten-year-old boys sit around cursing like sailors, calling each other “cocksuckers,” and using other swears children typically don’t employ. It’s something to behold.

Scenes like a pedophile being burned alive in an absurdly large pot of boiling water, the murder of an innocent child camper by a derelict counselor…Sleepaway Camp is over the top and just fun a hell to watch anytime.

I’d also argue that the revelation of the dick is less horrifying than the implication stemming from it. If you have any shred of common sense whatsoever, you already know this isn’t a movie about a member of the trans community.

This is a movie about a little boy whose mother forced him to live his life as a girl. There’s a huge difference between the two. While the transgender community is hardly something to be horrified by, sick parents forcing their children into gender roles they don’t want to assume is genuinely scary, and even a thing that happens in real life.

Just some food for thought. 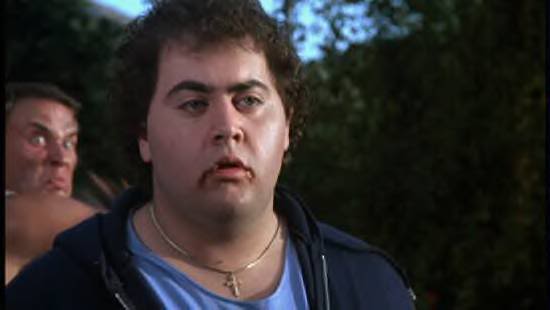 So Tommy Jarvis is all grown up after killing Jason Voorhees, and he’s mentally unstable, residing in a halfway house of sorts. Just when it seems like he’s ready to go back to some semblance of normalcy, Jason shows up and starts cutting people up again.

Friday the 13th Part V: A New Beginning gets a lot of flack because the final scene reveals it’s not really Jason stalking the victims, but rather, a copycat. You know what? No, it’s not. It’s not a copycat. Sure, the mask has blue markings instead of red, and it’s technically canonically true that it’s a copycat. But those facts aren’t terribly important to me. In my mind, it’s still just Jason. I simply can’t see the killer in Friday the 13th Part V as anyone but Jason Voorhees.

Also, let’s not forget that Part V has two of the best non-Jason aspects of the entire series. For one, the spine-axing of Joey is more satisfying than it has any right to be; everyone found that guy unbearable, and they damn-well know it. Which is quite an achievement, considering he had less screen time than Jamie Lee Curtis in Halloween: Resurrection. Every moment of his presence I find myself screaming at the television, “Wipe that shit off your face, you needy butt-puppet.”

Finally, Joey promptly receives the perfect cure for his unbearable personality in the form of an ax directly to the spine. Perfect.

Vic, I’m sorry you went to prison, but you did the world a service. Joey made Shelly from Friday the 13th Part III seem like Uncle Jesse. Facts.

Also, lest we forget Ethel and Junior, some of my favorite characters in the whole franchise. Friday the 13th Part V is goofy, campy, and has a ridiculous ending. So, naturally, it fits right into the franchise perfectly. It’s always my first choice when watching a Jason movie, followed closely by the ironically not-so-final, Friday the 13th: The Final Chapter, another great in the list of ’80s slasher movies. 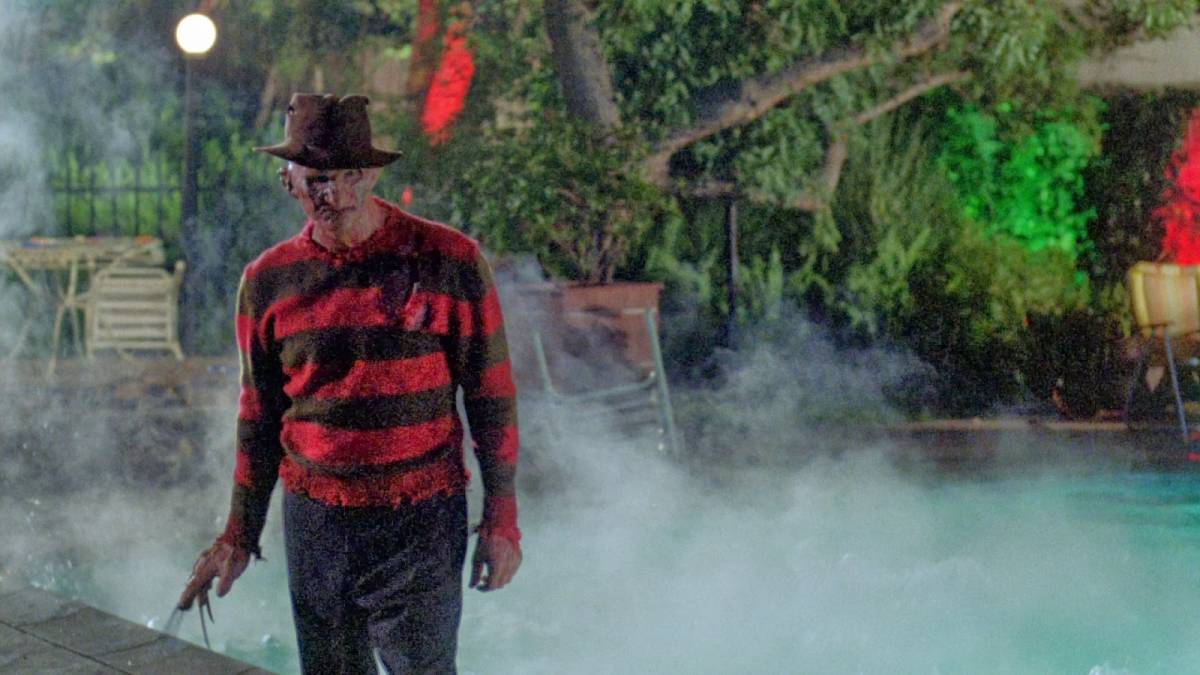 Jesse is a teenager coming to terms with the realization that he’s gay. While that is never explicitly stated in the film, the filmmakers have all confirmed this (watch Never Sleep Again if you don’t believe me). He’s a new kid in a new town and has moved into the house previously inhabited by Nancy Thompson.

Freddy Krueger begins haunting his dreams, birds explode for no good reason, dance sequences occur sporadically, and much homoerotica ensues, despite Jesse’s best efforts to be attracted to women.

In truth, it’s kind of a profound and surreal statement about what teens go through in those situations.

OK, you didn’t read the intro, because no one reads the intro to list posts. I know that everyone knows that, so I’ll reiterate.

But A Nightmare on Elm Street 2: Freddy’s Revenge is my personal favorite of the series for a couple of reasons. The main one being: it’s the first Freddy Krueger movie I ever saw. I was seven years old and it came on TBS or USA or some other such channel. You know, the kind of channel that doesn’t really have a theme of any kind. Sometimes they show horror, sometimes sports, sometimes Looney Tunes. I don’t get it, but I’m also not a network executive, so what do I know?

Freddy’s Revenge was my introduction to the single best horror villain of all time. Freddy Krueger isn’t part of the ’80s, he is the ’80s.

The first time I saw Freddy coming out of Jesse’s body, something changed in me. I was beyond traumatized. At eight years old, that kind of scene will haunt you for the rest of your life. Now I’m grown and less scared of the body emergence and more entertained by the extremely heavy-handed gay overtones present in Freddy’s Revenge. Let me just say, anytime you can mix Freddy Krueger with introspection about budding sexuality, I’m going to consider you a master of modern filmmaking. Full stop.

Extra points for the legendary Clu Gulager showing up in this movie. 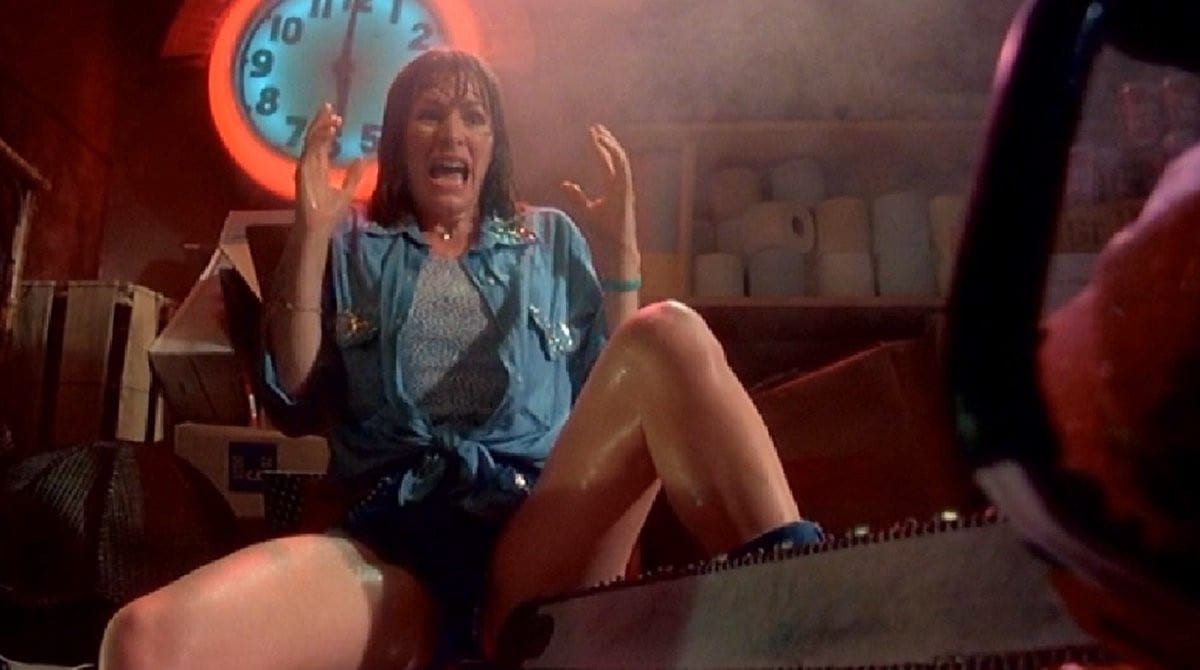 Lefty is a no-nonsense cop who is dead-set on avenging the murder of Sally and Franklin from the original Texas Chainsaw Massacre. Why anyone would want to avenge Franklin’s death is beyond me.

Texas Chainsaw Massacre 2 is as over the top as its predecessor was hyper-realistic. A fever dream of horror camp and cinematic brilliance.

The Texas Chainsaw Massacre 2 will forever go down as my single favorite ’80s slasher movie. It’s without a doubt, the most ridiculous movie ever made, and I watch it at least three to four times per year. Rest in peace Dennis Hopper, Tobe Hooper, and Lou Perryman.

So that’s enough about me. As always, we at Horror Obsessive want to hear from you. What are your favorite ’80s slasher movies? Let us know!