I saw one trailer for Summer of 84, the Shudder exclusive film and immediately I knew I was going to watch the hell out of this movie and that was even before I knew Francois Simard, Anouk Whissell, and Yoann-Karl Whissell directed the film—the same directors that brought us Turbo Kid in 2015. Summer of 84 follows 15-year-old Davey Armstrong (Graham Verchere) and his painfully pubescent pals, as they try to determine whether or not Davey’s neighbor Mr. Mackey (Rich Sommer) is a crazed serial killer disguised as the friendly neighborhood cop. This film, like all films, has both positive and negative aspects and I’m here to rip those aspects apart limb from limb.

This film, while definitely enjoyable especially if you have a yearning to remember the time of windbreakers and paperboys, has a problem with being offensively predictable. Within 10 minutes you know without a doubt that Mr. Mackey is indeed not just your average cop. While average cops are often scary enough, the film puts the audience in the position of having to scream at the screen for Davey to get the hell out of Officer Mackey’s basement. I had intense Silence of the Lambs flashbacks as Mackey persuaded Davey to help him move furniture down to his seedy basement complete with ominously padlocked doors, with the promise that he would pay him for his monthly paper route. As Davey gets to leave Mackey’s house unscathed and with all of his bowels still in place, I think we’re supposed to feel some sort of false security and hope that Mackey is going to turn out to be the film’s hero. The problem with that is, Davey is clearly the film’s protagonist, so if Mackey were also a good guy, the film would be without a plot. I guess having grown up in the ’90s with “Stranger Danger” literally being the tagline of my youth, I have a hard time accepting anyone going willingly into someone’s basement, even if it is their neighbors. To be frank, if anyone of my neighbors asked me to move furniture into their basement for them at 15, I’d have pretended to hear my mother calling me home for dinner.

Knowing full well that officer Mackey is shady isn’t the film’s only moment of predictability and missed opportunity though. Some of the things that bothered me had to do with who died and who didn’t. Dale “Woody” Woodworth (Caleb Emery), Davey’s heavier set friend did an amazing job of being a believable regular teenager, sadly dealing with a mother who works a lot and apparently has a bit of an alcohol problem. I knew this kid was going to die the moment we got a glimpse into his life and he became a sympathetic character, I knew he was headed for the axe. That bothered me a lot because there were so many other avenues the film could have taken.

For instance, I got a bit excited as Tommy “Eats” Eaton (Judah Lewis) sat on the bus stop bench, acting as a lookout for his friends so they could finally break into Mackey’s basement and find out what is behind the mysteriously padlocked door. The film fakes you out and leads you momentarily to believe that Eats may be the friend in the gang that gets kidnapped, instead of what actually happens later. I was beginning to think we may get to see the rest of the gang go on a rescue mission to retrieve their stolen friend, but no, it was just Farraday (Cory Gruter-Andrew) jumping out of the bushes to scare his friend and call him a vagina (which I’ll admit did actually make me laugh). Another missed opportunity in the film was the entire character of Eats. Instead of him just being an insanely horny teenage kid, he obviously had actual problems at home, we only know that though by a 30-second scene where he walks out of his house crying as you hear what is presumably his parents screaming at each other. The scene teases us with character development, that never comes to fruition.

The film is nearly a coming of age story for everyone involved but no one ever really seems to reach the finish line. Really the ending of this film had me once again talking smack to my TV. Finally, Davey has broken into the basement and found concrete proof (dead bodies and whatnot) that Mackey is the Cape May Slasher and the cops have raided the supposedly escaped Mackey’s home. Davey and Woody watch the whole scene from the safety of Davey’s window. You and I both know that Mackey is hiding somewhere in the house, thanks to the foreshadowing of Mackey asking to come into Davey’s home and provide Davey proof that he hadn’t killed the boy who was previously seen in Mackey’s kitchen. The boy was actually his nephew and Mackey can give him a call and set Davey’s crazy imagination at ease yet is clearly scoping the place out, mentioning how much it’s changed over the years. The ending of this film is something I’m actually not going to gripe about because I found many parts of it enjoyable, so let’s move onto the things that I thought worked about this film.

Now I’m not just going to sit here and bash this film, because it did actually have things about it that I loved. There were little Easter eggs all throughout the movie that made me laugh quite often. The first one I noticed was right as the film starts to find its pace, as Davey and his friends are at the bowling alley, cruising chicks and playing video games. There is an out-of-order video game next to the one that Woody is playing that happens to be a legendary fictitious co-op game called Polybius that is supposed to cause terrible side effects such as insomnia, paranoia, hallucinations, and amnesia. I marked out a tiny bit when I saw its inclusion in the film.

Another Easter egg is that when Mackey goes on his nightly run to his storage unit to grab his murder-mobile, it’s a Volkswagen Beetle. The same type of car used by Ted Bundy, I’m going to go off my gut instinct and say this isn’t a coincidence.

Easter eggs aside, I was a huge fan of this film’s musical composition. Le Matos, a French Canadian group from Montreal did a wonderful job bringing the new ’80s feel we all seem to be consumed with currently. A film’s score is extremely important to me, and many others. You’ll find me hard-pressed to ever complain about some good old-fashioned ’80s synth-wave, full stop.

While predictability may have been a problem in Summer of 84, I did actually like the fact that you could relax while watching it, I wasn’t constantly wondering what would happen next and found myself lazily enjoying the nostalgic wave I was riding. The film is after all about kids being bored during the summer and trying to find a good adventure before returning to the inevitable doldrums of school life. The kids in this film did just that, they found a great adventure, sadly it ended up with one of them dead and the other scarred for life. I’m of course talking about the ending to this film. Mackey, as predicted was indeed hiding in the Armstrong house, and once everyone fell asleep—fueled with a specific kind of hatred and rage that only truly psychotic people can probably possess—descends from his attic hiding spot and kidnaps Davey and Woody. Mackey takes them to a secluded island and plays the boys’ most terrifying version of their favorite childhood game to date. 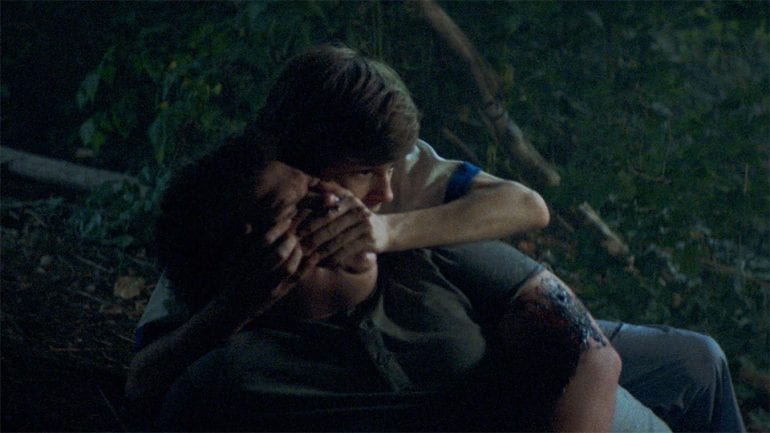 This is actually my favorite part of Summer of 84. Mackey doesn’t want to just kill Davey for finding him out, he wants to destroy his life, the same way Mackey sees Davey having destroyed his own. Mackey lets the boys run out into the woods knowing that they will see the dozen or so decomposing remains of other boys strewn throughout the forest and gives them a head start so he can play a game of cat and mouse. That actually had me alert and excited for whatever would come next. The hands-down best moment of the film is Mackey holding onto Davey almost in an embrace, telling him that he wants more than anything to just murder him on the spot but he knows he’ll get more twisted gratification in letting Davey go and try to live his life with the constant overwhelming terror in knowing that Mackey is out there, and he’s only going to bide his time and strike whenever Davey least expects it. I personally would have preferred the film to be this intense in its entirety. The film finishes with the end of summer and innocence, the gang’s childhood treehouse is torn down, one of their friends is dead, and the other is wounded and probably going to be in therapy for the rest of his life.

Summer of 84 is a dramatic loss of innocence story and while I did enjoy it, I felt there were some things that could have been a bit different but I can definitely see myself watching this film again. Have you seen Summer of 84 yet? If so, let us know how you feel about it!